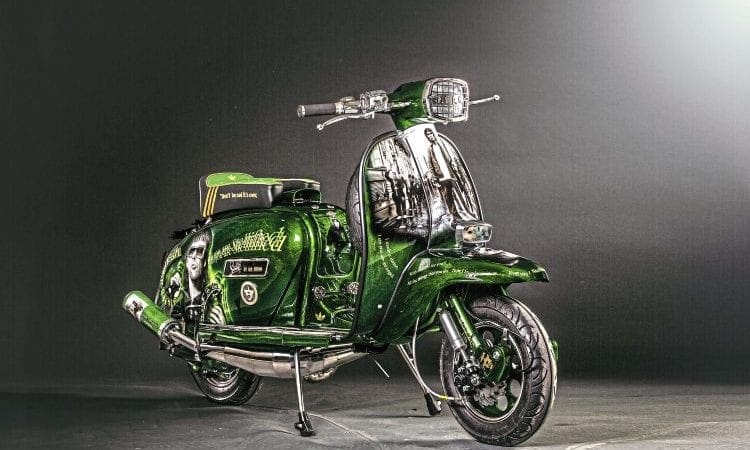 There are certain themes for a custom scooter that have been tried many times before requiring a fresh new approach to better them. This scooter does that… in spades.

The Stones Roses are a band who not only have acquired legendary status within the music world but also within the British scooter scene. When something as popular as that comes along it’s obvious some of its influence will rub off on to others. Within the custom scooter scene that is exactly what has happened, with several examples built around a dedication to the band. What if you are a lifelong fan though and you want to follow down that exact same road? Should you be put off doing so because others have been there before you? The answer is no, but in saying that… perhaps a different approach or angle is required, so as not to get lost among what has preceded your interpretation.

Ian Westmoreland not only grew up with a taste for the music of the Stone Roses but also for scooters. Coming from Scunthorpe, a hotbed for scooter customisation, it was obvious he would be deeply immersed into this vibrant and somewhat heavily contested scene. It is said if you are building a custom scooter in the area then it has to be better than anything previously seen. Fair enough but with hundreds of them already completed and many more in the pipeline that’s easier said than done.

Ian’s task wasn’t going to be easy and was made even more difficult by the choice of theme he decided to use: the Stone Roses. Knowing he needed to be different to create something new and outstanding, he decided to concentrate on the solo career of Ian Brown the band’s singer and frontman. The problem now was, how do you interpret a singer’s solo career into the theme for a custom scooter? The simple answer, take a couple of his inspirational songs and build a theme around them instead. With plenty to choose from, six albums’ worth to be exact, as well as a host of singles, there was plenty of scope. In the end, Ian Chose Stellify from the My Way album and F.E.A.R. from his third offering Music of the Spheres.

With the vision clearly and firmly planted in his mind, Ian now set about interpreting it on to the paintwork. This would be trusted to the skilled hands of Dave Dickinson but getting the idea across wouldn’t be easy. It was decided to use a backdrop of emerald green with black and white murals and lyrics from the songs in a light gold colour to make them stand out more. ‘Steilify’… which means change into a star is the principal idea and features mostly over the bodywork. Not only on the side panels but lyrics from the song appear on the leg shields and front mudguard.

As for F.E.A.R., that has its own set of artwork on another pair of panels that can be changed over depending on when Ian decides he wants. There is also a mural on the front mudguard relating to the song. Just in case you weren’t aware of Ian Brown’s long and illustrious career there are small allusions to much of his work portrayed all over the scooter. Many of these are by way of small steel work lovingly produced in fine detail. As you look around the scooter at each individual symbol or quote the story unfolds in front of you. It’s a great means of interpretation and he has nailed it to perfection.

There is obviously some chrome work and with the deep emerald green colour, the wheels and exhaust are offset beautifully. One thing that is not present is any engraving which usually goes hand in hand with this type of custom scooter. With so much going on though it would only complicate the design and possibly detract from the amazing artwork. In my mind, Ian has got this aspect truly correct and even though there is a lot going on it’s still a case of less is more if you know what I mean.

Once again the Snetterton designed seat takes its customary place and pays tribute to Ian Brown’s well-known love of Adidas trainers. Anyone who has followed his career will no doubt be aware that most of the time he is seen wearing a pair but it goes much further than that. There is an exclusive design of Ian Brown Adidas footwear actually marketed by the company. The subtle stripes down the side of the seat are all that is needed to mark the association with one of the world’s leading brand of trainers, a clever idea.

Keeping up with the rest

Through in the main this Lambretta is all about the artwork, that doesn’t mean to say what is underneath has been neglected. If you’re part of the Scunthorpe Lambretta fraternity then a tuned engine is an essential piece of kit, no question. Ian hasn’t compromised in any way and has fitted a heavily modified TS1. Not only does it feature a 62mm crank, pushing the capacity up to 238cc, but the casing and ports are nicely revised by regular writer for this magazine, Darrell Taylor. Having been built and set up by scooter sprinter Eric Cope the engine pushes out a tidy 32bhp which is plentiful when out on the open road.

For stopping power there is a front disc fitted. This along with a pair of BGM front dampers is adequate enough to give safe braking power when needed. There is a small rack at the rear but instead of the traditional shape it has been converted, telling another aspect of Ian Brown’s career by mean of a cleverly crafted plaque. At the front, there is a leg shield spare wheel holder and wheel fitted which doesn’t usually come hand in hand with this type of custom scooter.

There are times when this part of the paintwork can be a problem, arising from the bulge in the leg shields where it goes over the frame tube. Though many custom scooters feature a mural of some sort in this area they can often look strange depending on which angle you look at them from. By fitting a spare wheel this virtually takes up all of the inner leg shield space and is the perfect solution to the problem. It is finished off with a chrome and tastefully engraved wheel disc.

Unlike some ‘full artwork’ custom scooters, Ian intends to ride it to rallies and shows regardless of it getting dirty. There are a set of leather covers being tailor-made to fit over the paintwork and there is nothing wrong in protecting them this way. Paint like this doesn’t come cheap so any way of stopping it getting chipped in my eyes is essential. Ian never for a moment thought of using a vehicle to transport his scooter anywhere, saying that using a van is a definite no, so respect to him there. Once the covers are in place, expect to see it to see it at rallies and custom shows as he plans to use it as much as possible.

Getting the point over

For those that know the Stone Roses and Ian Brown’s solo career the scooter you see before you will be instantly recognisable. Easy to associate with, it no doubt bring back memories of his music. For those that don’t know him so well, it’s a quick insight into what he has done over the past 30 odd years or so, perhaps making you go and listen to what he has produced. I must admit I have never been a fan but after studying this scooter just for a few minutes it had that effect on me.

What that tells you more than anything is that the concept of this custom scooter works and works well. Even though it may be for just for a passing moment it has lured you into the world of his music by clever thinking and great interpretation. What Ian Westmoreland has done is create a unique custom scooter but also a story that you can’t help but take an interest in. If you have done that then you can sit back with a huge smile on your face knowing what you set out to do in the first place has been successfully achieved.

Name: Ian M Westmoreland
Job: HGV driver.
Scooter club & town: Scunthorpe Silhouettes SC.
How and when did you first become interested in scooters: My older brother was a scooterist so always interested but never had the money to buy one till seven years ago which was a GP.
What was your first scooter: GP A-reg green Lacoste scooter which I still have.
What is your favourite style of custom scooter: I like most styles if they are done well, metal flake, candy, airbrushed down to the rat look.
First rally or event: 1990 Scunthorpe Silhouettes rally at Ingleby Arms Amcotts.
Funniest experience with a scooter: Last year coming home from a rally I was in front and stopped at a petrol station asking if anyone wanted petrol. All said they were okay and I asked again as I told them we are not stopping again. Five miles later I ran out of petrol.
What’s the furthest you’ve ever ridden on a scooter: Slough solo 180 miles each way.
What do you like about rallies/events: The smell of two-stroke, the ride there, seeing people put tents up, the feeling that you are part of something.
What do you dislike about rallies/events: British weather.
What’s your favourite Scootering magazine feature: Custom scooters.

Name of scooter & reason: Stellify and F.E.A.R. – two Ian Brown songs. I have two sets of panels. Predominantly  Stellify, which means ‘to make a star of’.
Date purchased & cost: Bought off my brother in 2013 just frame and panels.
Inspiration for project: Love The Stone Roses but seen a few about so decided to concentrate on his solo career. My brother and, of course, Scunthorpe Silhouettes Scooter Club which is full of inspiration.
Time to build & by who: Around five years. Built by Dave Kirk our number 1; top bloke, top job.
Engine spec: Kit: TS1. Crank: 62mm. Carb: 35mm Mikuni. Exhaust: TSR eve modified by Darrell Taylor. Clutch: LTH.
Porting work by: Darrell Taylor.
Is the scooter reliable: It starts first kick.
Paintwork & murals done by: Dave Dickinson.
Is there any chrome: Yes, done by Quality Chrome.
Overall cost: £21,000. A lot of parts were bought twice and some were not needed in the end.
Do you have any advice or tech tips for anyone starting a project: Give yourself plenty of time if you want a quality job, nothing moves quickly.
Is there anyone you wish to thank: My brother Paul for introducing me to scooters. Dave Kirk, our number 1; always willing to help anyone. All Scunthorpe Silhouettes members. Keith Newman from KZ Customs. Dave Dickinson; a godlike genius. Eric Cope alongside Darrell Taylor for setup and tuning. Finally, all scooterists for make the scene what it is.