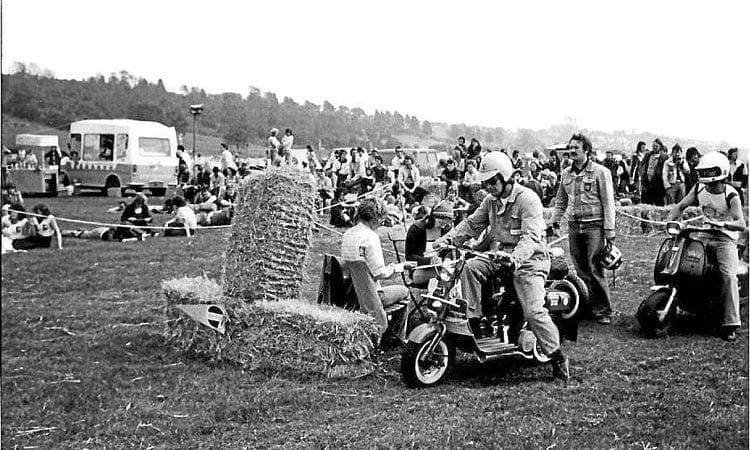 When a Vespa enthusiast unexpectedly meets a former Lambretta racer, ‘brand allegiances’ are set aside for a common cause… the love of scooters.

Who knows what interesting characters you are going to bump into during an otherwise boring and mundane day at work? I certainly didn’t! I work in a small primary school near Macclesfield in Cheshire, and part of the curriculum involves year four and five pupils taking part in the Bikeability scheme, or ‘cycling proficiency’ as I remember it (I think I’ve still got my badge and certificate somewhere!). Anyway, during this particular lunchtime, the Bikeability instructors joined us in the staffroom for a brew, and this is where the real story starts…

On this particular day I was wearing a VCB T-shirt, as I do, which prompted the question… “Have you got a Vespa then?” Here we go, I thought, and politely replied that yes, I had, and then the inevitable happened… he told me he used to have a Lambretta back in the 1970s. Nothing unusual about that particular statement, loads of people seem to have stories of how they had a ‘350cc Lambretta that did 120mph’ in the olden days (sigh… yes mate, course you did). However, the conversation didn’t go that way, it instead took a far more interesting twist, it turned out the gentleman in question was called Laurence Moore and he used to race Lambrettas in the 1970s. He was a keen member of the LCGB and began his racing career with the Manchester Lyons before setting up his own race team with a mate called Mike Hatton. The team was called Lambros Racing and was made up of Laurence on his 150 Special and Mike on a standard 150. They competed at several race meetings with Laurence coming second and third on a few occasions in the 150 Class behind the legendary Dave Webster — even beating him on one occasion! They did all their own work on the scooters and tried out lots of ways to get an extra bit of speed, simple things like drilling holes in components to make them lighter.

Of course it was all guesswork for him back then, he wasn’t an experienced tuner, so had to be creative. He told me how he experimented with the infamous Wal Phillips fuel injector which was great on the straight but ran out of fuel when leaning into a corner thus causing lean running, so it ended up in the bin, like a few other tuning products at the time!

We had a good chat about many scooter related topics and Laurence kindly offered to lend me his photo album, which contains some fantastic pictures of both race meetings and rallies in the early to mid-70s. I was honoured to view this snapshot in time. Alongside the photos are some old tickets and memorabilia from various race meetings. So I arranged to meet him at a local pub where we had another chat over a pint (or two) and he entrusted me with the album.

As well as racing he attended a lot of rallies and he explained the logistics of a few of the competitions which took place, such as: a team of two race on a scooter across a field with hay bales placed in the middle. When they reached the bales, they remove the scooter’s wheels, lift it over the bales, replace the wheels and carry on until the end.

There was also a sack race which was performed while wearing crash helmets. This involved jumping down the field in a sack with a crash helmet on and then getting on a scooter to ride back. My favourite event he told me of though, must be the one where a passenger gets onto a tray which is tied to a rope and gets pulled at high speed across a field by a Lambretta! There didn’t seem to be much thought for health and safety back then! Laurence Moore might not be a big name in motorsport but he played a massive part in scooter racing in the 1970s, alongside such great names as Terry and Ian Frankland, and the legendary Dave Webster. His photo album is a fantastic snapshot in time and he has got some amazing stories.

Although Laurence gave up his scooter in 1978 to concentrate on cycling, he remembers his racing days with fondness. He’s a really nice chap with some great stories to tell and I feel privileged to have met him; it’s not every day you get to meet a legend in your own lunchtime!