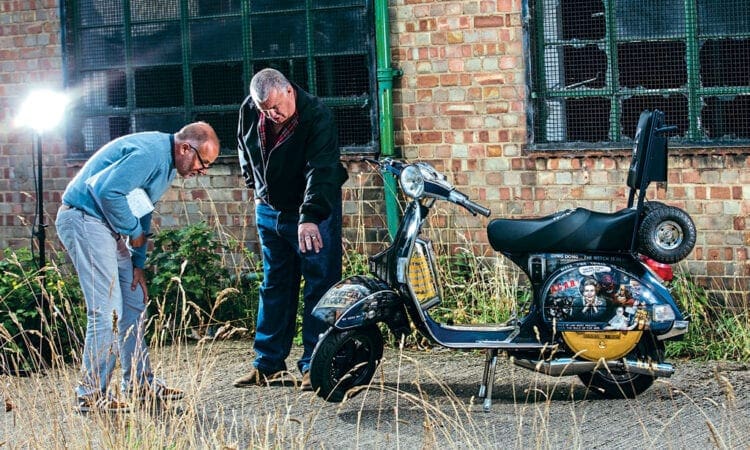 Kev Williams always knew that the theme of this scooter would be controversial. However, having served in the Forces and coming from a family with a strong mining history, Kev isn’t afraid of confrontation.

The name of the scooter, ‘When Two Tribes Go to War’, could be interpreted as being divisive, but the name isn’t there to be confrontational, it’s there to underpin and remind us of the deep-rooted impact and affect the miners’ strike had on communities, livelihoods and the future of British industry.

The miners’ strike lasted for a year and involved miners from collieries throughout the country. At the time Margaret Thatcher was Prime Minister, and the 1980s had seen a long succession of strikes and industrial action.

Some will say that the miners’ strike was an event which Mrs Thatcher used to cripple the strength of the unions. If she could take on the might of the National Union of Mineworkers (NUM) and Arthur Scargill, and win, then she could take on anyone.

I asked Kev what had motivated him to take on such a potentially volatile topic and deliver it through a scooter.

“My father and my uncles were miners in the 1930s at Merthyr Tydfil, and I grew up in a community where everyone knew each other. Everyone worked and played hard, and there was a true sense of community spirit.

“Working conditions were tough and times were hard, but everyone got along with each other and there was always a sense that we were all pulling in the same direction. Considering my background, family history and the impact the miners ’ strike had in general, the next natural step for me was to complete a miners’ strike themed scooter.”

Kev explained that ‘When Two Tribes Go to War’ isn’t a scooter which is a sole tribute to the miners. It’s a scooter which delivers the theme of the strike in detail and asks the onlooker to take into account all the issues and events that were connected to the strike, and come up with their own interpretations.

In his mission to complete the scooter and get everything factually correct, Kev completed a vast amount of research, which involved researching his family history, interviews with ex-miner friends, internet research, and his own experiences of the period. As a result, Kev collated a vast amount of information.

The next step was to sort it all out and put it in an order, so it would deliver the theme in a way which would be thought-provoking and balanced. When Kev had a basic plan of how he wanted the order of the material to be delivered, he approached Gatch to take care of the artwork.

“Gatch completed ‘Remember Them’ for me. He’s competent, he’s a Yorkshireman and he knows his stuff. Gatch and I had a lot of contact throughout the project, and he worked with me to develop the theme to a level, which would include all the detail and deliver it perfectly.”

Gatch explained that he looked at the project from the point of view of the importance of the message, and asked himself how he could deliver Kev’s ideas through the artwork in a method, which would carry an unbiased interpretation.

“The starting point is the ‘Black Maria’ Police van base colour, which delivers a sombreness and a sense of realism in terms of a connection to the chaos on the often violent picket lines. The murals? A picture tells a hundred stories, but an experience tells a hundred pictures.

“The artwork had to be right. We’re talking about an event here, which spilt over from a community fighting for their jobs to fighting for the nation’s soul, and for the unions to preserve the working rights of individuals.”

For me, the theme starts from the headset and the flowing teardrop gives an indication of the hardship endured for the twelve months of the strike.

The story then moves from the teardrop to the ‘signature mural’ of a miner’s face on the horn casting, which touches you with empathy. His expression represents a lifetime of hard work, and the ignominious way in which his career ended (when really it should have ended in a celebration) says it all.

The signature mural then branches out into the leg shields where other workers’ faces represent the other industries effected by the strike; steel, railways, docks and shipping.

Moving down to the front mudguard, one side shows the hardship of the miners and the other side shows a Police picket line cordon with officers holding riot shields. (It also reminds us that there was a suggestion that the Army had been brought in to support the Police.)

On the top of the front mudguard the tread pattern of a coal lorry’s tyres and Police riot boot footprints run over a miners’ strike banner. The message doesn’t need to be explained and the names of the two miners, David Jones and Joe Green, who lost their lives during the miners’ strike, appear on a bespoke laser-cut custom plate.

The nearside side panel delivers a suggestion that Margaret Thatcher used legislation during the strike, not to protect individuals, but for her own political purposes.

A demonic judge wearing a Freemasons ring hands out sentencing, whilst a devil over Margaret Thatcher’s left shoulder keeps a watchful eye on proceedings. In the meantime, a pathetic character of Ian McGregor as a ‘fat-cat’ body sits with a banner saying, ‘If found return to 10 Downing Street’.

The offside side panel shows Arthur Scargill delivering a charged speech to members at an NUM conference, and is supported by a mural of a hard-working miner returning from a long shift on the coal face.

The mural towards the forward element of the side panel shows the face of a young miner who’s career and future is about to fall apart. The embroidery by Corky on the King and Queen seat is Kev’s take on Thatcherism, and the bespoke backrest represents a coal sack trolley.

The miners worked hard to keep producing the fuel, which kept the lights of the nation shining bright and the wheels of industry turning. Gatch’s paint work is a blend of colour and monotone, which reflects the mood and sets the sombre tone to deliver the theme.

The collaborative efforts of Kev and Gatch, which run throughout the project, have combined together to allow the onlooker the respect to make their own decision about the impact and effect the miners ’ strike had on individuals, communities and the nation in general.

The time and effort Kev has put into the research and development of the scooter has resulted in an amazing machine.