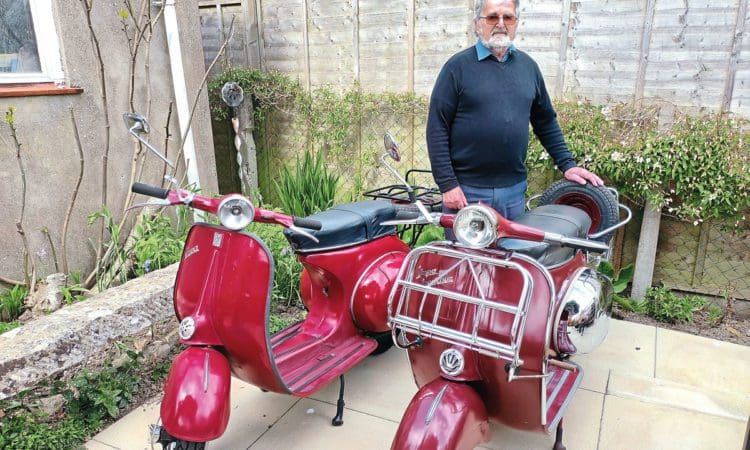 These two Vespas have been owned by Geoff Newberry for longer than many Scootering readers have been alive. Caroline paid him a visit and uncovered their stories.

Although Geoff has a long-term relationship with these two Vespas, his riding career began on a Lambretta – a decision forced by Geoff’s father who wouldn’t allow him to ride a ‘proper’ motorbike until he had passed his test. Of course, as soon as he did, the Lambretta was sold and replaced by a motorbike. The motorbike gave good service but in 1963 Geoff’s ambitions turned towards four wheels and the motorbike was traded in as part exchange on a used car. There was however one flaw in this cunning plan: Geoff hadn’t yet passed his driving test. A cheap and cheerful ‘temporary’ mode of transport was required and this 1959, Douglas Vespa 125 was bought to fill the gap.

The Vespa was in a sorry state, with scratched and dented panels but only cost him £30. He used the scooter for years, keeping it on the road for £4 a year, which included a £1 and five shillings insurance policy that insured the scooter for any rider, though the policy did insist that the rider had to have a driving licence! This made Geoff and his Vespa very popular as people would ask to borrow it when their own transport was not working!

Over the following years the 125 became a regular workhorse, as Geoff reminisced: “You will never believe the things this scooter has been put through.” He grew up on a farm and used to transport sacks of cow cake around on it, an old Lambretta back rack having been adapted to fit. He also recalls dangling new-born calves over the rack, bungeeing them into place before moving them over to their new stall with the mother patiently following on behind the little Vespa.

In 1975 Geoff bought his second Vespa, a 1965 Sportique, from his friend John for the princely sum of £5. However, once the deal was done John kept putting off the collection, which Geoff thought was strange. When he finally went to pick it up Geoff discovered that the full scooter he’d been promised didn’t exist; he was confronted by a frame and a few engine parts.

For some time his friend evaded questions as to where the rest of the scooter could be found before admitting that he’d placed the parts in the back of a car he had scrapped. Undeterred, Geoff decided to try to track down the parts and around a month later headed for the scrapyard.

The owner said he would be lucky to find them, but fortune was smiling on Geoff as he not only found the car but also all the missing scooter parts. After telling the tale, Geoff was allowed to retrieve everything free of charge.

Once home, he put the scooter back together and used it as his daily workhorse for the next 20 years. He recalls riding with a buckled piston for a while: “The piston top was completely folded in and I filed a groove around it so I could fit a ring back in. It didn’t have a lot of go, but it got me to work and back.” This bodge lasted almost a year before the engine inevitably seized.

He was not able to get a piston for ages, but finally managed to track one down from Dave Turner’s in Swindon. He had hoped to have the barrel rebored but as Dave only had a standard-sized piston in stock the engine remained as standard.

In the early 1990s, Geoff was amazed to keep finding Post-it notes that had been left on the scooter, asking if he wanted to sell it. Puzzled as to why anyone would want his old Vespa, Geoff decided to dig a little deeper into his scooter’s history. It was only then that he discovered it was a rare Grand Tourer, a special edition produced in Bristol by Douglas. In total there were three special edition Sportiques, the first two of these being the Grand Luxe and the Supreme, which were sold between 1962 and 1965. The third and final special was the Grand Tourer, which had a very short production run from late 1964 to early 1965. Although it sounded exotic, in reality the Grand Tourer was just a normal eight-inch-wheel model Sportique with front and back racks and a badge on the front.

Up to this point, Geoff had stored the racks down the side of the garage, but once he found out what the scooter was, he pulled them out, only to discover they were badly corroded. He took them to a plating specialist who told him to chuck them away as they weren’t worth saving. When Geoff explained they were irreplaceable, the plater relented and said if Geoff wasn’t in any hurry, he would see what he could do.

When he was able to finally collect them, Geoff was very pleased with the job; they weren’t perfect, but they had been saved.

Geoff had the scooter repainted in 1993 by a local car restorer who, for some reason, wouldn’t paint the headset or mudguard, but did give Geoff the paint so he could complete the job himself. This was fortunate as Geoff later discovered that the frame had been stripped of paint by chemical dipping. It wasn’t long before the remaining chemicals found their way through all the frame welds and reacted with the paint. In the end Geoff repainted it himself. At this time Geoff removed the front number plate, which had been fixed to the legshields, and added the Sportique badge. The scooter has remained untouched since then.

Unfortunately, Geoff had a stroke some years ago which he thought would put an end to his riding. Although it took nearly 10 years, determination won over adversity and Geoff once again took to the road. Knowing that the Grand Tourer was rare he didn’t want to risk damaging it, so out came his original Vespa. This had been donating parts to the Grand Tourer for years and was in need of a full rebuild, an early discovery being that the rear wheel bearing was shot. Referring to his manual (which had been part of the original £5 deal) Geoff and his wife struggled to undo the nut, only to find out that the thread was left-handed, not right as the manual stated!

Geoff chose the old scooter as it only had three gears, which meant that if he got the revs right, he could set off in second and change gear without using the clutch. There’s also the fact that it’s been adopted by his wife and his life wouldn’t have been worth living if he had damaged her scooter! As the stroke had left him with some paralysis, Geoff was unable to control the bike with both hands, so his rides were limited to short trips that only involved turning left! His strong belief is that: “Vespa makes you better.”

Although Geoff achieved his goal of riding again, his trips became shorter and more infrequent. He eventually hung up his helmet in 2017 but the two Vespas remain in his shed and are still very much loved. They may not be concours but they, and Geoff, have enjoyed a full and active life together.