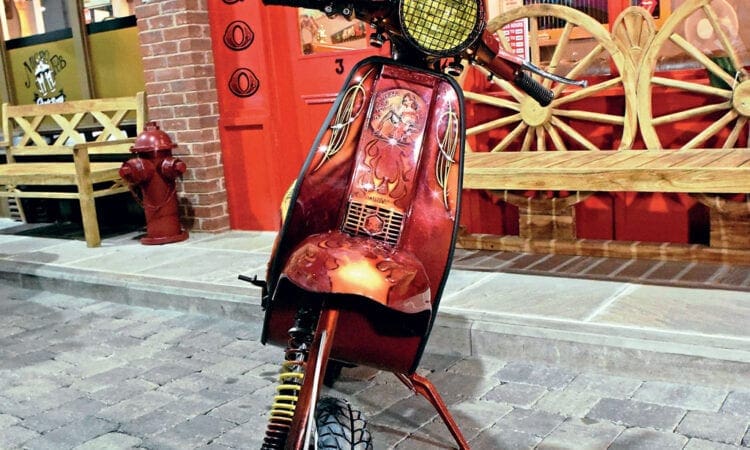 Gatch, Dino and the Toxic team have produced an off-the-wall 1940s/50s influenced low-rider Vespa cut-down, which will turn heads. The scooter enters the Toxic stable with an appeal, which is a far cry from the apocalyptic industrial look.

Before the scooter was stripped down, re-engineered and rebuilt, it started life as a humble Vespa PX125, and with it taken apart, Toxic’s fabricator, John Fellows, quickly got to work lowering the frame. Also, as part of the build objectives, he removed the standard petrol tank under the seat and converted it into a toolbox.

“Let’s face it, once we’d decided how far we were going to cut the legshields down there wasn’t going to be any room on the scooter for a toolbox behind the legshields,” Dino smiled.

The removal of the standard petrol tank made way for a customised trials bike petrol tank to be positioned between the rear of the legshields and the main body of the scooter, “so it wouldn’t interfere with the lines of the scooter, and particularly with its appearance when viewed from the front, the tank for Vintage Evil was purposely chosen for its ‘peanut’ shape,” Gatch explained.

“Turning to the rear of the scooter, the back end of the frame was cut off and the rear sections of the side panels were removed, allowing the engine to be on view, which matches the look and supports the low-rider appearance.

“Dino’s added a set of extended forks, and John fabricated a one-piece custom bodypanel, which was made from a PX horncasting and a Lambretta front mudguard, and allows the detail of the front wheel set-up to be revealed.” Gatch added.

With an eye for detail and wanting to keep things neat and tidy, Dino also decided to run the Goodridge brake hose through the extended forks. The spoked appearance of the Grimeca front hub contributes to the feel of the scooter, and the choice of whitewall tyres is perfect.

“They look fantastic and don’t interfere with the overall lines of the scooter,” Dino smiled.

I asked Gatch to tell me about the inspiration behind the build and development of the scooter.

“It’s a walk back in time representing a Toxic interpretation of a golden era of creative culture and how it developed through the 40s and 50s,” he explained.

“Ed Roth, as all knowledgeable people in the custom art scene know, started in America in Southern California and set the standard, which the world still follows today. It was the old days of modifications, when young kids were buying old cars from junkyards and customising them by whatever means they had.

“In the 1940s they started taking off the fenders and body panels to expose the engine, and as a result ‘hot-rods’ as we know them today started to develop. Unbeknown to them at the time, they sparked a culture, which attracted a global reaction and it developed into that golden era of when young kids took their girls to diners and drive throughs.

“As the scene developed, the momentum began to pick up and a culture involving street racing began to emerge. After the police started to clamp down on this activity, disused airstrips were used and, as result, this pastime developed into the early influences of drag-racing.”

Influences in the past

It was clear to see that there was a lot going on behind the scenes with the influences surrounding Vintage Evil’s theme, paint choices, artwork and graphics.

“After all, Henry Ford’s obsession with black wasn’t exactly an inspiration, so something had to change,” Gatch laughed.

“The young kids of the day once again took the initiative, and coupled with the feel-good-factor after the war, they looked to colourful reds and personalisation with pin-striping following in the footsteps of legendary pin-striper, Von Dutch (Kenny Von Dutch Howard).

“They also applied other art modifications influenced by such legendary figures in the field as Ed (Big Daddy) Roth, who created the character ‘Rat-Fink’.

“The original American custom shows of the day were often held at fairgrounds, which also influenced the look. By this, I mean that apart from just custom shows being held there, there were often tattoo artists at the venues, and this also had an element of influence of the development of the look.

“The colours we’ve used to put the hot back into hot. The engine cover is painted in ‘Fools Gold’ candy with red metalflake. I added a bit of black fogging to take the harshness away from the shapes of the flywheel cover and this keeps the flow of the lines smooth.

“The main colour of the scooter is a hot red candy with a silver base. Red is the primary colour, but it’s been kept to a tone, which keeps the vintage feel rather than the vibrant reds of today, which would have detracted from the theme.”

Because of the theme of the scooter, one of the obvious elements Gatch wanted to include in the artwork was the all-American pin-up girl. Wearing stockings and suspenders and giving a naughty wink, the pin-up girl on top of the petrol tank represents the cheeky innocence of the day.

The mural of Bettie Page on the hand-made plate inside the spare wheel gives an inviting cheeky smile, and the ‘Lucky 13’ graphic gives the iconic ‘hot-rod’ feel.

To add to the hand-made look, which the kids developed back in the day, the team decided that they wanted to keep chrome to the minimum.

The PX rear light has been replaced by a GP item and a morphed skull with diamond eyes glares back from the rear of the seat, keeping the Toxic feel.

The seat is a bespoke item completed by local upholsterer, Tony Archer. On top, it has a criss-cross stitch pattern and has been upholstered in a way which represents an influence of an American diner.

The piping on the seat fits neatly into the overall colour scheme and subtly compliments the cylinder head cowl and matt black areas of the exhaust; the lowered position of the exhaust extending out from underneath the engine tops off the low-rider hot-rod feel.

In the development of this scooter the team has maintained the Toxic feel and in a clever, well-thought-out and savvy way.

They’ve toned down the normally apocalyptic aggressive feel, and in taming it they’ve produced a scooter, which delivers a more subtle Toxic feel with vintage appearances and looks throughout.

“I’m all for history and I’m happy to tread in the footsteps of the originals, but what you have to remember is that this was always going to be a Toxic low-rider and we were never going to step away from that,” concluded Gatch.