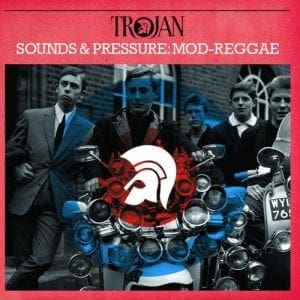 It’s not often these days that compilations of old tracks really get you going, but this double CD – part of a new series from Trojan under their Universal Music ownership – is a bit of a blinder in my opinion.

Boasting ‘40 vintage Jamaican Mod favourites’ from the Trojan archives, including ‘3 previously unreleased recordings and 14 tracks new to CD’ there are truly some gems on what I consider to be a well compiled album.

Spread over the two discs you’ll find a fine selection of ska numbers, a few soulful tunes and a couple of all out groovy tracks. Byron Lee & the Dragonaires version of Booker T’s Green Onions is a particular favourite and a fine example of this funky soul classic.

Other old soul covers include Roland Alphonso doing Soul Finger and a more ska-like interpretation of Last Night (Ska) by Byron Lee again. Another very worthy mention is the final track in Disc 2, a self-penned number by Skatalites’ saxophonist Tommy McCook titled Jerk Time which is another soulful classic full of Hammond organ and brass licks and not what you’d expect at all really. Nice.

Of course as you’d expect from Trojan ska features heavily too, but here you won’t find a large wedge of your common UK produced sounds (they’re for another album) but some lesser know tunes well intermingled. Keith & Ken’s Jamaica Ska is a good version of this classic, Sounds & Pressure by Hopton Lewis is of course included, Yeh Yeh by Rico & The Rudies does represent ‘made in England’ but does so well (after all, what is there to dislike about Rico?), and the absolutely wonderful I Feel So Bad by Jackie Edwards also stars.

Add to this artists such as Winston Francis, Owen Gray, The Blues Busters and Ernest Ranglin (performing Summertime) and this is a must have album for anyone intrigued by the title – especially as the retail price is around a fiver!