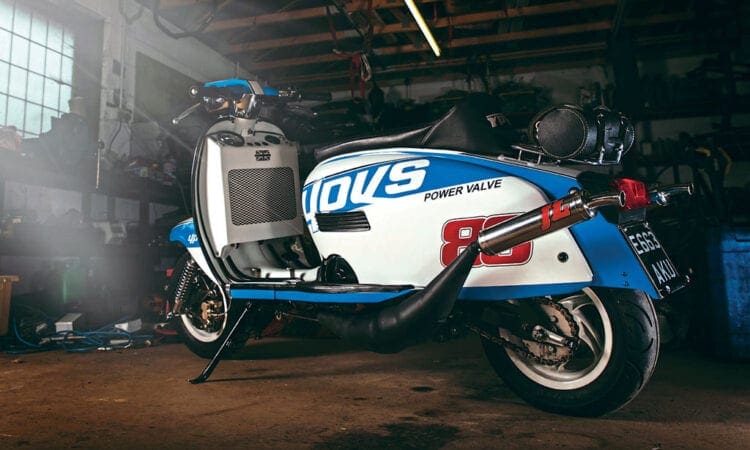 These days there are a lot of hybrid scooters on the scene, and with the choices available the possibilities and combinations are interesting and exciting. However, one classic hybrid which has been around for a few years is the YPVS Lambretta, a.k.a. the ‘Yambretta’.

You couldn’t wish to meet a more unassuming and friendly individual than Tony Holland. Tony got his first scooter, an Li 150 Series 2, when he was 16, and it was simply used as transport to get to work.

“The scooter was hand-painted, still with points, but I thought it was great,” said Tony. At the time he was an apprentice in the steel industry and little did he know then that the engineering skills he would develop through his apprenticeship would come into play later in life and help him build and develop his current scooter.

The Lambretta section of the build started life as a non-running Indian GP150, which Tony bought for £450. “My inspiration for the project was a write-up of the Rossa 350 a long time ago. Then Frank Sanderson built a 350 YPVS Lambretta (Toad’s) and put all pictures at different stages on the internet. No dimensions, etc. But that was a big help. Thanks, Frank.”

To get things going, and with the development of the project clear in his mind, Tony bought the swinging arm and both wheels from Frank, and then there was the critical issue of finding an engine, which Tony eventually purchased for £600 in 2010.

The initial stage of this process was to cut the frame to leave the headset ‘down tube’ and the curve through the frame loop, which would then be extended in the area under the footboards and re-joined.

In order to complete this, Tony made his own jig to ensure that the re-attachments would be in 100% perfect alignment. In the meantime, Tony’s YPVS engine cradle was tack welded into position on the Lambretta frame, ready for the final welds to be completed by Danny from MK Sports Cars.

Initially, Tony ran the scooter without a fuel pump. “There isn’t a fuel pump on the standard YPVS engine because the tank sits higher up and so gravity basically does the work. On the scooter set up the tank is a lot lower and so the flow of fuel doesn’t have the same momentum as on the bike.

“In the initial stages when I was getting the set up right the scooter was cutting out and I thought it was possibly the coil breaking down.” Tony explained.

However, he discovered that the problem wasn’t with the coil, and with a bit more in-depth diagnostic thinking, a fuel supply issue was identified. As a result, Tony fitted a 2-6lbs low-pressure fuel pump.

“But then, when I got that fitted there were still problems! The fuel was now flowing into the carbs under too much pressure and was pushing past the float needle.” Tony focused in on the problem and it was then simply a case of reducing the fuel pressure to regulate the flow. Job done.

It’s no secret that cooling can be a problem with the Yambretta set up, and with this in mind it was another area which Tony was going to deal with properly. As a result, the engine is cooled by the standard Yamaha radiator, which sits behind the inside of the leg shields and air-flow is received through the cut-out areas of the leg shields. Also, if the temperature starts to rise, a thermostatic fan kicks in, which has an override button if needed.

Coolant is circulated by a standard Yamaha water pump, supported by a free-flow/high-flow item, which acts as a back-up/contingency, should it be needed. So far, however, it’s not been required.

To support the lines and shape of the scooter, Tony designed an internal leg shield radiator cover out of one piece of sheet metal, and similarly the petrol and oil tanks are one-off items produced and developed by Tony.

“I made cardboard templates of the items and got Martin over at MK to complete the alloy welding. The result is that the radiator cover hinges down to allow coolant to be topped up, and the tank holds around 11 litres of fuel, which is good for about 80 miles of range.”

Tony explained that stopping power in the first set up wasn’t really up to the job. “When I got the initial disc set up, it consisted of just a single piston on the calliper and it didn’t really have the capability I was looking for.”

In order to upgrade the effectiveness, Tony fitted a two piston set up. However, even with this upgrade Tony still intends to upgrade the brakes with twin and larger diameter discs, which will give him that reassurance needed when you consider that this scooter’s delivering over 50bhp!

The exhaust pipes are JL YPVS items, which have modified expansion chambers and have been re-welded in a different orientation to suit the different angles needed to gain ground clearance and sit round the rear footboards. Along with the offside shortened rear foot board, the offside exhaust has also been cut out to accommodate the kick-starter, once again showing Tony’s forward thinking mind set and practicality.

Having said all this, it goes without saying that the bodywork needed to be modified to accommodate the extended elements of the main frame, but Tony’s done it in a way which adds to the street-racer appeal and lowered look.

“Some extend the side panels and some widen the frame. I chose to keep the width of the scooter to the standard Lambretta frame-loop, which has allowed me to keep the Lambretta lines.”

In addition, what it’s also done is given Tony the opportunity to cut away various sections of the side panels to allow elements of the engine to appear unobtrusively out of the side panels, which delivers ‘teasers’ of the RD engine sitting quietly underneath.

The paint work has been completed in a TYCO-styled YPVS paint scheme; it looks fantastic and delivers the race styling perfectly. The scooter also has neat little LED indicators, which sit smoothly into the bodywork, and the Chiselspeed seat base has been covered and embroided with the YPVS logo.

I always find projects like this to be amazing pieces of engineering and the owners of such machines always extremely interesting individuals. It’s no secret that as a result of several personal issues, it’s taken Tony seven years to complete the build.

In spite of all this, his commitment to the project has never faulted and the final outcome is that Tony’s produced a fantastic interpretation of this classic hybrid, which is clear to see when you look round this scooter and see it on the road.