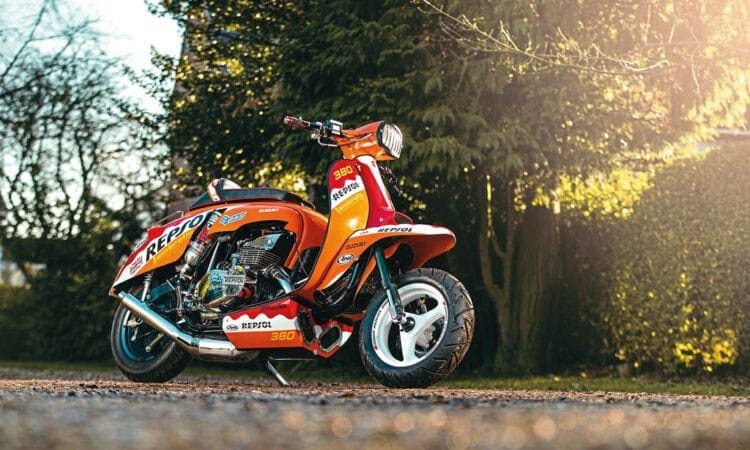 When a scooter project requires extreme modification, carrying out precise engineering procedures can give quite stunning results.

When a custom scooter is being built, it usually works around a standard set of rules. Frame and component modification, paint, engine, etc. Though there may be some form of engineering required, usually it’s just working around what’s already there. By adding something alien to the format then it requires a completely different way of thinking.

So what would that component be, perhaps an engine? That has been done before, the prime example being a Yamaha YVPS engine fitted into a Lambretta, a conversion done several times and with great results. What if it were something completely different though, say, a Suzuki GT 380 triple…

Tim Wilson is a self-confessed petrolhead with a passion for anything two-wheeled. His main obsession is with the Lambretta and over time he has created several stunning examples. A few years back Tim built one with a Yamaha YVPS engine conversion but still had a hunger inside to do something even greater.

He wanted a new challenge – something that hadn’t been seen or done before. The answer came by way of attempting to use a different engine with the same outcome, this time using a Suzuki two-stroke triple instead. Produced in the 1970s, the engine kicked out 38bhp and, combined with a six-speed gearbox, could reach a top speed of just over 100mph.

Three into two doesn’t go Tim decided this would be a perfect choice and as a keen fan of the Suzuki he already knew a lot about the way the engine worked. With a donor found, the next stage would be to make it all fit.

One of the major problems is that the engine itself is rather big. Combined with the larger gearbox and strange exhaust configuration, it wasn’t going to be an easy job. It seemed back in the early 1970s that bigger was better to make the Suzuki look more impressive. There seemed no point in making the engine compact and looking too small in the frame.

Another problem that needed working around was the exhaust. Rather than have one pipe per cylinder Suzuki, in their quest to make things more impressive, decided to make the exhaust for the middle cylinder split into two. This means it exits on both sides and thus takes up more space.

You may be thinking, well at least it doesn’t need a radiator to cool the engine and so there will be more space available that way. That is correct but to cool the engine Suzuki came up with a ram air system which fed in from above the top. Take into account that all this needs to sit under the frame loop and you have serious fitment issues.

Just when it seems there can’t be anything else there is the final issue of the leg shields. The motorcycle frame had no obstruction from the front so the air could feed in easily. With the Lambretta the leg shields are in the way, blocking the airflow. This gave Tim a lot to think about but, with an engineering background, a challenge he would relish.

Best of both worlds

To make it all fit Tim took the main cradle that holds the engine in the Suzuki frame and cut it out. This now had to be grafted on the Lambretta frame, which incidentally was a GP. Unlike when doing the YVPS conversion, more of the frame tube needed cutting away. This is because the engine with the exhausts is much longer – therefore to get the original Lambretta wheelbase dimension it needed moving further forward.

The actual cut was done just by the two front struts for the leg shields so a significant amount had to be taken out. Using a jig, Tim made sure the front and back sections were perfectly in line.

Now with half a frame from a Suzuki and half from a Lambretta, the next stage of getting it all to fit could commence. Due to the extra engine weight, it was necessary to add two support struts. They were anchored to the Lambretta frame tube just below the bottom of the fork stem and connected to the engine cradle. Tim worked out this would give the frame the rigidity it needed.

Once a rolling chassis was completed, the task of the bodywork could be tackled. As already mentioned the engine is big and very wide to allow for three cylinders compared to two on the YVPS. This means fitting of the traditional footboards is impossible so they were simply left out. Also, the side panels would need to be much wider to go over the engine.

Tim’s solution was to use the top shell and just the top half of each side panel. This didn’t look odd – after all, the star attraction is the engine and doing it this way shows it off perfectly. Cutting around the contour of the ram air system makes it look as if that’s how it would have been done in the factory, a clever idea.

With the leg shields, thought was required how to allow air through to cool the engine. Tim’s answer to this was to cut out a large oval area directly behind where the front mudguard sits. This meant from the front you wouldn’t notice this piece was removed because the mudguard hides the fact. The air could now flow freely underneath and directly to the engine.

To give a slightly more enclosed look, a fairing was added underneath which enclosed the exhaust pipes as they curve underneath the frame. Venting grilles were added to aid with cooling.

For the full feature, pick up the February 2020 issue of Scootering magazine. For more information on how to get your hands on a copy, click HERE.