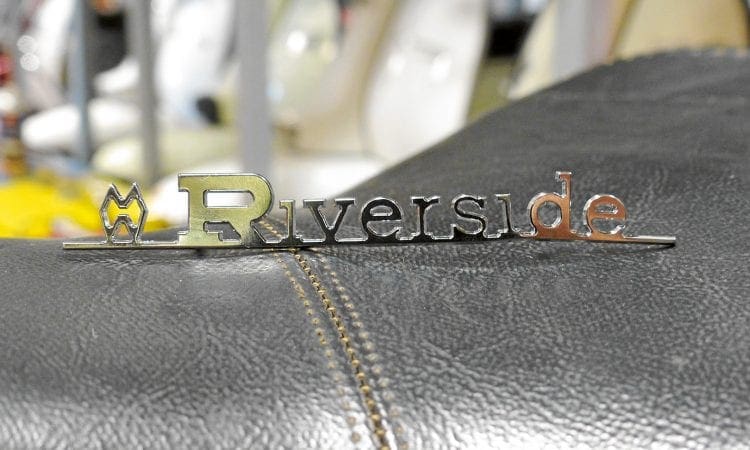 I suppose I should state first that a number of our American readers probably know about this scooter, as it was a model produced for sale in the USA.

Store wars
For those not living on the other side of the pond, I’ll briefly explain. If you’ve ever heard of the Allstate Cushman or Allstate Vespa scooters, then you’re one step ahead. One of the biggest chains of department stores in America is called Sears and it began branding motor vehicles with American built Cushman scooters in the 1940s, to which it added the Allstate brand name. The store then added Allstate badged Piaggio-made Vespas from Italy to its catalogues in the 1950s. Puch scooters and motorbikes were also imported and sold in a similar way for a while.
Anyway, a one time rival of Sears was the Montgomery Ward chain of department stores. It sold various mopeds, scooters and motorcycles during the 1950s and 60s which were branded as Riverside. This list included French Motobecane mopeds, small capacity Benelli motorcycles from Italy, the Japanese Mitsubishi Silver Pigeon and also some Lambrettas from Innocenti in Italy.

Model specifics
Old literature suggests that there may have been a Series 2 Lambretta offered by Wards, alongside the aforementioned Silver Pigeon (which doesn’t seem to have any Japanese branding on it, no doubt due to the fact that the Second World War was still fresh in many American minds).
What we do know for sure is that Innocenti supplied Wards with a Series 3, because Scootopia in Weston-super-Mare currently has this very example in the showroom. Scootopia also has a stock of Italian made Safa batteries labelled as being for ‘Wards Riverside’ as well as a box of genuine Innocenti Riverside badges.
Not only does this suggest that the Riverside Lambrettas were a big deal for Innocenti, or at least it was hoped they would be, but along with the Innocenti factory drawings for the Riverside badge (date 10-12-62) that these scooters were specially made just for Wards. The badges themselves were fitted to the legshields and each side panel and have pins on the reverse, as any other Lambretta badge did, so the bodywork would have been drilled and the badges fitted at the factory.
Other unique details we’ve found are the ‘Made in Italy’ sticker under the toolbox door, and also the extra ‘running in’ sticker on the inner legshields, offering mixture information in pints and referring to ‘gasoline’.
The greeny-blue colour too is unique, and Dean at Scootopia tells me no reference has been found to this shade (possibly blue sky Iseo) in any old Innocenti parts books either, so hopefully someone at Montgomery Wards knew the paint code for any touch ups required!
The low mileage of this particular Lambretta, just 370, not only offers the chance to appreciate a ‘factory fresh’ 50-year-old Lambretta, but also makes a number of assumptions such as the paint being original. The few other Riverside Lambrettas that have surfaced in America also suggest this colour was standard for a Series 3 Li from Wards. Interestingly, this particular scooter has the headlight lens fitted at an obscure angle. Again with no sign of this being a replacement, the assumption is made that the quality control team at Innocenti had possibly more work than it could handle at times…

Thanks to Gene at Scooters Originali (USA) and Stuart at the Lambretta Museum in Weston-super-Mare and Scootopia for additional information.