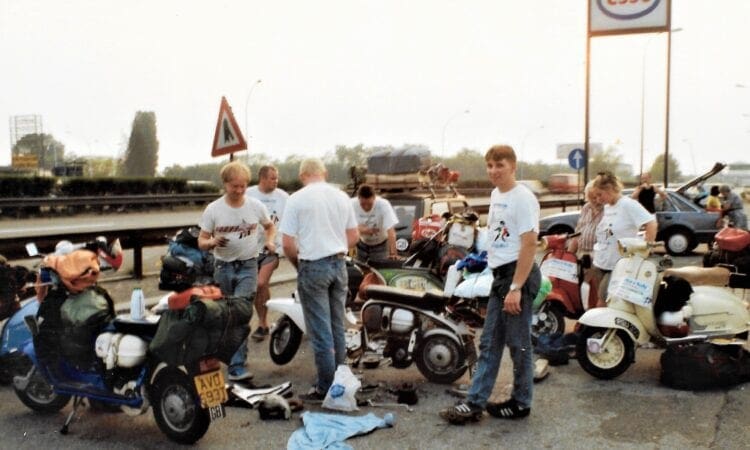 Thirty years ago this summer the trip of a lifetime was undertaken by a small group of LCGB members, it’s one which still brings a smile to many of their faces…

On July 9th, 1990, the day after Germany had won the world cup, several dedicated scooterists took on a challenge like never before. A journey to Italy for a ‘stand-in’ rally, replacing the Euro Lambretta that was left out of the calendar that year. It was a strange decision but one the head of country’s had agreed on. Feeling like something was missing Vittorio Tessera and Tino Sacchi head of Lambretta club d’Italia embarked on replacing it.

Let’s go! Initially, enthusiasm from LCGB members was strong and the thought of returning Lambrettas back to their homeland seemed like the perfect idea. The rally situated just north of Milan would allow for this to happen the perfect finish to the rally. Initial interest drummed up by leader Kev Walsh ran into the hundreds but somehow it slowly began to fade. The club had a big rally calendar that year and perhaps that what led to most pulling out. The final count was a paltry seven members with all of them thinking what had they let themselves in for.

The previous year’s venture into Europe had been helped by back up vans for recovery, carrying of spares and luggage, etc. This time with the journey considerably longer making reliability an even bigger issue the thought of it going alone was even more daunting.  There was no backing out now with T-shirts and leg shield banners printed it was ‘do or die’. Kev rallied the seven troops together perhaps a war cry. “Be proud of what you about to do but most of all don’t let us down”. In other words… you’re going, there is no pulling out at the last minute!

The journey up to Hull to catch the ferry was bad enough, the long boring road seeming to last forever. Each one wondering if the others would dare turn up. Thankfully everyone did and with a full headcount, the journey would begin via the closest pub to the port of course. An overnight ferry to Zeebrugge would mean fresh faces ready to go the next morning. The reality was the several bars on the ship meant that wasn’t going to happen and despite the promise of taking it easy that plan had already been ripped up.

Despite what looked like a lack of direction careful thought had been put into the journey. Everyone was going on a standard machine. None of this tuned rubbish which back then was devoid of reliability. These were aging machines embarking on a huge journey with the reliability they key issue. No break down service or back up just well-prepared Lambrettas. There were token spares and tools stowed on-board each Lambretta but it was up to each individual take make sure everything was in good order.

As for the journey we all bought a similar road map and marked out the same route. None of this satnav and mobile phone rubbish. The real art was reading a map and being able to fold it up correctly afterwards a skill long lost. There was to be no convoy either. Each day a designated finish point marked on the map but the intervening hundreds of miles in between you made it at your own pace. That way if you wanted to stop and others didn’t it allowed them to get on with it. It may seem strange, but it worked all meeting up at the same point each day. There were times were a two or three would ride together for a long stretch but more than often we were all split up. The finishing line all that mattered.

The long road ahead. Now traveling along the roads of mainland Europe perhaps the reality of what was ahead was beginning to set in. Sitting in the saddle as we slowly made our way, a rather laborious event. The milometer on the speedo almost standing still slowly clocking up but each one of us knowing it would have to run into the thousands before we made it back home. This slow build-up gave everyone time to think as the tarmac seemed never-ending.

The journey into and across the Swiss Alps, the venture into Italy and down into the busy streets of Milan. A rally none of us had even though about if we were honest. Representing our country in front of the rest of the Lambretta world. Taking the scooters we all worshipped back to where they were made. Worrying if the noise from the engine would cease and the wheels stop turning.

It was far more than just that. This was a journey into the unknown a test of character, getting on with those who choose to journey with you. Sorting a problem as a team when it seemed like there was no way out. Great surprises such as Mike Karslake’s last stand, it was never-ending. The effect of it all memories that can never fade from those that were there. The full story will be told in an upcoming edition of Scootering Magazine…