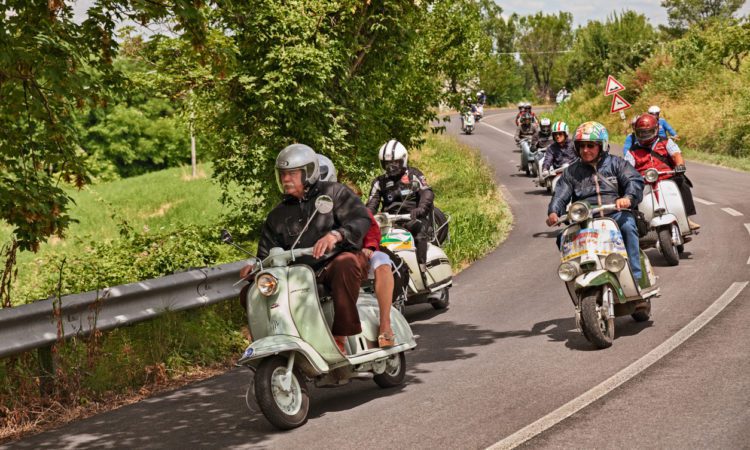 The general consensus was that from now on a club member must own either a Vespa or Lambretta, anything else would be subject to intense scrutiny.

In the late 1970s and early 1980s the route into scooter ownership and everything that went with it was by way of being a Mod. However long the flirtation lasted, immersing yourself in Mod music, fashion and scooters was an apprenticeship most of our club members went through. The music usually came first, closely followed by clothes and eventually a scooter. The Mod ethic was to dress smartly and be clean-cut, but at the same time individual and different from those around you. The rivalry was intense but welcomed, with outfits changing almost on a weekly basis as we fought to stay one step ahead.

Mike was a local lad, someone from the same year as us in school but a late arrival to the Mod style. He was good company and of course welcomed with open arms. It was only when he attempted to get up to speed with fashion that the danger signals appeared. At this time there were two approaches to the Mod style; these were the 1960s route which followed the original trends or the 1979 revival look that had been heavily influenced by bands such as The Jam.

Both were accepted formats, but Mike couldn’t grasp the concept and found himself stuck somewhere in between with very odd results.

Rather than spend the leftover money from the £28 a week he got on the YTS, he decided to raid his dad’s wardrobe. This would have been fair enough if his dad had been one of the local faces in the 1960s but he hadn’t, far from it. Mike’s first appearance was down the pub on club night and there were more than a few gasps as well as some spilt beer as Mike walked through the door. Wearing a green shirt with huge collars, a brown tie with the slim end showing while the kipper end was tucked away and beige semi flares, it was certainly different. Finishing off the look was a pair of shiny patent leather slip-on shoes. The vision he’d created was drawn from one of those clothing catalogues your grandad used to get sent through the post. It was as far away from the Mod look as it was possible to get.

His arrival hadn’t gone unnoticed by the rest of those drinking in the pub, most of whom were wondering if there was a fancy-dress party going on. He was shuffled on to a chair in the middle of our table to hide his clothes, with everyone offering to get him a drink to save him going up to the bar and getting stared at. A few of the club did start interrogating him about the fashion disaster and the disgrace he’d brought upon its members. It may have seemed harsh, but there were standards to keep. Fearing a lifetime ban Mike made an announcement: “My dad said I can have his old scooter that hasn’t been on the road for years.” This would make him one of the few in our club to actually own a scooter and the announcement carried enough kudos to grant him a stay of execution.

We always met at Dave’s on a Saturday, as he had the biggest garage and a driveway large enough to park several scooters on. Everyone had gathered early, eagerly waiting in anticipation of Mike, who was due to appear on his dad’s old scooter. Discussion ranged from whether it could be a Vespa GS to a Lambretta SX200 or, more likely, something tamer such as an Li150. Whatever it was, another scooter ‘on the books’ could only enhance the club’s reputation. All of a sudden, a vision appeared in the distance. “Could this be him?” someone cried, but the quick response was: “Nah, it’s not a scooter.” However, as it came closer, our worst fears were confirmed. It was Mike all right and he was riding an old red and white Honda C90. More commonly known as a ‘chicken chaser’ and responsible for mobilising the third world, we now had one in our club.

Everyone stood in complete silence, still in shock at what they were witnessing. Mike came to a halt, took off his dad’s old piss pot helmet and calmly asked: “What do you think?” No one said anything for a minute or so as we tried to come to terms with our world ending. The machine itself was rather tired looking, displaying a rusty brown silencer and moss on its south side, having spent years underneath an old tarpaulin. It was suggested that’s where it should go back to and never to darken Dave’s drive again. The usual ride to the local scooter shop was abruptly cancelled as there was no way of looking cool with that thing in tow. Dave, who was the nearest we had to a leader, declared it unfit for purpose and banned it immediately. A deflated Mike vowed to make changes and to us that translated into it being traded in for a real scooter. We were wrong. The following week he returned, this time with a front rack fitted that he’d decked out with mirrors and lights. Another rack of uncertain provenance had also been cobbled on to the back. The look was ‘enhanced’ by tassels on the handlebar ends but the cherry on the top was a huge CB aerial with a fox fur on the end.

There was no disguising the fact it looked worse than ever, and drastic action needed to be taken. We decided that from now on he had to follow at least 100 yards behind and park up in another street.  Probably the first and only time a member of the scooter club had to adhere to such stringent rules in keeping his mode of transport away from everyone else, that of an exclusion zone.