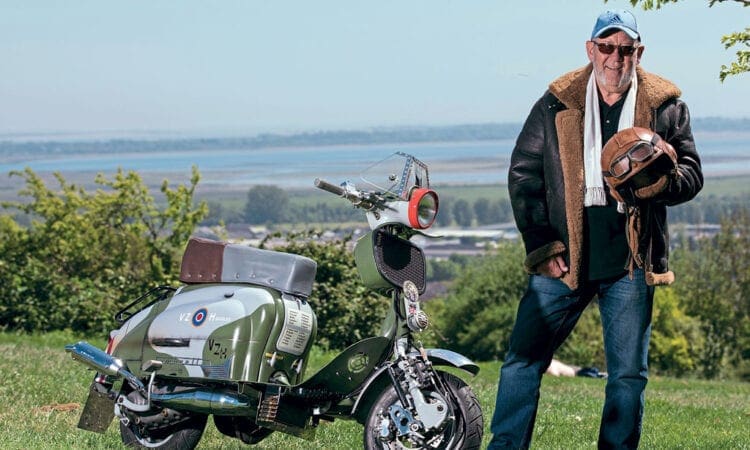 War drove innovation in the skies. When the likes of the Hurricane and Spitfire were in combat defending the skies over Britain, they reigned supreme. It was not only down to British manufacturing skills, but also to the men that flew the aircraft and the crews that maintained their battle readiness.

The aircraft bred a new type of hero, and the fate of the nation depended upon a handful of young men who were willing to put their lives on the line to preserve our freedom, which is something we must never forget.

Dave ‘Biggles’ Bignell’s themed Lambretta Li Series two is a tribute to the brave men that flew during the Battle of Britain. It’s also a scooter which is the closest you’ll probably ever get to finding a road-going two-wheeled fighter!

“Dave ‘Biggles’ Bignell’s themed Lambretta Li Series two is a tribute to the brave men who flew during the Battle of Britain. It’s also a scooter which is the closest you’ll probably ever get to finding a road-going two-wheeled fighter!”

Dave’s scootering interest began in 1965 when he was a young lad. His first scooter was an Ld150, which cost him £5. When he got the Ld it didn’t run, so having made the purchase, he took it home by train to his dad, who got it fixed it up for him.

“My Dad also had an Ld150 when he was younger and he knew what he was doing. He got the scooter running and that’s where it all started from.”

Due to family and career commitments, Dave left the scootering scene for a while, but his interest in scooters never left him, and his interest in the RAF and the Battle of Britain remained in the forefront of his mind.

“When I got back into the scene it was obvious. I wanted to produce a scooter, which would be as close to resembling a Battle of Britain fighter as possible and a tribute to the pilots that flew the aircraft. I had all sorts of ideas going round in my mind about how I wanted to go about completing the bike, and it was a case of deciding how best I could develop these ideas into the build to get the look of the scooter I wanted.”

Dave purchased the scooter in 2005 and it took around a year to build. Luckily, to help him complete the project and fabricate some of the authentic additions he had in mind, Dave had a close set of pals, or ‘ground crew’ at the ready, including his ‘official armourer’, John Madison.

The scooter had also run trouble-free on its original engine build, which had been completed by Gary Wells of Allstars for about ten years, but as part of the overhaul Dave decided to take the opportunity to re-build the engine.

What is unique about Dave’s scooter is that all the interesting features on it are always potential topics of conversation. To start off and in order to get the look going, Dave personally fabricated a cockpit-styled three-sided canopy front section flyscreen.

In the middle section of the flyscreen is the ‘pilot’s’ machine gun crosshairs, which sets the aggressive single-engined fighter look off to perfection. The bright red headlamp surround replicates the colouring of the propeller nose cone and draws in the eye to take a close look and follow the detail of the build.

Staying in the cock pit and flight control area, there are aircraft de-icing and oil pressure gauges set into the forward-mounted toolbox. The latter is covered at the front to give the appearance of the radiator, which cooled the aircraft’s Rolls-Royce engines.

The forks have an appearance of the undercarriage and sit comfortably under the radiator, adding to the authentic feel. The original legshields have been removed and replaced by a set of fabricated, cut-down legshields, which are made from aluminium checker-plate and again add to the cockpit interior feel.

The road-facing side of the legshields supports the look of the nose of the aircraft and the fabricated ‘bomb sights’ in the lower portion of the legshields give an appearance of ‘battle-readiness’. With that in mind, underneath the legshields lies an another particularly exciting feature – the ammunition box, which was fabricated by Dave and delivers belt-fed machine gun bullets into the machine guns, which extend fire out of the front of the scooter.

The powder-coated paintwork was completed by Dave’s son, Adam, and the application of the murals, graphics and airbrushing was handled by other members of Dave’s team, namely Steve Mays and John Hitchcocks.

The paintwork is, of course, in the camouflage colours of a Battle of Britain fighter, and features in the sidepanels have been intelligently designed to maintain the delivery of the appearance of the aircraft as best as possible.

Together, everything works perfectly and keeps the theme as realistic and immersive as possible.

The scooter runs on a 185cc Imola kit, which is supported by an AF race crank. Fuel is fed in by a 30mm Dellorto carb and an original Kegra exhaust takes care of the emissions. Porting was completed by the late Geoff Stephens, and Dave describes the performance as “excellent”, delivering approximately 13.5bhp.

Top speed is untested, but Dave suspects it will be around the 75mph mark, with a comfortable cruising speed of around 60mph.

Keeping to the theme

The custom seat was built by Duncan Squires, who also completed a sheepskin-pad bottom warmer and a period open-face, leather-covered replica fighter pilot’s helmet for Dave.

The red, white and blue markings on the rear of the side panels indicate the nationality of the aircraft/scooter, which featured on the aircraft’s rear vertical stabiliser.

Dave’s title of ‘Squadron Leader Biggles’ appears at the bottom of the registration plate and the polished steel mud flap has an authentic plaque delivering the line, ‘Powered by Rolls-Royce’, which keeps the scooter close to the Battle of Britain’s fighter engineering heritage.

“Tally Ho is my tribute to the pilots of World War Two that won the Battle of Britain, and I feel very strongly that these heroes should never be forgotten.” (Dave ‘Biggles’ Bignell)