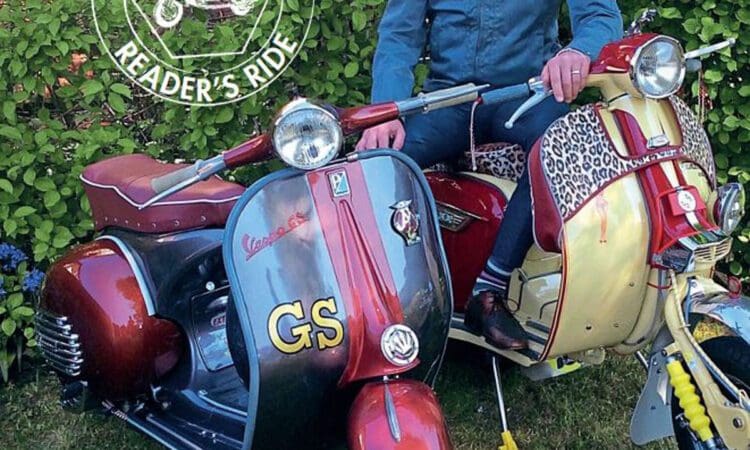 For a lot of us there was a moment or an experience in our lives which was the catalyst that projected us into the scene. For others, being into scooters was a birthright…

Christian Wheeldon is one of those lucky people who’s been brought up around scooters and the scene since he was born. “My amazing dad, Trevor, had scooters in the 60s, so I’ve always had a connection to them. As I grew up my interest developed and in the mid-80s I got my first scooter, a Lambretta Li150 Series 3 from MSC for £350.” Having been introduced to scooters through his dad it’s no surprise that Christian’s favourite style of scooters are 1960s classics with original accessories. But over the years, along with his dad, he’s owned numerous machines from full-bodied scooters to choppers!

In 2000 Christian purchased his current Lambretta, an Li125 Special. “I bought it through a scootering sales advert from a fella in Whitby for £1100. It was just what I wanted, straight, original and tidy. Having got the scooter, over the course of the next 18 months I customised it into a front-heavy, summer of ’64 Mod-style scooter with Wipac, Raydyot, Miller and Lucas lights. Once I’d completed it I ran it on a daily basis as my main form of transport to get to and from work. I also used it over the years to go to the Untouchables Mod rallies in Brighton, Scarborough and Birmingham.”

In 2006 Christian bought an SX150 for his dad, which was in need of a full restoration and paint. “My dad had been after an SX150 for a while, and he’d asked me some time back if I could get him one, restore it for him and hand it over to him ready to ride. At that time my dad also knew that I was looking for a Vespa GS150, so he did me a good deal to help with the budget. In 2010 I completed the SX and handed it over to him; he was well pleased!”

In 2011 after a lot of searching Christian found a Vespa GS150 at K & S scooters in Derby. “They had a near-complete scooter for sale, it was tatty but I didn’t care. I knew it would make a great project.”

Christian already had a basic idea of what direction he wanted the scooter to follow. But the moment of clarity arrived when he came across an original colour image of a Mod posing with his GS150 V55 in Ilford, London. “Having seen the photo I made some enquiries into the origin of the scooter and after a lot of searching I made contact with the fella in the photo, John Foden. We had numerous online chats and we discussed the early London scene, clubs, records and scooters. During one of our conversations John explained that he bought the scooter from Eddy Grimstead’s in 1964. I loved the whole vibe of the scooter, so I decided to base the restoration of my GS150 around it.”

With everything organised Christian started work on the project. “The frame and panels were sent off to be taken back to the bare metal. The brightwork parts, kick-starter, rear light, headlight and the original old-stock accessories I had in mind for the scooter were also sent off to be chromed.”

When the panels were returned, they were painstakingly prepped to make them ready for paint. “The paintwork was completed by my mate’s late father-in-law, Tony and once I’d got all the body panels back the rebuild began. In the meantime, the seat frame was blasted and coated, and a new-period seat cover was made by one of my pals in the classic car business.”

Overall, the project took about two years. “After the initial build there were some teething problems, but in 2017 I had the engine rebuilt and it now runs perfectly,” Christian smiled.

Shortly after the completion of the GS project Christian started to have a rethink about the looks, appearance and style of his Li125 Special. “Back in 2000 during the initial restoration I’d put my stamp on it. But since then, I’d racked up approximately 40,000 miles in all types of weather, which had taken its toll; basically, it was looking tired so in 2018 I decided to use the opportunity to make some changes.”

Christian wanted to ditch the front-heavy summer of ’64 look and go for a less is more look with a racier style. “I removed the front-end accessories and sourced others from my collection, which would suit the new style of the scooter. The accessories are all authentic; however, the leopard skin print ‘leggie bag’ is a reproduction item, which was created by Andy Nixon and only 10 of them were made. I know it’s a bit ‘Rod Stewart’ and it’s probably not everyone’s cup of tea, but nevertheless I had to have one; and I love it! And more importantly so does my wife, Hayley.

Other bodywork changes I made to the scooter were to remove the front mudguard, replaced it with a ‘skinny’ one and upgraded the paint. The CW and HW stickers on the side panels are mine and Hayley’s initials. But the plumbers at work all say they really stand for cold water and hot water!” Christian laughed.

As part of the upgrades the engine was sent to Rob Miller at Simply Retro, and the scooter’s handling was improved by a set of non-standard 200 forks. “I got the forks off my dad which ironically brings everything to a full circle, from childhood to present date.

As well as this, the pleasure that I got from completing the builds and seeing my visions for both scooters come together, which were from the ideas I’d developed over the years and from my childhood, was a truly unique and personal experience.”

Words by: Stu Smith. Photos by: Hayley and Katie Wheeldon.

If you’d like to read more stories like this, you’ll find them in the magazine, which you can subscribe to here! Alternatively, why not order the current issue here and see what you think?