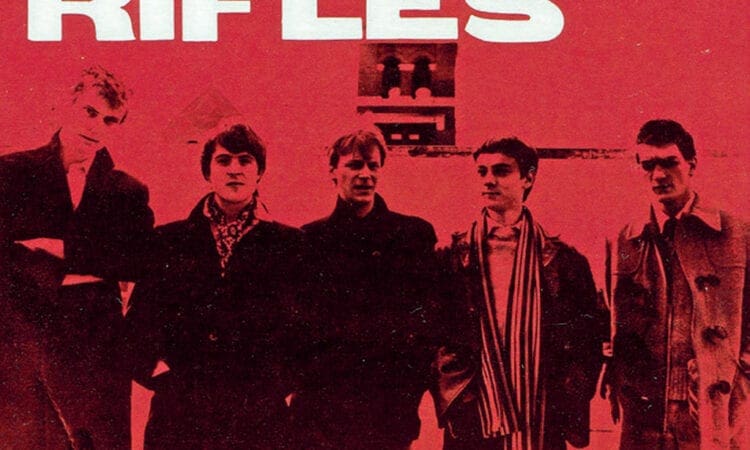 Rewinding back to the early 80s, the UK was experiencing the second wave of Mod revival as well as the 2-Tone explosion reaching the peak of popularity. Over in Canada was a five-piece outfit by the name of Dub Rifles; No Town No Country is a retrospective overview of the band’s career as the subtitle EPs And Rare Recordings suggests.

Dub Rifles didn’t fit conveniently into any neat musical pigeonhole, with Mod, power pop, reggae, ska, funk, punk and 60s garage forming lesser or greater parts of their repertoire. A total of 18 tracks feature on this collection of EP tracks, of which Dub Rifles released three, and live recordings (from a show in Montreal circa ’84).

Dub Rifles never were an out and out ska/reggae outfit, despite being tagged as such on a number of occasions, with tunes such as Mine, X, Production Of Funds, Testify and See You demonstrate, this band were musically diverse! That said, an abundance of ska, reggae and 2-Tone inspired numbers, including Over The Top, Reluctant Host, and the 2-Tone-esque Cafe of The For show as to why some saw them as a ska-reggae outfit.

Remastered and compiled by Colin Bryce, guitarist and vocalist, for Canadian specialist label Sundowning, this interesting retrospective release certainly does add credence to the claim that (in musical diversity terms) Dub Rifles were Canada’s answer to Britain’s The Specials.

Rock music documentaries tend to fall into one of two camps, either a dry succession of talking heads telling us how wonderful the subject is, or they try to out-do Spinal Tap, a mountain that has (in all honesty) yet to be climbed.

Madness’ Lee ‘Kix’ Thompson fortunately manages to find a middle and entertaining way here. At first glance it seems to be a straightforward line of friends, family, band members and professionals who deal with him on a regular basis, but predictably things aren’t all they seem and (without wanting to give the joke away) a strange, almost Ealing Comedy-like, parade of familiar faces grace the screen with tales of a young Kix, his ‘escapades’ as a young man, the founding and following success of the band, its demise and resurrection and his side projects all the way up to today’s Lee Thompson’s Ska Orchestra.

There’s plenty of film from the band as a whole too, with historic footage mixed with clips from Madness’s infamous videos, which help to illustrate the wonderfully eccentric Mr Thompson and his life as a member of one of the most popular bands to come out of Eighties Britain.

The accompanying bonus material rounds out the story. A more traditional line of interviews with the man himself, along with supporting input from his family and friends. Finally, there’s an audio only interview with the film’s director, Jeff Baynes, which explores the origins and tribulations of the making of the film.

As well as the DVD project, there’s an accompanying album available, which features Lee Thompson’s various musical adventures, from the early days of Madness, through Crunch and onto his current project, the Lee Thompson Ska Orchestra and extracts of the commentary on Lee’s life story interspersing the musical treats.

Running at two discs, it’s a comprehensive overview of his career, the brief verbal interludes putting a lot of the accompanying music into perspective. For an amusing insight into the life and somewhat strange mind of one of Britain’s most extrovert musicians, both DVD and CD come highly recommended.

Popes of Chillitown Work Hard, Play Hard, See You in the Graveyard

London-based Popes of Chillitown follow up their highly acclaimed debut To the Moon with another slab of potent skapunk. It seems that over the last couple of years a classic rock edge has been added to their music, but the underpinning sound is unmistakably theirs. Slightly off-key trombone pours over the top of hectic skanking guitar, rapid fire vocals rattle off their message and the sound becomes a frantic whole.

Where the previous release had a very definite reggae tinge to it, this shows a band progressing both in its ability and approach to the source material. More Random Hand than Specials, this raucous album needs to be experienced with an open mind. Powerful in its delivery, clever lyrics abound and an overwhelming sense of a young band at its peak mesh together to create a complex but driving sound that draws together a multitude of influences while creating something that is definitely their own.

Berkshire isn’t really an area generally associated with reggae, but Audio-Tonic have firmly put it on the map with their debut release. A mixture of old school ska, reggae and dub, but pulling down a variety of related influences and angles throughout the album, they keep one foot in the past, while exploring current trends.

A comfortable 13 tracks long, with a 100% no filler guarantee, this is one of the best debut reggae albums I’ve heard in a few years. Interesting samples permeate the album, acting as links to the songs that follow as often as being musical components. It’s the songs that really are the stars though. Whether you’ve a taste for early reggae, traditional ska or more contemporary sounds, there will be a treat awaiting you here somewhere.

For too many years ska music has been regularly, and often correctly, castigated for its lack of imagination, reliance on chugga-chugga rhythms, and obsession with its own past. Coming out of the northern industrial town of Darlington, The Skapones show that there can be much more to the genre than those clichés. Yes, obviously the emphasis is on the offbeat, and there is an impressive amount of brass on show, but this isn’t another 2-Tone or Boss Reggae revival act.

Somehow they’ve managed to take the basics, mess them around, add something new and come out the far side with a lively, powerful, danceable fusion.

Yes, there are moments when it looks back to The Specials or Hot Knives, but on the whole it’s adventurous, none so more than when telling the true tale of a gang of ‘Monkey Hanger Teds’ who decided to take on London’s infamous Krays, a song which blends an almost film score feel with a ska feel, using the music to tell the tale as much as the words, much in the style of Too Many Crooks’ amazing Titanic from a few years back, or in the polemic Masque Of Anarchy which rants against the injustices of the world, offering a solution in the words of – well, you’ll have to hear it to find out, won’t you?

Legendary skabilly guitarist Roddy Radiation guests on The Body Of JB, giving his unique style prominence, and telling another tale in the process. All in all, this has to be one of the stand-out ska-related releases of the last few years, something that its high standing in the national reggae charts supports.