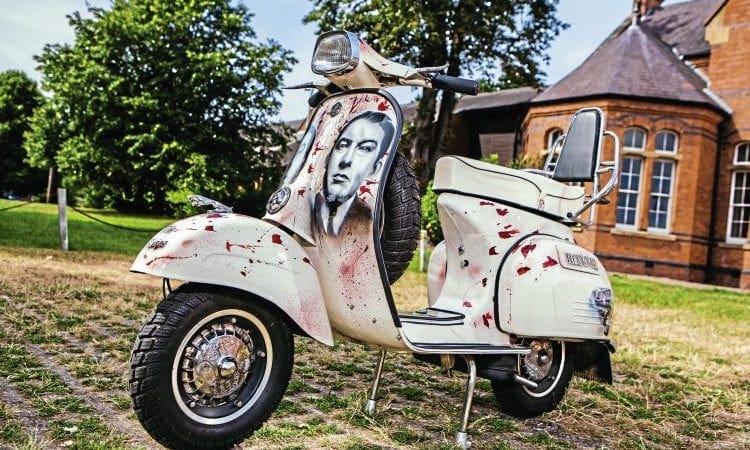 When Mitch mentioned he owned a custom Vespa featuring his family history I’ll admit to only being politely interested. That changed dramatically when I saw it featured the Kray twins. 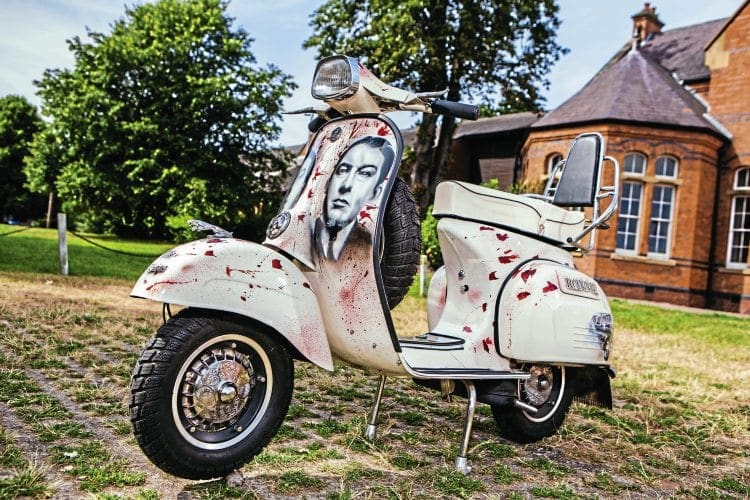 Aaron ‘Mitch’ Mitchell is no stranger to the pages of Scootering, as at the last count this will be the third of his projects to feature in the magazine. Although it’s been around for a few years I only became aware of this machine while we were photographing his latest Lambretta project ‘The Troubles’. “I should have walked away from this scooter so many times,” said Mitch. “It was offered to me as a tatty but usable 150 Super at a reasonable price. Most of my builds have been Lambrettas and I thought it would make a refreshing change. Little did I know that the most useful thing I could have taken with me when I first went to look at it was an X-ray machine!” Much has been written about the quality of Far East restorations and just as not all of those horror stories are true, Mitch now knows that British restorations aren’t always perfect. “I don’t know the full history of this machine but it had been in the UK for at least 25 years before I bought it. Once I started the strip down I discovered that it had been bodged to the highest order. In places there were no fewer than three layers of tin cans welded to make the frame look presentable, all of which had been done years ago. The floor was completely rotten but replacement floor panels had just started to become available and I thought I’d give it a go. At that point I opened a money pit and in the end it was only stubbornness that kept me going!” 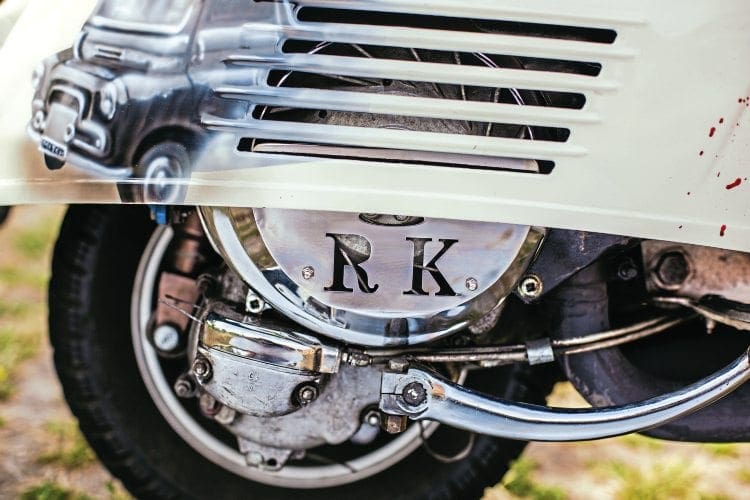 Not only was the frame in poor condition but most of the panels were beyond use. “I have to admit that it’s something of a mongrel panel-wise. The mudguard I had kicking around and the NOS side panels had been on a dealer’s shelf for 20 years or so. I’ve no idea what they were intended for originally but they’re a full inch wider than the standard 150 Super examples.” The scooter’s engine had been rebuilt not long before Mitch purchased it but was still running in standard trim — including points and condenser. Mick Maidment worked his magic on the unit which emerged as a Polini 177 that combined with a 10in wheel conversion has proven to be both reliable and powerful enough for Mitch’s purposes. 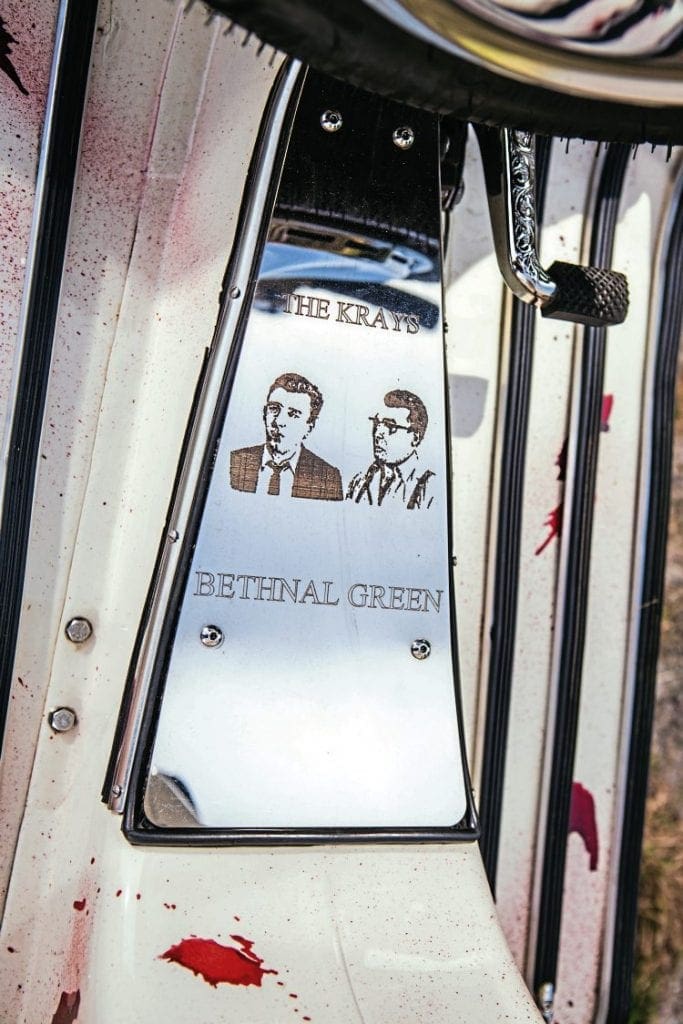 Out of The East End

When it came to deciding a theme serendipity played a key part. Although he’s been based in the Midlands for most of his life Mitch was born in the East End of London. “My mum left London when I was only a child,” explained Mitch. “I always knew she’d done it to make a better life for us and although she did a great job I’d always wondered about my family down there. After I left the Army I decided to trace my family tree.” 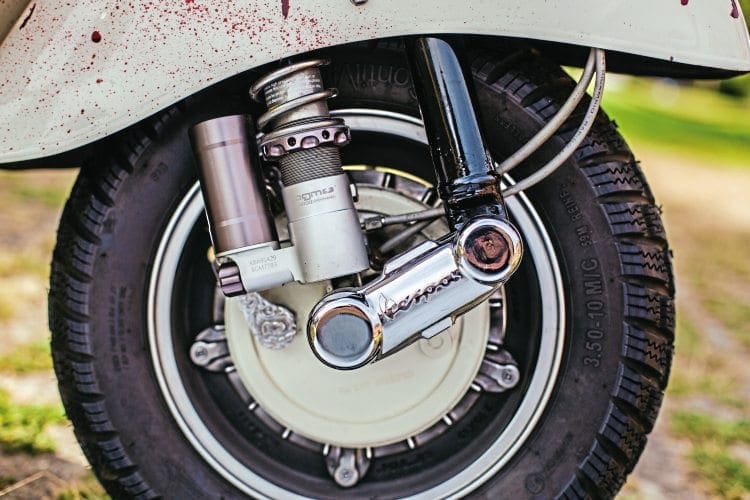 I’m going to be careful here, mainly because there are some ‘players’ in this story that are still around and I’m particularly fond of my kneecaps. Part of the success of Who Do You Think You Are?’ is watching celebrities discovering their hidden past (Danny Dyer with royal blood? Who saw that coming?). For Mitch there was a similar revelation. “When mum left the East End it wasn’t the general situation she was taking me away from. There was a strong family connection to the Krays and although I’m not related to any of the ‘big names’ from that period there’s a relative that can be found mentioned in many of the books written about the brothers.” Without getting too sentimental, Mitch has made a success of his life. He’s had a rewarding military career which has been followed by similar success in business and he’s a very proud grandparent. “My mum knew that if we’d stayed there’d have been pressure for me to join that lifestyle and she got us out of it. I can’t help but wonder how different my life would have been had my mum not made that decision.” 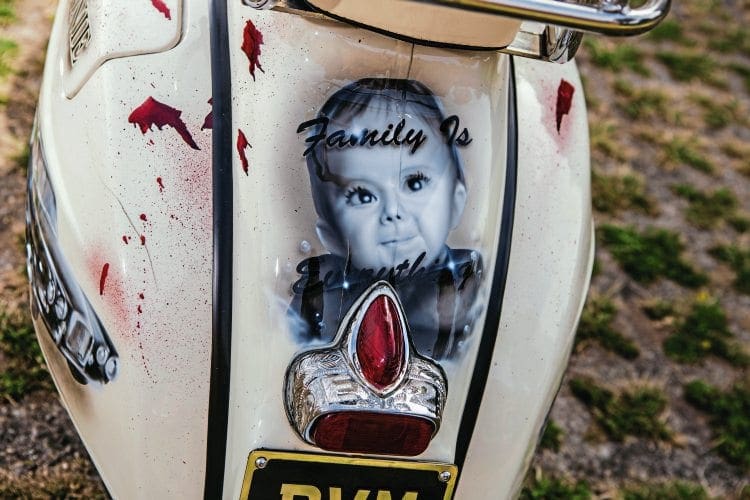 We all express ourselves differently, Mitch is a prolific creator of custom scooters and the Vespa was ready for painting around the time that he’d come to terms with his family history. “I wanted to create something which told that story.” Fraser Day of Envy Customs, a favourite of Mitch’s, was the artist selected to represent the story in paint. What he’s created is at first sight a fairly straightforward `Krays’ themed machine. All the elements are there including Ronnie and Reggie, a Jaguar Mark X and blood spattered paint.

Stepping back a little I see a different narrative to the gangland glorification depicted on the surface. At the front of the scooter are the twins, representing the life Mitch was perhaps destined for. The trappings of gang life are represented along the scooter’s side panels — illustrating all that could have gone wrong. The blood not only represents the Kray twins’ undisputed violence but also the family line that ultimately leads to the rear of the scooter and Fraser’s depiction of Mitch’s grandson, George, which is the peaceful and optimistic view Mitch has for his family’s future.

Mitch builds scooters to ride and since completion this scooter’s been seen at many rallies — picking up a few trophies along the way. It’s not the only Kray’s themed machine around at the moment but it does carry a certain pedigree. This scooter is more than the portrayal of a moment in British history, it’s the story of someone coming to terms with the past and appreciating the present. Perhaps we should all have a look at our family history — who knows what schemes are waiting to be unearthed. After all, who do you think you are? 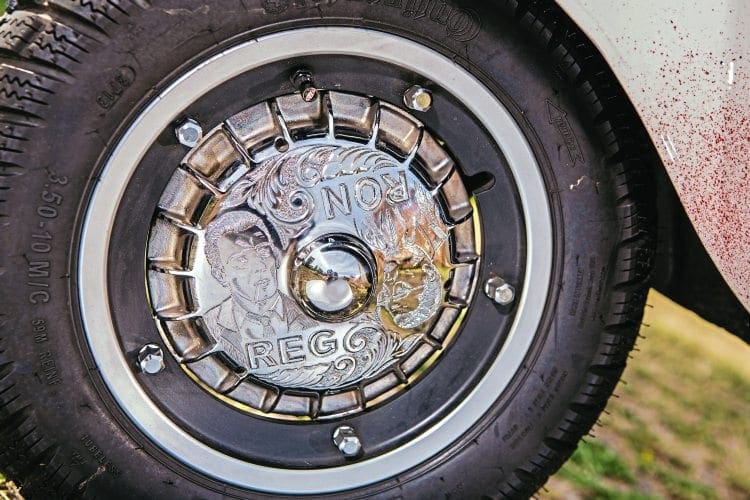 Inspiration for project: My family history. 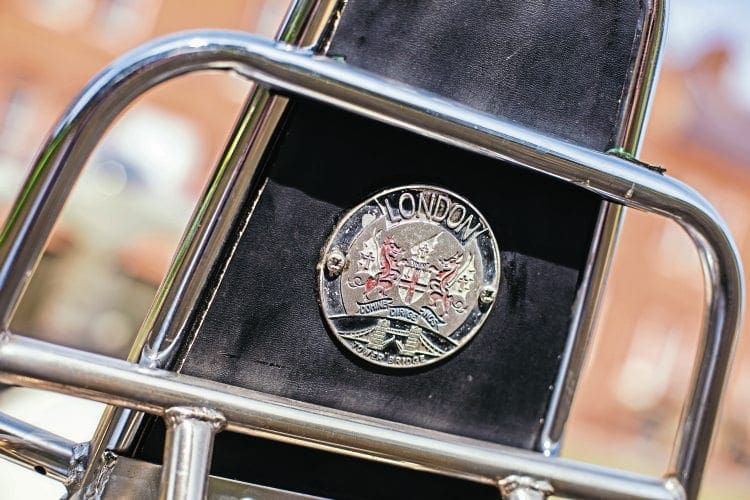 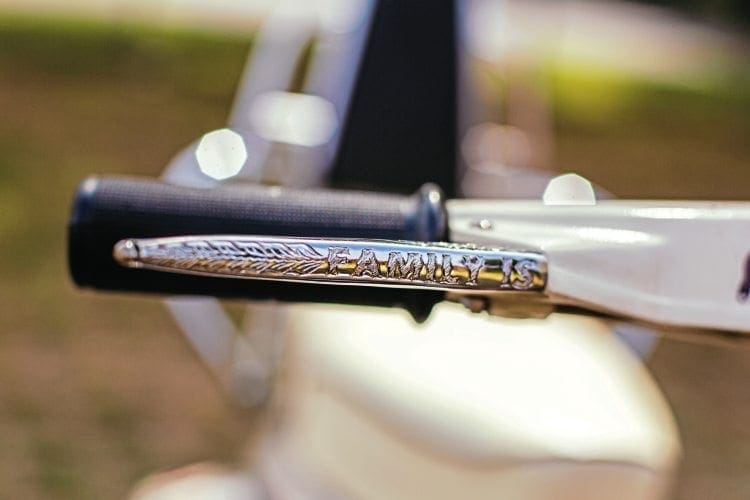 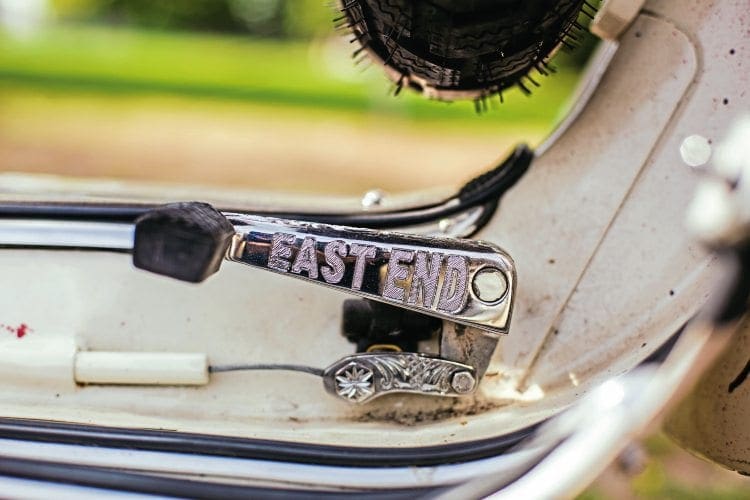 Biggest challenge: Getting the frame sorted. 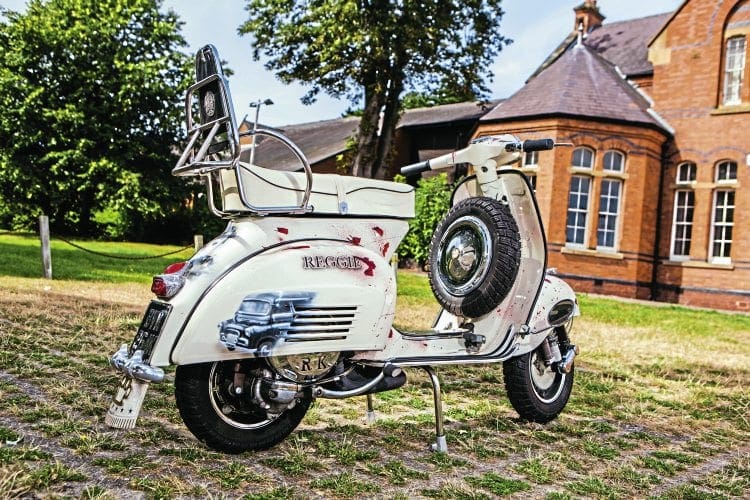