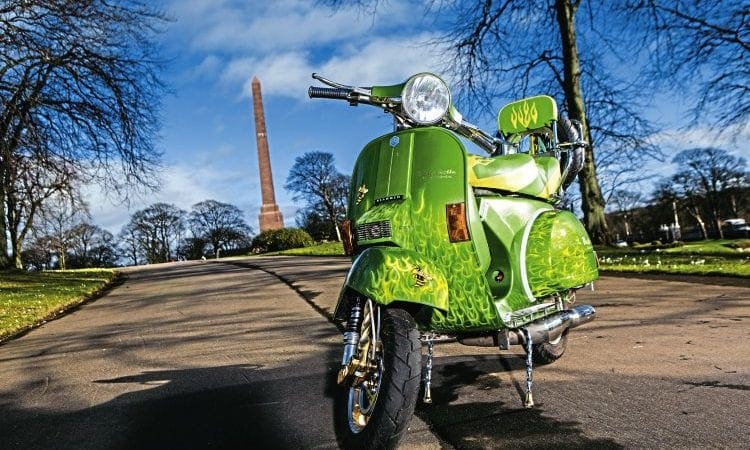 I have pretty broad tastes when it comes to custom scooters, but every now and again I see one that’s so ‘right up my street’ that it may as well be parked in my garage. Mike Copland has built one such scooter. Git… 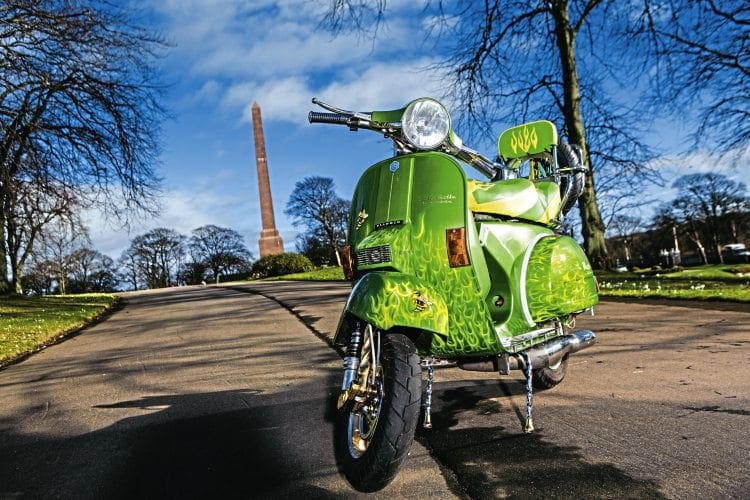 For many who came up through the rally scene of the early to mid-Eighties, the P Range Vespa was the regular rally-goers’ tool of choice. Not as posey as a Lambretta, as niche as an older Vespa or as quirky as a Zundapp. They turned up at seaside towns in their thousands, clocking up hundreds of miles to get there, rarely missing a beat as they did. They were the scooterboy’s workhorse, machines that were bought in their tens of thousands, and ones that became something of an addiction to many of us as time went by.

While some of us know we can give up at any time, Mike has embraced the monkey on his back with both hands (not easy, when you think about it!) and set about making something which embodies a taste of that era, albeit filtered through modern sensibilities, in the scooter that you see here. Bright paint, minimal accessories and of course that stereo console and toolbox speakers all say Eighties. Look a little deeper, though, and the current era shines through.

The stereo console is seamlessly blended into the bodywork instead of being just bolted on, and a matching cover for the CD player having been fabricated to match. The speakers are more subtle than in days of old, and the floorboards now wear stainless steel plates from SIP instead of a rubber mat. The devil is in the detail, as they say. 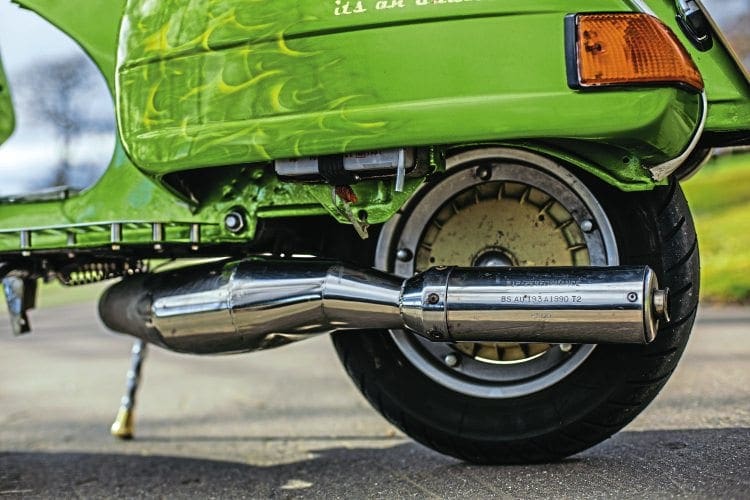 It’ll be no surprise to hear that Mike isn’t a newcomer to the customising world, in fact, he’s got a pretty good history. His first venture was a classic 80s style P Range cut down, complete with Lambretta mudguard and tombstone rear light, styling that was very much of its day. This was followed by a Mk1 T5 with a pugilism theme, complete with boxed murals, and then there was this. 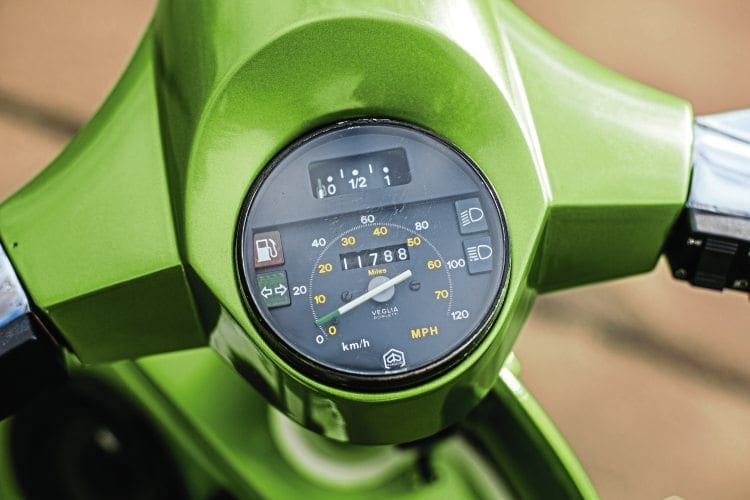 Originally done in red and black ‘Eerie Dess’ — again, very Eighties — this lasted 10 years before getting a bit tired looking and in need of an overhaul. They only get tired looking by being used though, and this is an area he feels strongly about. He doesn’t create them to sit in a warm garage, remaining as fresh as the day he tightened the final bolt, but for getting the miles in. Even the full custom 15 was a daily ride, getting used in all weathers. Living in Aberdeen, you have to imagine that that’s going to be pretty harsh occasionally.

Once he’d realised that the old girl was getting a bit shabby, a revamp was on the cards. The green Candy and contrasting yellow flames, with angry wasp logos, was painted by another Mike, in this case local artist Mr Coutts, who also applied genuine gold leaf to the ‘Vespaholic’ panel lettering — the first time he’s ever worked with it but you’d not know from the quality of work. As to ‘why’ he used it, the two Mikes looked at a few paints in an attempt match the gleam of the gold plating before realising that only the real deal would work (disproving that old idea about ‘all that glistens isn’t gold’) and so the decision was made to use this notoriously difficult material. Being as far North as he is may be a large part of the reason for the engine specification. Built with the assistance of his mate Digby, it’s a practical lump. 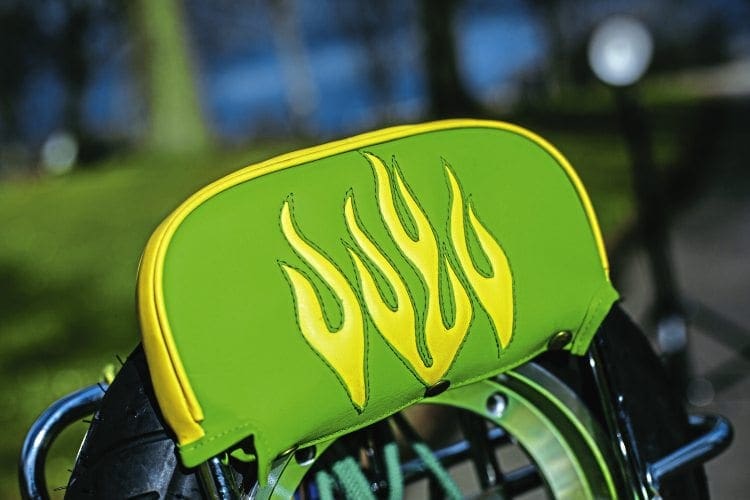 Not highly strung, but with a couple of sensible improvements to aid distance work. A Polini 210 was mated to the improved SIP piston, while a race crank slides it up and down. A SIP pipe throws out the waste gases while a standard carb — upjetted to suit —sucks the fuel in. Nothing that’s likely to cause problems on a daily rider, but with enough extra ‘oomph’ to make use of the short fourth gear, pushing it up to around 75mph in anger, but to cruise comfortably at 60.

In another huge nod to the Eighties, an early decision was to use a mixture of gold and chrome in the brightwork, although it didn’t go according to plan, with the original plater making a complete dog’s dinner of the job, returning items after a long period of time with a finish more akin to chocolate wrappers than custom plating. Fortunately, Quality Chrome came to the rescue, with the Hull-based firm living up to their reputation for turning out high-quality shiny bits once again. 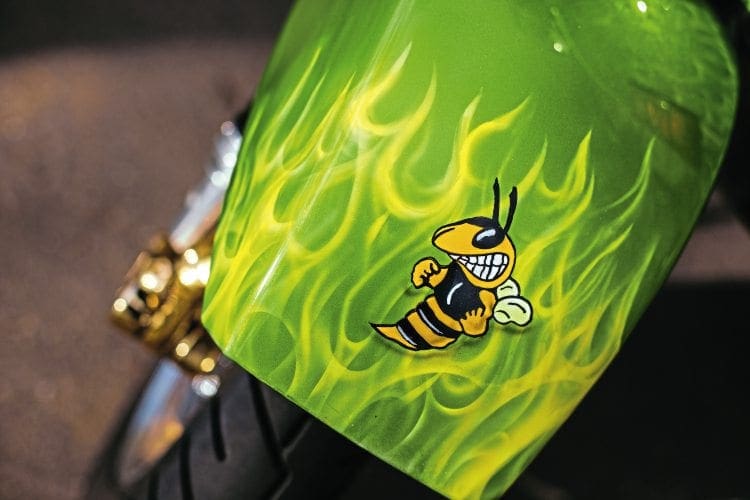 The final detail is the seat from Scottish seat covering genius Sarah Foss. It adds the finishing touch to the machine, which has already collected a handful of well-deserved trophies. 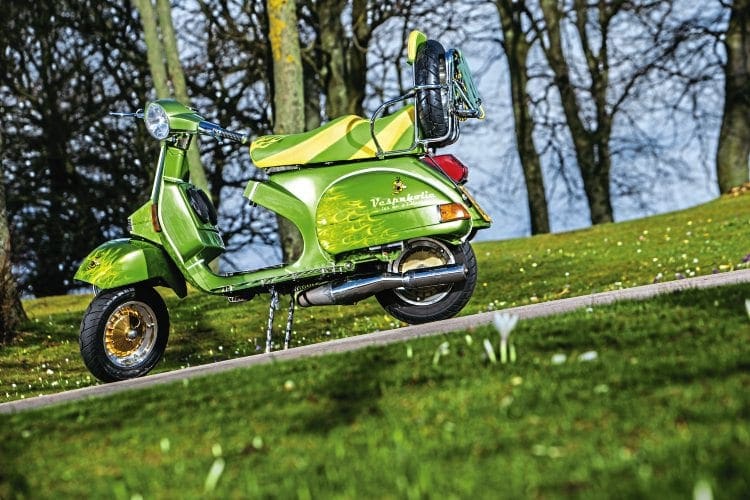 Like any addiction, being a Vespaholic comes at a cost. However, the five grand spent so far has left Mike with something to be proud of, and thankfully it’s not a habit he’s in a hurry to kick. Hopefully he’ll continue to create show winners for a while longer.

How and when did you first become interested in scooters: Quadrophenia and the Mod revival.

What is your favourite scooter model: Vespa GS.

What is your favourite style of custom scooter: Everything from full bodied customs to chops and cutdowns.

First rally or event: Dunbar ’84 on the back of a mate’s scooter.

Your funniest experience with a scooter: Too many to list but one of the weirdest was at Oban in the early morning. It was quite foggy and dark, I was out with my wife and mates, when out of the darkness a donkey came running followed by three half-dressed scooter lads and disappeared into the dark! 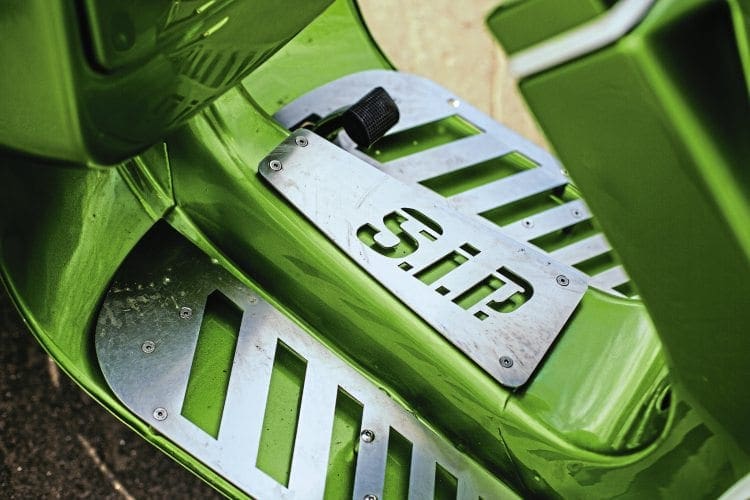 What’s the furthest you’ve ever ridden on a scooter: Great Yarmouth.

What you do like about rallies/events: Having a laugh and meeting up with old and new mates.

What do you dislike about rallies/events: Bickering and taking it all too seriously, a lack of the live and let live attitude sometimes.

What’s the most useless part you’ve ever bought for one of your scooters: Polini Venturi kit.

Name of scooter & reason: Vespaholic because it is an addiction.

Inspiration for project: She needed a facelift — it had been 10 years since her last one.

Time to build & by who: Three years this time put together by myself and a helping hand from a few mates. 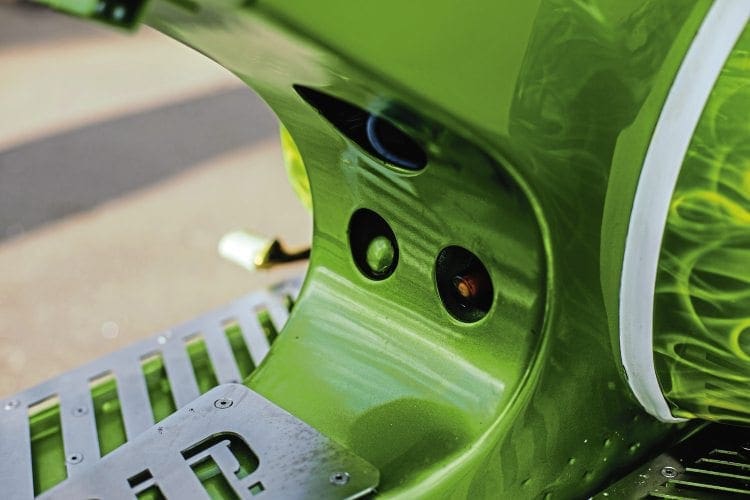 Any frame modifications: Stereo console moulded in and cover made by Mike Coutts.

Are there are any specialised parts: Twisted front forks and stand. Seat done by Sarah Foss.

Is the scooter reliable: Yes, very. 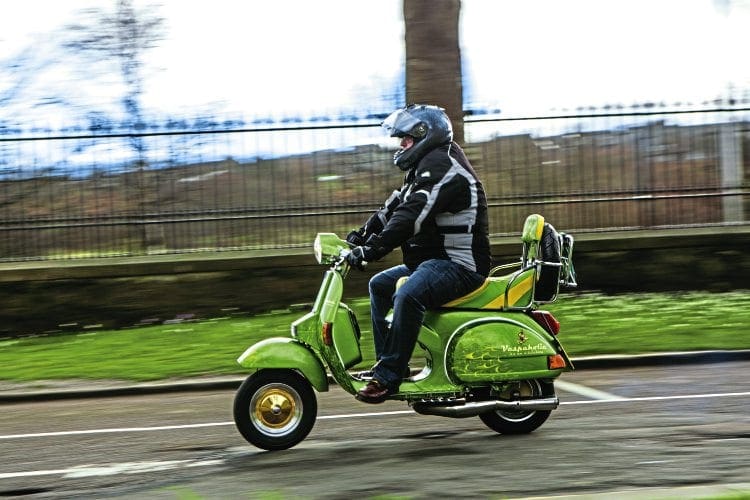 Is there any chrome: Gold and chrome by Quality Chrome — a great job and for coming to my rescue.

What was the hardest part of the project: Waiting, and being let down by certain companies.

Is there anyone you wish to thank: Mike Coutts — outstanding work as usual. Quality Chrome for coming to my rescue and Sarah Foss for the seat. My pal Digby for the help rebuilding my engine, Rich Cowie too and, most importantly, the wife for not stabbing me after I told her the cost!