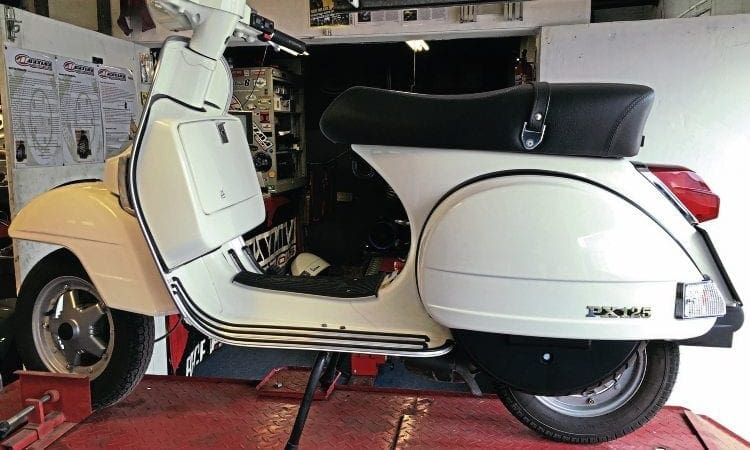 Mega-feature? What’s so mega about a mere three pages, I hear you cry! Well, consider this the introduction to an ongoing feature, a dedicated new section which will, over time, accrue a mass of information for Vepsa owners of all shapes and sizes. The sheer volume of Vespa-related items we intend to fit, test and report on is, well… mega!

What will we cover and why?

Although over the later months the feature will expand onto the smallframe Vespa, the GTS300 and suchlike, to kick-start the feature off in the early editions, we will first be fitting shiny bits to the tried, tested and trusted PX125 and PX200. The PX Vespa has been the rally hack of choice for thousands of scooterists over many years, decades even. There are so many of them out on the road, that we wanted to do justice by them and run a comprehensive series of features, showing pretty much every aspect of tuning and upgrades which is reasonably possible. So what will be covered? Well, this list is by no means the complete picture, but certainly gives you a glimpse into the diversity and depth of the task ahead. A few of the best (not in any particular order):

What can a home enthusiast hope to achieve with a few basic tweaks to a standard 125 ‘learner legal’ engine.

How does a 125 two-stroke geared compare against a 125 four-stroke auto? And what power improvements does each change, tweak and upgrade bring to the machine? Dyno graphs galore.

Aftermarket box pipes through to expansion chambers, what difference do they make?

Are big carbs required, and if so… what are the pros and cons?

The source of inlet timing on a Vespa, how do changes to inlet duration, stroke and rod length affect the engine?

Gearing and clutch. If I have more power and more revs, what does this mean for my clutch and gearing?

Cylinder kits. If I just bolt one on and don’t ‘blend the transfer’ — will it still work and how much power will I gain?

If I have extra power, what consideration should I give to safety, handling and stopping power?

Racks, luggage, sat-navs and touring equipment. Now that I’m ‘all revved up with no place to go’ what extras might make for an easier touring experience?

The initial testing point benchmarks the scooter in completely standard trim, highlighting power in bhp and lb-ft torque, plus also a GPS reading for top speed comparisons. With that data being collected, we can be sure to make accurate comparisons and observations as to how each step of the tuning and upgrade programme effects the next. Of course some of the upgrades, certainly in regard to luggage, suspension, tyres, brakes etc. cannot be judged in these terms and will be somewhat more subjective, but the relevant tests will be carried out where possible.

At the time of running the first benchmark/baseline test on the PX125, we had an LML four-stroke auto to hand, and thought that this might be a good opportunity to run the two scooters head-to-head both on the dyno and on the road, simply for comparison purposes to see how these difference animals compare and perform.

Another simple test was to do a somewhat ‘Health Robinson’ test on the acceleration of a standard machine, and to see how that improves as we upgrade the engine. It’s easy to show a dyno with x-bhp, but when people ask ‘will I go faster?’ they need to know how ‘real world’ top speeds and acceleration will change where it matters, on the road. So a simple ‘how many seconds does it take to hit 50mph’ test was carried out.

The PX125 was first up this month. It’s a completely standard machine, only a year old and with just 3500 miles on the clock. This is the last of the Italian geared two-strokes and therefore fitted with the cat-exhaust so I wasn’t expecting too much from it. I strapped the scooter to the dyno and after several runs was getting a consistent figure of 6.3bhp @ 6000rpm. Worth noting is how asthmatic the engine sounds in standard trim, there is a definite wheeze as it struggles to breathe through the air filter and catalyst exhaust unit. Then there’s the sheer lack of confidence when pulling out of a side-road, and onto a busy main road, then waiting for the scooter to build up to speed. I had already GPS’d the PX125 and can give guideline ‘top’ speeds of 45mph up an incline, 50mph on a flat, and 52mph down an incline (note: the speedo read 65mph when the GPS was reading 52mph – don’t trust your speedo).

I timed the acceleration of the scooter over half a dozen different roads/junctions, each time pulling away from a standard start and giving it as much ‘beans’ as possible, to see how long it takes to get the PX125 up to 50mph GPS speed, and the average time was coming in at around 29 seconds. This is a cause of great concern as you check your mirrors to gauge how fast the truck behind is closing in and desperately trying to pick up speed.

The LML 125 four-stroke is a popular little scooter, and one we happened to have to hand as the PX125 was being put through its paces on the dyno, so given that four-stroke autos of all shapes and sizes are becoming more interesting for the average scooter owner/rider, we thought a nice little extra to this test would be to compare the two. As you can see from the dyno graph, both scooters kick out roughly the same bhp but up to 35mph the auto is spanking the geared scooter for power and acceleration. The net result is that up a hill and on a float they do hit almost identical top speeds, but in terms of acceleration the auto gets there a lot quicker and feels like it has more low down punch. For that reason, the auto really does feel safer pulling out of junctions, plus… the auto seems to have a little more over-rev which allows it to just creep up to a top speed of 57mph down hills, whereas the PX125 was maxing at 52mph downhill.

Given that later on in this feature we will be porting standard cylinders, fitting big-bore kits, swapping cranks, clutches, carbs, gearing and so many other items… this first step seems like such a small one. However, it is the most common step any home tuner takes, and probably the simplest: the exhaust change! We have a number of exhausts lined up, and know from previous experience that most will come into their own once we start tuning the cylinder or fitting kits and cranks, but we wanted to show what happens with an exhaust-only test first.

The latest PX125 has a horrible cat-exhaust fitted, which is full of honeycomb sectioned baffles. This thing really does stifle the scooter, just to get it through emissions tests. It has to go, and this has to be the first step, because unless its MOT time, nobody wants this exhaust fitted to BGM177 or Malossi 166 kit! A 13mm nut at the stub end, and a 17mm bolt through the frame bracket is all it takes to whip it off.

In order to get the bolt out, I did have to deflate the rear tyre and wiggle the bolt.

The SIP Road 2 unit was the first item to adorn our Virgin Vespa, let’s call this the ‘gentle breaking in’ of tuning before we go hammer and tongs further in. The SIP exhaust is a piece of cake to fit, and comes with some nice extra springs to make sure the exhaust doesn’t vibrate loose at any point when out riding. As far as re-jetting goes, the rumour mills on Facebook and other pages usually consists of advice such as ‘go up a couple of sizes on the main jet’. However no matter what we tried, we couldn’t get the scooter to handle a bigger main. The simple fact was, when we switched from cat exhaust to SIP exhaust, the main jet and top end remained rich, mid-range was borderline okay, but the bottom end at a quarter throttle was astonishingly weak. I used a 120 air-corrector and a 50-100 pilot to bring this area up to strength and thus prevent any nasty heat seizures at quarter throttle.

From a standard Piaggio cat-exhaust to the SIP Road 2 we gained 1.5bhp at peak power (6000rpm) and nearly 1000rpm of over-rev. As a scooter increases in speed, it needs more power to push through the increasing wind resistance and 7.8bhp still isn’t enough to be making big gains in top speed. So back out on the road, with GPS ticking away, what have we gained in real world terms? Well we have reduced the 0-50mph time from an average of 29 seconds to an average of 20 seconds! This is great news when pulling out of junctions and accelerating away on busy roads.

A simple exhaust change has provided 1.5bhp and 1000rpm more in each of the gears. The scooter will over-rev on downward inclines to 57mph, an improvement of 5mph.

It’s a small gain, but it’s an easy gain. At £120, if your old exhaust is shot and needs replacing then the SIP Road 2.0 makes sense. It’s easy to fit, any home mechanic can do this no problem and the scooter will accelerate to 50mph about nine seconds faster, as well as gain a couple of mph on downhill sections where over-rev comes into play.

There is a very cheap and very simple tuning procedure for the PX125 cylinder and head which can be used to gain more power, in situations where tuning kits might not otherwise be affordable. Next month we will look at that procedure, before then fitting more tuning items to see what gains can be made. Stay tuned.

Thanks to SIP Scootershop for their support on this article.