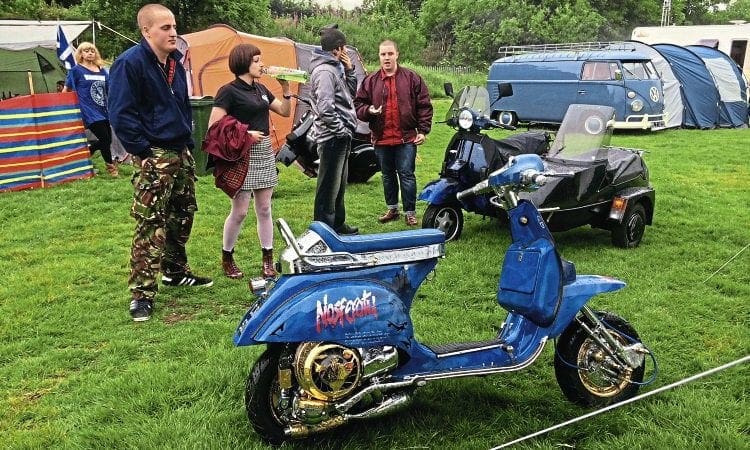 To those who spent their formative years on the scooter scene during the 80s, certain custom scooters epitomise everything that made the National rallies so appealing…

Full blown custom scoots, chops and cutdowns were at the height of their popularity. Individual taste coupled with impressionable young minds ensured those doing the rallies on a tight budget invariably had a favourite custom — a dream machine, the scooter they aspired to own. Following the screening of the 1922 black and white silent movie Nosferatu on British television, Redditch based Mike Davis built a custom Vespa chopper with the unofficial, early big-screen take on Bram Stoker’s book, Dracula, as the theme. For a time during the mid-80s Nosferatu, ridden by owner Mike, was seemingly an ever-present fixture at National rally destinations.

As a young scooterboy in the 1980s, Ramie Stewart was totally blown away when he first set eyes on custom chopper Nosferatu. It was the scooter that Ramie always wanted to own and it certainly was an inspiration to him and over time he built himself an impressive private collection of scooters.

By then fellow Dundee Stars and Stripes SC member Ally Bell had bought Nosferatu from Mike: “I think it was ’86 when I first saw Nosferatu in Dundee, I fell for it there and then. Ally had experienced some engine problems going to Morecambe rally ’87 which resulted in him crashing the scooter. He sold it on after that, to Andrew Hart owner of my local Scooter shop in Dundee. Nosferatu spent the next 28 years in the window of Andy’s shop.

“It felt at times like Nosferatu was mocking me, it was so near yet just out of my reach. I enquired about buying it many times. Eventually, I went to the shop with a massive wedge of cash and Andy finally relented. That was around four years ago. Despite having been housed in the warm, certain areas of plating and paintwork were beginning to show the ravages of time. Nosferatu had remained more or less untouched, engine apart, for 40 years. I’ve had most of the plating refurbished as well as adding a few more plated parts. I’m in the process of adding more engraving, and some additional gold plating. Paintwork is the same as it was when Mike built it but there are a few places that are perhaps in need of retouching with a bit of careful airbrushing. An outside consideration is to have Nosferatu completely repainted; on the other hand as some of my mates have pointed out, it is what it is, leave it as it is — it’s the original iconic Nosferatu chop.

“I’m undecided as yet, although if anything, I’m leaning towards perhaps retouching with an airbrush where required. I got to meet Mike Davis at Kelso rally a year or so ago; we’d been in touch beforehand and Mike pleaded with me to take Nosferatu to the rally. At the time I’d just finished my custom GS Bonnie and Clyde, Kelso was its first time out. I had a good chat with Mike about Nosferatu, he expressed an interest in buying it back. At that time it had taken me 28 years to buy it myself so I wasn’t interested. Now I’m a single man again, who knows what decisions I may take regarding any of the scooters in my private collection? Maybe, just maybe, at some point, I may consider selling Nosferatu to Mike.

“In retrospect, I wish I had ridden Nosferatu to Kelso rally so Mike could have seen the iconic custom Vespa chop he built up those years ago.”

Living up to the implications of the name bestowed upon it by its first owner, builder and rider, Nosferatu, the iconic 80s custom, rides again. Decades after it first appeared on the National rallies it’s back on the highways and byways where all made to be ridden, not hidden, scooters belong.

Funniest experience with a scooter: Going to rallies in the 80s and a few of us going into garages and filling up and driving off without paying. Once we did it and we drove off only to discover there was a bloody traffic jam on the main road and we couldn’t get out of the forecourt…
Furthest you’ve ridden on a scooter: Margate, Brighton.
What do you dislike about rallies: Too many people busy slagging others off for what they wear or what they ride, even how they got there. If you’re there… support the scene! Life’s too short at this age. You never know the previous rally you were at might be your last, enjoy every minute… no regrets.

Any modifications: It has a lot of one-off parts, Lambretta forks to fit a Vespa, Lambretta mudguard, toolbox cut-down to fit the trimmed legshields, one-off metal seat fully engraved, sunken number plate, lots of other little one-off parts all around the scooter. All work done by Mike.
Paintwork: All the paintwork that was carried out in the 80s is still holding up well, I haven’t been tempted to get it touched up or redone. As my mates tell me, the scooter is what it is and it’s original – so why not just leave it as it is?
Engraving: By Don and Pete Robinson.
Overall cost: My life… lol.
Hardest part of the project: Trying to buy it from Andrew Harts Scooter shop, Dundee, where it’s been sat in the window of a heated showroom for about 28 years.
Is there anyone you wish to thank: Andy and Bruce Hart for letting me eventually take it home. And not forgetting Andy Nixon for nippin’ Harty’s head for years fir iz…