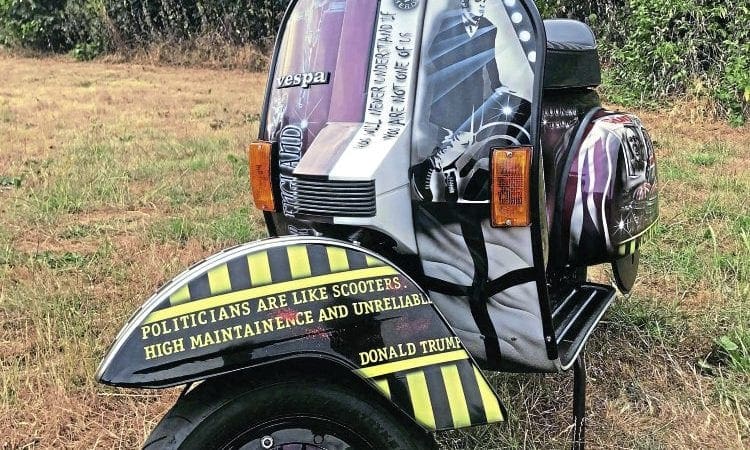 Young scooterist; Fynlay Kirby was seriously injured in a road traffic accident and his pride-and-joy Vespa PX was damaged beyond repair. Yet thanks to his own determination and the help of a fantastic set of family and friends he is travelling down the road to recovery.

Fynlay is an apprentice mechanic who has a bright future ahead of him. But on May 16, 2018, this was all nearly shattered when he was riding to work on his beloved scooter and he was hit head-on by an uninsured driver. The driver drove away from the scene and left Fynlay lying seriously injured in the road. Fynlay was rushed to hospital where he received immediate life-saving medical treatment. The serious nature of Fynlay’s injuries meant that even though he made it through a five-and-a-half hour operation, he was left with rods and plates from his hip to his knee and a plate in his wrist. After the initial operation Fynlay then spent eight days recovering in intensive care with his mum Paula and dad Robin by his side supported by his brothers, Leighton, Lewis and Jackson.

When Fynlay returned home he had to use a full body frame to walk and needed extensive physiotherapy. However, he was determined to make a full recovery and get back to work, and of course he was also devastated at the loss of his scooter. So to help Fynlay get back onto the road for when he’d made a full recovery Paula and Robin, and Mark ‘Milky’ Watkins put a plan into place. The plan was that if the parts could be obtained, then hopefully Fynlay’s new scooter could be completed within six weeks, and with Fynlay’s confidence permitting, and the ‘thumbs-up’ from his medical team he would be able to start thinking about getting back on the road and getting back to what he loves the most: taking part in scooter ride-outs and going on scooter rallies.

Paula said: We managed to pick up a donor frame but it was just a frame, and there was a lot more we needed to do; and to organise if we were going to get Fynlay back on the road.” With this in mind, Paula reached out to the scootering community through social media and contacted friends and colleagues alike. Paula politely asked if there was anyone who had surplus PX125 bits knocking around and if they were willing to donate them to Fynlay to help build his scooter could they let her know.


Paula said: “Most of my friends are aware that my husband Robin ‘Dobin’ Tidd is a scooterist and a mechanic so they knew he would be able complete the work. But I also asked that if anyone had even just an hour or so free then Robin would appreciate the help of any additional hands or support, which would help the project along.”

Being an apprentice, Fynlay was not in receipt of any wages after the accident. So if people weren’t able to help in person Paula also asked that if anyone was willing to make a donation of £1 to help fund the project then this would be greatly appreciated; and any monies, which were over-and-above the funds needed would go to an armed forces charity.

The response was fantastic; and with the support of ‘Milky’ it really started to take shape,” Paula explained. “Gatch Rivett offered to complete the artwork on the scooter for free, Ricki Davis of RPM scooter parts helped out with a generous donation of parts and the main proportion of the build work was completed by Robin and his pal ‘Macca’,” Paula added.

I spoke to Gatch and asked him how he’d come to be involved: “I’d been helping Milky out with some artwork on the production of a scooter for the ‘Project Cancer’ Lambretta charity raffle, which he was connected with. During our conversation Milky told be about what had happened to Fynlay, which was terrible; especially with the fella leaving him for dead in the road. I couldn’t just stand by and not get involved.” Gatch explained that Paula organised to get the body panels prepped and ready for him to work on and in the meantime, Gatch discussed with Fynlay about how the theme of the scooter would be delivered.

Fynlay explained that the artwork on the scooter blends his passion for the skinhead and two-tone scenes. The cult image of the mural of ‘The Last Resort’ and a skinhead crucifixion appears on the offside legshield, which is supported by two-tone dance graphics on the corresponding side of the front mudguard. On the nearside legshield there is an image of a skinhead wearing his Crombie, which was an image Fynlay had specifically chosen for Gatch to put on the scooter and Gatch has added his own flavour to it. The toolbox shows Fynlay’s scooter club, The Donald Trump SC, which is supported by a light-hearted graphic representing the unreliability of politicians and scooters, and adds to an element of positivity flowing through the scooter.

There’s a ‘main tribute’ mural, which is to Milky on the nearside sidepanel, in the form of Milky being ‘captured’ in a photo on the front page of The Sun. Explaining this mural, Fynlay joked: “What is more unique about the picture is that Gatch has captured Milky in a rare moment when he was smiling!” However, on a more serious note and in true appreciation of Milky’s help, Fynlay has made sure that the headline of the newspaper next to Milky’s picture has the comment ‘Legend’. “If it hadn’t have been for Milky I don’t think I’d have got anything like the quality of the scooter that I’ve got,” Fynlay added.

There are the names of Ricki Davis, Key Hawkes and Fynlay’s dad subtly blended into the artwork. All of which are an acknowledgement of appreciation from Fynlay for the support they’ve given him throughout his recovery and the building of the scooter. An emotive but again, light-hearted mural appears on the offside sidepanel, which is a self-reflective vision from Fynlay of his own personal journey; past, present and future, along with the evolution of the skinhead culture from cradle to grave.

Fynlay explained that during the conversations he’d had with Gatch about the artwork, he’d said that one day he would like to own a ‘Toxic’ scooter. Happy to assist, rather than signing his name on the scooter, Gatch added a small ‘Toxic’ endorsement to the theme.

With the bodywork returned, it was up to Robin and ‘Macca’ to complete the rebuild and get the scooter road-ready. Fynlay finished by saying: “I’ll always be grateful for the help I’ve received in the building of Evolution. The scooter is a reflection of my determination, passions and recovery from the accident. The help I’ve had throughout the whole event’s been amazing and even when we offered to pay for the parts we needed, we were told: “Let the scooterists help.” I’m just about fixed now and Evolution acts as a constant reminder of what being part of a community actually means.”

Name: Fynlay Kirby
Job: Apprentice mechanic.
Scooter club & town: Donald Trump Scooter Club, Leicestershire.
How and when did you first become interested in scooters: Mum and dad have always had scooters. Dad (Robin Tidd) repairs them.
What was your first scooter: PX125 (unfortunately in scooter heaven due to my accident).
What is your favourite scooter model: Lambretta Li 150.
First rally or event: Skegness 2015.
Any stories: The crash!
Favourite rally: My favourite has always been the Isle of Wight. I love the atmosphere of the scootering scene and people on a closed site.
Funniest experience with a scooter: Allowing scooter mechanic Ian ‘Macca’ Mackie to ride my scoot at WoT rally 2016 and punctured both wheels!
What’s the furthest you’ve ever ridden on a scooter: 240 miles round trip to Mablethorpe, luckily it was the driest part of the rally!
What do you like about rallies: Meeting new people, seeing the amazing work that scooterists have done to their scooters, the custom shows, and the ride outs.
What do you dislike about rallies: Absolutely nothing to dislike.
What’s your favourite Scootering magazine feature: People’s stories and the projects they have undertaken. I also love the rally pictures of scooterists caught unaware of the camera pointed at them.
Your favourite custom/featured scooter of all time: Neil Castle’s ‘Man & Machine’.
If you had to recommend one scooter part or item of riding kit what would it be: A decent helmet.
What’s the most useless part you’ve ever bought for one of your scooters: My air horns! They worked when they wanted to without me touching the switch, to the disgust of my neighbours and passing public (faulty switches x 4!).

Name of scooter & reason: ‘Evolution’. This is due to my accident and being a reference to a survival of the fittest.
Scooter model: PX125.
Date purchased & cost: April 2018 and the frame cost me £100 (saved from my apprenticeship wages). The rest of the cost of Evolution came from the generous donations of friends and the scootering community.
Inspiration for project and theme: Mark ‘Milky’ Watkins and the talented Gatch Rivett have been my inspirations from the start of the project to the finishing touches. Definitely the experts in the know with plenty of advice regarding murals.
Time to build & by who: From start to finish, one month! All paintwork by Gatch Rivett and engine rebuild from scratch by Robin ‘Dobin’ Tidd and Ian ‘Macca’ Mackie.
Engine kit: DR 180.
Crank: Standard. Carb: Si 2220. Exhaust: SIP road. Clutch: 22 teeth standard. Gearbox: standard.
Describe engine performance, power delivery and scooter handling: Performs and handles like a dream.
Top speed & cruising speed: Top: 65mph. Cruising: 55mph.
Is the scooter reliable: Yes and if anything goes wrong, I have my dad on hand!
Paintwork & murals done by: Gatch Rivett.
Is there any powder coating: Rims and backrest (local firm).
What was the hardest part of the project: Not being able to help with anything due to the severity of my injuries and time in hospital.
Is there anything still to add to the scoot: Yes, a custom show win!
In hindsight, is there anything you would have done differently: Add a Pinasco kit (but ran out of money!).
Is there anyone you wish to thank: Robin ‘Dobin’ Tidd, Ian ‘Macca’ Mackie, Gatch Rivett, Mark ‘Milky’ Watkins, Ricki Davies, Key Hughes. I will be eternally grateful. To the following for donations of money: Arthur Reynolds, Moby Willmott, Michael Robson, Adam Gray, Sam & Pete Gray, Paul Nagle, Anders Poulson, Stian Kaurel, Hans Blom, Carol Morgan, Ruth Goodridge, Stephen Saville, Craw Clark, Ross Perriman, Brendan Farrell, Jon Betts, Steve Hunter, Michael Hunt, Darren Wallace, Chris Abrams, Keith Taylor, Carla, Vicki, Sally, Hugh, and Michelle & Michelle.