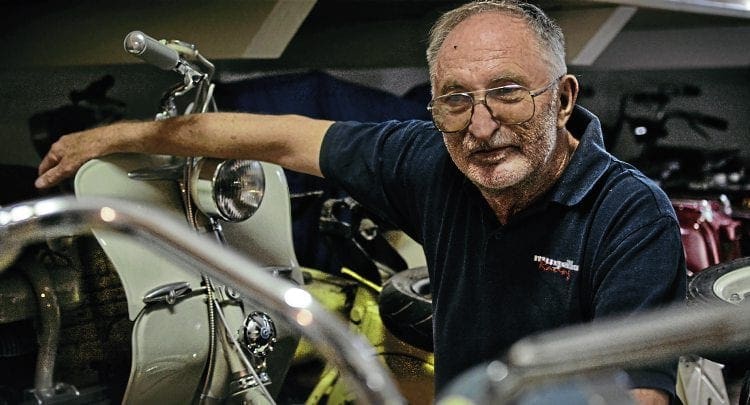 Following on from last month’s look at the man behind the myth, our Italian roving reporter Christian Giarrizzo examines a few of the Lambretta products which have become part of the life’s work for this enigmatic man. 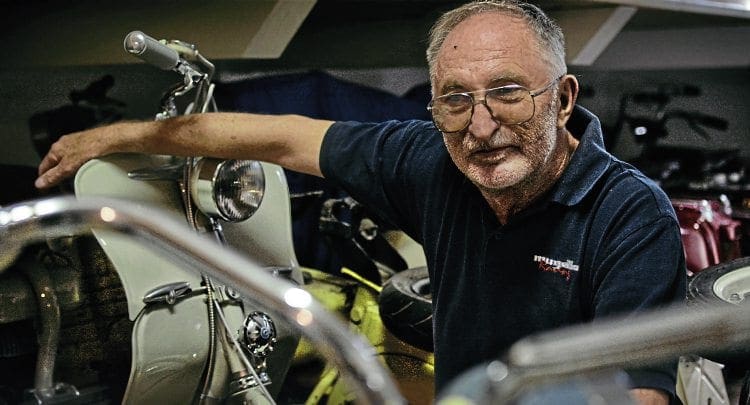 Entering the underground labyrinth of Ti no’s world reminds me of a visit I made a few years ago to the premises of Morgan. I find many similarities between the two environments. They both give so much effort to the beautification of historic products and retaining inherited forms from the past. Tino Sacchi does not want to forsake the lines and style of the Lambretta design, yet on the other hand, the opportunity to explore new experiences is overwhelming. Here he opens up his archives to share details of some products past, present and future. The Targa-Twin has gone from 250cc to 275cc — the previous model had a two-cylinder 28hp engine with a 250cc displacement. Compression was 8.6:1 and it had two Dell’Orto 26mm Power Jet carbs. It also had Varitwin-electronic variable ignition, special five-plate clutch and carbon silencer. The engine could be installed without modifications to the air filters or bodywork.

The new ‘works’ upgrade (upon request) has an engine displacement of 270cc with 28mm carburettors, 10:1 Compression, special six-plate clutch and primary drive belt.

Thanks to over 130 Targa engines sold (not bad for a company that is effectively run by just one person) it has become the flagship of the Lambretta.it product line. Now oversized at 275cc compared to 250cc of the first version, it also has two 30mm carburettors instead of 26mm. Other subsequent changes have made the engine better able to cope with higher levels of torque and strong power delivery. This is an engine that is capable of pushing a Lambretta over 96mph with its 32bhp.

Additional aesthetic modifications, such as the removable silencer and other small details suggest that Sacchi is not only interested in the technicalities but also in respecting the historic physical form of the Lambretta. He says about this product: “Consider the Lambretta chassis. I prefer never to exceed 30-32bhp with an engine for the road; I think it’s mandatory to have fun but with safety. Higher power levels can create heavy damage to the frame with consequences for the user that you can imagine.” I ask whether anyone tested the twin-cylinder on a long trip and Tino responds laughing: “Yes, many… even me!

I personally went to England, France, Spain, Greece and of course throughout Italy to attend some events. A total of over 40,000km.” The motor is very generous and suitable for touring; the utter smoothness and lack of vibrations ensure great comfort over long distances. The real value of this product though, in my opinion, is the assembly within the frame. 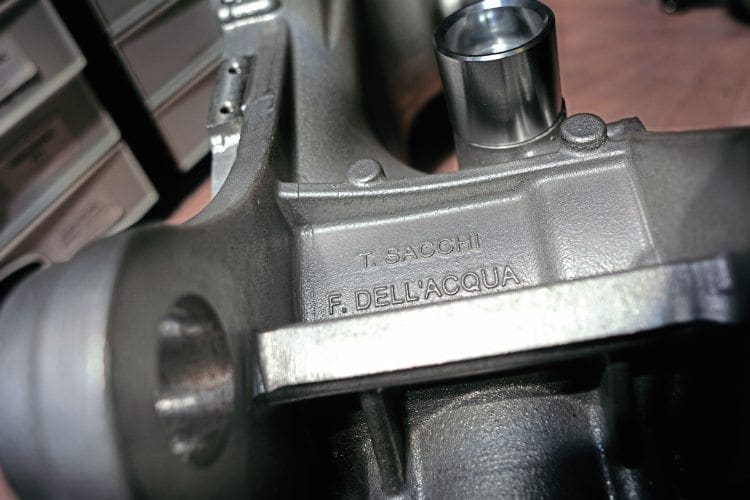 Designed with the utmost respect for the original form, it can be installed without changing any part of the chassis. Genuine Innocenti engines and frames are no longer so easy to find; with this two-cylinder engine the problem might be solved. Keeping in place the fuel tank and the original glove box, the carburettors are just meant to be ‘tailored’ within the existing space.

The Targa-Twin was the result of a collaboration between Tino Sacchi and an engineer who works at the Brembo factory, Franco Dell’Acqua. He was a great proponent of safety and reliability, which meant he was on the same wavelength as Lambretta.it from the outset. The duo settled on a 50/50 collaboration that was protected by a mutual respect and perhaps more importantly by a solid friendship.

Tino explains his idea behind the project: “Designed to solve the problems that might occur while tuning up your old original casing, this item is produced by sand-casting, following the procedure which Innocenti or Piaggio would use. The process starts with a 3D prototype and subsequently created by means of two sand moulds, which guarantees durability and tenacity more than die casting (a much more refined craftsmanship which would obviously increase the costs).

“To the detriment of the lower-finish surface compared to more modern methods, the texture that characterizes these casings gives a very unique aesthetic. On the other hand don’t forget that this type of casting is still used to make Ferrari engines. The idea behind a casing of this kind is also manifested again in my will to work inside the engine with greater ease of execution, and with the possibility to mount the most high-performance components.

“The original Lambretta motor is based around a crankshaft designed for 125, 150, 175 and 200cc, without really changing its dimensions.” The original 200cc casing, according to Tino, is subjected to stress close to the mechanical limits. “It is therefore intuitive that if power grew from 11hp to almost 35hp an original crank would not guarantee reliability and performance.”

The new casing was conceived to support four times more power than the original one. The crankshaft used in Tino’s tuning kits is 33% bigger and nearly 40% heavier. The casing also ensures a very solid main bearing support without bending the crank — no danger in case of heavy-tuning.

“The next thought during the development and construction was to design a new adapter which you could extract from the drive side, giving the ability to replace the main bearing and its oil seals without splitting the casings. This is one of the most frustrating and money-consuming problems ever: to dismount and divide the motor just to replace a spare part worth four euros.

“Our new product resolves this problem. Additional ribs give improved heat dissipation, even with heavy tuning. At the customer’s request, you can also move the loops that host the silent blocks to adjust the position of the motor to the chassis.”

One of the few Lambrettas you notice while entering Tino’s garage is equipped with a braking system which he defines as “exclusive”. The classic front disc brake mechanical system, supplied by Innocenti, operates on a spiral that is implemented through the lever and the steel wire. “My solution instead provides the use of a hydraulic cylinder. The system is composed: the first part of the transmission is still using a cable, which routes under the headset, then the frame tube — behind the wheel — coupled with an inspection box equipped with an aluminium cover in which there is an hydraulic-pump. The client then may trap the cable from the lever and plug it into the box provided by microswitch for the brake light. An hydraulic hose from the pump runs towards the brake pads. The most interesting advantage is, one more time, the installation which allows you to mount this device avoiding welding any bracket to frame or change the original Lambretta handlebar. It is sufficient to use a clamp (included) which, like a crab claw, fits on the plate of the pump-case. This provides a suitable solution to avoid the classic motorcycle configuration in which the hydraulic reservoir is placed directly on the brake lever housing, and requires subsequent changes to the switches or even worse by welding plates around to try and make it all aesthetically pleasing.”

Sacchi’s idea instead discreetly hides all the modifications to fit between the existing Lambretta curves. As far as the braking ‘behaviour’ is concerned the reaction is far less abrupt, yet very effective, avoiding the danger of locking the wheel. “A superior brake system suitable for everyone, from senior technician to simple enthusiast,” says Tino. Another special feature is the mounting plate of the pump now interchangeable with the original Lambretta disc-brake. From an aesthetic point of view, everything remains 90% unchanged. Lighter and air-cooled discs are available at the store if needed.

What’s new on cylinder-kits, and the Super Misano?

Up until just a couple of years ago, aftermarket cylinder kits were still being developed and designed with the original studs and spacing configuration. Threaded rods at the ends that had the task of keeping the cylinder-head compressed and attached to the aluminium casing. The main problem with this setup was that the passage of these elements within the body of the cylinder disturbed the flow of the exhaust and intake ports, limiting the possible modification or the new installation of more beefed-up articles.

During the tests it emerged that in the case of an aluminium cylinder-head the traditional studs-system, if subjected to high temperatures, would deform the aluminium cylinder and thus compromise the performance and reliability of the whole motor.

It was therefore decided that to solve this problem, we would create short studs at the base of the cylinder, using stronger and smaller components. This is how the Super Monza and Super Imola are designed: mounting two long and two short studs that give way to the exhaust-booster sub-ports.

In the next version of the Super Monza engine, which it is going to be called Super Misano, the casing and the cylinder will couple by means of short studs, built even further away from the cylinder. This will then provide space for the designer to investigate and design multiple ports and flows.

Super Misano will be a 33/34bhp engine, perfect for use out on the road, with refined and silky smooth power delivery but which will also have the capacity to accommodate modifications which take it up to 44hp+ should the owner desire these high outputs.

A product that can be installed directly by the customer or by a trusted-high-level technician of Tison’s, in Torino, Italy. He will also set up various customisations when required… the customer can choose.

It doesn’t stop there, as if Tino hasn’t achieved so much already and brought so many high quality products to the hands of the passionate enthusiast… his mind is always working for a newer and better item, the next level to inspire passion. He outlines just one last delight, while we were sworn to secrecy around the others…

A 220cc engine, four-stroke, low consumption design. Equipped with a Desmodronic-head, producing 22hp. This unit is designed to protect the ‘Lambrettisti’ from possible backlash of politics, currently painting a bleak future for two-stroke scooters. On the other hand this product will be appreciated by all those long-distance travellers who don’t think too much about pole-positions but still want to travel safely without consuming too much gasoline.

Of course higher outputs can be achieved, but that is not the planning behind this unit; this engine takes us into the future. 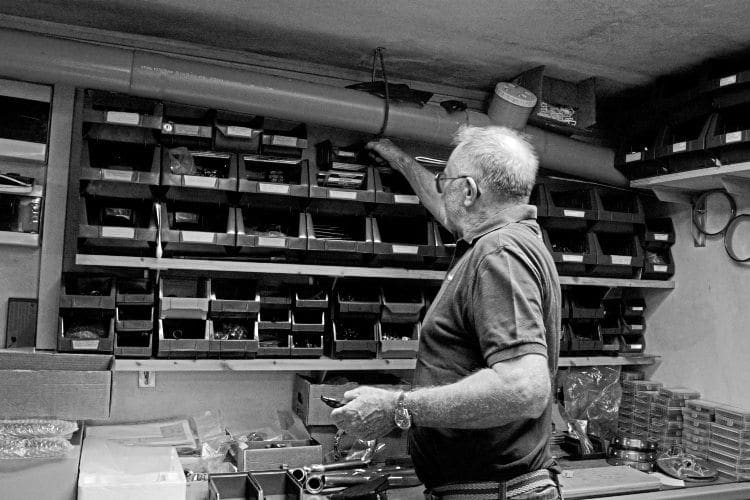 I ask Tino: a customer contacts you and is wanting to travel around the world three times by Lambretta, what engine would you suggest to him?

Tino replies: “My answer may surprise you, but I would say a Mugello 186, because it is a very underrated engine that I would call super-robust! Although it is not a race-performance propeller, if paired with the right carburettor, it would provide enough power to travel with all the luggage a traveller would need, while cruising on the tarmac at 110kph and maintaining excellent fuel economy.

“It is ideal to enjoy the ride, safely without to many stops at the fuel station. Performance, economy, reliability and all parts are available ‘off the shelf’. The more exotic option is the Targa-Twin engine for its smooth, zero vibration delivery of power, but at the slight expense of consumption. The choice is beautiful.”

Thanks to Tino for this interview