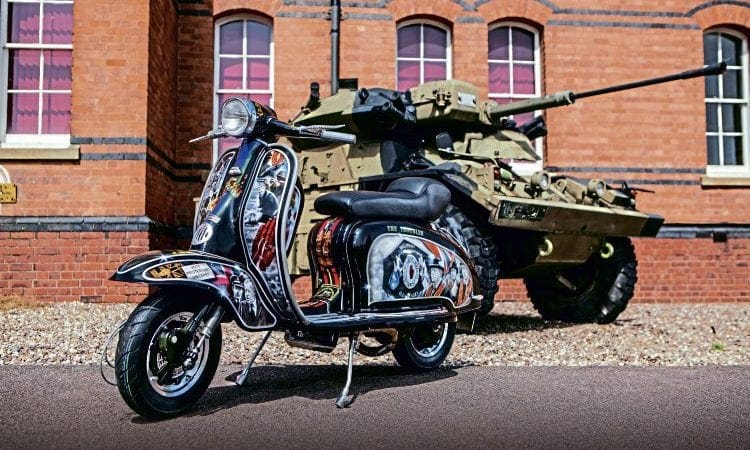 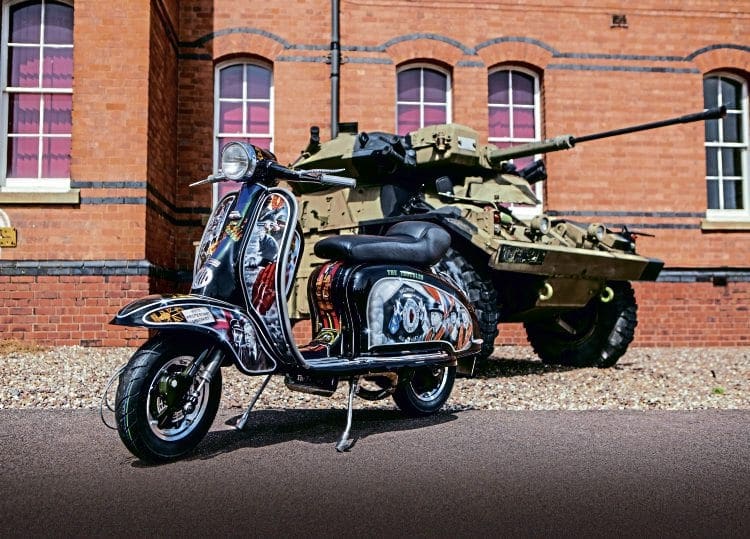 Irish politics are among the most complicated and intractable in the world, so why would anyone even attempt to portray them on a custom scooter? Like most soldiers of his generation The Troubles’ owner, Aaron Mitchell (‘Mitch’), is a veteran of Operation Banner, the British military deployment to Northern Ireland. Having joined up as a boy soldier Mitch found himself in Belfast at the tender age of 17 and the Army’s 18th birthday present to him was his first operational patrol.

Unsurprisingly this, and subsequent tours, made a lasting impression on him. Although he’s a serial builder of custom scooters it’s taken a while for him to find the focus he needed to bring this idea to light. “I wanted to reflect my own experiences in Northern Ireland but in a non-judgmental way. Each side of the troubles gets equal coverage with the British Army running as a thread between the two.” 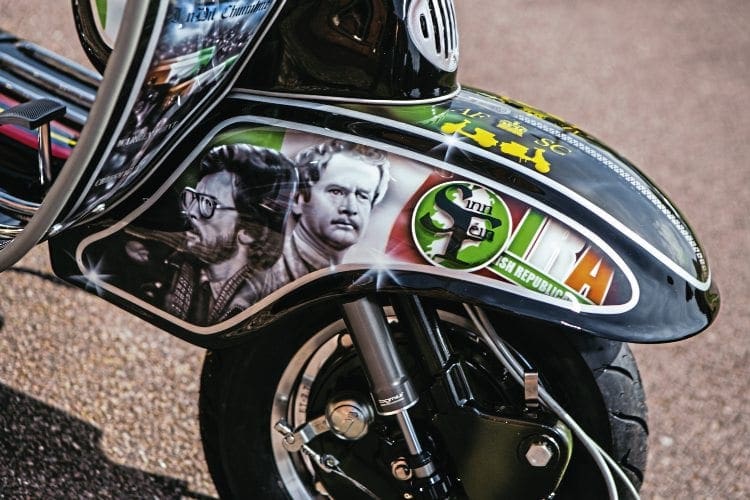 That, basically, was the intent of Operation Banner but of course intent rarely reflects reality and Scootering has no intention of getting drawn into a debate that’s confounded some of the world’s greatest diplomats. For Mitch, using his personal experiences to try and present a neutral portrayal is commendable and ironically, given the strength of feeling on all sides, probably controversial in itself.

The base machine was a rather neglected Series 2 and its panel work beyond salvation, which Mitch replaced with a full fibreglass set from Leicester-based GRP Scooter Parts. GRP has featured in a recent edition of Scootering and Mitch is a big fan of their products: “Fibreglass has come a long way from the ropey copies of years ago. I’ve used it a lot on previous builds and it’s proven very practical. I’ve had a couple of ‘offs’ with no damage at all, it seems to absorb the impact and bounce back.” 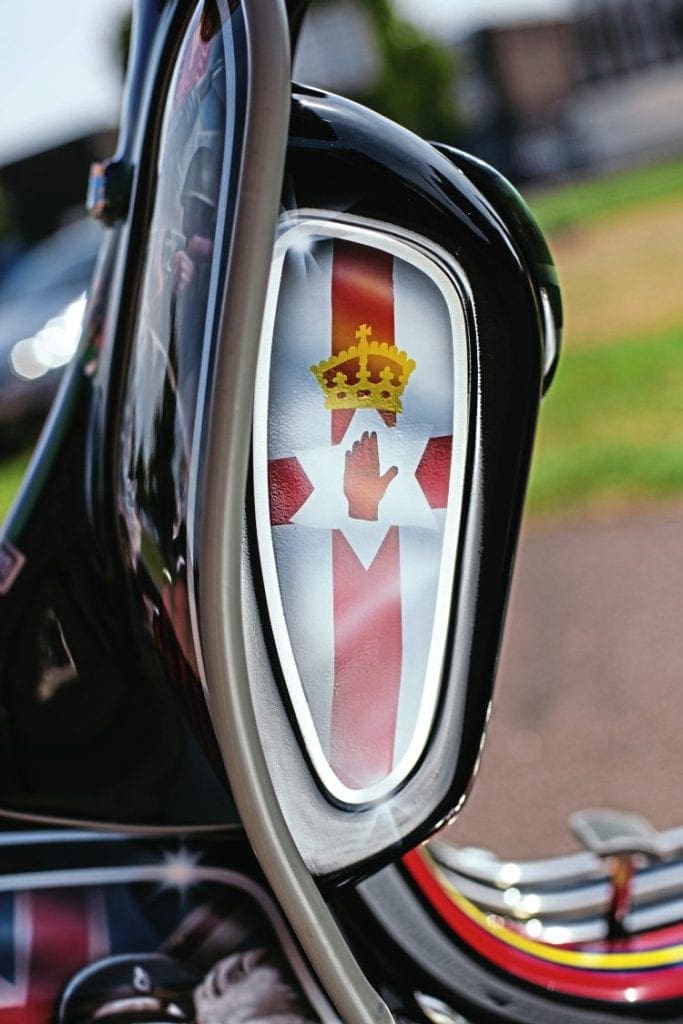 The frame required some loving care and this, together with the panels was dispatched to Frazer at Envy Custom Paint, who is also based locally in Leicester, to work his magic. Mitch has used Frazer for previous customs and is a big fan of his work. “Frazer is not only a great artist he’s also reliable and sticks to time constraints. Unlike other custom painters he’s also happy to take a rough frame and get that right before starting. Much easier than messing around with various bodyshops. Before an airbrush went anywhere near the scooter he’d already worked miracles with the frame.” 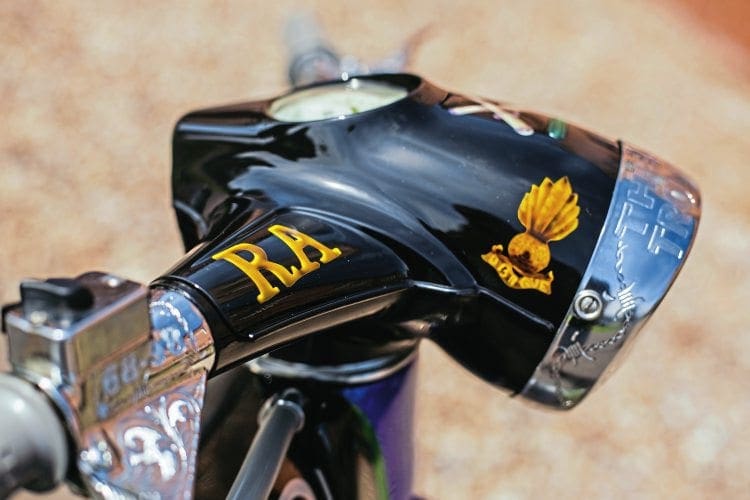 The artwork on The Troubles is nothing less than stunning and extremely well thought out. Running along the scooter’s centre line, front to rear are tributes to the 31 Field Battery, Royal Artillery, Mitch’s former unit. The front mudguard is painted to represent a combat jacket with the zip forming the centre line. The horncast’s colours are those of the Campaign Service Medal awarded for service in Northern Ireland, with the medal clasp above the horn grille. Here lies a stroke of genius, imperceptible until pointed out but obvious once you’re told it’s there. The horn grille is painted to represent the medal and although the slots aren’t really wide enough to show it clearly, the Queen’s effigy is definitely there. That’s proof of the painstaking attention to detail in this build. The coloured stripes represent Mitch’s uniform stable belt, the buckles of which are so convincing that it’s hard to accept that they aren’t securing the toolbox lid in place. A screaming rat in army camo brandishing a rifle bursts through a Union flag on the leg shield toolbox. This is Mitch’s own unit deployment badge and is taken from a tattoo on his arm. Finally a beautiful depiction of the Royal Artillery crest has been tooled into the bespoke seat covering. 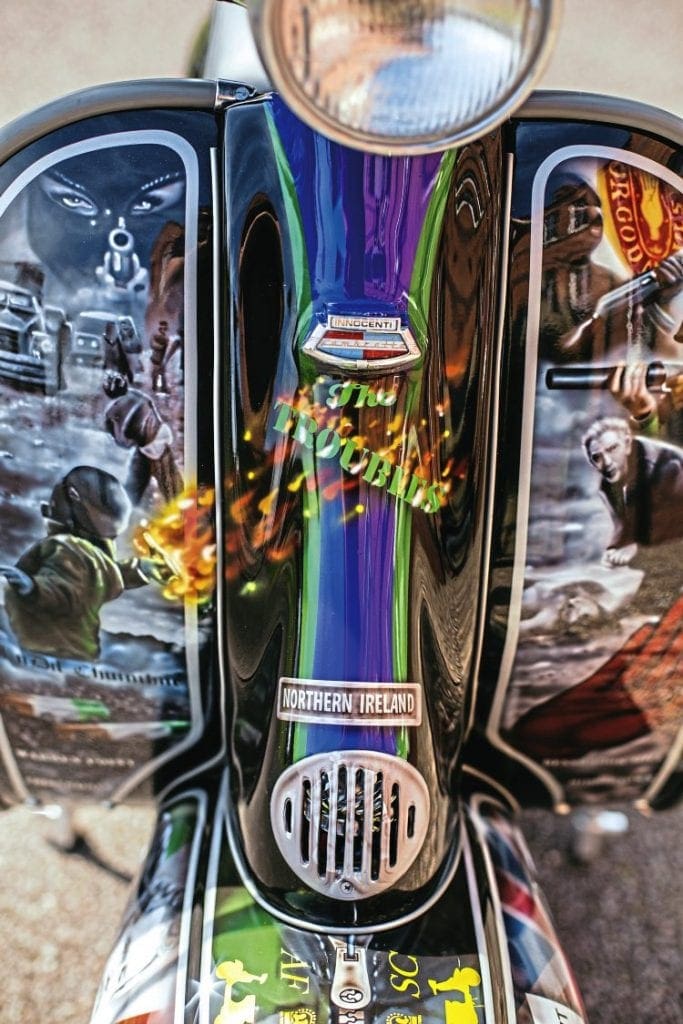 Each side of the scooter depicts iconic figures from both Unionist and Nationalist politics together with their symbolism. The legshields are particularly hard-hitting, showing that Mitch wasn’t afraid to tackle the more unsettling aspects of this period. Anyone who’s visited Belfast will recognise this style as, intentionally or not, they are very reminiscent of the huge murals to be found adorning walls in both communities.

If the murals weren’t enough, plating by Quality Chrome sets off engraving by Adi Clarke and the whole ensemble is propelled by a RT230 unit from Mark Broadhurst. 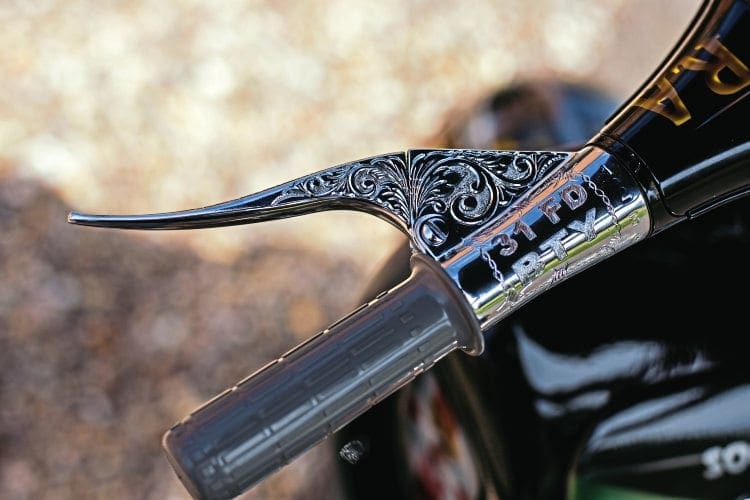 Debuting at this year’s Bridlington show, The Troubles may provoke strong feelings but it deserves to be recognised first and foremost for what it is — a truly remarkable custom Lambretta.

First interest in scooters: Early 80s as a youngster seeing a mass of scooters flying down to Yarmouth.

Furthest ridden: Possibly Margate, although I did Brighton ‘Deckchairs at Dawn’, there and back in a day, saddle sore doesn’t even begin to describe how I felt.

What do you like/dislike about rallies & events: Too many non-National rallies.

Inspiration for project: My tours served in Northern Ireland.

Time to build & who by: Three months by me.

Specialist parts/accessories: All bodywork is fiberglass by Chris of GRP Scooter Parts, Leicester. One-off fuel and choke levers are made from 7.62 rounds. BGM suspension.

Advice to anyone starting a project: Save your snack money, you may need it.

THE TROUBLES AND OPERATION BANNER

The Troubles’ is a commonly used term to describe the 30 year conflict in Northern Ireland which raged from 1968 to 1998. Although labyrinthine in nature, the central issue was fairly simple, a debate about Northern Ireland’s constitutionalist status, a question that still remains unresolved. The Unionists, mainly Protestants, seek to remain part of the United Kingdom, whereas the Nationalists, or Republican movement, believe in a united Ireland. The difference between now and the period covered by the Troubles is that both sides have agreed to continue the debate by political, rather than violent means.

Following a civil rights march in October 1968, tension between the two communities escalated into violence. By 1969 the situation had deteriorated to a point that the British Government decided to restore order by deploying troops, subsequently referred to as

Operation Banner. The first deployment was made on August 14, 1969, but it wasn’t until July 31, 2007, that the operation was finally stood down, making it the longest ongoing deployment in British military history.

Operation Banner remains something of a forgotten conflict, yet its scale was staggering. At its peak in 1972 there were 27,000 military personnel based in the province. Putting that number into perspective it’s a thousand more troops than were assembled for the 2003 invasion of Iraq, and the peak British military deployment to Afghanistan was around 9500.

The number of deaths caused by all sides in the conflict will never be truly known but it’s thought to be in excess of 3600 with at least 50,000 being physically injured.

Frazer Day of Envy Customs is the artist behind The Troubles. A third generation professional artist, Frazer comes from a family well known in fairground circles. “I started painting when I was eight years old,” explains Frazer, “helping dad with his sign-writing and traditional fairground art. I was coach painting lorry cabs by 11, spraying by 12 and airbrushing by 14.” With a reputation across Europe for high quality fairground work, why transfer to scooters? “Last year airbrushed a huge fairground ride in a supermarket car park in November and as I get older working on projects indoors is very attractive!” Fraser is largely self-taught and he sees this, combined with being a relative newcomer to scooters, as a big advantage when creating something fresh. “I’m used to looking at spaces and shapes, determining what suits them best — I’m not restrained by any thoughts of what has been and what could or should be done to a scooter.

“Being a fairground artist couldn’t be further away from being a scooter painter. I’m now working at a level of detail that’s fresh to me. The tiny

strokes required to paint beards and eyelashes are a far cry from the giant sweeping movements I would have normally used on a massive piece of ride scenery. With a few more in the pipeline and even a beach buggy I’m looking forward to getting my teeth into the next project.”

Frazer has an interesting explanation of how his work on fairground rides translates to the smaller canvas 01 a scooter “On fairgrounds everything needs to be `turned up to 11′. It’s about creating an instant visual impact but surprisingly that doesn’t always mean bright colours and garish images.

“Take ‘The Troubles’ for example, there’s a lot going on there but it’s an easy thing to look at. There’s a mixture of monochrome and colour images but that’s not due to the source material, it’s a fairground trick. The eye finds it easier to absorb things set out that way. The Troubles has a wealth of detail but as a whole it can be viewed quickly. The subject is challenging but the artwork leads someone gently around the scooter.” 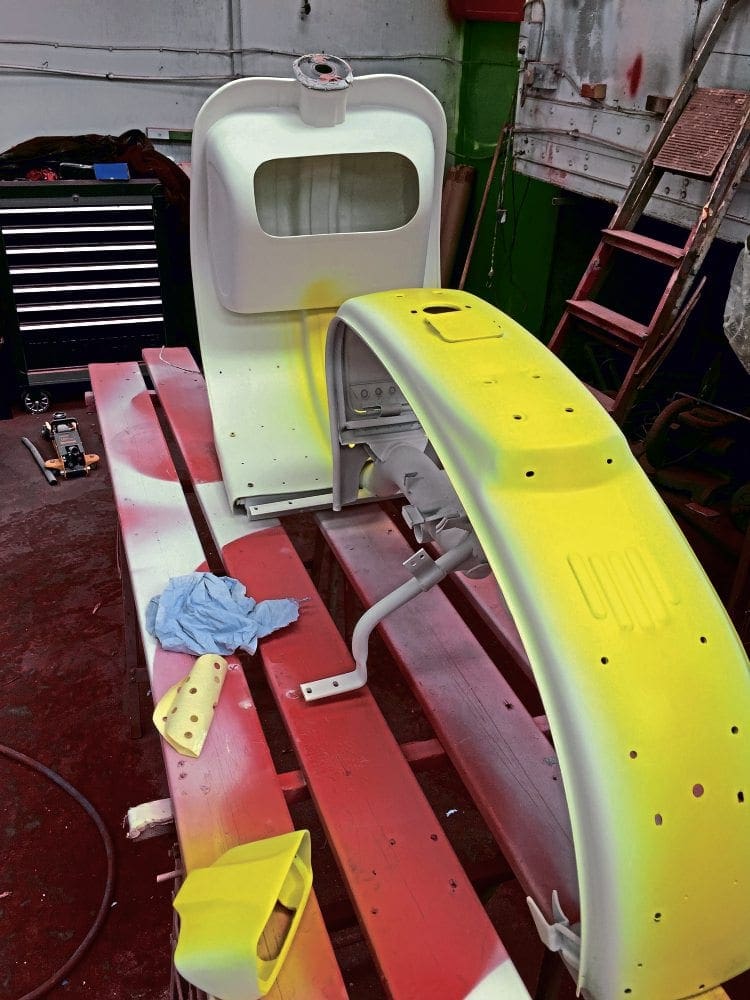 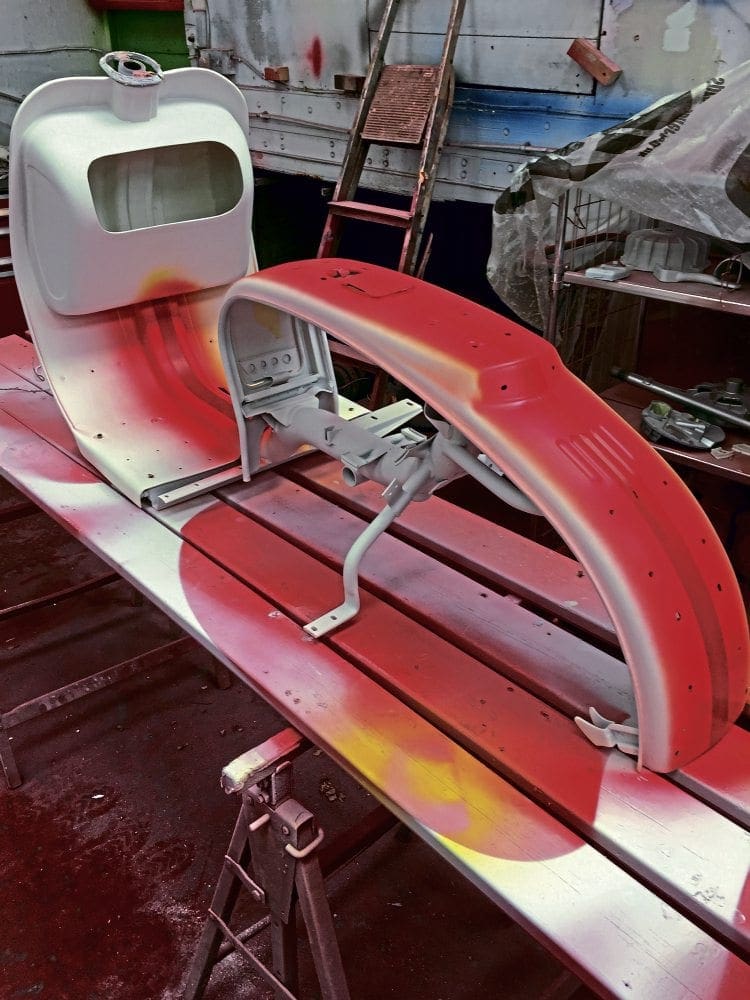 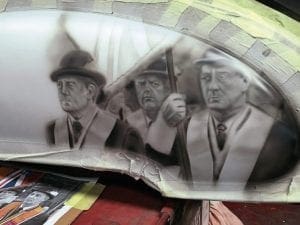 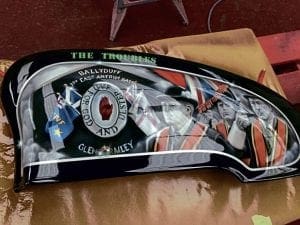