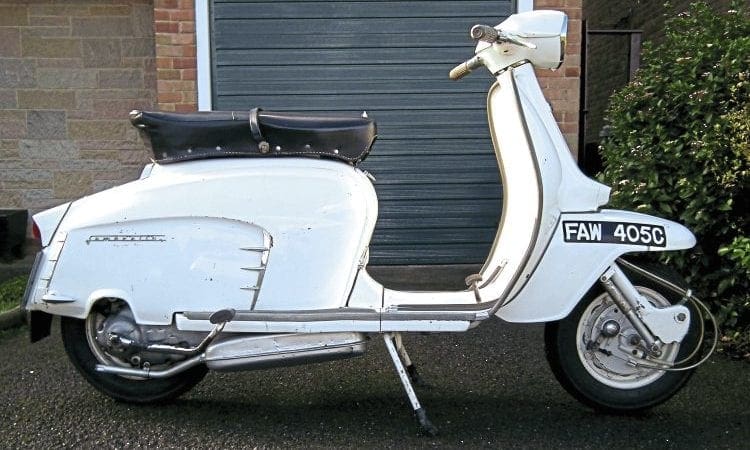 Sometimes we wish the price of scooters and spares was exactly the same as it was in the past, but were they actually any cheaper back then?

Not many people can have failed to notice the unrestored TV200 that recently fetched the staggering sum of £14,700 at auction. It’s not uncommon these days to see other examples of both the TV200 and SX200 fetch prices upwards of £10,000 in what seems a vastly over-inflated scooter market. Even the lesser models of both the Lambretta and Vespa seem to be following suit, being put up for sale with a price tag that would have been unbelievable just a few years ago. There is no doubt that the rarity of such examples plays an important part in this equation. Supply and demand have always dictated the price of anything at auction, and at the moment… there are more buyers than sellers in the premium scooter market!

Having seen what was going on it became the topic of conversation in the office, and we wondered just exactly how much prices have risen over the years. Not just scooters themselves but also the accessories, spares and just about anything else connected with them. Though some results were astounding in the amount they had increased some were not and in comparison to other items we found a few surprises along the way…

Next in the Lambretta line up is the SX200 which again fetches big sums these days. Taking an example that recently fetched £10,500 compared to the original asking price of £219 an increase of £10,281 or 4700% so nowhere near as much as the TV200 but still an eye-watering amount. However, there are other factors to remember. According to official figures, the average wage back in 1965/66 was £19 per week compared to £250 per week present day, a rise of 2700%. The current economy is benefiting from low interest rates and low inflation compared to the past where not only were interest rates higher but there were other factors such as devaluation of the pound in 1967 and crippling inflation.

So what does all this actually mean if you take £219 as the average cost of either the TV or SX200 back then compared to now? Using the historic inflation calculator that amount would be £4227 present day so the SX200 has actually gone up by around 150% and the TV200 247%, if you look at it that way it now doesn’t sound so bad. There is another way of looking at it; during the later part of the 1990s and the early 2000s, examples of both machines were fetching around £3000 so were cheap in comparison to when they came out, if using the historical inflation method of calculating the price.

Tyres have always been an essential part of the scooter – we couldn’t use one without them. Back in 1970 the general cost of a normal 350:10 tyre was £3.50. These days it’s around £30 for anything decent. That’s a rise of 757%. But using the inflation calculator, a £3.50 tyre in 1970 would be £55 today, so a tyre is actually far cheaper now than it was almost 50 years ago! What about fuel, another necessity the scooter requires to run? In 1966 a gallon of petrol was around 26p compared to today where the average is £5.20 a rise of 1900%. That may sound quite frightening but inflation wise the 1966 price of 26p per gallon works out to £4.79 present day so it is not that much different at all.

Searching for accessories that were used back in the 1960s and are still available today there were two that spring to mind. Firstly the big bore clubman exhaust that has sold in its thousands over the years. In 1967, Arthur Francis of Watford, as it was known back then, sold them for £3.12.6 which would equate now to £66.77. Compare that to £81.60 which is what they are currently sold for by AF Rayspeed. Though they are more expensive now it’s not by a great deal. In complete contrast though is the Amal MK 1 carburettor. New in 1967 they were £8.19.6 which works out at £165.30. You can currently buy the exact same specification for £115.57 – so much cheaper to buy in the present day.

Having looked at a lot of other products that were either identical or similar back then to what is available now, the figures all threw up different results. Whereas some were cheaper in the past than now like the big bore exhaust, others were more expensive in the old days like the Amal MK 1. It must be remembered that a company manufacturing scooter products in the 1960s would produce thousands compared to now where the market is much smaller, that figure being just a few hundred. That would mean back then mass production made a product cheaper to produce. Also, it was a highly competitive market with possibly several dealers in just one town, making competition more intense – another factor driving the price of a product down.

No one can doubt just how good the TS1200 cylinder kit was when it was first introduced just over 30 years ago now. The 225cc version first went on sale for £265 and is now available for £433.50. Using the calculator that means an increase of 63% but adjusted for inflation the original cost would surprisingly work out at £740. Why, you may ask. Well, the original batch of kits would have had big tooling costs factored into their price. Also, manufacturing methods are much more developed and cost effective now than they were back in 1987, so the manufacturing cost if far lower. It’s still down to the company that sells them to pass these reductions on and it just goes to show how fair AF Rayspeed has been to its customers over the years by passing them on. The TS1 appears to be better value now than it ever has been!

Comparisons to other products

Compared to other items or commodities, prices have increased far less dramatically within the scooter industry than elsewhere. A pack of 20 cigarettes for instance, which were around 12p in 1966 and a pint a beer at the same time 10p, have increased far more than anyone ever thought they would. Even adjusted for inflation, both would only work out at around £1.80 in the present day. I don’t think we need to go any further and compare to what price they actually are now to realise how much they have gone up. You could say that the pack of cigarettes has gone up by an unbelievable 8400% which makes the Lambretta TV200 look fairly affordable in comparison. Just in case anyone is still worried that the price of the TV200 is extremely high you could compare it to a Ferrari 250 GTO which was available to buy new at the same but has risen in some instances by almost 300,000%. So perhaps things are not as bad as they seem after all.

Just to annoy us a little bit

So we may moan from time to time that scooters and the products for them are very costly. If you look at the Vespa which has been available for a period of more than 70 years, the latest Vespa GTS is well in line with any other model that was new during a certain date in the past. Looking at it that way then, everything seems that bit more logical and any price comparison of any make of scooter or related product from any specific period of time compared to now seems fair.

The problem lies in the second-hand market and though the high prices paid currently may seem excessive, sometimes it has worked the other way. There were periods in the 1970s where the Lambretta, whatever model, was almost worthless. How many times have we heard of people buying one for just a few pounds? This even applies to older Vespa models, with the new ones at the time seemingly given away for less than a week’s wage. No one was moaning back then – far from it – many were picking up a bargain; getting a scooter for a fraction of its original cost.

That scenario can be quickly flipped on its head though where someone has picked up a cheap scooter and sold it for a profit a few years later for a couple of hundred pounds. If, instead of selling, they had held on to it for a much longer duration then possibly thousands of pounds of profit could have been made. I’m sure than many of us have been in that position at one time or another and as the say goes ‘hindsight is a wonderful thing’. Regardless of how much vintage scooters fetch, the market will always balance itself out, the same can be said of rare accessories. Something is only worth what someone is willing to pay and that may be a huge amount one year, but far less a couple of years later.

That’s the risk you take with anything second-hand and should always be considered when making an offer or bid. So while today we are discussing the price of a TV200 at £14,700, next year it may be considerably lower. But on the other hand, it could be even higher. Until the time comes we’ll never know, anyone got a second-hand crystal ball they want to sell?