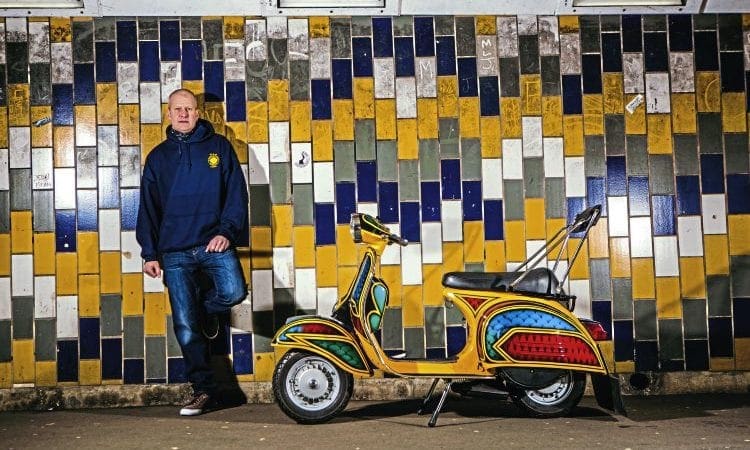 Stan meets an old friend, a genuine 1970s dealer special that’s been in the same club for almost four decades. Do scooters get any better than this? This is the reason I fell in love with scooters. By ‘this’ I don’t mean ‘Vespa’ or ‘Rally 200’, I mean HVH 80S, ‘The Joker’. I grew up in the 1970s in a village outside Leeds, a world dominated by beige Ford Cortinas and brown draylon. When ‘The Joker’ arrived in the village with its multicoloured candy paintwork it felt like a rainbow had exploded. I was smitten and for me life would never be the same. However tragedy struck. There was an accident. Its owner was fine but The Joker was no more and once again beige enveloped my world.

A few years ago I seriously considered building a replica and while researching the possibility I learned that not only had The Joker survived but it was being restored to its former glory. The rebuild took longer than planned but that time has allowed me to piece together the history of a machine that influenced most of my adult life.

Ian ‘Arnold’ Palmer is one of those hardy scooterists who were riding long before Quadrophenia made scooters ‘cool’. Pinning him down isn’t easy but for The Joker he made an exception and started by explaining what had first attracted him to scooters.

“Although scooters lost popularity down south there was still a strong following around here. Kippax SC was big back then and many of them would feature in Quadrophenia. Their scooters had lots of chrome and they wore safety boots with mirror polished steel toecaps. I thought they looked the business and wanted a piece of it.”

Arnold’s first scooter was a Lambretta, however it was far from reliable and he explained that he’d often find himself by the side of the road fiddling with its points to get a spark. “I’d see Vespas with their electronic ignition whizzing past and decided I’d get one.”

In the late 1970s there was only one place to buy a Vespa from in Yorkshire, Len’s of Shipley. In common with many dealers Len’s boosted sales by offering ‘dealer specials’. Their specialty was a distinctive style of mural, typically featuring scooter silhouettes against a multicoloured background, although more abstract patterns were also supplied.

Arnold was offered a choice of machines. “There was a line of Rally 200s, all in Len’s schemes. I saw ‘The Joker’ and knew it was the one for me. It wasn’t new, although it wasn’t that old either (from the Huddersfield registration it was probably sold new by Arnold Moores Motorcycles). They’d already applied the custom paint; naming it ‘The Joker’ wasn’t my idea. The only change I made was the road sweeper mudflap. The York SC lads all had them which they’d ‘borrowed’ from York lorry trailers. I made one with ‘CSC’ (Crusaders Scooter Club) on the back. It was a nightmare really as it caught every stone and flung them around!”

Over the next few years The Joker was used both as daily transport and to attend rallies. Period photographs show it was a hard ridden machine.

The Joker’s demise came when Arnold was almost home from a rally. “An old lady stepped out in front of me. I avoided her but she changed course and hit me. Apparently she made a habit of it and had already been run over twice before!

“I lost control, The Joker slid and sod’s law there was a car on jacks by the side of the road. It slid underneath and got wedged. I can’t remember if I sold it or the insurance company took it; it just disappeared and I only recently found out that Woody had it.” Although Arnold drifted away from scooters he’s now the proud owner of a P200E, still attends rallies and has rejoined his old club.

Lifelong Crusaders SC member Paul Wood is a self-confessed scooter hoarder. Once something enters his collection it’s rarely offered for sale, even if it takes some time to complete. The Joker is a good example as it’s been on the bench for almost 35 years! “The Joker was a scooter that always appealed to me,” he explained. “In 1982, shortly after the accident, I was told about a dealer who had a couple of Rays that were for sale, so I went to have a look at them as they were going cheap. One was The Joker so I bought it for £60.

“The paintwork wasn’t too bad but it was rotten and needed a new floor. The accident may have been the final straw but I’m sure it was rust that took it off the road.”

Woody laughs when telling the story of the scooter’s restoration and resurrection in the wake of its accident, which began a surprisingly long time ago: “My first attempt was in 1983! I booked it in for paint and went back six months later. It hadn’t moved an inch so I took it home.

“Over the years I looked for a suitable painter but something always got in the way. With the 35th anniversary of the Crusaders approaching in 2014 I thought The Joker should be ready for our celebrations. I should have aimed for the 40th instead!”

Woody’s a big fan of 70s schemes and was determined The Joker would remain true to its origins. “Without causing offence, some 70s work was quite basic. I love that period but they were mastering complex techniques using basic materials. The original panels had several ‘bleeds’ under the masking tape. I wanted to reproduce that effect, not create a sanitised version.”

Finding a painter capable of reproducing a complex scheme is hard enough, persuading them the finished result should be less than perfect is something else. Eventually Col at The Garage Artwerks agreed to take on the project. As Woody points out: “Agreeing to produce an imperfect job was brave for someone with his reputation” 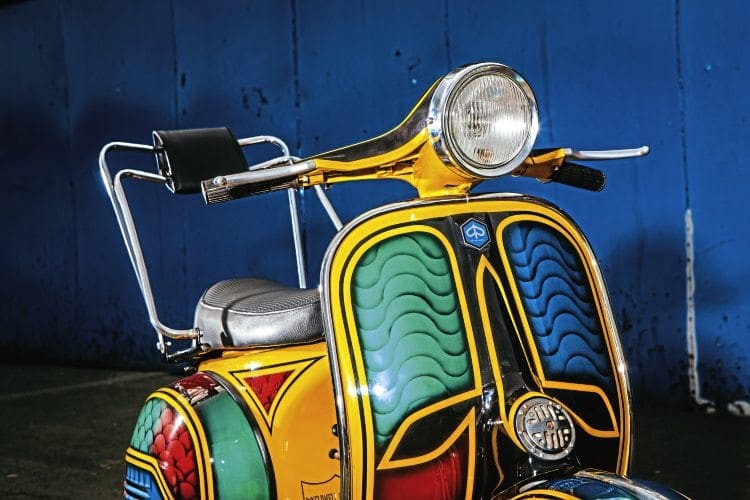 Every panel on the rebuilt scooter is original to the machine but it’s only been possible to save one piece of the original paint — ‘The Joker’ tool box door. This has been treated to a coat of lacquer but is otherwise untouched. Comparing this to the new paint shows how well Col carried out his brief.

It’s very easy to over-restore a classic and create something that would never have existed ‘in period’, but Woody’s wisely chosen to retain The Joker’s integrity. The finished result captures a moment in time, a high point in contemporary style, it’s an original reborn, not a copy. Consequently The Joker’s an important scooter, not just to those who knew it first time around but to the history of British scootering in general. 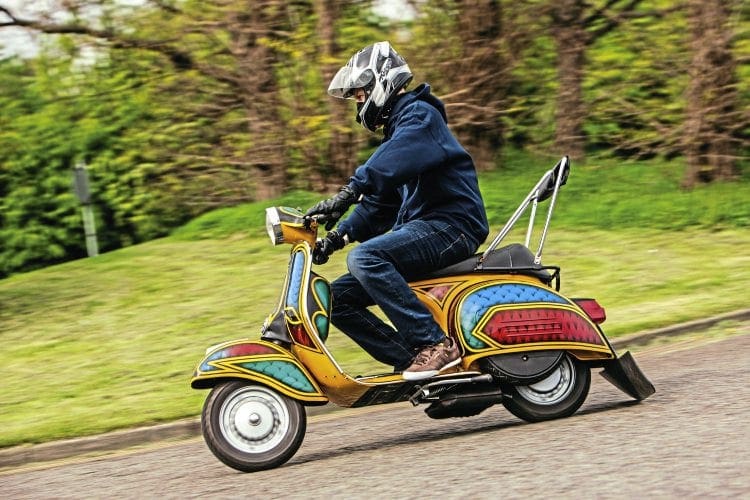 Engine: Currently a standard T5, the original unit will be finished soon, honestly.

Paint: First time around Lens of Shipley, this time Colin at The Garage Artwerks.

Biggest challenge: Not chipping it during assembly. 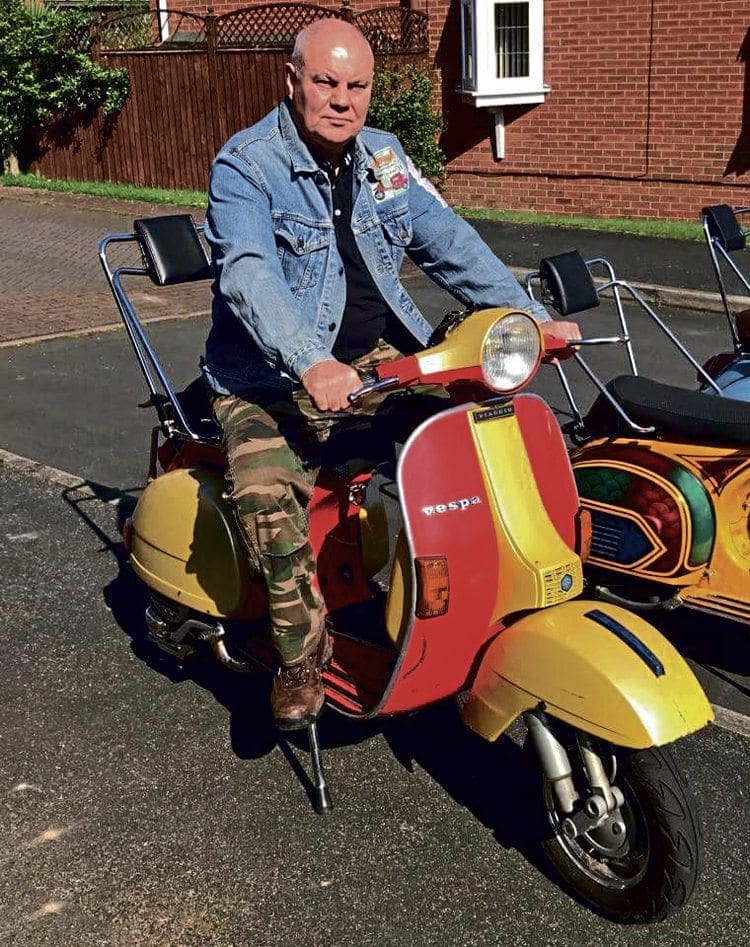 First interest in scooters: Mid-70s, it was still strong up north.

Furthest ridden: No long journeys in one go but I rode everywhere on The Joker — work, rallies you name it. 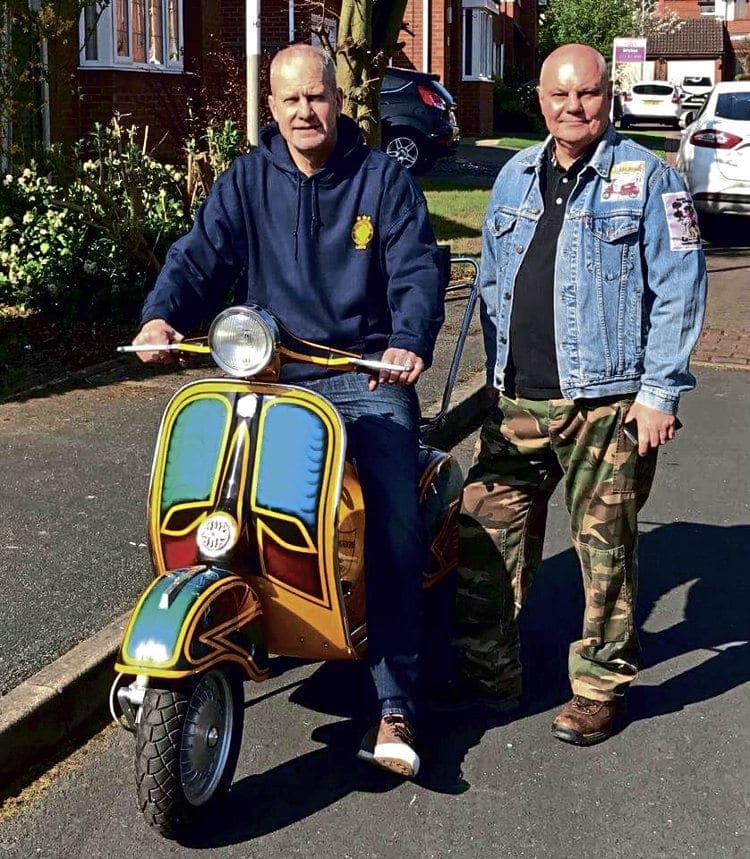 First interest in scooters: Around 1979 through seeing scooters being ridden.

First scooter: SX150 — pulled out of a back garden. I’ve still got it!

Favourite dealer: Buzzsolomoto in Halifax and John at Wakefield Scooters.

Established in 1978 Rothwell Crusaders (CSC) is one of the longest running clubs in Yorkshire. Formed as the result of an amicable separation from larger clubs, Arnold and The Joker were among the founder members. Throughout the 1980s it boasted a core of determined riders and there was barely a local or national rally the club didn’t attend. The 1990s saw membership decline but CSC now boasts around 20 active riders, many of whom also rode in the club’s heyday. Once again CSC is represented at most northern rallies with the odd foray to the Isle of Wight and Woolacombe. 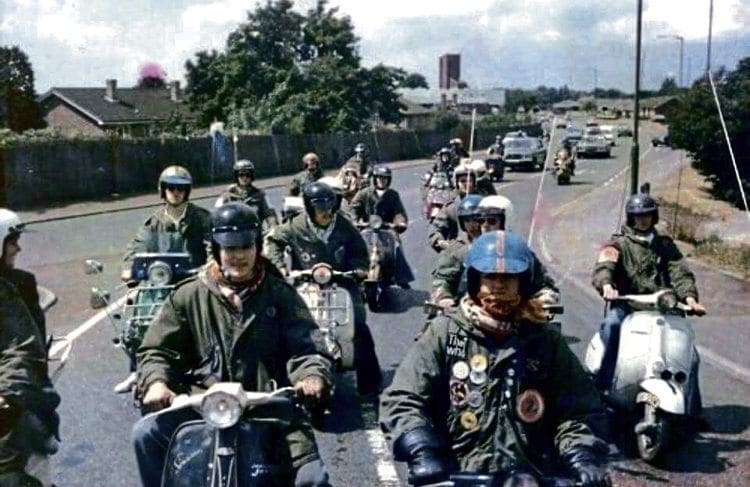