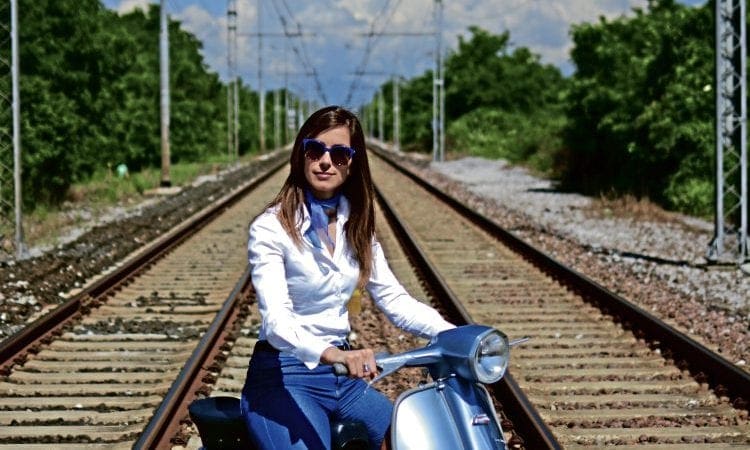 The Italian streets of Modena, a purse riding thief riding a stolen TV175 and a determined Italian Cop on his 500cc Moto Guzzi… 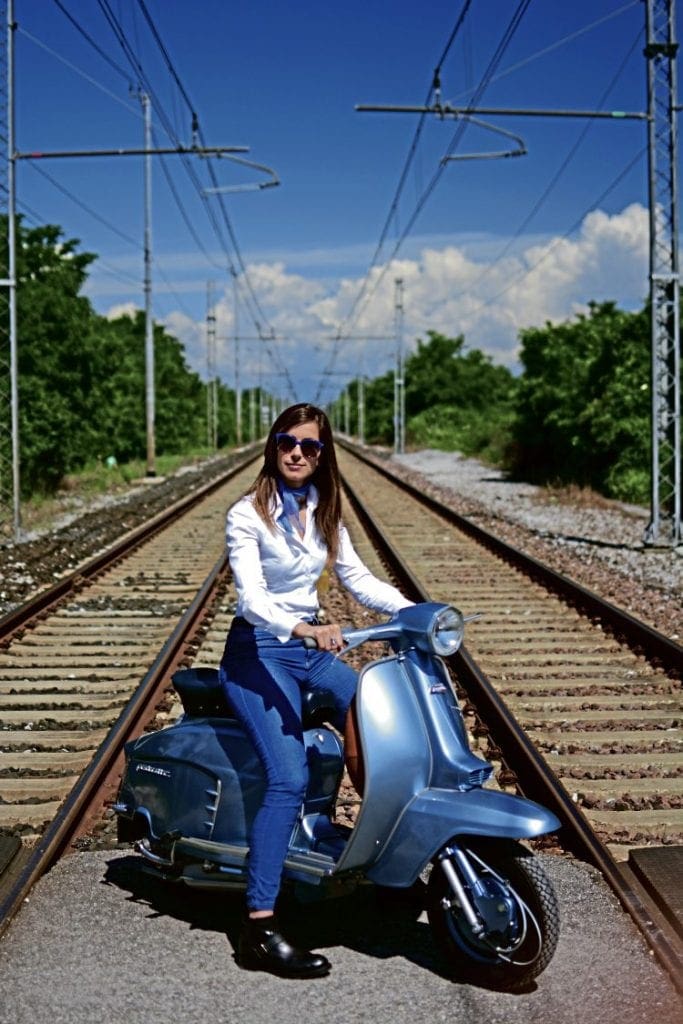 For late July it is a strangely cold day in Modena, Emilia-Romagna, Italy. It’s one of those days when the sky is dark grey and the rivers are painted across the land in cool black. I am in this city to learn Giovanni’s secret. This former motorcycle police officer contacted me by phone to tell me, in confidence, that the truth must finally to be told. A Romanesque-style city, Modena is home to some of the world’s most important and beautiful historic books, such as the hand-decorated 15th century Borso d’Este bible. At the city’s library of ancient manuscripts, the Biblioteca Estense, this and other works are studied in silence by academics and researchers wearing white cotton gloves — in stark contrast to the flip side of Modena: its passion for screaming race motors!

At the end of the Second World War, mechanical industries came to overshadow the city’s traditional artisans and their quaint regional crafts, heralding a new era focused on steel manufacture and industry. During this period the companies now most strongly associated with the Modena region — such as Ferrari and Maserati – established themselves and unleashed the fervour of the crowd and citizens who, it seemed, had been waiting all along to be sucked into a roaring vortex of rumbling, snarling engines bred only for speed and power. During an interview, Enzo Ferrari said to RAI (Radio Televisione Italiana) journalist Guido Piovene: “Race cars are people. Every car has a soul and to build them is just like getting high on cocaine.” 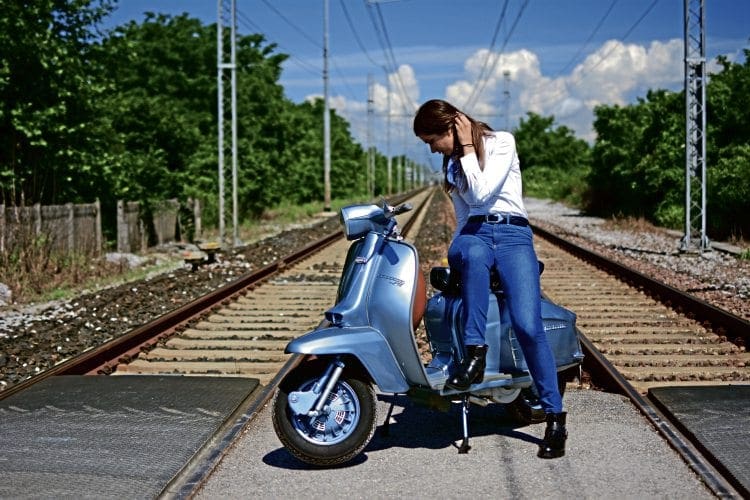 In this era another legendary son of Modena, Vittorio Stanguellini, became known as the ‘modifier’. He would take standard, everyday Fiats and turn them in nasty, brutal racing cars. Stanguellini tuned-up, among others, a Moto Guzzi motorcycle engine and the created ‘Colibri’ (hummingbird) — a 248cc aluminium single-seater streamliner.

Modena and the colourful characters of her illustrious past provide the backdrop for Giovanni’s experience. He rode motorcycles for the police from the 1950s to the 1980s and now he is grandfather to Elisa, who shares his love of two-wheeled machinery. I meet him while he is smoking a cigar just after the lunch. I am so curious after all his enigmatic statements over the phone that I immediately start to break the ice, firing questions at him. But being a good ex-cop he stops me straight away and makes sure, before he begins to elaborate, that I will write down word for word what he is going to share with me. 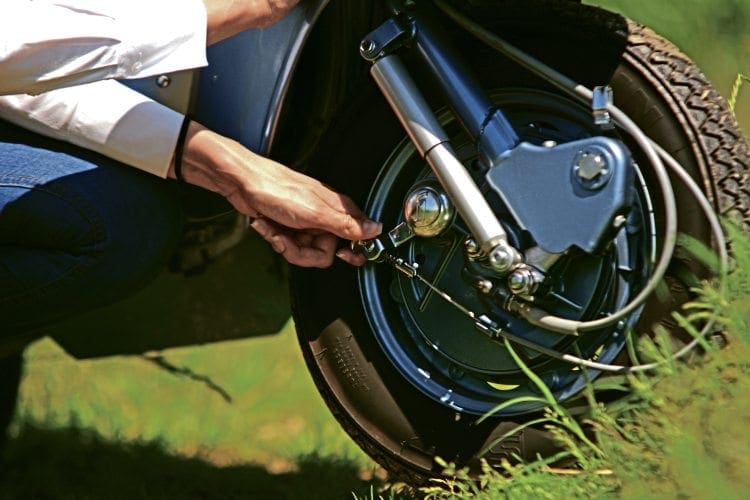 Growing up amid the wealth and prosperity of late-1950s Italy was living the dream. Giovanni was a young police officer on his Moto Guzzi Falcone 500cc — on the lookout for trouble. He told me: “My task consisted of first-response and traffic control. We handled any suspicious activity from pickpockets to major car accidents. Often we saw some young hot-heads racing above the speed limit or risking themselves by driving dangerously, so when it happened we (usually working in pairs) switched on the siren and chased the bad guys.”

Giovanni pauses while fixing his shirt-collar, just like he would have if he’d still been on duty. “Modena is not Los Angeles or San Francisco. Pursuits weren’t how they look in the movies — most operations were over in about 10 minutes at most. We would call other forces in from the opposite direction of the road. The Falcone was pretty fast in a straight line. Normally it was a piece of cake.” It was the period of Fellini’s La Dolce Vita film and although there was general prosperity, the thieves were growing up fast. “It was all good and our shifts went relatively smoothly,” says Giovanni, “all good, this is, until that one day…”

“The criminal, on a blue Lambretta devoid of regular traffic/licence plate, extorted and robbed two purses and one gold jewellery item from the victim, here identified as ‘A C’.”

Giovanni fixes his shirt-collar again and clears his throat, saying: “This activity alerted us to the presence of a gang who, over the following weeks, were responsible for a substantial amount of wrongdoing. So we started to keep our eyes open during patrols, watching for any evidence of suspicious movements. We found later on that the blue Lambretta was stolen from a rich family out in the countryside near Modena.” 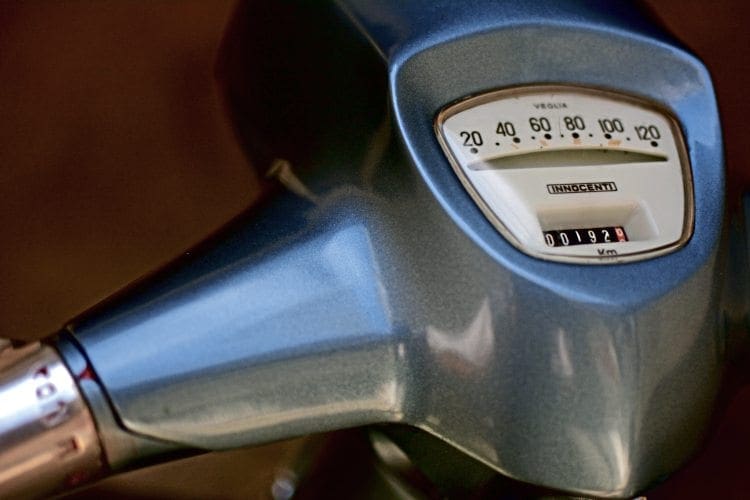 I am invited into Giovanni’s studio, inside the house. A wooden staircase brings us to the first floor and a door on the right leads to a square room where heavy volumes rest on big bookcases. On the floor, a Persian carpet makes the guest’sfootsteps very soft. It is just like the famous 221b flat in Baker Street, London. I can’t help myself; I smile as my mind conjures up an image of Mrs Hudson stepping in with a tray of black tea and biscuits.

“We tried to find that bloody Lambretta in every possible nook and cranny of the city, even in the provinces nearby. Nothing!” Giovanni pauses and brings me abruptly back to reality. “Then on July 27, more than two months after that first incident, I saw a bag-snatching with my own eyes, just 100m away from me. I was in front of the railway station in Via Pico della Mirandola when I saw a light blue Lambretta pop out of a secondary road. That bloody wretch was so fast on the corner that his knee was almost touching the pavement. Three seconds later two purses were gone already. 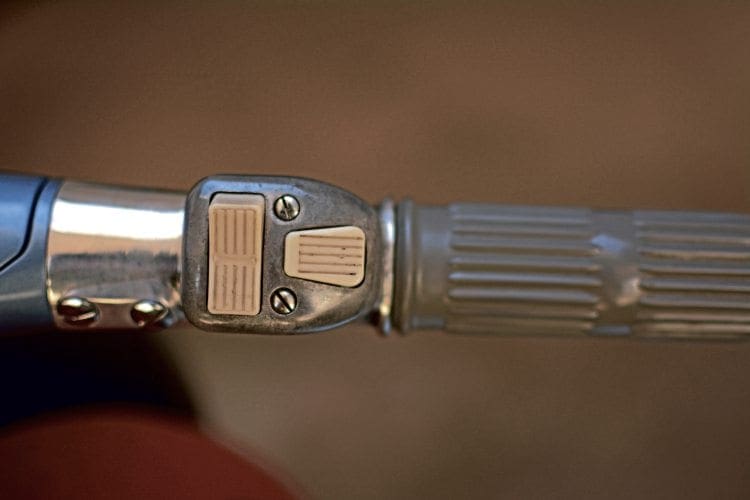 “One of the ladies was even dragged for a few metres, wounding her arm very badly. My colleague was too far away, ticketing someone for a stop penalty. I didn’t have time to waste. I started the Falcone 500cc engine with a very strong kick and I took off in pursuit. My Moto Guzzi had been off for more than an hour though and the engine was cold. We were on traffic control duty, and it was a quiet day, so when I gave it full gas it crackled a bit, choked itself and stalled! I started it again with a ferocious kick but losing all those metres to the fleeing Lambretta was bad. By now it was over 600m away and far ahead of me. I triggered the Guzzi’s horses that had the universal-joint-transmission and every gear-shift at maximum power was just like a mule-kick in the back. 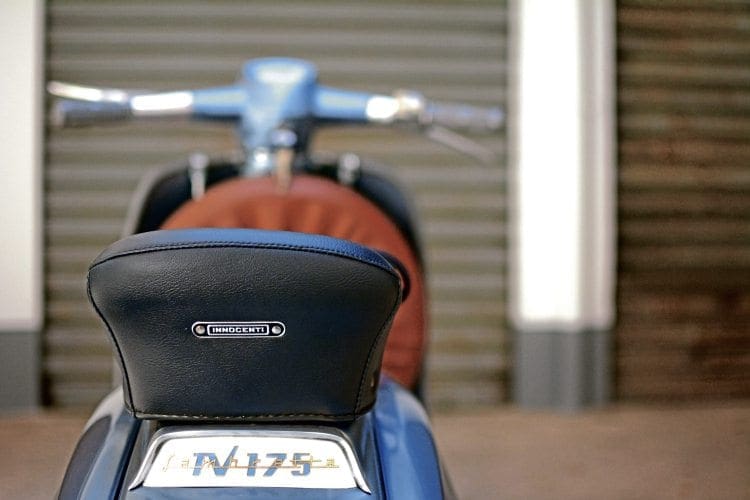 “I was confident though that my bigger displacement and the siren would help a lot. What could a Lambretta do against the police Guzzi? Via Manfredo Fanti, Via Nonantola, all straight and with sirens at full volume — yet I couldn’t catch that bloody light blue small spot ahead. The criminal was damn fast at changing direction as he squeezed between the cars. He entered Viale Albereto, a strip which was strangely empty and we were one against the other on an open road. I couldn’t believe to my eyes: 80, 90, 130, 150+ kph! Impossible. Between Villavara and Navicello I lost eye contact because after a slight turn he pushed his machine down a cut-through. Gone.”

Giovanni stops speaking and gazes out of the window for a moment before continuing.

“Back at the central police station I wrote up a full report on the stolen Lambretta. After some deeper research, it came to light that there weren’t many scooters like that around. It was a 175 III series, equipped with disc front brake, clearly very well-tuned to stand up against a police Moto Guzzi! On the other hand, I was able to now add more detail about the thief who passed pretty close to me just before the snatch went off: 1.80m tall, moustache, long brown hair and slightly neck-bulged.” The ex-cop reaches up and takes down a folder that contains a Moto Guzzi Falcone service manual, a Lambretta TV175 III series service manual, and black and white location shots. 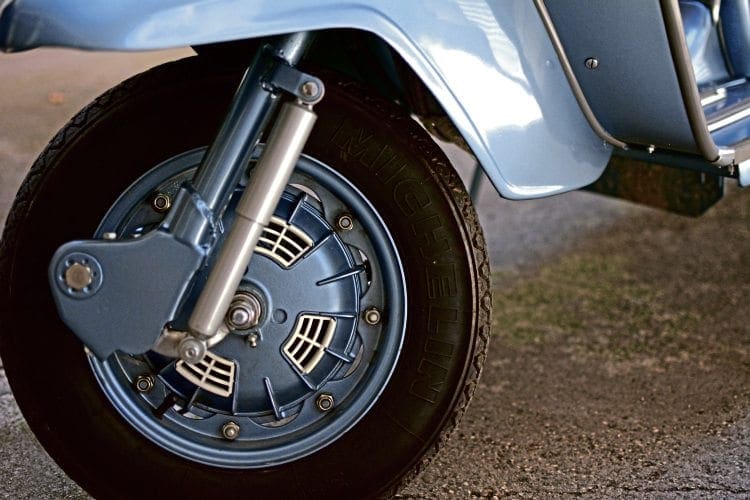 “My career on the road was not adventurous; I never used my gun except at the shooting range, the bag-snatcher was the only full-throttle experience I ever had as a motorbike policeman.” A smile appears to go with this sentence. “Thanks to this relative serenity I have been able to raise three kids”. He pulls out a colour photograph from his pocket: a blue-eyed brunette with spaghetti-like straight hair. “Elisa is the youngest in this family, she is passionate about motorbikes and scooters just like me and a glimpse of her is still able to stupefy me like a 16-year-old boy in front of his first love.” I ask Giovanni about the truth he mentioned at the phone. Did he discover the thief’s name? Did he find the whole gang? What truth?

We go downstairs and in the garage, half covered by a black canvas I see a distinctive front hub, four white air-cool deflectors, chrome front brake regulators and a mechanical disc-brake. The evidence is unequivocal: a 175 III series! I look at Giovanni amazed and I ask: Is that THE Lambretta? He pauses dramatically, then replies: “There were four more major robbery alerts in our department, all with the same modus operandi: Lambretta, fast speed and wounded people. Finally, at the end of 1966, my police colleagues found the bad guys’ den. 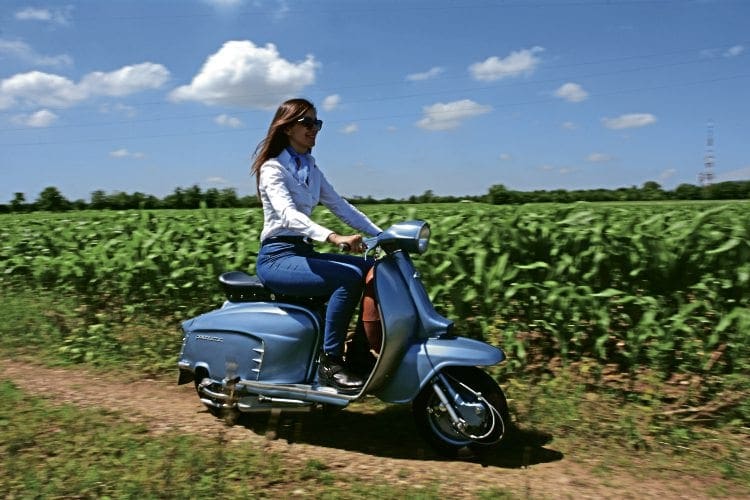 It turned out the gang had operated for years in the Modena-Bologna areas. After the arrests were made, all the gear and booty was seized, and a heavily tuned-up Lambretta and motorbikes were discovered — all of them had been used during raids. After that I didn’t know what happened to the thieves’ scooters and after a while I paid no more attention to this story. Years passed and at the end of 1990 I retired from the police department.

“One day though, Elisa and I passed by a second-hand scooter shop and we saw a dented, scratched, vomit green Lambretta on sale. Actually I didn’t like it at all but Elisa wanted to know more about that scooter. We cross-checked the chassis number just to be on the safe side.” The black canvas slides along the scooter’s tapered form, showing off shiny chrome and impeccable bodywork. Giovanni opens a four-times-folded paper wad gives it to me. There are two sheets — one is a robbery charge sheet, and the other is the chassis number cross-check. I scan the data and I can’t believe to my eyes — they match. A proud smile appears on the ex-police rider’s features. “It was THE Lambretta. Finally, I nabbed that bloody Lambretta! Sometimes you have only to wait.” 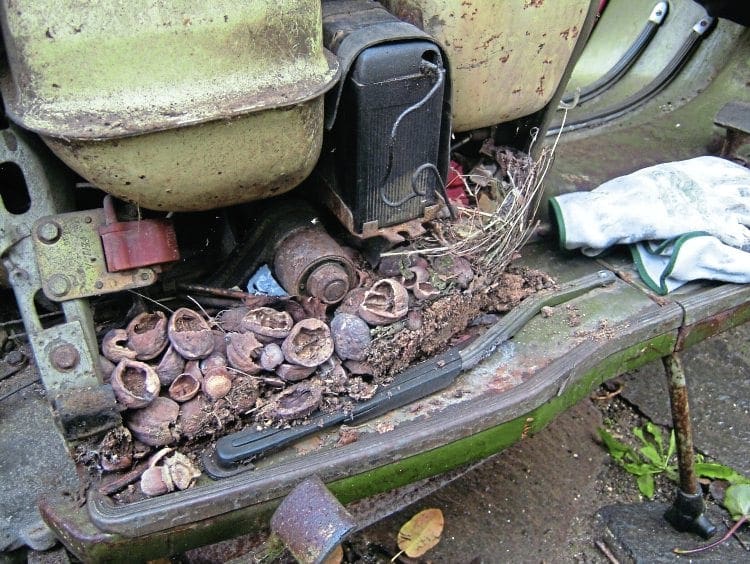 Elisa helped during the 175’s restoration and is the only family member permitted to use it. Her kind ways, the clothes she chooses — they complement the Lambretta’s colours — and her very neat hands provide a counterpoint to the “175 turismo veloce” nature, just like the Borso d’Este bible to the roar of a Ferrari. The circle closes. 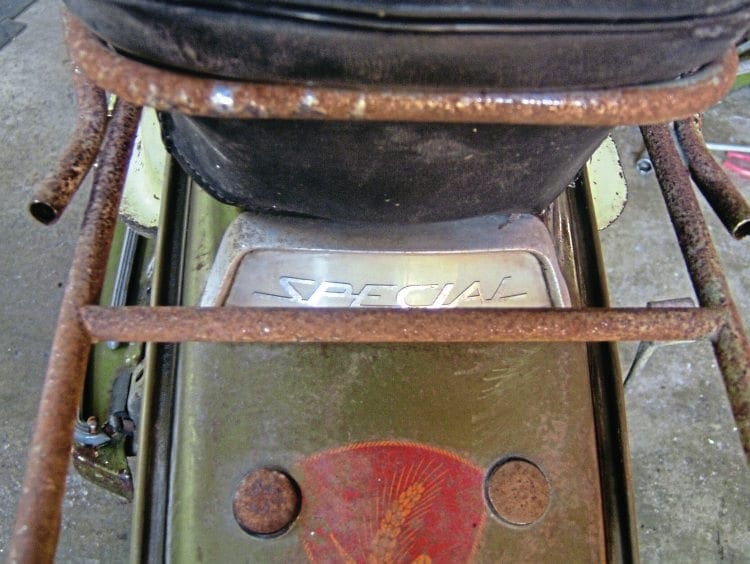 Elisa and I head out towards the countryside for a couple of photos. Giovanni stands up on his Sherlock Holmes terrace. “Mind the street code Elisa! That scooter has had enough wrongdoing. It is time to toe the line!” 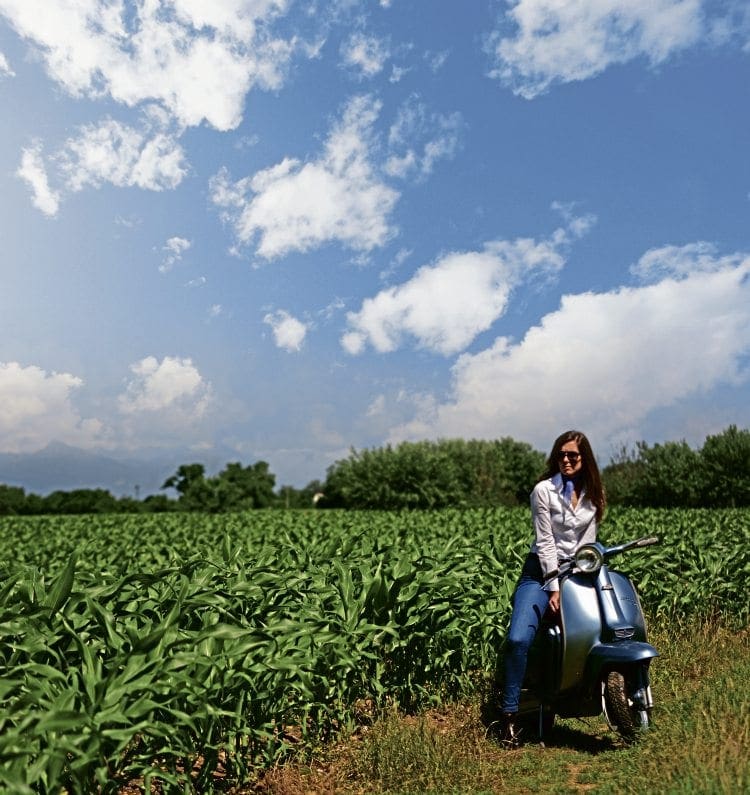