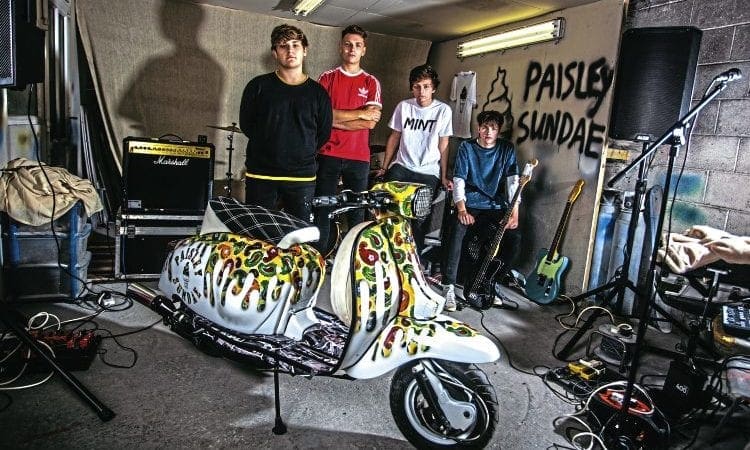 There’s no shortage of ‘band tribute’ scooters out there but it takes confidence to create a custom celebrating a group that haven’t yet signed a record deal.

Over the years we’ve featured a few of Simon Cuerden’s scooters ranging from his sublime S Type to his quite bonkers chopper. As he’s an active participant in the Northern Soul scene it would be logical to expect that any music themed custom would be a nod in that direction but Simon’s not a man bound by convention.

“When I left the Army I ended up living between Barnsley and Sheffield where I met Richard Galloway who earns his living as a spray painter,” explained Simon. “We struck up a good friendship and over the years he’s painted a few scooters for me. His son, Owen, is a really talented drummer and it’s been fantastic watching his musical style mature. His latest project is Paisley Sundae, a group of young musicians who honestly don’t know just how good they are. Although they perform covers it’s their own material that completely dazzles anyone who sees and hears them.”

Most scooters have stories to tell and Simon’s Innocenti GP200 is no exception. “I left school in 1979 and became a ‘YOPper’, working on the Youth Opportunity Scheme delivering sand and cement for a building supplier in Withernsea,” said Simon. “One delivery was to an old chap with an artificial leg. He asked me to stack his cement bags in the shed, right next to an Italian GP 200. I asked about it and he told me that he’d bought it brand new but could no longer ride it due to his leg. I pointed out it was just sitting there covered in dust and cheekily offered him £25. Incredibly he accepted the offer! That was 39 years ago and that scooter and I have never parted company.

“Over the years she’s been abused and misused, loved and cherished, ridden and hidden, showed and raced. Together we’ve shared experiences of a Honda 205 conversion, a Suzuki 225 Stage 6 and even a full blown race engine.”

For the past couple of decades an engine, centred on a TS1 kit originally used on Mike Davis’ race scooter, has propelled Simon around the country. “In its day this was a fairly trick scooter,” said Simon. “The carb is a 36mm Dellorto with a six-petal Yamaha reed block. I’m a big fan of MB Developments and it was Mark Broadhurst who fitted and tuned the engine. It’s a Lambretta so reliability comes and goes but as the engine delivers all the power I want I’ve never needed to mess with it.”

While Simon was happy with his GP’s performance, he had to accept that it was in need of a cosmetic refresh. “I’d been thinking of respraying my GP for a while,” Simon explained, “after a boozy night watching the band, I told Richard he could use it to promote them. It was a drunken throwaway comment for me but within the week we had her stripped and rubbed down. I helped with the preparation work but the project was a labour of love for Richard.”

“Someone would have to pay me a lot of money to repeat a paisley scheme,” laughed Richard, owner of EOM Racepaints. “Every one of the paisley motifs has been applied by hand,” he explained. “I thought it would be fairly straightforward with a repeating pattern but paisley doesn’t work like that, I told Simon to take it away a few times but I’m glad we persevered.” Having first applied a white base coat, Rick then outlined the individual paisley motifs. Over this he then applied a thin coat of ochre. “Rick told me it was ochre but the last time I saw anything that colour I was changing my son’s nappy,” laughed Simon, adding: “I thought he’d lost the plot at that point but he was absolutely spot on with the contrasting colour.” Next came the lengthy process of colouring in the motifs by hand and finally the melted ice cream effect. “I’m really pleased with the logos,” said Rick. “When I applied the Paisley pattern I didn’t think that far forward but the ice cream swirl effect couldn’t have turned out any better”.

On the day of our photoshoot Paisley Sundae performed a short set, it’s easy to see why Simon has faith in their potential. Rally organisers would be well advised to get in touch. The band’s energy, combined with Simon’s GP are guaranteed to please any scooterist audience.

A QUICK ONE WITH OWEN GALLOWAY, PAISLEY SUNDAE

Where are they based?
Barnsley, Yorkshire.

Simon Cuerden has had a GP Lambretta custom painted with the theme Paisley Sundae. Their first gig was for Barnsley Vikings SC.

How long have Paisley Sundae been together?
The band started in September 2015, the current line-up has been together since April this year. We’re all friends from school, have known each other from then and from studying music. We hang out together in the time honoured tradition of us against the world, the last gang in town outlook. Our first gig was for Barnsley Vikings; we’ve had a scooterist following right from the start. We’re not a Mod band, though our music has what some may say is a 21st century Mod appeal.

Who are your influences?
Contemporary indie music, Arctic Monkeys, The Libertines, Stone Roses, a bit of The Beatles and Catfish and The Bottlemen. We write our own songs, though if we do throw an occasional cover in a live set it’s usually from one of the bands that have influenced us.

Who writes Paisley Sundae’s songs?
It’s a collective effort. The music comes first as a few ideas, then it grows organically from there. Once the music is a finished tune, then Mason adds lyrics. We’ve had a self-released single, Had Someone, and there’s also a demo version of Magic. Both are available for people to listen to online.

What have been the highlights for Paisley Sundae so far?
The first gig for the Vikings was a real buzz, playing at Northallerton Festival was a fun experience, winning the regional heat for a Greene King-sponsored battle of the bands, and then making it through to the final of the competition, playing on the same bill as Razorlight at the O2 Indigo in London.

What’s the best way to keep up to date with Paisley Sundae?
Our Facebook page www.facebook.com/paisleysundae has links to our single and demo, live footage and up to date information on when and where we’re next playing. There’s contact details should anyone want to book us on there too.