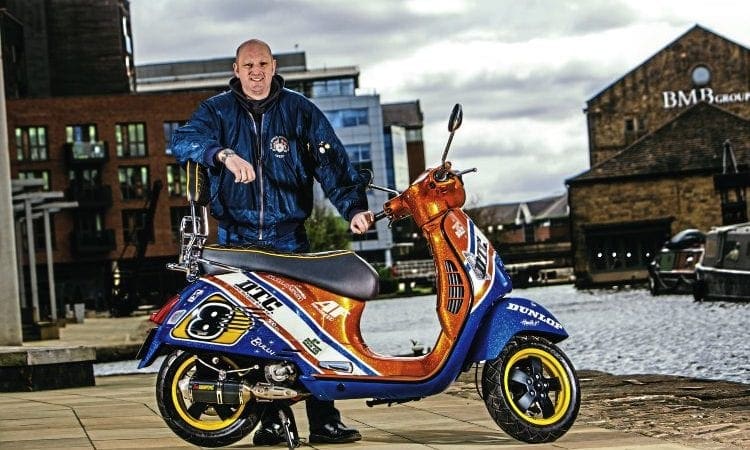 A short while back we featured a GTS, copy DTC. “Never!” purists cried. Eat your words – here’s the one and only ‘official’ Maca GTS.

The times they are a changin’…

Love them or hate them there’s no denying the popularity of autos among rally going scooterists. Those who’ve caught the bug enthuse about their effortless mile munching qualities while doubters dismiss them as boring and it’s fair to say that the number of quality custom builds can probably be counted on the fingers of one hand. The Rosa Bianca scheme is one of the most iconic ever applied to a scooter and Maca’s decision to apply it to a GTS may just be the watershed auto lovers have been waiting for. 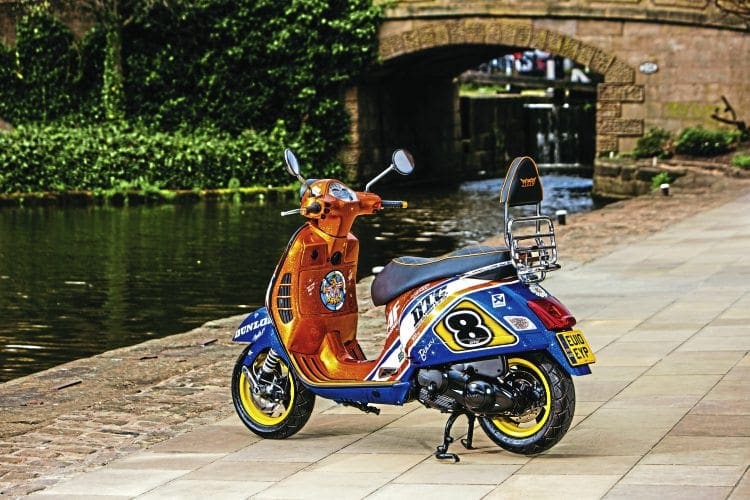 A little bit of Bully

Nicknames are a funny thing and some people go through life being called exactly what’s written on their birth certificate. For Craig Gibson all it took was one appearance by his dad on a 1980s game show and he’s been ‘Bully’ ever since (Younger readers are allowed to Google ‘Bullseye’ at this point!). While that explains some of the artwork, why customise a GTS? “I wanted something different,” said Craig “I’ve had scooters for most of my life, Vespas, Lambrettas and another GTS. They all have strengths and weaknesses but it’s very difficult to think of something new on a geared custom; autos are a blank canvas.”

The base machine was an insurance write off GTS with front end damage purchased for £950 in the knowledge that at the same time a friend was offering a 125 frame for £50. Craig is no stranger to building scooters, in fact there’s very little he can’t turn his hand to. From welding to spraying via electronics he’s mastered them all, When I confess that the GTS scares me (it’s the first scooter in decades I don’t understand the inner workings of) Craig is quick to reassure me.

“It’s still a scooter. Just take your time, photograph everything and make notes. If it comes apart then it’ll go back together. The difficult part is the wiring loom as it looks like some sort of alien technology!” Although transplanting a 300 engine into a 125 frame may seem like a relatively straightforward task there are some subtle, but important differences. Not least of these are the cooling vents which had to be cut from the donor 300 and then seamlessly welded into the 125 frame. 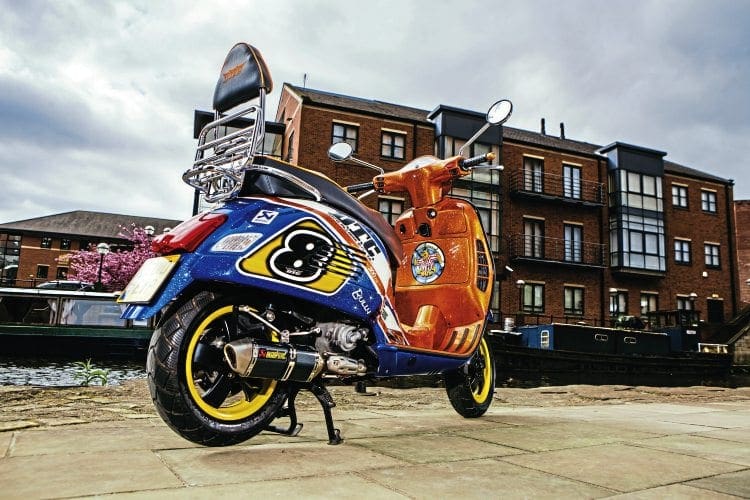 Such are Craig’s skills that when Maca gets busy it’s former racing partner Craig he calls upon to offer a little assistance around the workshop. With several favours in the bank there was only one person in mind to apply the paint and having dreamed of owning his own Rosa Bianca for decades only one scheme was on the table. “It’s the first, last and only GTS I’ll spray,” laughs Maca “There’s nothing wrong with the GTS but spraying them is a very different process to a Lambretta or Vespa.”

Although Maca isn’t a production line painter, his familiarity with certain machines means that spraying them becomes second nature. Even when stripped to bare components the GTS is large and more than one local scooterist has been called upon to help move Craig’s machine around the spray booth. Maca explained that having overcome most hurdles it was during the final stages that the project almost came to an end. “I’d just applied one of the final coats of lacquer and was leaving the booth but because it’s a much larger frame than I’m used to I didn’t realise how far back I was and reversed into a fluorescent tube. The light shattered sending shards of glass and powder everywhere, including the wet GTS. I rang Craig and told him to take it away.” Fortunately sanity prevailed and after a lot of remedial work the GTS emerged ready for rebuild. 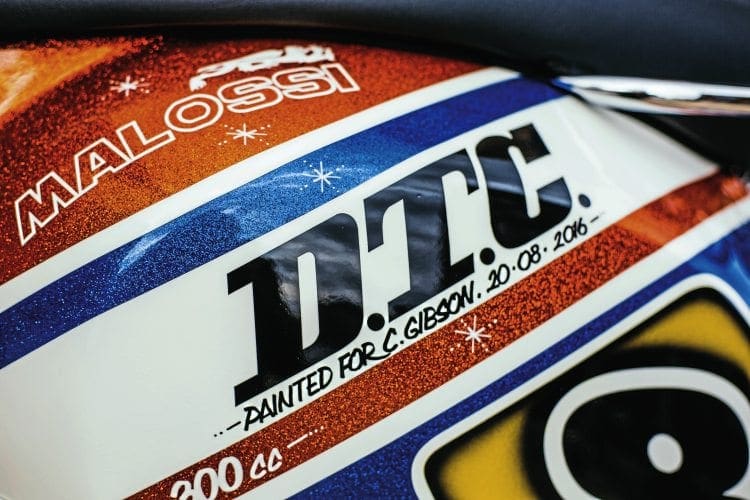 Keep out of the black and into the red

There’s no point whatsoever in creating a Rosa Bianca street racer that hasn’t got something extra under the panels and the engine is all Craig’s handiwork. Four-stroke scooter tuning is something of a dark art and for the most part Craig’s wisely restricted himself to bolt on kits. Whenever I talk to someone who understands this new discipline I never fail to learn something new. Having been brought up on classic two-strokes there’s a whole new language to learn and I’m always wary of being taken in. For the most part I feel like the apprentice waiting outside stores wondering why it’s taking so long to fetch the ‘Long Stand’ needed in back in the workshop.

When Craig tells me that his GTS’s main punch comes from Malossi’s 282 conversion I’m on solid ground as I’ve recently grasped the concept of a variator, but an emulator? I nod wisely and hit Google once I get home. 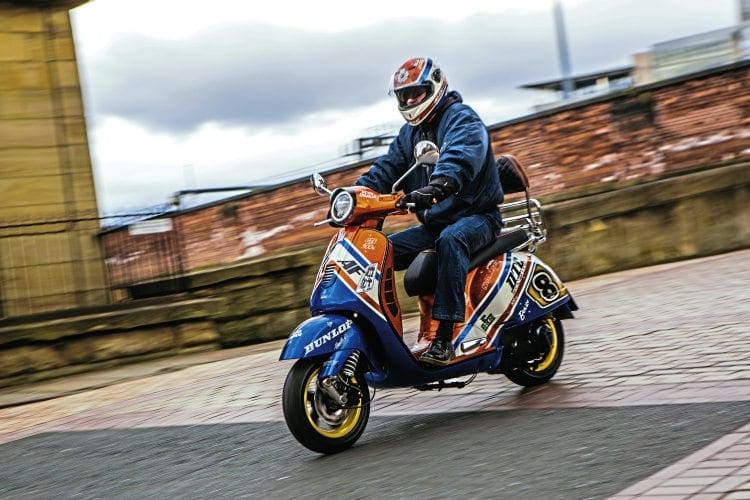 For the uninitiated, a modern four-stroke engine is largely computer controlled. Fresh from the factory it’s programmed to allow safe use of the engine. Performance kits make extra demands for fuel and air but ‘the computer says no’ which effectively restricts the kit’s effectiveness. Changing the fuel controller can help, but Piaggio are one step ahead and as an extra safety measure the GTS computer recognises any alien interference and logs it as a fault. Once Malossi’s emulator is plugged between the lambda sensor and its regulator unit it mimics Piaggio’s original signals enabling delivery of the correct fuel and air mixture without sending error messages to the COI. Without it, as Craig explains, “I use a hell of lot more fuel!”

One exception to the bolt on performance ethos is the exhaust. This was bought as a self-assembly kit from the internet and required Craig to dry build before welding it together himself. Incredibly the Akrapovic silencer bracket was also manufactured from scratch, Craig having studied photographs on the internet and interpreted them in his own way. 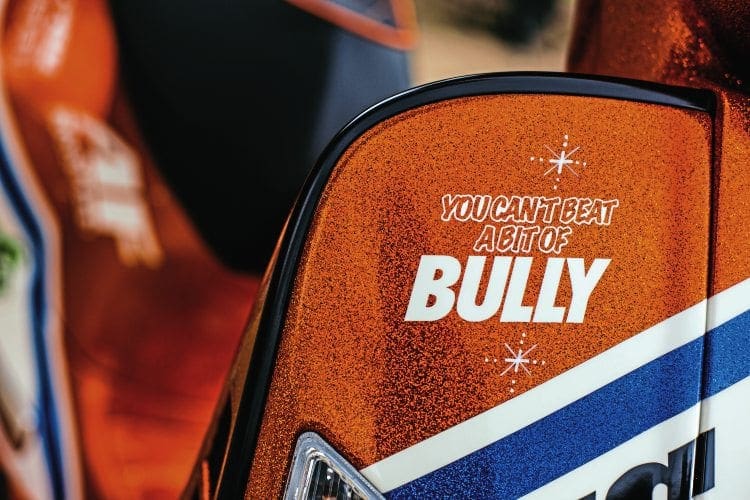 A common criticism of high end customs is that they’re engineered using a cheque book. Admittedly Craig is blessed with skills that most of us can only dream of but there’s no doubt that his GTS is truly a self-built masterpiece.

Look at what you could have won

The successful transfer of his Rosa Bianca scheme illustrates just how talented Maca is as a designer. Although there have been some adjustments to suit the GTS’s curves it’s instantly recognisable as Maca’s work. His choice of burnt orange is inspired, bringing the classic scheme up to date for a new generation of scooters. There’s no doubt that imitations will follow, but Maca’s adamant this will be the only GTS to bear his signature.

A wise old scooterist recently said to me “It’s only when good custom built autos start to come along that we’ll know for certain they’re finally embedded in the scene.” With the GTS now worthy of Maca’s attention perhaps that day has already come.