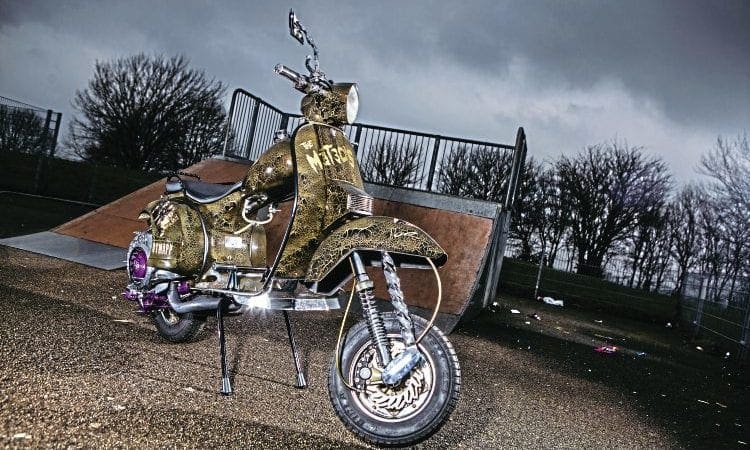 In 1983 Paul became interested in scooters and his first one was a Lambretta Li150 Silver Special given to him by his next-door neighbour. At the time Paul was into the psychobilly scene and it was also around that time that the scooter scene was shifting from the Mod revival look with mirrors and an abundance of chrome accessories to the more fashionable looks of the period — chops and cut-downs.

By day Paul works as an alarm fitter but at weekends he’s a roadie with the band The Meteors. “I’ve been into The Meteors from the beginning and I’ve been going to their gigs for ages. I was introduced to the band about nine years ago and became friends with them. Then; about six years ago I was personally asked by the band if I was interested in joining ‘Kattle’ (which is the name given to their road crew) as part of their security team,” Paul explained.

‘Strange Times Are Coming’ started life as a standard Vespa T5, which Paul got free through a deal with a pal. Paul’s choice for the style of paintwork came from a friend’s scooter from the early 80s, which he’d always admired called, ‘Cracking Up Over You’. “I’d always wanted a heavy cracking effect paint job and I needed a theme. I realised that in the 80s The Meteors did a song called, You Crack Me Up, so this gave me the overall link I was looking for.”

Having decided on the style of paintwork Paul discovered that the paint was now unavailable due to it having cyanide in it! “I wasn’t going to leave it at that,” he said. “I was sure I’d be able to find an alternative, which would get me the look I was searching for.”

Paul’s tenacity paid off and in the most unlikely set of circumstances he came across a solution. “I’d gone with the missus to B&Q to buy some wallpaper, and I saw this two-pack paint kit. It was meant for ornaments and home items but gave a fantastic breaking up paint finish, which looked perfect for the scooter.”

Having bought a couple of cans Paul got them home and tried them on a tester piece of steel; and with a bit of trial and error he eventually got the finish he was looking for. However, the question remained: would it be strong enough to stand up to the weather conditions? “I needed to be sure that the paint wasn’t going to drop off so I hunted high and low for a suitable lacquer. After being told by a few ‘specialists’ that there wasn’t one available on the market which would be strong enough and be petrol resistant, I found a possible product at a one of those pound shop/bargain places!” Paul laughed.

With a can of lacquer purchased, Paul applied it to the tester piece and left it submerged for 48 hours in a bucket of petrol. Returning to check the outcome; and expecting it to be a complete mess, to his astonishment the lacquer had stood up to the test. “It just needed a little run over with some polish and it was perfect!” Paul smiled, “I couldn’t believe it!”

Paul set about the build and took to the frame with his angle grinder and started making the required alterations. Using a steady hand, keen eye and his wife’s dinner plates as a template the legshields and side panels were trimmed.

Paul cut to size, and welded a piece of scaffolding across the frame to support the petrol tank. Sections were cut out from underneath the seat and the back end of the frame was cut off. The back end of the frame was then turned round to provide a lifted element to the rear of the seat, which gives the perfect angle for the registration plate and rear light set up, and helps create the dipping mid-frame ‘scallop’ effect, which Paul was looking for.

The PX headset gives the scooter the classic Vespa look, while at the same time keeping everything balanced and neat.

The sections cut off from the legshields were adjusted and welded to the frame underneath the seat, and allow for the fixing points for the self-fabricated twisted steel grab-rail. “I’d managed to get a set of Candy Twisted 6in extended forks for the scooter. They looked perfect; and so to carry on the effect through the scooter I wanted a twisted steel grab-rail,” Paul explained.

In order to make the grab rail, he bought a length of twisted steel and set about fabricating the sections he wanted for the job. “I realised it was going to need a lot of heat so I put it in the vice on my workbench and set up my heat/paint stripping gun in a position pointing at an angle towards it! I left it for a couple of hours and then managed to bend the sections into the shapes I wanted.”

The graphics on the scooter were completed by The Image Works and are still images taken from the Strange Times Are Coming video, band members’ signatures and The Meteors logo.

The scooter runs on a standard T5 engine with a SIP road race exhaust and sounds sweet. It fires up with a crackle and zips nicely through the gears, which keeps the power delivery smooth.

The overall build of the scooter took 15 months; taking a step back and looking at the scooter, Paul appears to have got it perfect. The smooth flowing lines start at the base of the forks, work upwards towards the headset and then flow smoothly along the petrol tank dipping effortlessly under the seat and gently rising towards the rear of the frame where the shaped areas of the sidepanels emerge to bring both flows together perfectly.

“The scooter’s a ridden-in custom,” Paul explained. “That’s one of the things I’m determined about. For me; it’s the old saying ‘a scooter should be ridden and not hidden’, and that was what I was wanting to achieve with ‘Strange limes Are Coming’ I wanted a rideable custom cut-down chopper scooter, which would be able to stand up to the mileage I’d be clocking up throughout the season.”

Name: Paul Reeson
Scooter club & town: No club – lone rider.
How and when did you first become interested in scooters: in 1983 due to my mates being Mods and me being into psycho scene. Psychobillys were just starting to get scooters.
First scooter: Li 150 Silver Special given to me by next-door neighbour.
Favourite style of custom scooter: Anything where the owner has put effort in themselves! Not just an open wallet.
First rally or event: Morecambe scooter rally ’85.
Favourite and worst rally/event: Best: Disc Rally ’85, first on scooter. Worst: Blackpool ’90.
Funniest experience with a scooter: Overtaking my mate on the A1 coming back from the IoW on my PX125 while I was having a quick sleep!
Furthest you’ve ever ridden on a scooter: Fort William, 450 miles each way.
What do you like/dislike most about rallies: Like meeting old friends and making new ones. Dislike food vendors’ prices on site! Enough said.

Name of scooter & reason: ‘Strange Times Are Coming’ (The Meteors).
What other themes did you consider before this one: ‘Cracking Up Over You’ by Roy Hamilton, because of the paint I wanted!
Scooter model: Vespa MK1 T5.
Inspiration for project and theme: The theme is The Meteors and my inspiration for it is being a member of The Meteors’ road crew (Kattle).
Time to build & by who: 15 months start to finish by me.
Engine spec: All standard Vespa T5 apart from a SIP Road Race exhaust.
Describe performance, power delivery and scooter handling: Smooth power delivery as required but with extended forks as it can be jittery in bends!
Are there any other unique details we have missed: Headset changed to PX as I’m not a fan of the T5 headset, also front disc brake added.
Paintwork & murals done by: Paintwork done by myself with rattle cans! Yes, believe it or not! Murals are decals by The Image Works lacquered in by myself.
Overall cost: £1800-ish.
Has the scooter won any show trophies: Nottingham Knights SC EMSA night 2017 Best Custom. Nottingham Outlaws SC EMSA night 2017 Best Vespa. Hucknall Blue Boar SC EMSA night 2017 Landlords Choice. Beat the Biker 2017 Best Chopper. W.O.T. Rally 2017 Best Chopper. Burton Brewers Custom Show 2018 Runner-Up Best Vespa. Burton Brewers Custom Show 2018 Runner Up Best Vinyl.
Is there anyone you wish to thank: A big thank you to my wife Lisa for letting me build it and have parts all over the house for 15 months! A big thank you also to Andy Wilson for helping me with the rebuild. Keith Newman for the one-off parts.

NO STRANGER TO CUSTOMS

Paul is the previous owner/builder of the fantastic looking Vespa Chopper ‘Death Stalker’, which appeared in Scootering in December 1993, the scooter had springer forks and took two years to build.

The Meteors formed in 1980 and are often credited with giving the psychobilly sub-genre its name. Fans (known as the Wrecking Crew) are known to use the slogan ‘Only The Meteors are pure psychobilly’ (often shortened to ‘OTMAPP’).