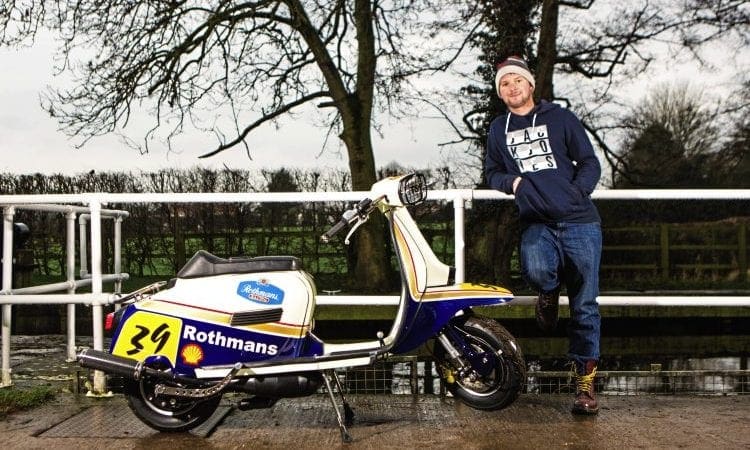 From an early age scooters were an integral part of Dan Etherington’s life. Growing up surrounded by scooters and scooterists, it was preordained that he would continue the family tradition by becoming a second generation scooterist. 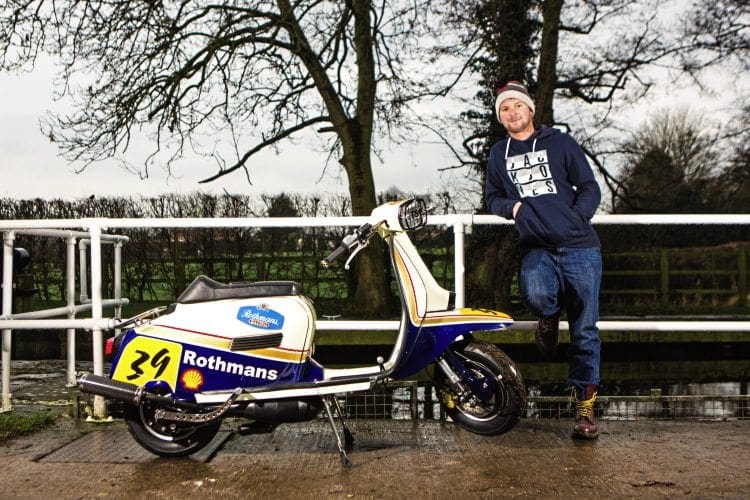 “Ever since I was very young, as far back as I can remember, there have always been scooters around,” says Dan. “First I watched my dad working on his scooters, then progressed to passing tools to him. Eventually I became capable of actually helping him work on his scooters. My first time on a scooter was on the back of my dad’s Li, on a ride out through Harrogate. I was about 10 and the lasting memory is my dad sitting so far back on the seat that I was pushed into the backrest and I couldn’t turn my head.” 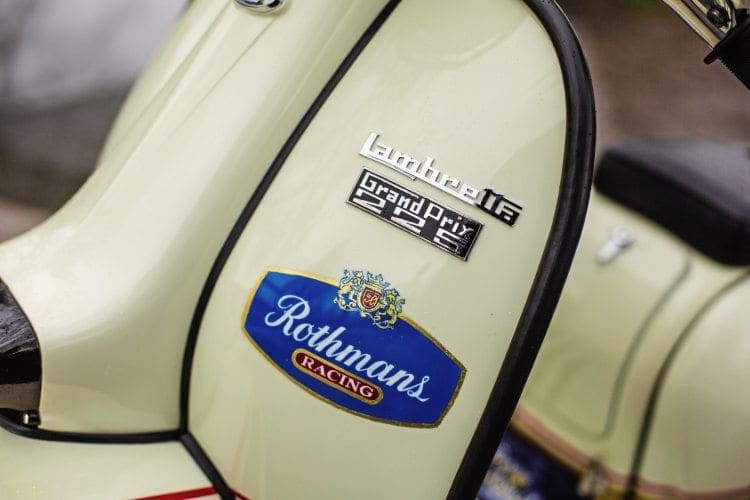 As well as a lengthy apprenticeship of sorts with his dad as his mentor and teacher, supplementary education was supplied by his stepdad Wayne. 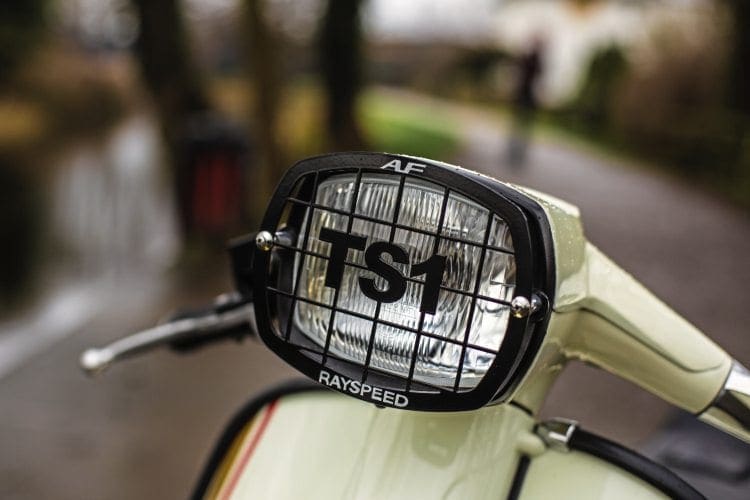 “Biased though I probably am, my favourite custom scooter ever was my stepdad’s cutdown Lammy: Rat Fink. Wayne helped in the build of my street racer by offering lots of good, useful and helpful advice. Rat Fink, with its 80s-style appearance was a part inspiration for my street racer, along with me spending hours trawling the internet, looking at old street racer scooters and tapping into the brain of Col, at Scooter Artwerks. My stepdad sold Rat Fink a month or so ago so it’s timely that this is ready just as that one departs.”

For those unfamiliar with custom Lammy Rat Fink, it features the obligatory 80s pike-nuts and chrome, with artwork inspired by Ed Roth, regarded by many as the innovator and driving force behind the US hot-rod culture of the 1950s and 60s. It runs a tuned AF 175 engine with a DJ pipe and 30 mil. It was finished in 2009, with the base model being a 1966 Li.

Beating your own path

Although he has a lifetime of being surrounded by scooters, having been brought up with them all his life, Dan is very much making his own way on the scene including building his first custom scooter, which is the subject of this feature. 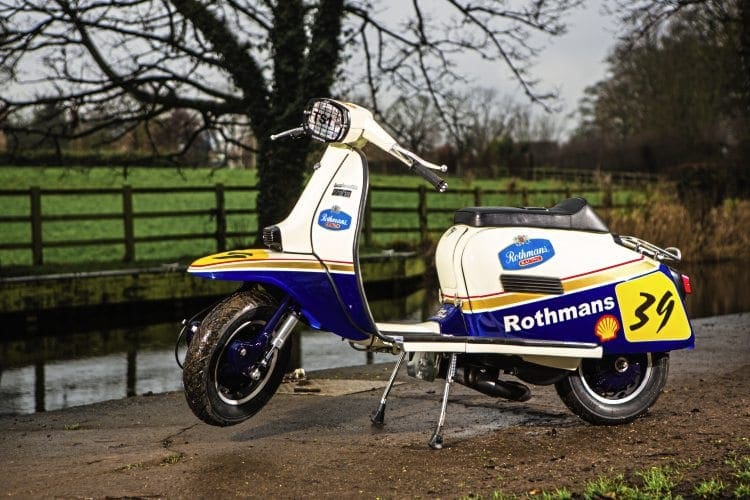 A source of frustration, even annoyance, for Dan, is the superiority complex he occasionally encounters from a handful of older scooterists who look down on him and his mates presumably because they are young. “We’ve all grown up with scooters, we ride serious distances on our scooters, which we maintain ourselves. I don’t know what the problem is with some older ‘fellow scooterists’ at certain rallies, when they come into contact with us. Maybe they’ve forgotten what it’s like to be young. There’s a group of 10 of us who ride together; I’m the only one who rides a Lammy.

“Needless to say, I’m always the first to take the piss when one of the Vespas breaks down! I’ve shared a couple of the milder stories of some of the things we’ve experienced on my spec sheet answers. Let’s say there are a few other, more idiotic ones too, which we’ll keep to ourselves to protect the guilty!”

After obtaining the GP some 18 months ago Dan farmed out the frame and bodywork as well as a few fittings plus the exhaust system to either be painted or powder-coated. In the case of the pipe it was for heat dispersant paint. Midas provided the powder coating, while Col at Scooter Artwerks had the commission for the paintwork and graphics. 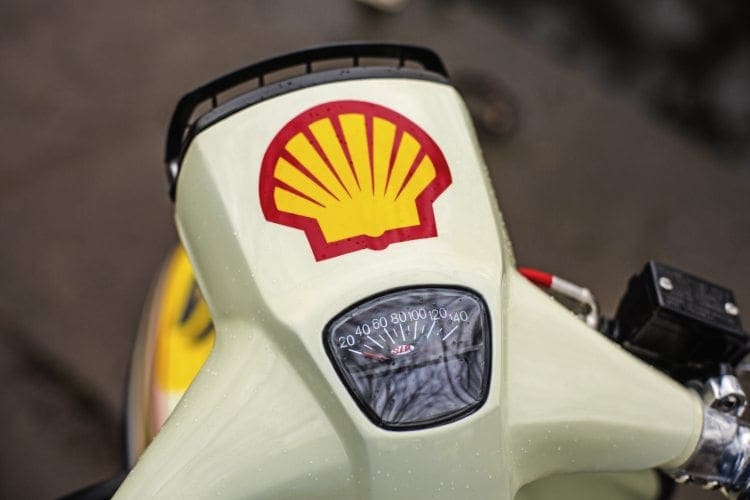 Dan is rightly proud that once the parts arrived back he did all of the build himself. This was with a bit of help from his dad, which was a reversal of how things were when he was a youngster. “After it got back from being painted, it turned out to be a long process, longer than I anticipated.

“It took me about nine months to finish, though I work away during the week, only coming home on weekends. Trying to balance family time with my social life and working on my street racer wasn’t easy. Our lass wasn’t best pleased when I’d disappear on a Sunday evening and head straight to work from working on my street racer, I let our lass name my scooter, it’s not what I’ve chosen myself, and she chose the name ‘Lady’… so Lady it is! I had a bit of help from my dad with the actual build, as well as advice from both my stepdad and my gaffer at work, who’s into engines, on putting together the engine. The engine has a TS1 225 top end, which can often be a bit juddery at low revs.

“I went for a Varitronic ignition (see panel below), it was a lot easier than I thought to set it up. It really does make a hell of a difference, at low revs it’s so much smoother and much more responsive. Now I’ve got my street racer registered I’ve started the running-in process, which has been a pain in the arse sticking to how it’s supposed to be run in. Fuel consumption so far, while I’m at the start of running in, is ridiculous. It seems to be drinking the stuff. I can’t wait to get it run in and then set up on the dyno.”

Looking at Dan’s Lammy street racer with its iconic tobacco company logos emblazoned on the bodywork, the thought arises, regarding the impending implementation of UK law, after its 12-month grace, regarding the packaging of tobacco products. Will Dan be changing the livery of his street racer from how it is now to a dull olive green, in line with the required uniformity of packaging? “Absolutely not! Why mess with classic designs? It’s ridiculous, it will make buying cigarettes, or any tobacco products, take even longer than buying lottery tickets!”

First interest in scooters: Been brought up with them with both my own family and mates’ parents all into them. I never had a choice!

First rally or event: My earliest memory is going to a ride out through Harrogate sat on the back of my dad’s Li that he had at the time when I was around 10 years old, him pushing me into the backrest. 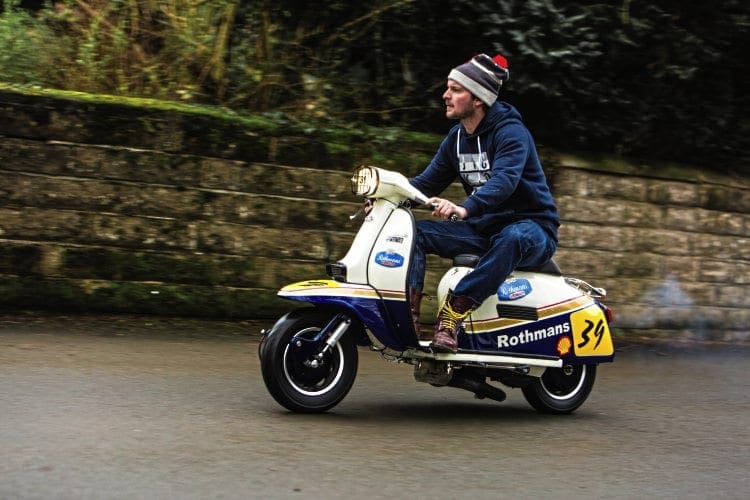 Any stories: We went to Holland a few years back and me and my partner in crime, Charlie, got a little childish after a few ‘quiet’ ones. On our way to our cab for the night, he stupidly knocked on a security door so off we ran. Us being idiots ran straight to our room and got into bed, only to be rudely awaken by the heal, of security five minutes later. Had our passports taken from us and had to give a sincere apology.

Funniest experience with a scooter: Flying past my mates only to miss the crossroads sign and shoot straight across with a police car coming in the opposite direction, wasn’t quite so funny at the time!

Most useless part ever bought for one of your scooters: A flashing HT cap for some reason. 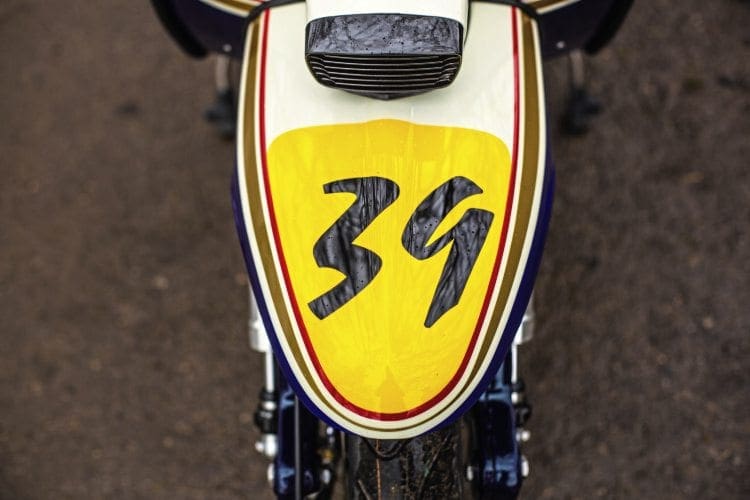 Name of scooter: Lady — I let my lass choose it.

Inspiration for project: A mix of trolling the Internet looking for old race designs and picking Colin’s brain!

Time to build & by who: By myself and my old man in a crowded shed.

Are there are any specialised parts: Flux capacitor, everyone needs one.

Porting work by: Myself.

Any powder coating: Few bits done by Midas. Toolbox, tank and the exhaust in heat paint.

Hardest part of the project: Time, with working away from home it’s been hard balancing family, friends and shed time fairly!

Do you have any advice or tech tips for anyone starting a project: Buy everything before you start, nothing worse than trying to do something and realising you haven’t got all the bits!

In hindsight, is there anything you would have done differently: Made my mind up on parts before I ordered, got loads of spares now.

Is there anyone you wish to thank: My stepdad Wayne and Latchy for advice, Col for the paint, my girlfriend for her patience and my best mate, who happens to be my dad, for everything he’s done.

Correct ignition timing is vital to avoid problems such as detonation and holed pistons in a scooter engine.

Classic Italian scooter ignition setups are fixed — the spark plug fires at the same point on each revolution of the crankshaft. This worked fine back when these bikes were made but tuned engines using today’s high ethanol fuels can benefit from an improved ignition setup.

Varitronic provides a variable, self-adjusting ignition, which retards and advances as needed to improve power and performance all round. Cambridge Lambretta Workshops have been working with Tine Sacchi for some time now, so who better then to give a run down on Varitronic ignition than Cam-Lam’s Trevor Peat.

When did you first encounter Varitronic ignition?

I can remember going round Milan show with Tino, before Varitronic ignition was beyond prototype. He had a flywheel in his hand and armed with some designs and a sales pitch. Tine designed Varitronic ignition for Lambrettas based on race experience and the first examples were on sale commercially from late 2003.

What comprises the Varitronic system?

It includes a stator plate, CDI, lighting regulator, wiring diagram, spanner and flywheel. The latter, after a few different weights, has settled at 1.85kg. Indian ones are 2.6kg. CDI and regulator are both made in Italy. The regulator runs both AC and DC, and the system delivers an output of 80W.

What are the advantages of Varitronic?

It allows the timing to advance at low revs giving an increase in power, and the option of backing off at higher revs which helps in avoiding engine failures. Variable timing, especially when set up to suit a particular engine, is as good as it gets currently.

How has Varitronic ignition evolved?

I’ve already mentioned the flywheel weight which has changed since Varitronic was first commercially available. From only being compatible with engines with longer taper GP type crankshafts, there’s Varitronic ignition available for pretty much every model of Italian Lambretta. Most recent Varitronic ignition has been made for TV Series 1 Lambretta.

There’s Casatronic, which uses the same stator but a different rotor as Varitronic, Vespatronic which works on all vintage Vespas from GS to P-range and with a bit of manipulation some earlier Vespa models too. Other variable ignition timing systems such as Malossi-tronic and Parma-ironic for example are also available. Cambridge Lambretta workshops can provide our own special setup based on Varitronic ignition, with a strengthened stator and a unique map box to suit any tuned Lambretta.