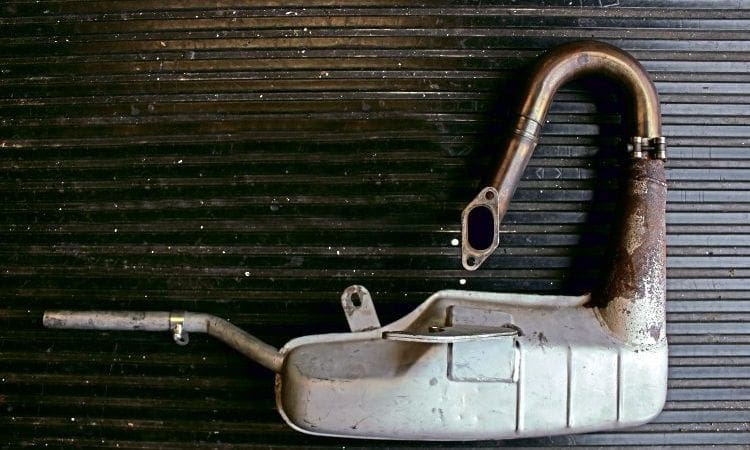 After blueprinting and setting up a standard Lambretta engine, Darrell Taylor embarked upon a series of experiments to see what power could reasonably be attained from step-by-steo tuning of a SIL200 engine. This month, back to the clubman!

One step forward and two steps back

Having progressed the performance of the engine through parts 1-4 of this series (see previous editions) we are now going to remove the expansion exhaust and return back to the Ancillotti clubman exhaust while still running the ported cylinder setup, to see how it responds to the changes made so far. Clubman pipes are still very popular and what they lack in pure horsepower and torque, they make up for in readability. With their diagonally shaped power delivery shown on a graph, it results in a motor that’s willing to pull at any rpm range without falling into a flat-spot, like those often encountered on most expansion pipes. These expansion flat-spots are particularly prevalent at around 4000-5000rpm, and when combined with a carburation hiccup or splutter it can be hugely annoying in third and fourth gear areas that are often needed to be clean and rideable around town or at lower touring speeds. 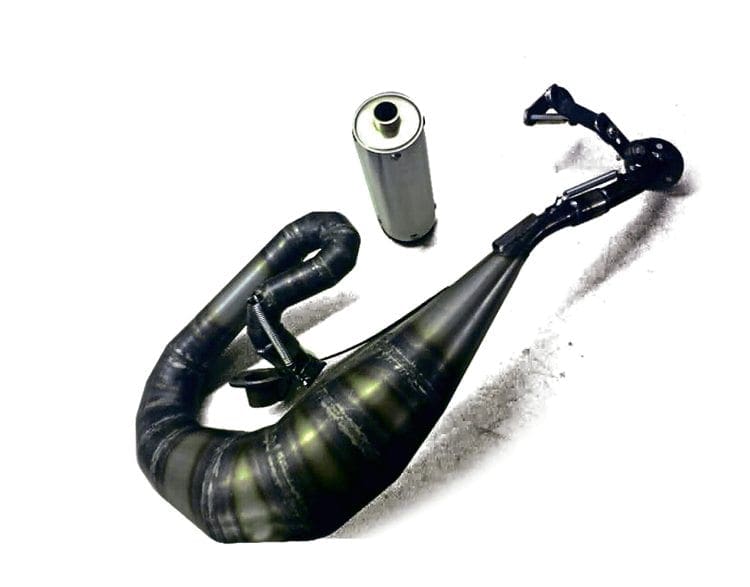 The clubman pipe often negates the requirement to add an advance/retard unit to the ignition system as with no midrange flat-spot to clean up, static timing setups work fine. Unlike the shortcoming of expansion exhausts, which require running leaner jetting or higher compression to fill the power curve, the clubman does not require such action to be taken. On the downside, clubman exhausts lack the outright power to push the larger scooter through the air and onto higher speeds which many want to achieve these days, as well as missing the thrill of a potent two-stroke ‘kick in the pants’ delivery that many love. So the lure of the clubman and its pleasant touring nature often splits riders into two groups: two-stroke power/thrill seekers and those who prefer smooth touring. A recent addition to the market is the range of ‘super clubman’ exhausts from the likes of Gori and BGM, that try to bridge the gap between original systems like the Ancillotti and the more hooligan type expansion chambers, with dyno tests showing they sit mid-way between the two camps in terms of power. 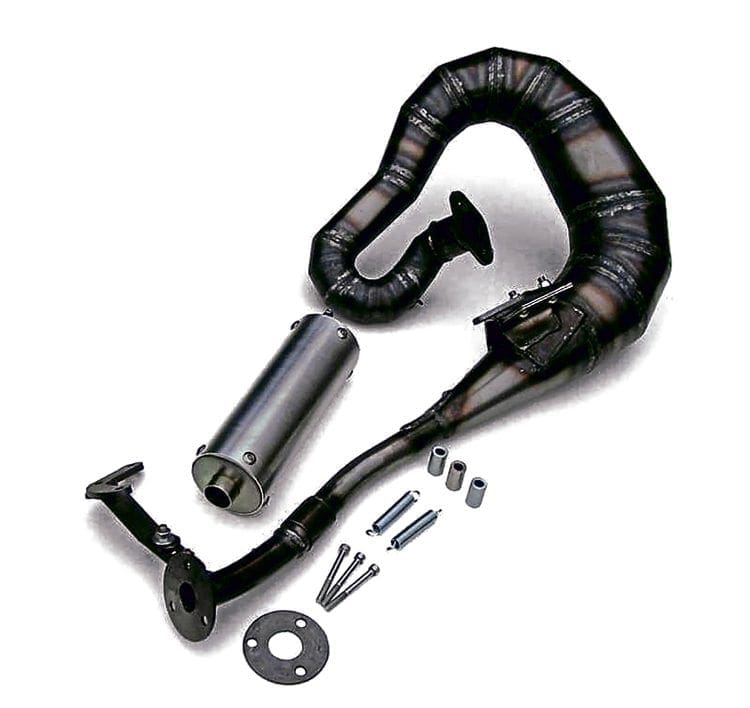 This shows the Ancillotti clubman on both the standard cylinder and the tuned cylinder. The standard cylinder’s result at low rpm is slightly better, averaging 1bhp more up until 4800rpm and is pretty much all done by 6800rpm. While looking at the tuned cylinder, this goes on to make over 3bhp more at peak, and now holding on until 7800rpm. The curve shape has remained diagonal despite the exhaust duration being raised, so will ride the same as before. 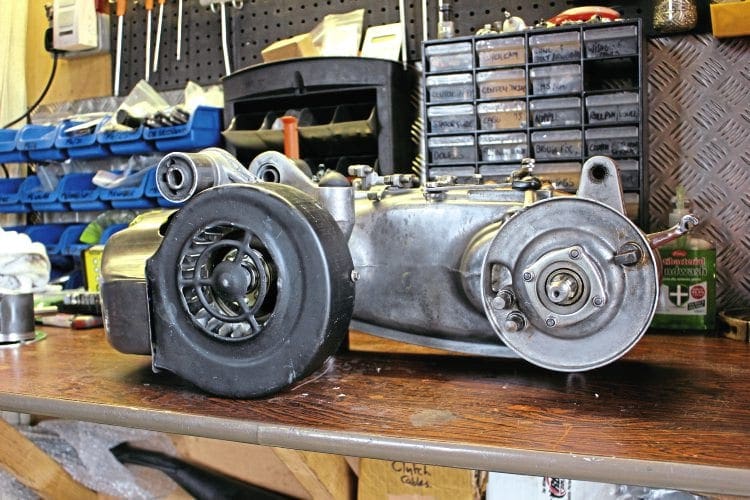 As well as testing the clubman it was a good opportunity to test alternative expansion exhaust which I had to hand on the tuned set up, as it had a matching sized exhaust stub making for a quick change of pipe and sets up a nice comparison of an Ancillotti (clubman) and Chiselspeed ADS3 expansion (a low rpm torque biased pipe) and an AF Rayspeed NK rally expansion (a mid-rpm torque/hp balanced pipe). It’s an interesting comparison as it does show how an exhaust system and its tuned length has a huge effect on a motor’s operating rpm range, overall power and delivery characteristics, more so than a cylinder’s port specification will. A pipe that’s really short in length can rev on to 12,000rpm, which is a figure double that of a long pipe which might ‘hit the wall’ at 6000rpm. I suppose a working example of this is the small-frame vs large-frame Vespa tuning setups which, in order to get similar performance figures, use both ends of the rpm range, but leaves the high rpm output more suited to racetracks/sprinting with service schedules in terms of weeks/ months, and the lower rpm output more suited to daily riders with service schedules on an annual basis. 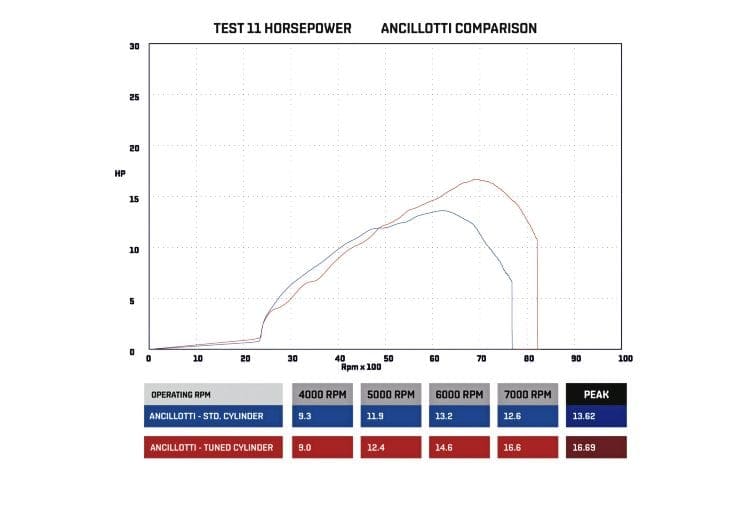 This shows the Ancillotti clubman vs ADS3 vs NK Rally. The first surprise to most will be the rpm range at which peak power is produced at on the clubman — it is the highest rpm of all three pipes… which is often the case! Most perceptions are that a clubman is a low-rpm exhaust, but the truth is that when they are coupled with higher exhaust duration they really rev on. I’ve seen over 10,000rpm on some setups. You can see from the steepness of the curve how much harder the power hits with the ADS3, and the NK Rally shows a similar steep delivery.

It’s this delivery which puts a smile on those ‘expansion loving’ owners’ faces, compared to the clubman’s diagonal power curve which is fun but not too exciting. On this setup the ADS3 drops off at around 6000rpm so will require tall gearing to capitalize on low down power and its early rpm cut off. At around 10mph per 1000rpm on average gearing setups, the ADS would top out at 60mph. The NK Rally however, makes useful power up to 7500rpm, so on average gearing that equates to around 75mph.

Both pipes would need very different gearing on the road. The difference here with the two pipe/gearing options means one would be revving higher than the other to achieve the same road speed. With that rpm change, fuel economy and engine wear would differ. Longer term issues (e.g. 5000 miles at 6000rpm or 5000 miles at 7500rpm) start to become a consideration with pipe choice. 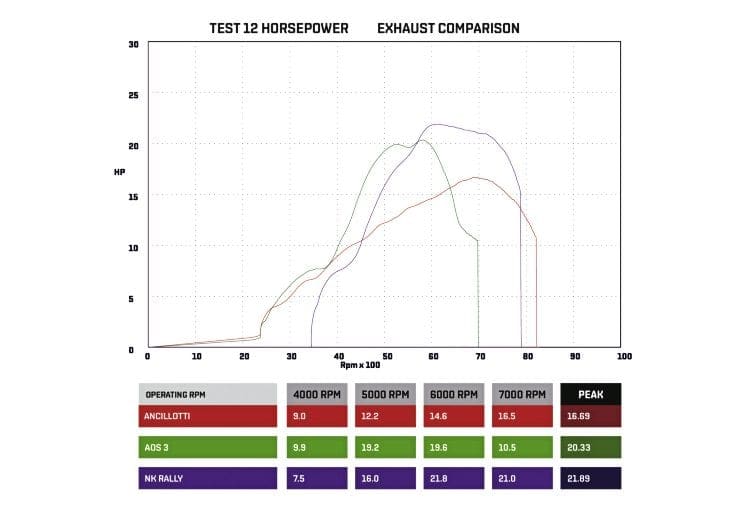 This shows the ADS3 to have the highest torque figure of all the pipes at 20.2lb-ft, which comes as a result of making its peak power lower down the rev range. The clubman is down over 71b-ft torque at peak, but at around 3500rpm it has 2.51b-ft more than the expansions. But it’s worth pointing out that on a motor which ticks-over at around 1500-1800rpm, it’s often at around 3000rpm where the rider engages the clutch to set off, so would only momentarily see this benefit. The rpm drop between gear changes won’t ever drop down this low once moving, therefore the small gain of the clubman at low rpm is rarely seen, whereas the power benefit of the expansion is often seen. 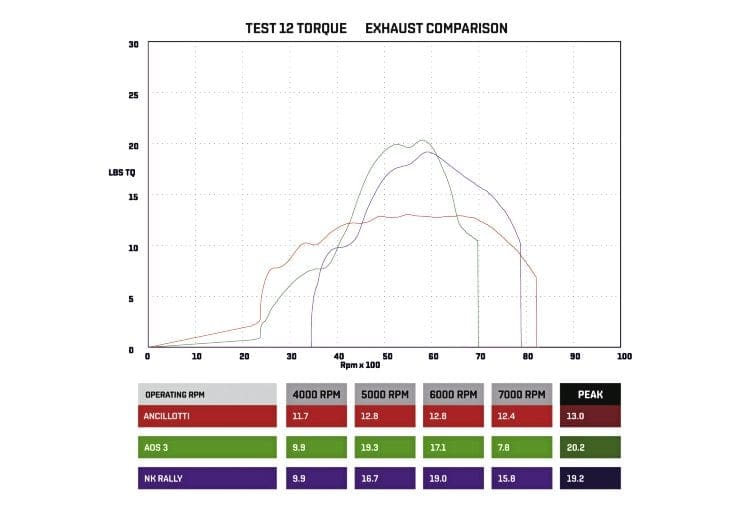 A planned/future change to a 60/110mm crank left a last test to complete on this original setup, which is to reinstate the corrected compression ratio which was lost as a result of raising the exhaust port duration. The uncorrected figure would be increased by machining the cylinder head face and squish area in the lathe to reduce its overall combined volume, to achieve a similar corrected figure as had been used before but still at an acceptable uncorrected figure.

This test shows the results of the compression change, with a result of moving the whole power curve over to the left with more power being achieved at lower, mid and peak power rpm, but by 6500rpm the power drops off not allowing the motor to rev on quite as well as it did before.

This would translate on the road to faster acceleration (due to more power) but a lower top speed (due to lower rpm range, unless the scooter is re-geared). This is where an advance/retard ignition unit (for example M-tech, Agusto, Variotronic etc.) can ‘free off’ the motor by retarding back the ignition timing to regain that lost over-rev potential, at a point where the compression begins to fight against the ignition advance. The motor has picked up another 1hp at peak, now at 22.93hp. 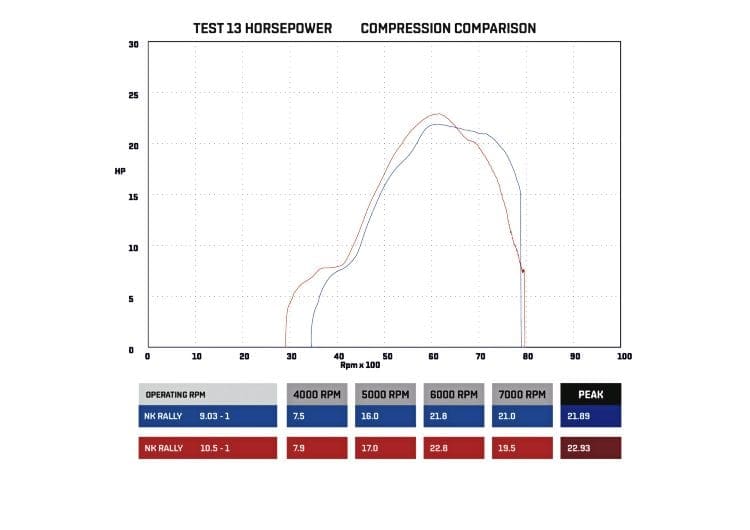 This shows the strong low-rpm increase at 3500rpm upwards that we had hoped to recover from the compression increase with as much as 21b-ft more in places. 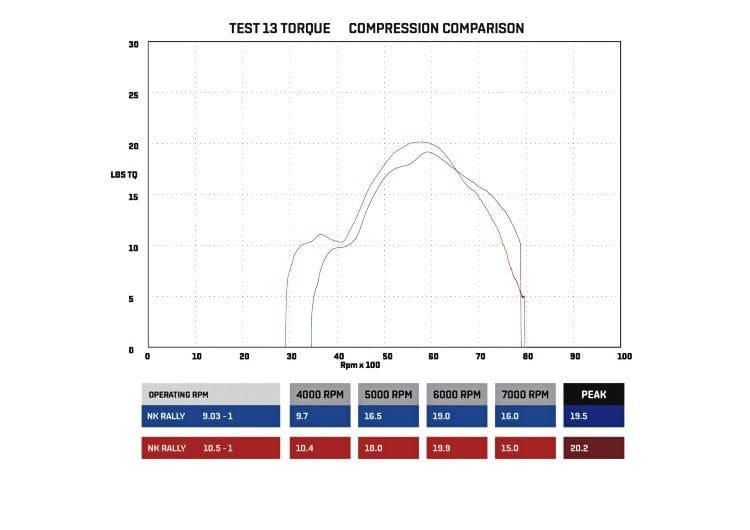 That’s all for this month, next month we look forward to the installation of a 60/110mm crank in order to test and review what ‘long stroking’ does to the motor, as well as a change/upgrade of piston. Stay tuned.