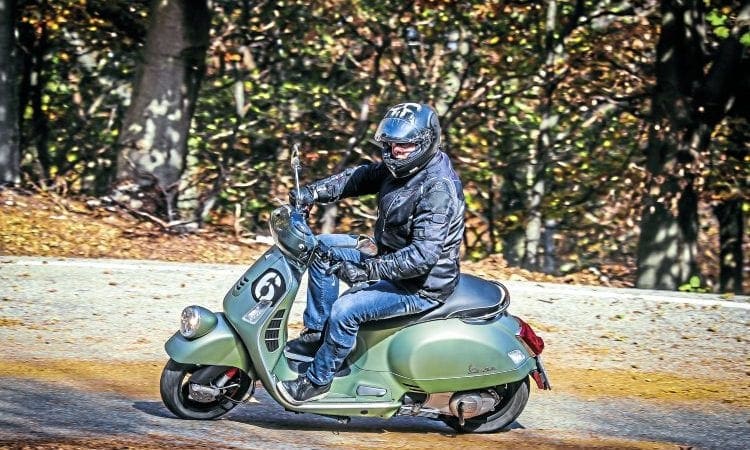 Can Vespa’s new Sei Giorni be a fitting tribute to the legendary 1950s racers? Stan took one around the original circuit to find out.

When the Vespa team secured nine gold medals in the 1951 International Six Day Trial it was a victory that Enrico Piaggio could not have foreseen just five years earlier. Although the Vespa was launched in 1946 as an affordable form of transport, it was inevitable that the Italians would find a way to race it. The launch of Lambretta in 1947 created a natural rival for Vespa and as the two marques fought for supremacy, scooter sport was born.

Vespa approached the challenge by producing sporting editions of production models, the first of which was a highly refined edition of the 98. Bright red in colour these ‘Circuito’ (circuit) models enjoyed considerable success.

The International Six Day Trial (ISDT), now the International Six Day Enduro, is the oldest event on the International Motorcycling Federation’s calendar and is widely regarded as the Olympics of motorcycling. First held in 1913, the early events took place on a mixture of roads, tracks and race circuits, testing a variety of disciplines and riding skills. When it was announced that the 1951 event was to be held on Italian soil, Vespa rose to the challenge and developed the ‘Sei Giorni’ (Six Days) racer. Even by contemporary standards Piaggio’s ambition was incredible. The ISDT was contested by the world’s major motorcycle manufacturers who fielded teams of experienced riders. The success of a ‘shopping bike’ in such an environment was by no means assured.

The 1951 Sei Giorni Racer closely resembled its production line relatives but was almost a new machine. Modifications included a larger fuel tank, streamlined leg shields, twin spare wheels, a strip map container and of course a tuned engine that required a larger engine side panel to accommodate the carburettor. Suspension and braking were also improved but that was by contemporary standards.

The venue for the 1951 event was the province of Varese, approximately 35 miles north of Milan. Varese was the ideal venue for a motorcycle trial event as the region is dominated by seven hills and the Circuit at Monza was available to host the speed trial element of the competition.

The Vespa team consisted of 10 riders; Biasci, Cau, Granchi, Mazzoncini, Merlo, Nesti, Opessi, Riva, Romano and Vivaldi. At the end of the contest the Vespa team secured a total of nine gold medals. Three riders – Giuseppe Cau, Miro Riva and Bruno Romano – would go on to win the Motorcycle Italian Federation Trophy. It was success beyond Piaggio’s dreams, generating publicity across Europe and proving to the world of motorcycling that the little Vespa was a force to be reckoned with.

In common with many corporations, Piaggio’s attitude to its past has wavered over the years and it’s currently riding a wave of nostalgia. The new Sei Giorni is different to the Primavera and Super Sport GTS as it celebrates a specific event in Vespa’s history, demonstrating a genuine awareness of its heritage. As Piaggio’s Alberto Cani explained: “We wanted to create a tribute to the original team, the pioneers who did so much to establish Vespa on the world stage.”

Although Vespa insists that this is neither a GTS nor a GTV but a standalone special edition, at heart the Sei Giorni is an American market GTV in a smart new suit. The satin green finish is unique to the Sei Giorni as are the vinyl race numbers and special edition plaque. Before Vespa pedants hit the keyboard, the number 9 isn’t intended to represent one of the original riders, it acknowledges the 1951 event’s medal tally.

Other detail changes include a satin black exhaust heat guard and Sei Giorni liveried wheels. There’s a full range of accessories too, from clothing and luggage racks to the Vespa Multimedia platform which connects the Sei Giorni to a smartphone transmitting real time engine management and performance data.

I first saw the Sei Giorni at last year’s Motorcycle Show in Milan, and must admit to being quite taken with it. The GTV’s ‘Faro Baso’ styling always sold well in the UK so its absence from showrooms has been slightly confusing and the prospect of a special edition was intriguing.

I’d awaited its arrival in the UK with anticipation so when Dan asked if I fancied attending the Sei Giorni’s press launch in Varese I jumped at the opportunity. Like everyone who visits the Piaggio museum at Pontedera I’ve admired the historic racing machines on display and contemplated the courage of those early riders.

The opportunity to ride part of the original circuit, actually following in their tyre tracks was too good to miss. I’d also heard mutterings about how the latest Euro regulations had ‘strangled’ the GTS engine and was keen to see how it compared to my 2012 model.

Making a rare appearance outside its home at the Piaggio Museum was the original racer and although it was confined to static duties at the hotel, it presented an opportunity to compare the two machines side by side. It was immediately apparent that in common with the Mini and Fiat 500 the Sei Giorni’s put on a few pounds over the years, but then again so have I.

Initial impressions of the production machines are good. Piaggio has recently opened a new multi-million Euro painting facility at Pontedera and this investment is reflected in the quality of finish. Sitting astride the machine presents a very different outlook to the GTS. The chrome handlebars and short screen are more akin to a motorcycle, although the speedo is comfortingly familiar to anyone who knows the PX. Switchgear is firm to the touch and came to hand more easily than on my GTS. My current pet hate is the trend for stepped seats. For tall riders they’re exceptionally uncomfortable but the Sei Giorni’s seat gets full marks all round.

Although the front retains the height of a standard seat its shaped rear end means that I had the perfect riding position. Not once in the four hours of test riding did I feel uncomfortable or have to shift riding position. Our ride was never going to produce any surprises as to how the Sei Giorni handles as it’s a GTS and rides as one would expect.

The City Grip tyres, fitted as standard, ensure it’s sure-footed and the main stand is still easy to ground on left handers. What surprised me was the Euro 4 compliant machine’s performance. From the outset our Italian guides were ‘spirited’ in their riding techniques. Despite having fewer than 500 miles on the clock the Sei Giorni responded well to throttle both from a standing start and on the move. Prospective buyers can be reassured that for real world riding there’s no discernible difference between this and the earlier models.

The main event was to experience part of the original six day circuit and after a couple of photoshoots we took to the hills. The section we were to experience was a stretch of the SP8 between Cittiglio and Sant Antonio. I’m no stranger to mountain roads and peaking at 1036m the Cuvignone Pass is nowhere near the highest I’ve ridden, but it is the steepest. A gentle start soon gave way to a series of 90 and 180 degree turns, all arriving in quick succession as the road scrambles up the side of the hill.

With altitude the road became narrower and trees seemed to form a tunnel, enveloping the road. Bramble stems dangled from the canopy, scraping my helmet as I attempted to keep up with the pack. I’m not afraid to admit that I’m no racer, I’m much happier pottering along taking in the view and with leaves covering the road I found that I had reached the limits of my capability and comfort. That’s not to say this stretch of road is unrideable — far from it. The combination of history and technical riding involved make it a worthwhile diversion for any scooterist who might happen to find themselves nearby.

At the top of the pass I had to marvel at the 1951 team who rode the same stretch of road when it was little more than gravel on a 125cc two stroke with 8in wheels and drum brakes. They more than held their own against the cream of trial riders and deserve to be remembered. The new Sei Giorni is a fitting tribute.