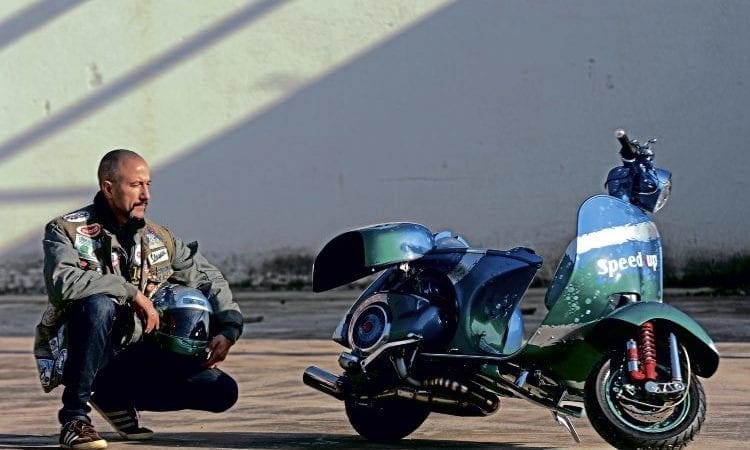 It has been said that the classic Vespa is a work of art. Christian Giarrizzo meets a man who blurs the line between art and engineering.

The city of Manzano in Udine, north-eastern Italy, also known as the City of the Chair for its close association with furniture manufacturing, has many hidden surprises. 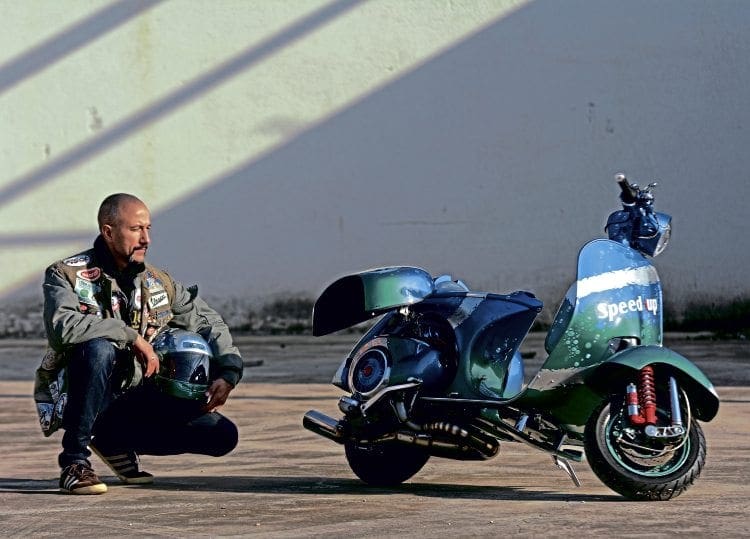 Its industrial past and present have created a large community of skilled artisans and among their number is Nicola Tuniz — a man who can make objects that seem to possess a soul of their very own.

Entering his workshop, the guest’s first surprise is Nicola’s antique carpenter’s bench — its scarred surface may be strewn with well-used files, saws and clamps, but there is also a pristine computer, mouse and notepad. The second surprise is what he uses these modern tools to create.

Drawing me closer, he shows me that he is in the process of digitally forming a new saddle structure for a small-frame Vespa. He tells me that this is just the first step in a process that will progress all the way to building the saddle itself, finishing it and finally painting it.

It will not be made as part of a large production run, however.

“Seriality does not lend itself to the artistic act,” he says. “The artist should not be a scholar when he crafts. The objects he creates must be limited in quantity, otherwise his art is at risk of becoming industry.”

Facing Nicola’s bench sits the frame of a Vespa 50, catching the sun as it filters softly through a large window. Tuniz approaches the frame, leans in, and caresses it with the craftsman’s more traditional tools. Modelling paste is rounded, filed and shaped into the appearance of what can only be the seat which, just moments ago, we were looking at on screen.

“Everything beings with an idea,” he says as he works. “Many times I will make sketches in the morning just after breakfast. When I am convinced by what I have drawn, I will lock myself in here and start to work the clay.”

As I watch, it is evident that the process of moulding clay to realise an idea is far from simple. The clay is placed on a support structure — usually made from pieces of wood — as an awkward formless mass, before being carefully teased into the desired shape by the artist-craftsman.

Using a sequence of deft gestures Nicola continues to work his medium. He cuts it, adds to it and sculpts it anew. The notes of a Beatles song drift aimlessly across the room, mingling with our conversation as the act of creation takes its course.

“This transaction between artist and artwork does not follow a specific timetable,” he tells me, his eyes never leaving the clay. “Sometimes it is half a day, sometimes only 20 minutes. Everything depends on the level of my pleasure. When I sense that the form in front of me has reached a state of harmony with my main idea, I stop.”

I wonder aloud where Nicola’s desire to shape materials in this way came from.

“It has been a passion of mine since I was a kid,” he sighs. “I took the bike and spent whole afternoons on the banks of the river Torre, where I found natural veins of clay running through the gravel. I even brought some of it home in jars and tried to make my own dishes and objects of various other kinds.

“I didn’t enjoy much success at this, I have to admit, but it was an experience of pure pleasure. It wasn’t only the clay that fascinated me. At 13 I made myself a smoking pipe — without even really understanding how you smoked. I believe that when the urge to exercise manual skill calls, you should follow your own heart and your own inspiration.”

He takes a step back from the clay. Now it is evidently time to turn to another part of the process. He takes two containers and begins to prepare a mixture of chalky powder and water, setting a stopwatch before he begins to stir the mixture. In no time at all, the workshop has become a laboratory. Spatulas are brought to bear and their tips become coated in plaster, lime and clay.

A splash of soapy water ensures that Nicola’s mixture — once hardened — does not stick to the clay. He adds a compound of glass-fibre strands and like a chef garnishing a vanilla cake, he pours above the moulded green base.

“When forming the first layer you must make sure that there are no air bubbles,” he confides, eyeing me from behind the lenses of his glasses. “Accuracy in the base layer is key because the glass fibres need to be arranged successively.”

The gypsum he has mixed reacts immediately — the mildly cold conditions in Nicola’s workshop doing nothing to slow the chemical reaction. Layer by layer, alternating the composition of the glass threads with chalk, Nicola builds up what will later become the mould. As the operation proceeds, a silence descends on the workshop-cum-laboratory. There is a faint moaning sound as Nicola runs scissors over the glass strands — a test which confirms that the work is proceeding as planned. We are interrupted at this point by the sound of a scooter. Enea has arrived on his Vespa ‘Speed Up’ — a machine that is yet more proof of Nicola’s creative genius. It is glorious to observe ‘Speed Up’ in motion; the last time I saw it was on the cover of Scootering 15 years ago. Enea is well prepared for the questions that I am naturally eager to ask.

“Work on modifying the scooter began in 2001,” he tells me. “All the tack and welding points were removed from the frame and a new sheet metal nose was created to make it all one shield. Next came a fibreglass seat that was based on a SIP design and the recessed light of an Aprilia Gulliver was fitted.” Enea carried out these modifications himself and fitted a 177cc engine he had prepared with the aid of a Mr Moro who at that time was working in Aprilia’s racing department with the young Valentino Rossi.

With this first round of alterations completed, ‘Speed Up’ was displayed at a host of rallies and custom shows until one day, after some routine maintenance, Enea and Nicola decided it was time to customise it further, Filled with the joy of creation, they both got a little carried away.

A new custom seat was made from fibreglass, complete with an air intake for the engine and a cap for the integrated retractable fuel tank. A fibreglass fairing was made without the speedometer and all-digital equipment was fitted. Switches for the ignition, lights and displays were installed in the trunk and turning lights were added to the ends of the knobs.

New fibreglass rear side panels were made 5cm lower and fitted in such a way that they open outwards like those of the old Vespa ‘gullwing’.

A spoiler was added under the shield, the front brake disc was modified, chromed and airbrushed, Bitubo shocks were fitted, lowering the front by about 5cm, and a new engine was fitted too. This was a Polini 210, custom-tuned by Enea with new crankshaft, reinforced clutch and Dell’orto carb.

I’m unable to hide my excitement at the prospect of being able to photograph this engineering wonder under the glare of the midday sun and I notice a reciprocal glow of enthusiasm in Enea’s eyes. He shows the scooter off as if it were his girlfriend and tells me delightedly of his latest adventures, the rallies he has attended and the new projects he is working on.

As he talks, my own gaze strays back to the scooter. It is some 15 years on from the first time I saw ‘Speed Up’ and it looks, if anything, even more beautiful and proud that it did before. It’s magnetic – I can hardly tear myself away from looking at it.

Eventually, though grudgingly, I turn back to the task at hand. The plaster has now hardened in Nicola’s workshop and everything is ready for the next, final, stage. The compound layered over the clay has solidified and can be separated from the underlying form. With a snap, Nicola opens the plaster shell before disappearing through a side door. After a while he returns, mixing a yellow-green liquid around inside a glass jar. More chemicals. This time though, it’s a compound to harden the plaster. Another is used to solidify the fabric. 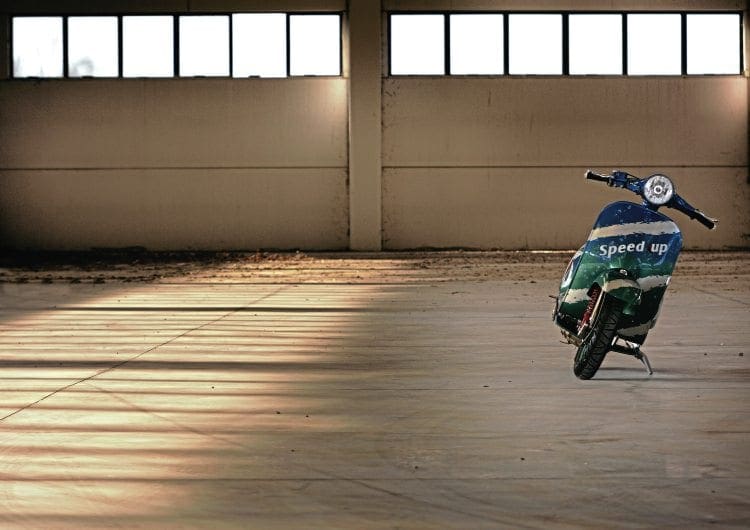 Finally, the fibre strips are stretched inside the plaster mould, which will be broken apart when Nicola needs to reach the finished product. He meticulously stretches the fibre with a brush and taps it to make sure that the resin has adhered well to the carbon fibre.

The timing of all this chemistry can vary depending on the mix but as a rule, it all happens very rapidly. Wiping his brow with one hand, he hands me a beer with the other. It’s the moment of truth: he breaks the plaster shell and we peer inside, expectant. A supremely light structure is revealed which – once it’s finished and painted – will become a very fine Vespa seat indeed. 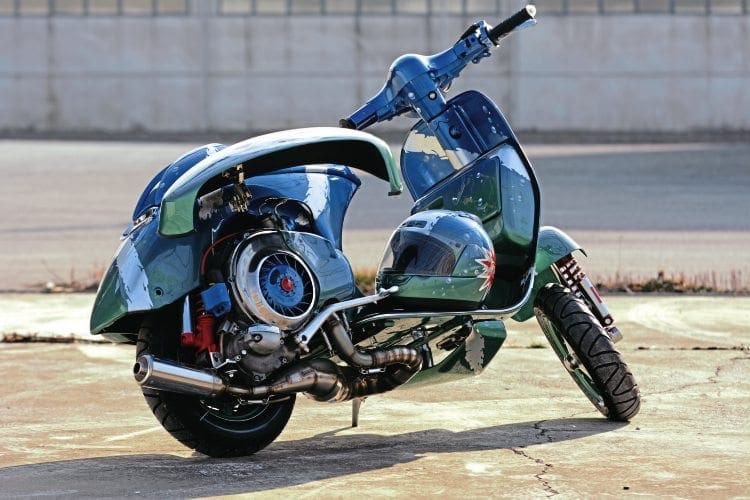 Relatively little time has passed but it feels as though we have been on a journey – its course determined by the deep knowledge and experience of an artist who seamlessly blends the skills of a modern-day alchemist with the technical abilities of a talented engineer. This is a man who has found a way to make his dreams become a reality.