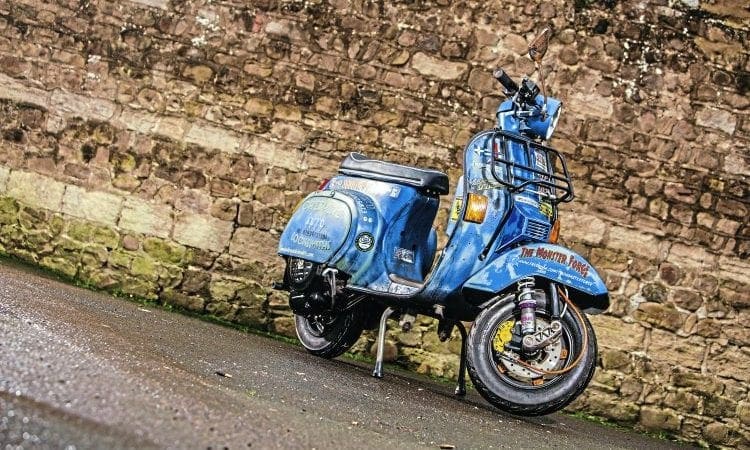 A Rusty little Rat, which hides a powerful street-sleeper engine inside… just the thing for eating up Harleys out on the road! 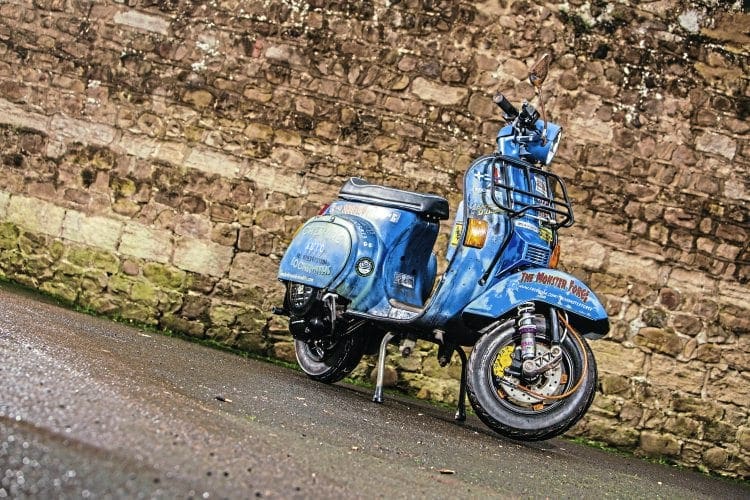 There has always been a counter culture in scootering for ‘more go than show’ especially in modern times as increasingly powerful performance kits have become available. Call them what you want: street-sleepers, rusterations, rapid-rats, etc. each genre basically gives the impression of neglected ‘old crow’ body but with the hidden assets of a supermodel. For many years, this type of ‘wolf in sheep’s clothing’ class mainly applied to large cc Lambrettas… yes, I have come across a few rapid smallframe models but they were often a ticking time bomb just waiting to explode their metallic entrails in the middle of the motorway! 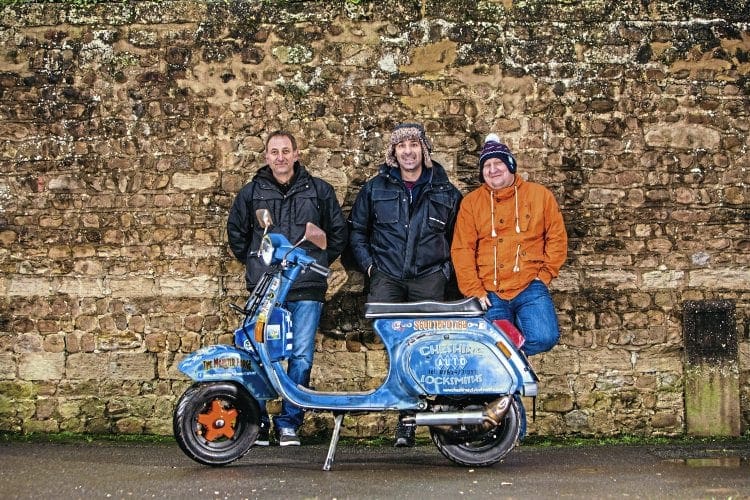 However as I said earlier, barrel/piston kits and subsidiary parts (cranks, clutches, gearboxes) have been produced to give not only power and performance but also sustained durability. Also unlike my early days of ‘tuning’ people have a more scientific attitude to carburetion and electrics, and through the use of dynos and computers can get near perfect jetting and ignition settings. The smallframe you see here is built and owned by Stefan Manoli from Manchester.

He has only been involved in scootering since 2008, but as a youngster he loved tinkering with anything mechanical, especially pocket rocket motorbikes — FS1Es, RDs, etc. Anyhow, after a few years of rallying on fairly ‘standard’ machines he fancied building a super quick smallframe, and was on the lookout for a base model for this project. So when, last summer, a PK125 came up on eBay, he contacted the seller with a cheeky £1000 offer to end the auction early. The seller refused, but Stefan entered the bidding and won it for £682 — result!

The PK had been stood for almost nine years, so let’s just say it wasn’t in the best condition cosmetically, but structurally it was sound. To keep the ‘used’ look he enlisted Phil Appleyard from the Monster Forge for the freehand old style paint job. It was then time to turn his attention and cash to the subject of the engine. This came to almost £4000, starting with a pre-tuned Quattrini M2 200cc kit, it runs a Quattrini full circle crank, 38mm flat-slide Dellorto, Quattrini exhaust, and Falc clutch. Now it boasts 30bhp and 19.51b-ft – money well spent! To aid handling/ride other quality parts were added from Mark Robinson Scooter Italia Parts, SIP, Dave at Wasp and also Scooter Centre. In all it has taken about seven months to complete the build and the scooter lives up to expectations!

How and when did you first become interested in scooters: About nine years ago, I was more of a bike person but always loved the scooters.

Favourite scooter model: I love so many but small frames do it for me. 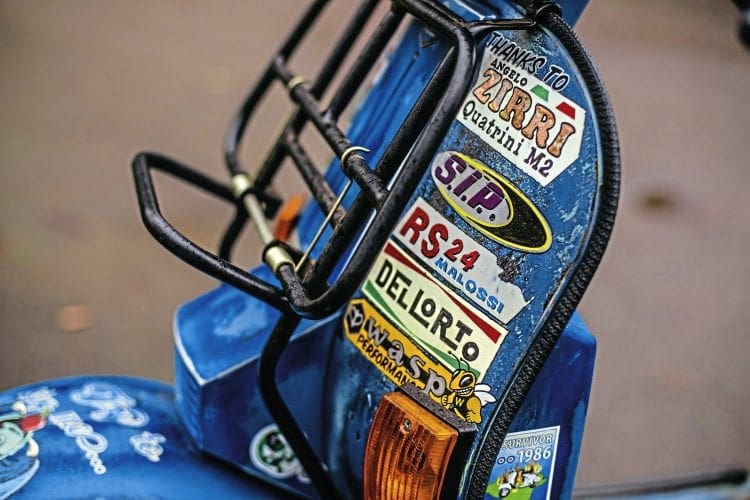 Any stories: Woolacombe, my pal Simon loses the smallest part of a scooter on the fuel station forecourt – a Dellorto needle split pin. Never laughed so much in my life; closed the pump lane and did a military style grid search sweeping motion, both of us on our hands and knees – yes we found it!

What is the funniest experience with a scooter: Eating an 850cc Harley on my small-frame Quatrinni M2. On arriving home, my next door neighbor said ‘Bloody hell that’s a fast scooter!’ I then realized it was him on his Harley. 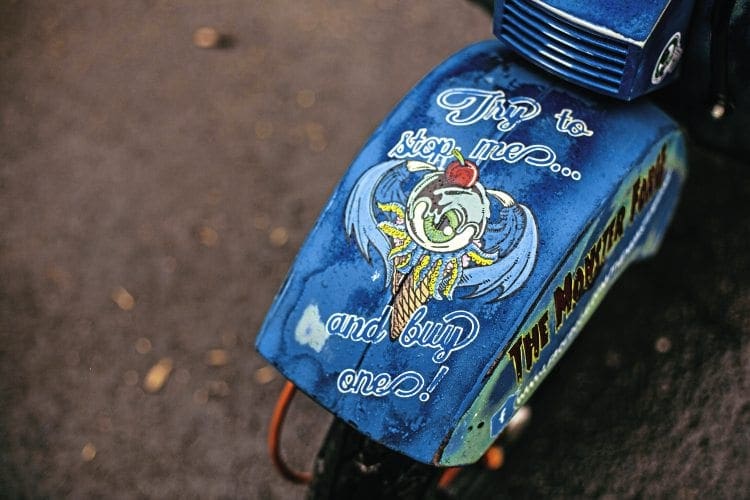 What’s the furthest you’ve ever ridden on a scooter: Croatia 2015.

What do you like about rallies/events: I love it all, meeting cyber pals, the power of social media? Love the scene, music, scooters, beer, the lot! Most enjoyable is the ride.

What do you dislike about rallies/events: I only dislike people who have a pop at the autos. They need to open their eyes as the autos are actually life lines for many that are older and can’t operate the gears. If we are on two wheels respect them all. 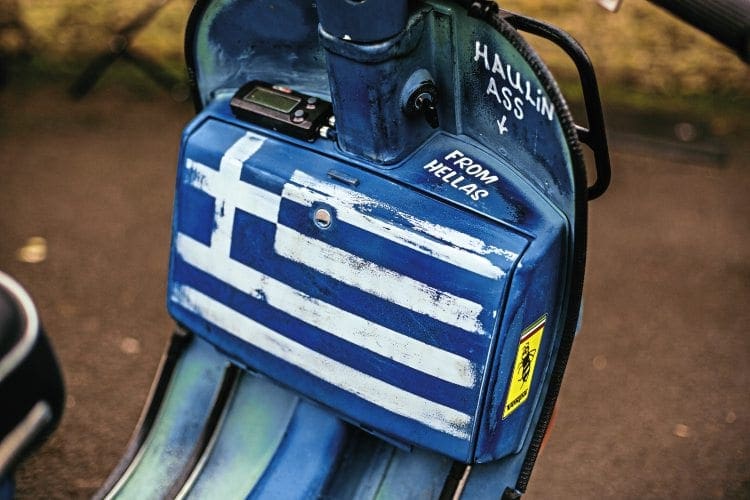 Your favourite custom/featured scooter of all time: Nick’s Mad Manx Lammy S2. The work and vision that’s gone in to this takes some beating.

If you had to recommend one scooter part or item of riding kit what would it be: Pinlock anti mist visor, brilliant.

What’s the most useless part you’ve ever bought for one of your scooters: Vietnam crap, looks good, sounds good, but is crap.

Name of scooter: Nickname is ‘Rusty’.

Inspiration for project: I’ve had customs but fancied doing a smallframe. There are also lots of people who don’t like PKs but this one they’ll remember! 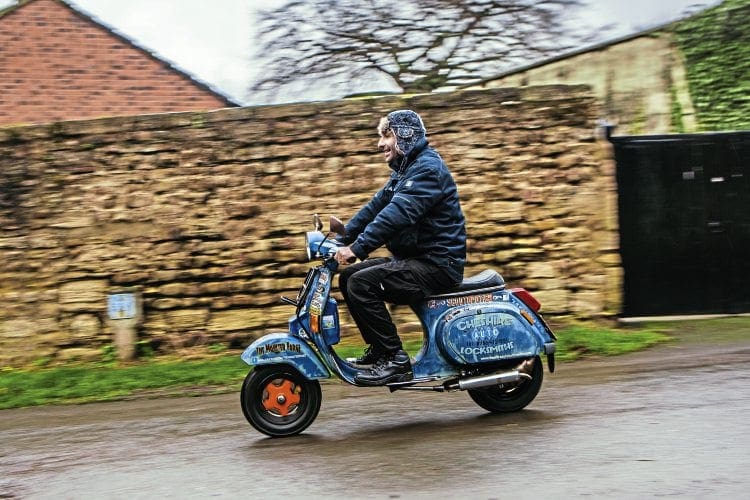 Overall cost: Around £5k but the engine alone came to nearly £4k.

What was the hardest part of the project: Nothing really, it’s a Rat there’s no TLC if I have to fix something on the side it goes!

Any advice for anyone starting a project: Yes: research! It’s so easy to waste your cash, take your time… it will be worth it in the end.