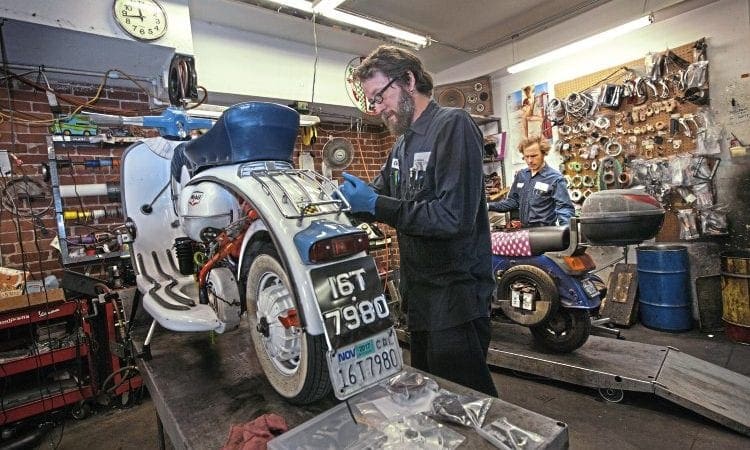 I love vintage vehicles, they just have more soul. I’ve owned four; my latest was a ’58 Triumph TR3. That car spent a good portion of my ownership in the garage being fixed, as Robert, my Grateful Deadhead mechanic, hunted the Triumph graveyards in pursuit of parts. He hunted in places no one would want to live, but that’s where you find the crazy people, the cool people, those who hoard and who stockpile parts.

My introduction to scooters was courtesy of my cousin who took me for eye-watering rides on his ’64 Vespa VBB. I was a kid standing between his knees, and leaning over the handlebars as he steered through the streets. The speed was intense; it laid my hair back. From this moment I always had cool machines on my mind.

Still, I wasn’t moved to actually own a scooter until decades later when I saw hooligans roar past me in San Francisco. They ripped-around a sharp turn and briefly paused at a red light in North Beach, an Italian section of town. To hell with the stoplight! Throttles twisted back, and the curved steeds of steel rode full on while the light was still red. It turned my head, and I was slayed. That’s when I decided I needed a scoot of my own.

I stumbled into the San Francisco Scooter Centre when my Vespa needed repair. Owner Barry Gwin is a long-time fixture in the SF scooter scene, a passionate authority on Lambrettas, and a renegade at heart. So much so he has been featured on a barn find television show called American Pickers, a show that features professional antique hunters seeking to outwit local collectors (hoarders in many cases).

Barry’s been in business since 1986. While he sells and maintains contemporary scooters, he specializes in full-on vintage restorations. If you know Barry well, you’ve been privy to his impressive private collection of more than 40 Lambrettas and a few vintage Vespas. Climbing the stairs above his shop is like entering a time machine. “They all get ridden,” he insists. His stash includes a 1977 Rally 200 with over 300,000 miles on it. There’s also a 1951 Lambretta Model D built for racing. He does sell one of his collectables on occasion, but he always ends up filling the vacant space with another rare survivor. Once in a while sellers come to the door willing to part with their vintage scooter because they need to fill their wallet and empty their garage. While many in his collection are modified, there are also quite a few that are ‘stock original’.

Barry’s older brother and several of his friends all rode scooters, which greatly influenced the teenage Barry. He found two-wheelers provided affordable transportation to school, and then discovered that he had a talent to fix what went wrong. At that time, new Vespas were unaffordable for a school kid. His first ride was a 1980 Serveta Jet 200 from Spain. When Barry was 20 he bought a 1967 Lambretta Silver Special for $550, which is now worth five figures.

Living with his parents in a rural area of Marin County, which lies just north of the Golden Gate Bridge, Barry had a huge yard where he started fixing, and collecting Labrettas. He considers this his first shop. “The scooters were basically free, he recalls, reflecting how little buyers valued the out of production Italian motos, as opposed to the reliable, electric-starting new cycles pouring in from Japan.

At the time the only way to get genuine Innocenti parts was from England. Orders took weeks to be delivered. For a kid the wait felt like forever, as the grass grew higher around his machines. Often, by the time the goods arrived, he was on to another project. 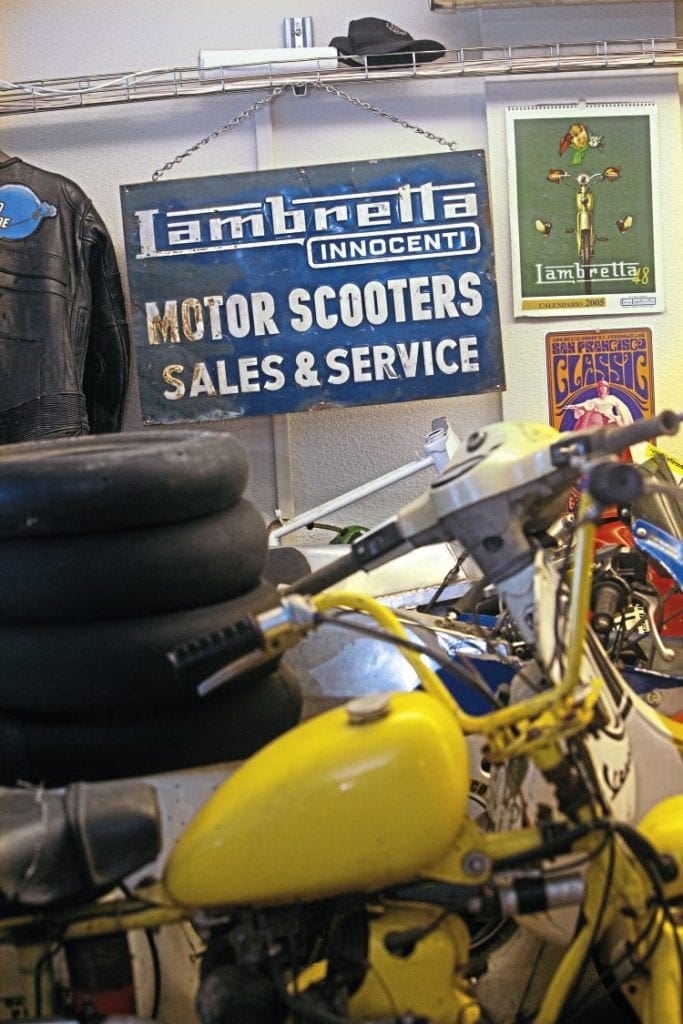 Barry is a member of the Black Sheep, which puts on the San Francisco Classic, a once a year vintage-only rally. He’s cultivated friendships; his clubby crew are tight and consider each other family.

He remembers when there were about half of dozen scooter clubs in the Bay Area when it was really going on. A few of them around in the early days are The Scheming Bitches, the Secret Society, and the Burgundy Tops. While the BTs were from Sacramento, the Black Sheep had a close relationship with them. 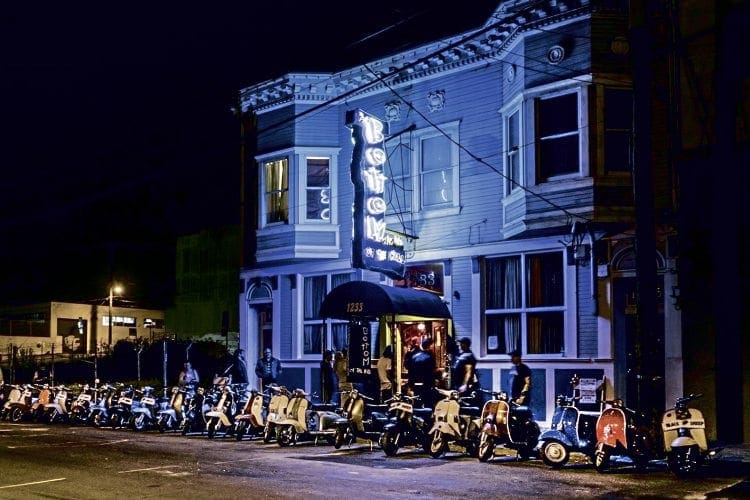 Barry’s love for the scooters gained momentum in 1986 when he opened his first shop near San Francisco’s Golden Gate Park. He found a vendor selling parts an hour and a half away in Monterey, California. Barry soon bought out the seller’s entire Lambretta inventory. Today he employs two full time mechanics along with a shop manager, Diego Torres, who commutes every day on his 1964 Li150 special. “I think the scooter culture in San Francisco is one of the best in the nation. It’s one of the only places in the USA where people ride vintage scooters year round, and you see them being used as they were intended — as daily driver vehicles.” While Barry and his crew are crazy about vintage scooters, modern scooters keep his shop open. “There is no money in restorations,” he admits. When modern scooters became popular, he felt “under duress” to join the trend. “I don’t judge anyone on what they ride,” Barry declares while offering a soothing scratch to his shop dog Buster, an English Bulldog. The San Francisco Scooter Centre today offers a wide selection of gear and accessories along with pre-owned Vespas, Genuine Buddy scooters, and GenZe electric scoots. And of course, the vintage Lammy. Barry noticed that a lot of his customers drive electric cars so he began offering an electric scooter with a $2999 price tag. “The only reason I sell GenZe is to try and preserve the shop,” he says.

Barry says the market is forever changing. In the old days, “people wanted their scoots to look pristine but now they want them to show their age with an original patina on them. Unrestored bikes command the highest resale value.” 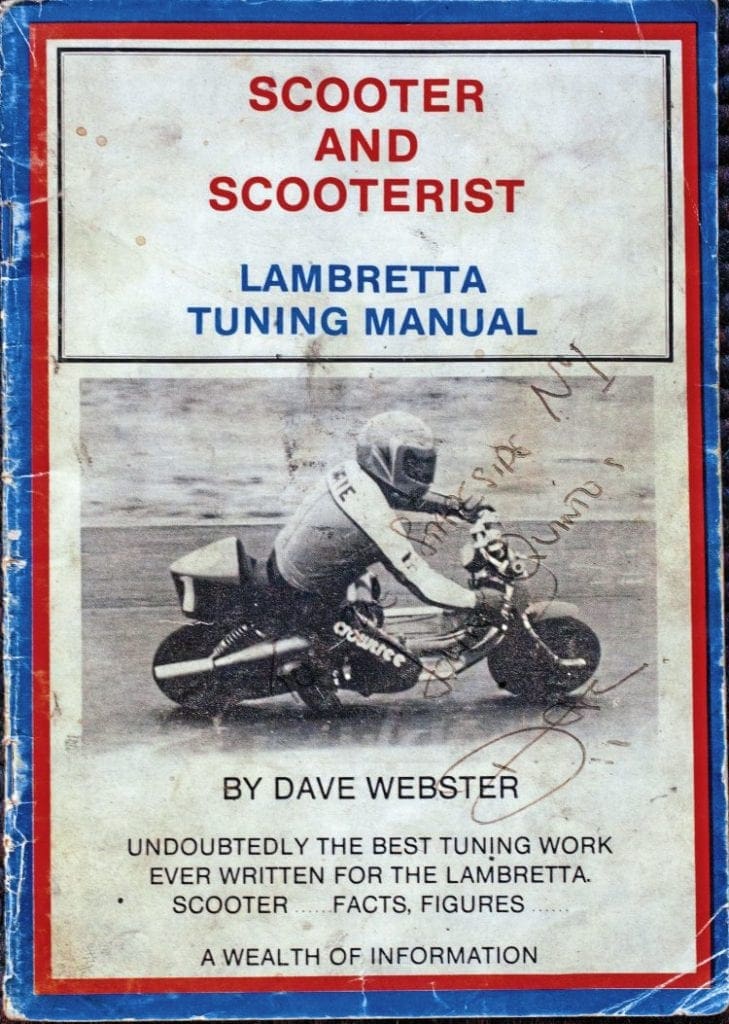 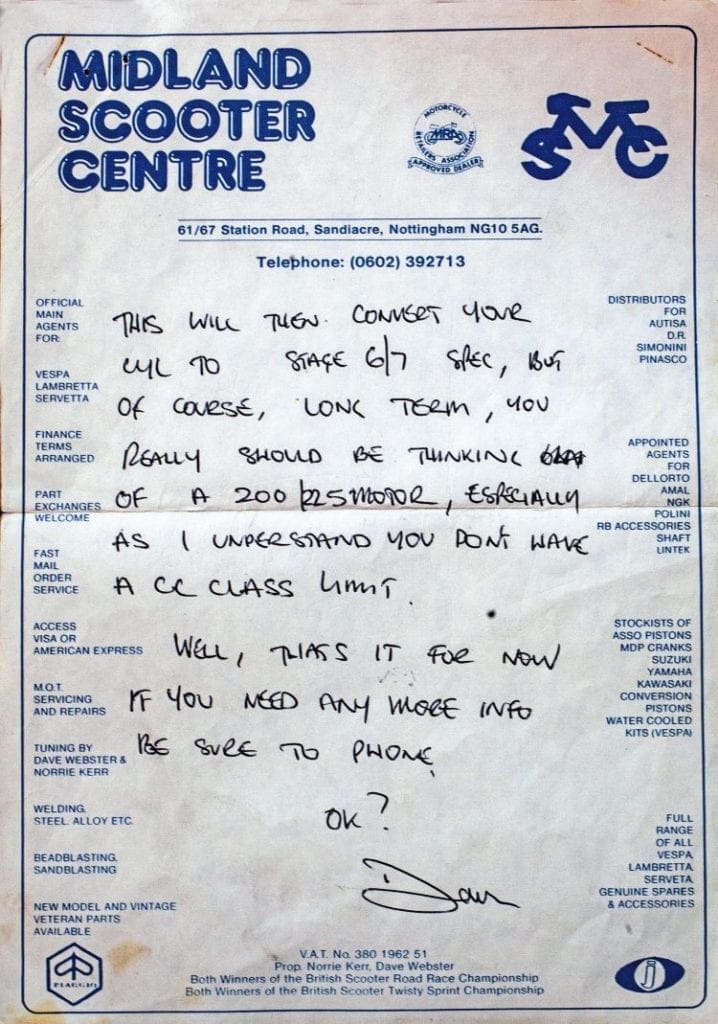 Barry’s been in business for over three decades and takes pride when he talks about his shop crew. “Every person who works for me owns a home.” The success of the shop allowed him to put his son through college. His job, at this point, is “providing customer service, writing repair orders, answering the phone, and walking Buster”. 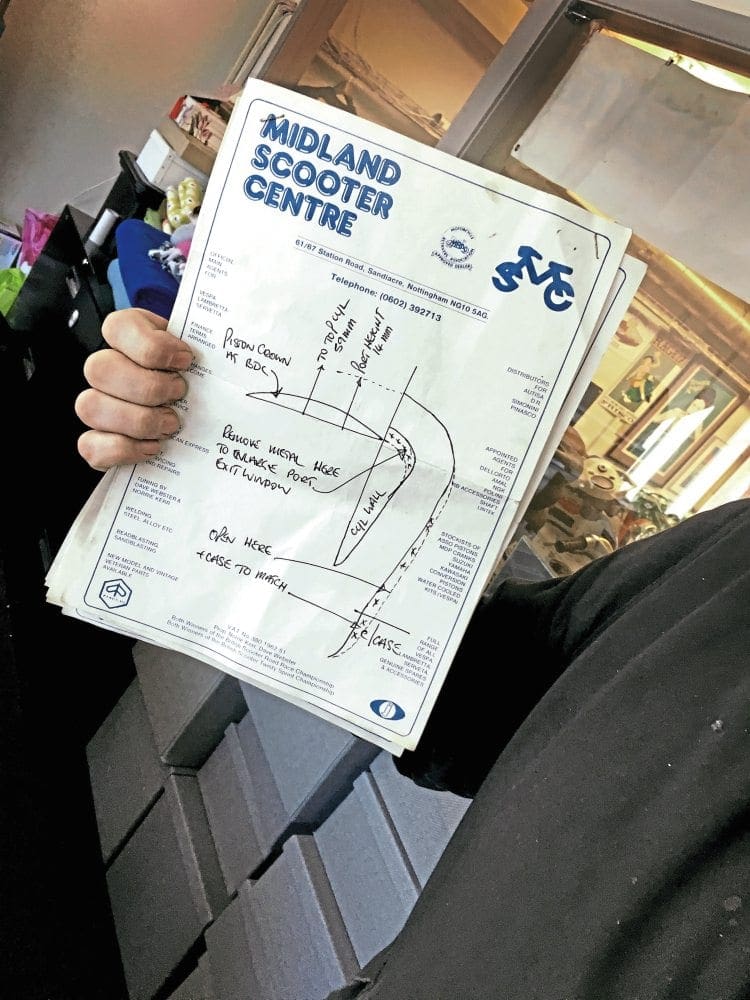 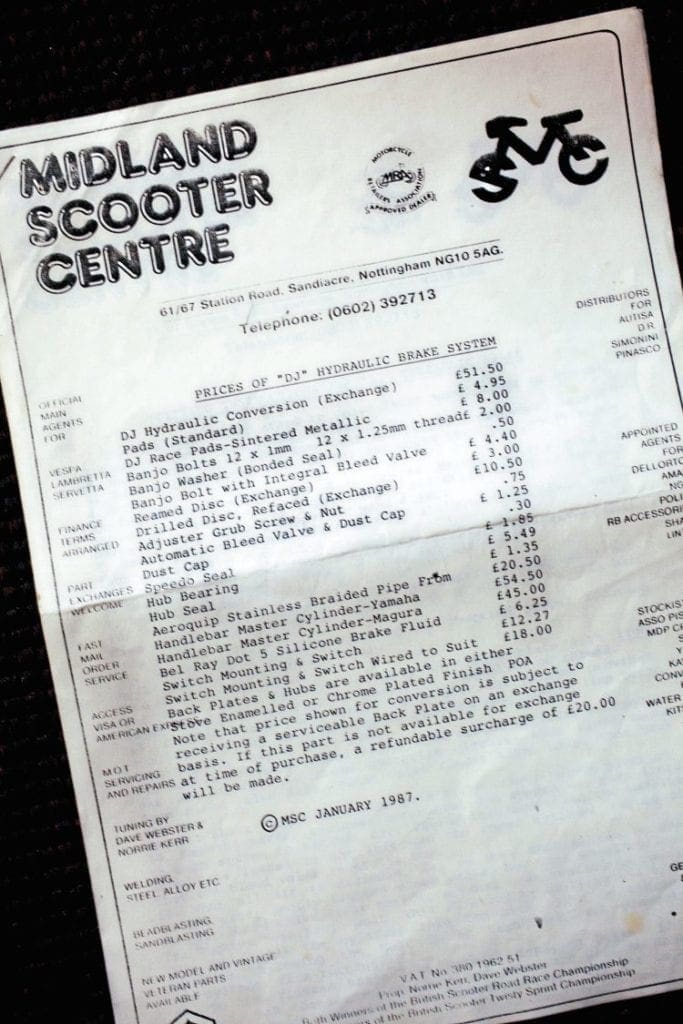 Shop manager Diego Torres, six years into his gig, still enjoys every day: “It’s definitely a blast to be a part of the shop and I look forward to going to work even to this day.” www.sfscootercentre.com 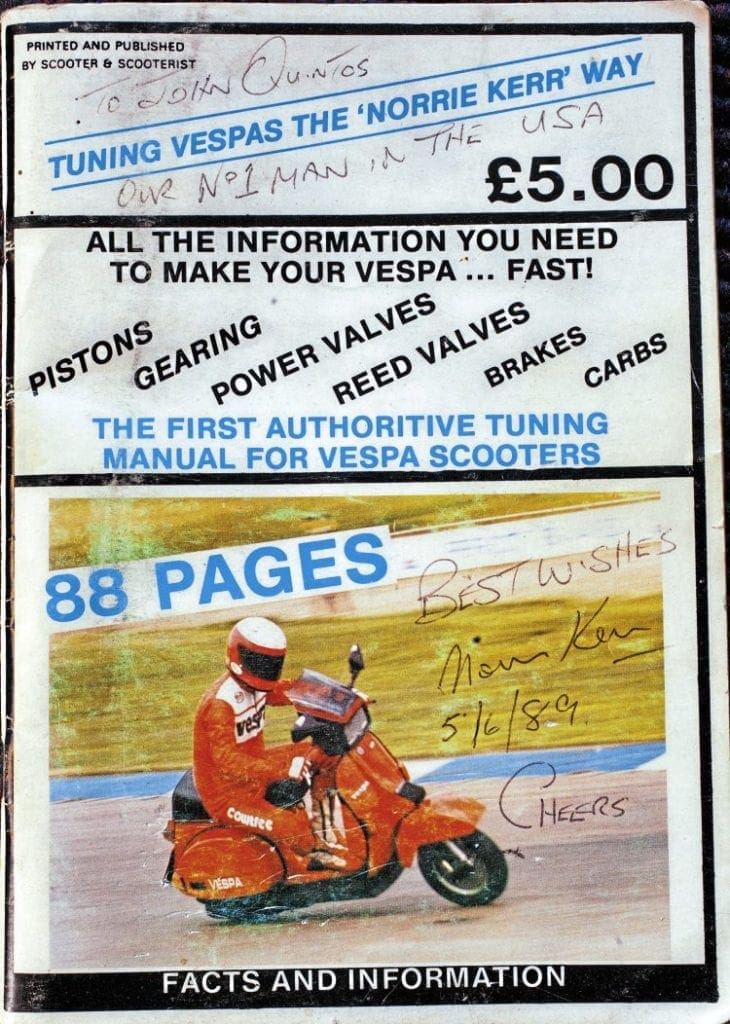