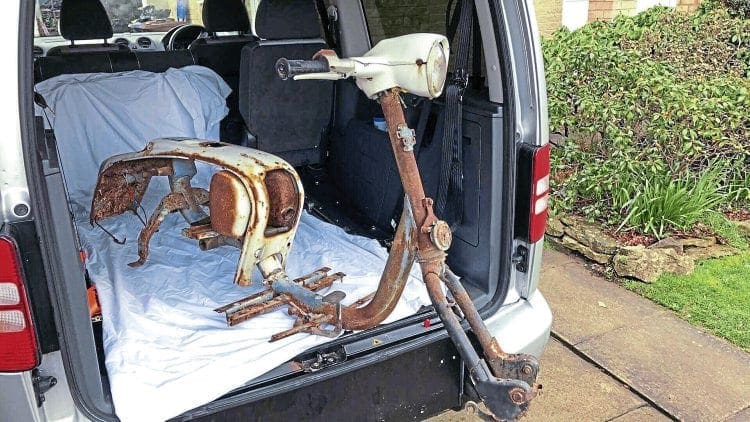 Occasionally I spend so much time getting involved with other people’s scooters that I neglect my own enjoyment of them. But with winter here, my mind was now focused on one thing: project street sleeper…

Why, oh why couldn’t I have been bitten by a bug which was, well, cheaper, less obsessive, cheaper, easier to find the time to enjoy and… did I say cheaper? Before I start any scooter project, there’s an inevitable ‘gestation period’ where I get a hankering for something, and then spend many evenings with a beer in hand, scouring the web, social media pages and eBay – looking for something to fill the scootering void. This tends to build over a period of weeks, until I have a stack of potential prospects in my sights, and inevitably after one beer too many… I commit to buying something, and wake up owning a new scooter (of sorts). This time however, all my endeavours have been carefully planned during daylight hours while sober, which makes a welcome change, and gives me a sense of certainty about where I’m heading with this.

Previously, I’ve fallen into the trap of making my scooters a bit too ‘precious’ with fancy paint jobs and blingy bits. But this time, I decided I wanted something which was ‘rough n’ ready’. Something I didn’t give a shit about if I bumped or scratched it, something I didn’t care about whether it was sparkling clean or not… just something to get on and ride. But, and there’s always a ‘but’, I couldn’t let the engine spec slide, though it has to match the look of the scooter, and be discreet. So while I may end up with a clubman exhaust, the engine should be ‘fruity’ to say the least, and the brakes, tyres and suspension should be ‘up to the job’. Ultimately, I think the only concession I will have to make on the external appearance, is that a front damper will be fitted to a scooter which didn’t come with front dampers, the tyres will inevitable look ‘more sporty’ and the front brake will have to be ‘uprated’. But outside of that, I want it to look discreet, sound bitchin’ and pull like a freight train.

So the starting point was a frame; it’s the obvious back-bone of the project. I looked across the web and everything I saw was either trash, or overpriced, or overpriced trash. There used to be a tonne of scooters, all in one place… Scooter Trader (www.scootertrader.com), and if not there then eBay. You could regularly find dozens of scooters and an abundance of frames on either of those places. But everyone seems to have fragmented their selling point now, and has spread across multiple Facebook groups. This makes searching for scooters (or frames) a proper pain now, and probably means sellers are limiting their audience, and not making easy sales.

While www.scootertrader.com is still full of UK based scooters for sale, it’s not full of frames… and it’s a frame I need. The pickings are getting slim my friend. So I had a thought: why not contact my old pals at Loco Wheels, and see if they can unearth a Spanish gem for me? And they did just that. Daniel and Thomas knew where there was ‘an old wreck’. They were happy to pick this up for me as a favour, and organise the shipping to the UK. I was delighted, and couldn’t thank them enough for their kindness. Not only do these guys run classic scooter tours across Mallorca, but they are ‘proper’ scooterists too, with a great classic scooter garage in Palma. If you need anything scooter related in Mallorca, these are the ‘go to’ guys. In fact, they often include a tour of their scooter repair garage as part of the ‘scooter experience’ (if you ask nicely).

Sadly, upon arrival, the frame was a bit more of ‘an old wreck’ than I had feared. The headset which I planned to use was cracked/snapped at the gear change side, and the frame was in a bad way. All struts and hangers were bent, the canopy looked off centre, the rear loop was kinked/crushed badly and held together with fibreglass, and the rear frame support bracket had snapped in half. But I couldn’t complain; these guys had organised this for me as a favour, and I was more than grateful for that. But what to do with the frame? Well, we all know there is no such thing as a frame beyond repair, but I was running out of time and needed to get this particular project moving. So because I have another ‘race based’ project in mind, I thought that perhaps this frame might suit a ‘cut-down’ idea I have, or maybe just a few repairs at a decent engineers, and thus it was sidelined for now, and will make a reappearance at a later date.

While all this was going on, and I pondered sending my Loco frame off to be repaired, I’d also been watching a couple of other scooters on the well-known and trusted site: www.lambrettafinder.com and had a couple of ‘prospects’ in mind. There is a lot of uncertainty still, from UK buyers, and unwillingness to buy from overseas. Some don’t trust the idea of an overseas purchase, others think the paperwork will be difficult or convoluted. I understand where these preconceptions come from, but the reality is far from this. I viewed Sam’s well stocked website, where he has images and descriptions, constantly updated, of all his Lambretta, Vespa stock (note: if there’s something you want, and you don’t see it, he might be able to find it).

One item jumped out from the rest, an Italian Li150, still in original (just the right amount of rust) paint, it was straight, and complete (except the engine). This was ideal for me, it was perfect in fact. So I was straight onto the contact section and messaged Sam, we did a deal and on his next trip to the UK he delivered the scooter to my front door. Sam is often in the

UK, many times per year in fact, he attends nearly all the major rallies, and also the trade fairs. He will try to coordinate to meet you there with any items you buy from him, or if you cannot get to the show, he will try his best to make a route around the UK, dropping off scooters like a Belgian Father Christmas! Each scooter comes complete with an invoice, showing the VAT registration details of Lambretta Finder, this is important so that you don’t get charged any import fee by HMRC.

So within 10 minutes of him driving off, I had been on the computer, registered the scooter on the HMRC website, and was issued with my NOVA number. This is a simple, very straightforward, and easy to navigate website, where you register any scooter (or frame) you import within 14 days of it arriving in the country, and HMRC issue you a NOVA number which is part of the registration process to obtain a V5 document (more on that later).

This frame and bodywork lived up to the images, it was exactly what I needed. It was straight, and complete (minus the engine). I dragged it happily into my man cave, my mind boggling at what to do next, and roughly speaking, this is the plan… remove bodywork for T-cut and polish, leave all paint ‘as is’ in original (battered) blue and white. New cables and loom, probably a set of bodywork rubbers, and then think about the engine, suspension, brakes, wheels and tyres. It’s gonna be good. Tune in next month for more updates.

ABOUT SAM AND LAMBRETTAFINDER – THE HISTORY!

Lambretta Finder’s Belgium-based owner, Sam, gained an interest in scooters at age of 17. He bought his first Vespa in 1993. Immediately ‘bitten by the bug’ he bought another to ‘strip and rebuild’ in a 10sq m shed in his mother’s back garden. In 1994 Sam bought his first Lambretta and restored it a year later. In the meantime he kept himself occupied doing maintenance for local scooter owners. Over the following years he started collecting scooters, financing them by restoring them for other people, buying and selling, and servicing.

In 2000 Sam moved to a bigger garage of 100sq m. By that time he had already built up a large collection of rare 60s Lambrettas, some Vespas and a lot of original accessories. In September 2002 his gorgeous Vespa GS MK1 was featured in Scootering magazine, and he continued to provide a mechanic and restorations service for others.

By 2004 he decided to quit his job and start making a living from scooters. LambrettaFinder was born! Sam started visiting Italy frequently to buy Lambrettas and Vespas and the business started to grow quickly. Soon the garage as well as the van and trailer were getting too small. At the end of 2006 Sam had the opportunity to buy a warehouse, only 2km from his house, on the main road of Rumst.

In spring 2007 he started organising the new 500sq m warehouse. There was enough space to restore and do mechanics, storage for new parts as well as second hand parts and a large office. There was a lot of space to store the stock of 50-70 Italian scooters for sale. Sam still drives to Italy every six weeks to pick up Vespas and Lambrettas.

In September 2011 he opened a new 230sq m showroom, at Molenbergstraat 94 Rumst, about 100m from the warehouse. Sam still takes care of mechanics and restorations in the warehouse and organises the stock of new parts.

In 2014 Sam wanted to buckle down to worldwide import and export and decided to run the office in the warehouse again. Mechanics and restorations are still done by Sam as often as possible. Fast forward to today, and the business has now expanded to trusted source of vintage scooters for many satisfied customers.