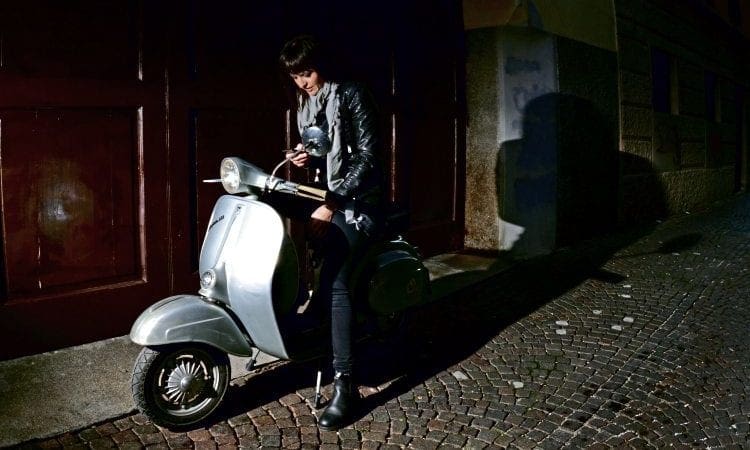 Italian law is incredibly strict when it comes to modified scooters — they are practically outlawed. Christian Giarrizzo met a woman who’s keeping her Vespa 125 original but for very personal reasons… 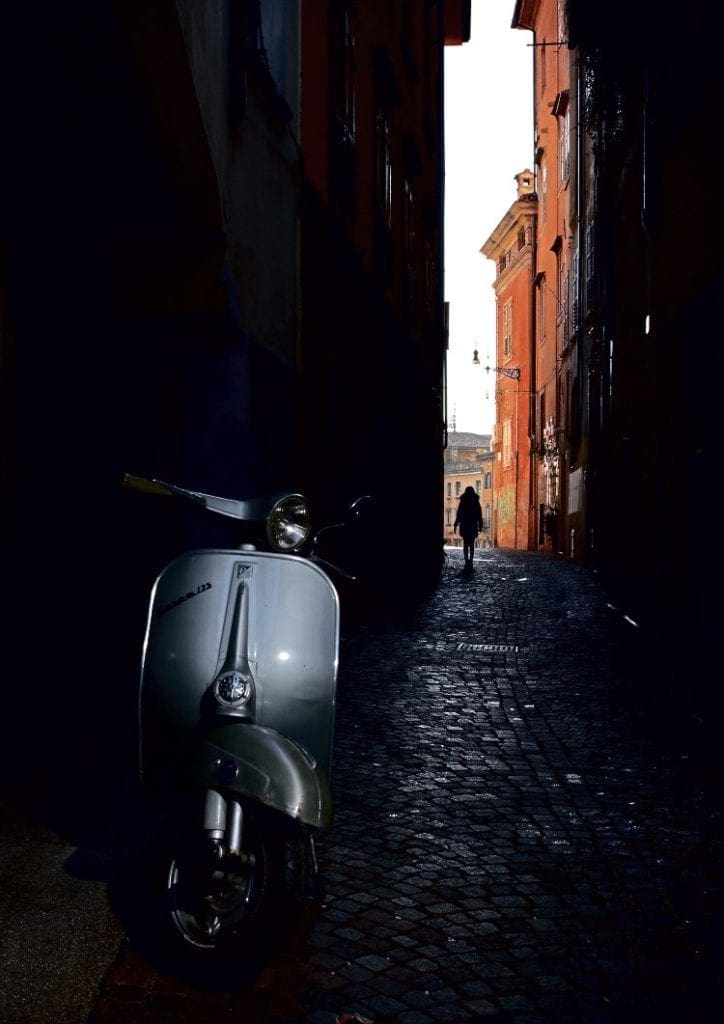 You can hear the same conversation on any Italian street: ‘Wow, you got a Vespa?’ ‘Yes, I finally bought it!’ But is it restored or preserved?’ Despite the common passion, curiosity and knowledge that unites Vespa riders of every nation, the Italian branch of the family has its own special peculiarities which set it apart from the others. If you go travelling, you will soon see how owners from other parts of Europe or overseas are dedicated to modifying and personalizing their scooters, infusing them with a temperament and character similar to their own.

Glaring from the pages of foreign magazines about Vespas or Lambrettas are outlandish colours and tales of fiery performance far removed from the machines’ original factory spec. Yet matters are very different in these scooters’ historic heartland.

The law of the Italian peninsula does not allow modified scooters to be ridden on the road. Sure, you can repaint your pride and joy but as soon as you start to modify the engine or the chassis the machine is outlawed immediately. This of course does not stop some hothead teens from tuning up engines — potentially incurring the wrath of the law and risking a seizure. In short then, the Vespa being discussed by our two conversationalists would almost certainly be an example that’s either been carefully restored following the original company spec, or one that’s been perfectly preserved from new. The latter is much rarer and that’s reflected in the ever-rising sale price of original and complete scooters. The Italian way might seem odd but there’s beauty in diversity and each nation’s ‘Vespisti’ are nurtured by their own native culture and must abide by the local rules of the road.

Phoenix from the ashes…

The Vespa 125 ‘Nuova’ belongs to the Sixties and if it could speak would tell of a different Italy, of trips to the beach, of carefree stylishly dressed youth and fires on the beach. But it might then also recall the huge social turmoil which followed and exploded into the Seventies. I found its owner drinking a coffee in the centre of Udine, a city that is home to me for six months of the year. Erica is a brunette of few words who does not hide her passion for leather jackets and mechanical technique – I couldn’t wait to interview her about it all.

“My father had bought her second-hand, she was already six years old, from the first part of Seventies,” she smiles. “At that time my parents were moving to a house in the country. Andrea – my father – had parked it in the garage next to two large empty wardrobes with their doors removed for transport. At 9pm of the same day, May 6, 1976, the Orcolat awoke.

“A dark force shook the ground and the old demon of the region shook everything violently. Magnitude 6.5. Houses made of stones were shaken apart and collapsed under such force. Sadly, my grandparents and my older brother remained under the rubble in that mountain house.” The Orcolat – according to the region’s folklore – is a monstrous being that causes the earthquakes in Friuli Venezia Giulia. It lives within the mountains of Carnia, its every movement abruptly causing an earthquake. Although my questions are dredging up sad memories from Erica’s past, her smile does not waver and the lyrics of a song by Vinicio Capossela emerge from my memory, loosely translated, it says: “If you have a demon name it, do not run away, do not deny it, if you have a devil name it, Baptize it and make it your godfather”. So what happened to the 125? When they cleared away the remains of the garage, under the rubble they found an overturned but intact wardrobe beneath which lay the Vespa. A heavy scratch and a tear in the legshields were the only damage to the vehicle.

“It was fate that the Vespa remained in our family evidently,” smiles Erica.

From 1420 to 1797, Udine was the fifth most important city of the republic of Venice. Even now, walking in the old town you may notice some architectural details which recall that time. Its small streets would seem to offer the ideal photographic setting for some shots of the scooter but Erica has something different in her mind: “You should not own such a nice piece of machinery and not know how to disassemble it!”

She brings me to her ‘shed’ and after having fixed her make up next to a tool case she shows me her skills as mechanic. She opens the Vespa and after checking the drive chain uses a hoist to lift the scooter with ease and place it over the counter. “Here is where I work, a small place of silence that allows me to perform routine or extraordinary maintenance of my little Dorian,” she says. 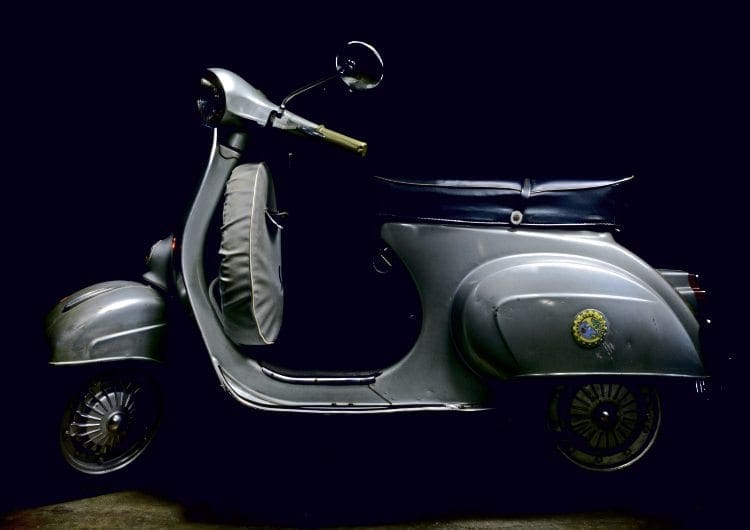 I wonder if there’s any particular reason for choosing that name. Maybe there’s some magical pact with a mysterious picture in your attic that will keep the scooter forever young. Erica? “I just liked the name,” she replies matter-of-factly, removing the spark plug and checking the colour. She has the same tenacity and concentration that I would see in a professional mechanic.

The fire of a wood stove warms the environment, which although small is organized down to the last millimetre and in that moment Erica amazes me again, beginning her personal analysis of Dorian. As she speaks, it is almost like listening to a Vespa sales agent at an official presentation in 1965; “While retaining 90% of the aesthetic characteristics of the old 50cc Vespas, now it has enough power to reach a reasonable speed and successfully tackle hill climbs. The 125 that was created in 1965 is based on the small shell initially conceived for the 50cc. The same body has, for the first time, the side shells welded to the main body. 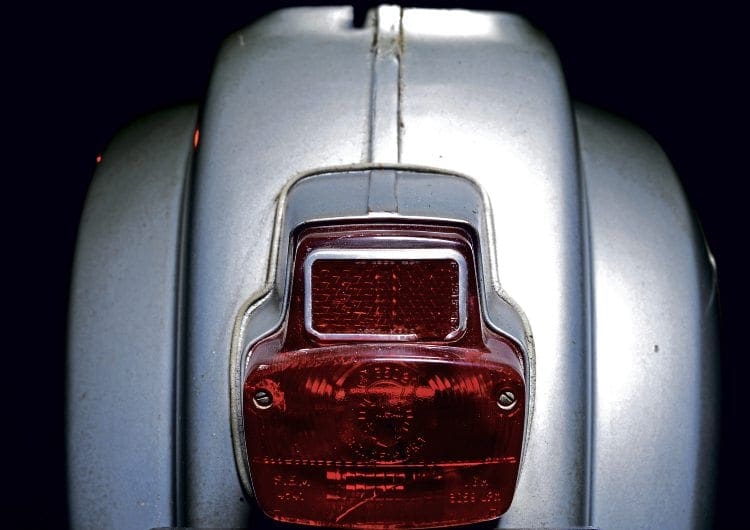 “Access to the engine is via a side door. Also new is the engine, which for the first time has the cylinder inclined 45° instead of being horizontal. The 10in wheels are also new and never seen on a 125 before then. The saddle is single or two-seater. The front suspension presents the coaxial shock absorber with the spring.

“The Vespa 125 Nuova, following its presentation to the public, was favourably received though it did not sell in large numbers. Produced in 1965 and replaced in 1967 by the more common and famous Primavera, it is mainly different from that only in having the glove box on inside the left wing. New also is the concept of the wheels, large in diameter, with the circle ring and brakes with alloy drum, equipped with cooling fins. The platform is well finished with aluminium strips and, at the centre, two stainless steel plates hold the rubber mat in place.

“With the front seat, almost everyone bought the long padded dual seat. Easy and always ready to start even after long periods of inactivity, the engine of the new 125 is robust and intolerant of even the most demanding efforts. The wide handlebars and the convenient location of the seat, put at ease even those less familiar with scooter driving. 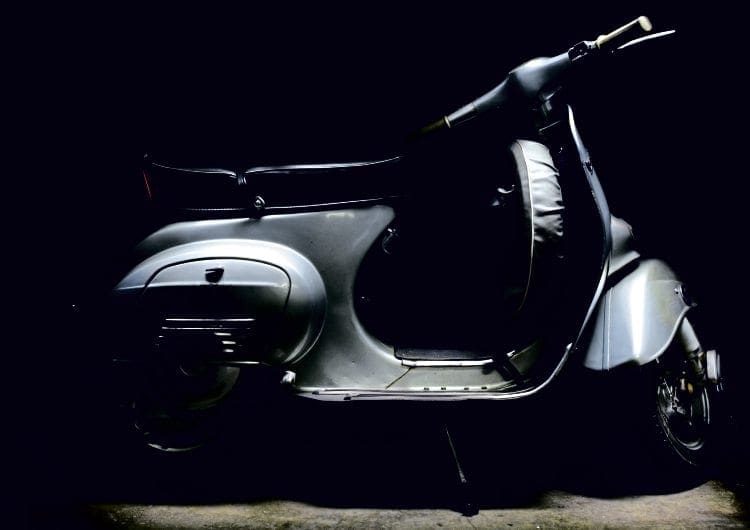 “Unfortunately, having two people on the Vespa 125 Nuova is not very comfortable because of the small size of the vehicle. The suspension, with double acting shock absorbers, greatly dampens the impact of potholes and bumps. The handlebars, much wider, allowed more control and the speedometer went all the way up to touch 100kph. The headlight, increased in diameter, improved visibility and the rear, with the brake light, was carried over from the 90cc. The saddle of the 125 Nuova, made by the company Aquila, was originally mounted on the handle for the passenger.

“The Nuova 125 (VMA1T) can be defined as the evolution of the Vespa 90 (V9A1) probably, produced in 1963. This model in fact has undergone major changes both aesthetic and functional: the chassis has the footrest much more pleasingly finished with aluminium and black rubber. The front fender has been enriched with a mirror polished aluminium crest too. 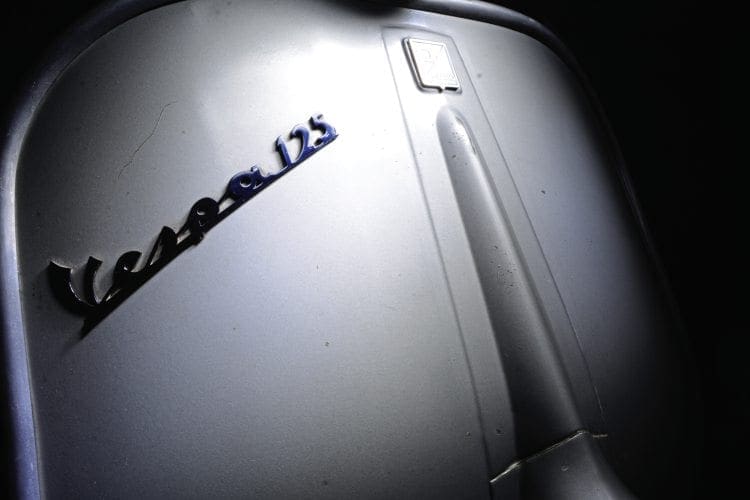 “Inspection of the engine is made easier with a new, larger side door than that used for the smaller engines (50cc and 90cc).

“It is an interesting model, not very popular so quite rare in the grand scheme of all things Vespa nowadays. It took the Primavera a few years to redeem the Vespa in the eyes of the public due to its brilliant handling. It became a huge success.”

I resurface from the reverie this cascade of information sent me into only when a wrench slips from Erica’s hands and falls to the ground. Listening to her is like being moved by the notes of a gentle song. Before we say goodbye I ask if she is planning to change or tune up her Vespa.

She replies: “This machine has survived an earthquake that devastated entire villages. Changing it would be like forgetting the loss of my brother and my grandparents, now it’s like if they are always travelling with me instead.”