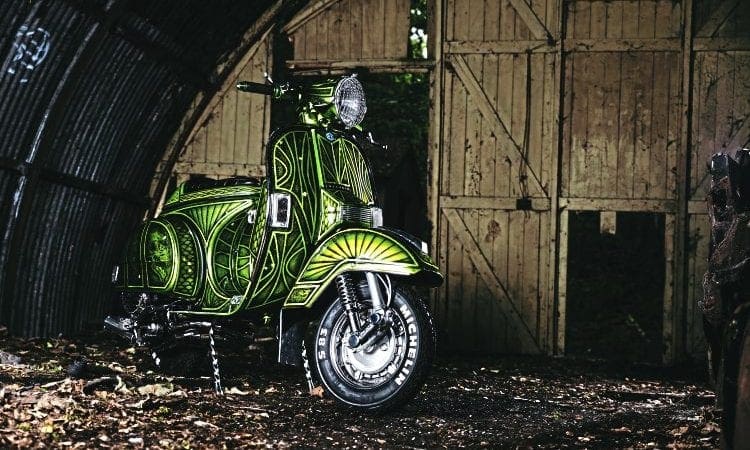 It’s always great to hear about young faces on the scootering scene. It’s inspiring; and in those moments when you sometime might wonder if anything refreshing will enter onto the scene people like Aaron Williams rock-up and deliver a blend of youth with an ‘Old Skool’ classic custom…

Aaron Williams first got into scooters when he was only 12 years old. “I first started to hear stories about my uncles back in the 80s who were all skinheads. They were in ‘oi’ bands and with their mates they used to annoy people on their scooters. Then, when I was about 14 I saw my Uncle Jason’s Lambretta, it was in Old English white, it didn’t have any mirrors and when I heard it fire-up I knew I wanted a scooter. However, at the time I couldn’t afford one because I spent most of my money on records.”

As Aaron’s interest in music developed, through his teenage years he moved towards the soul scene, which added to his interest in scooters. “When I was about 19 I would always see scooters at ‘weekenders’ and maybe the odd soul night. I loved looking at the paint work, but I leaned more towards the engineering side of things; I’d rather have a battered scooter but running like clockwork than some fancy thing that’s breaking down all the time!” Aaron laughed.

Bitten by the bug

Through the soul scene Aaron met his best mate, Stephen Cootes and started to go up to Scotland for more all-nighters. Steve had a Vespa PX125 and seeing Steve’s scooter gave Aaron the inspiration to start looking for his own machine. “I was now in full-time employment and I’d been able to start saving some cash. I wasn’t bothered what scooter I got as long as it was a Vespa; and when I got it I was going to take it apart and make it mine. I wanted to learn about every nut and bolt, how it ran, and also how to take it apart and fix it when the inevitable happened.”

In June 2017 Aaron’s search for a scooter proved fruitful and he purchased Old Skool Fool. “This is the original name of the scooter, which is a good representation of me in a way, so I decided to keep it. I also decided to keep the theme of the scooter as it’s full on 1980s goodness; I just needed to give it a whole lot of lovin’.”

The original paintwork was completed by Steve Brodie, the potential of the metal-flake and pin-striping was fantastic and the appearance of depth, which the paintwork could give was amazing. The ‘scale’ effect around the scooter gives a ‘reptile-like’ feeling and the skulls on the side panels add to a feeling of menace.

Aaron had seen the potential, he knew that the scooter was in need of some TLC, but he knew the basics were there. “In the process of restoring the paintwork I wanted to keep it as original as possible but enhance the looks of the scooter. I wanted to lift out the potential of the paintwork; take it to the next level and add some personal touches.”

Aaron’s a pragmatic individual and takes pride in what he does, so he sat down and created a plan outlining how he would develop Old Skool Fool, and achieve his other priority of personalising the scooter.

With this being Aaron’s first scooter, and bearing in mind the challenges which owning a machine that’s over 35 years old might bring I asked him how he set about the project. “The whole thing was dismantled and rebuilt, so it took me a while because every bit I took off I had to learn about in the Haynes Manual! The engine set-up was fairly straightforward, the scooter runs on a mainly standard engine with a 20mil carb and a Sterling expansion exhaust. However, the wiring was the main problem as it had to be completely stripped out, so to help me with this I sought the assistance of my fiancée’s uncle who knows a thing or two about scooters. After the engine work, suspension, wheels, brakes, clutch, gearing, carb, steering and re-cabling was finished I moved onto the paint. This was the hardest and scariest part for me because I didn’t want to mess it up. I wanted to get the maximum looks and effects, so I now had to think seriously about this phase, and how I was going to go about things if I was to achieve the best possible outcome.”

Aaron was adamant that he wanted to get the very best he could out of Steve Brodie’s original work. He started watching YouTube videos on wet-sanding and pin-striping and learned from others in the scootering community. To start the process, Aaron first got rid of all the orange peeling and bubble’s, which the paintwork had developed over the passage of time.

Once these areas had been taken care of he then filled in all the chips and dings, which had been revealed. After that process was complete, it came to the clear-coating stage and adding more glitter flake, which he did using a blend of initiative, daring and a wire mesh cake sieve!

Then, finally when all this was complete he started building up the layers of the clear-coat and carefully polishing in-between. “The job was time-consuming and I had to be careful every step of the way, but I think my hard work has paid off.” Aaron said.

Once he was happy with the overall finish it was time to add some personal touches to the scooter. Along with chrome wheel-trims, floor-runners, brake-levers, bumper and number plate border he added a lightly engraved flywheel cover, gear selector box cover, kick-start and twisted chrome stand, all of which make neat overall additions. One of my favourite additions is the skeleton on the head-set top. I asked Aaron what the meaning of it was. He laughed and said: “Stu, it’s probably the most useless part on the scooter. It’s utterly pointless, but it looks cool!” While we were talking about the additions Aaron went on to explain that he is now in the process of teaching himself how to engrave, and once he’s good enough, he intends to replace the existing chrome with his own engraved work, which will include detailed cobwebs and floral patterns.

Aaron started this project with little; or next to no scooter mechanical or paintwork knowledge. However, during the project he didn’t let his ego cloud his judgement, so he’s been able to keep an open mind, which has allowed him to be able to draw on the experience of others and develop the project in the way that he wanted it to go.

Looking at the now fully restored Old Skool Fool Aaron can be proud of the results he’s achieved. He’s risen to the challenge, and in the face of tough decisions he’s held his nerve, taken a step back and then moved forward,

“With a lot of advice and support from the scootering scene, online forums, Facebook, and family and friends, it’s taken me a year and a half to finish my scooter, but it’s mine and I couldn’t be happier with the way it’s turned out.”

With all this in mind, as well as what Aaron has planned for the future; the sky could be the limit…

Name: Aaron Williams
Job: Builders’ merchants.
Scooter club & town: Oswestry — Oswestry area scooterists.
How and when did you first become interested in scooters: Since I was 12 years old; when I first started to hear stories about my uncles back in 80s who were all skinheads.
What is your favourite scooter model: Vespa PX (but have a soft-spot for smallframes).
What is your favourite style of custom scooter: 1980s glitter flake and mural madness!!
Any stories: My mate accidentally took a wrong turn onto the motorway once on his Malossi 166. He video called me the next day with a piston in his hand, which looked like a melted coke can but he is still adamant this never happened (I often remind him!).
Favourite rally: Kelso for sure, you can’t beat the Scottish; never been to a bad rally.

Funniest experience with a scooter: Seeing our mate Jasna on the back of Stephen’s scooter for the first time at a rally. She was bricking it and took some persuading to get on; ha-ha, the next thing you see is Stephen blasting off on full-throttle skidding on the grass and Jasna absolutely screaming her head off for half a mile. She looked like a ghost when they got back!
What do you like about rallies: The happiness you see in people when they are just being themselves and the buzz of the place; it’s just great!
What do you dislike about rallies: The rain.
Your favourite custom/featured scooter of all time: Don’t know if it was ever featured but my all-time favourite scooter is ‘Lycanthrope’ everything about it screams 1980s. The engraving is impeccable and the paint job is nuts; plus it’s a chop-style with a top tank and finishing it off with pike nuts and glitter flake it’s perfect.
If you had to recommend one scooter part or item of riding kit what would it be: Tactical army gloves from eBay, they’re proper comfy and keep your hands warm.
What’s the most useless part you’ve ever bought for one of your scooters: Look at the headlight; and see that little skeleton on top? It’s utterly pointless but looks cool!

Name of scooter & reason: ‘Old Skool Fool’, this is the original name of the scooter, which is a good representation of me in a way so I decided to keep it!
Scooter model: Vespa PX125 1982 – Douglas.
Inspiration for project and theme: Just to bring it back to its former glory and the theme is 1980s glitter.
Time to build & by who: Rebuilt by me and some help with the electrics from my fiancée’s uncle David.
Is the scooter reliable: Yes, very (jinxed myself now!).
Paintwork & murals done by: Steve Brodie.
Is there any engraving: Light engraving to the flywheel cover and selector box.

Do you have any advice or tech tips for anyone starting a project: Learn the theory behind anything before you apply it to anything; saves a lot of cock-ups.
Is there anything still to add to the scoot: My own engraving work.
In hindsight, is there anything you would have done differently: Not a sausage.
Is there anyone you wish to thank: All my friends and family especially my fiancée Lydia for listening to me talk scooter parts for the past year. My best pal, Stephen Cootes and his fiancée Laura West for getting us to the scooter rallies and back. Also my mate, David for the electrical work and years of knowledge.