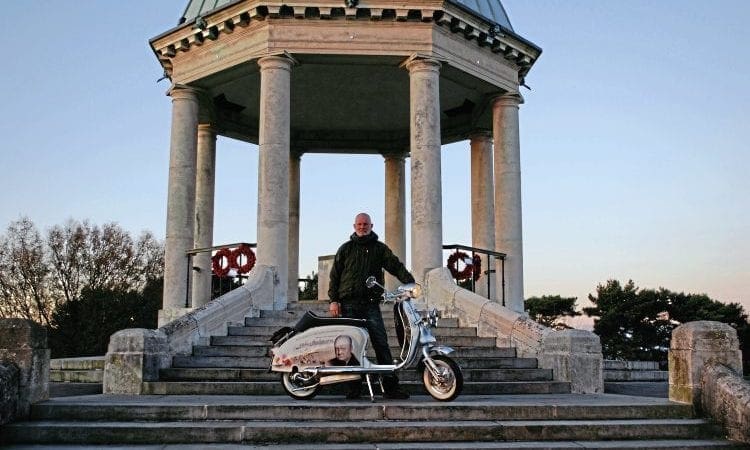 Richard Baller, owner of a small construction business in Sutton Coldfield, is the proud owner of this lovely Lambretta. When he saw it in 2015 it was now or never, so he took the plunge and purchased his much dreamed-of Series 2.

Since its purchase in 2015, the scooter’s has had a complete engine rebuild by Mike Phoenix in Manchester. Mike fitted a Mugello 200 kit, new exhaust, race crank, tubeless SIP rims, and whitewall tyres. It was well worth the journey on a cold Saturday morning at 5am to get to Mike for 7.30am, says Richard.

He told us: “We had about four cups of tea and Mike smoked about 20 cigs while he went through all the options. In the end I went with everything Mike advised, which turned out to be the right decision. He told me clearly and explained why it wasn’t worth just sticking on a kit without the necessary upgrades of the other components to keep in line with the upgrade. I’ve changed the two single seats for a Casa Ancillotti sports seat, much to the disappointment of the missus.

“Not as comfy and not as much room when she gets treated to a short run out on the odd Sunday afternoon, but it looks better (much more important). I’ve changed the front mudguard for a sports style one. This creates a divide in opinion with the lads I ride out with; it’s about 50/50 for and against.”

Richard stripped back the horncasting and headset in his garage with a wire wheel in a drill and loads of elbow grease, ready for respray. This job took him into the early hours of a Friday night (the things we do nowadays to stay out of the pub). The components suited the stripped back look, so he cancelled the spray job and instead polished them with pledge!

Then onto the airbrushing. Rick told us: “I’ve always liked the individuality of custom artwork on scooters and have always been very patriotic, very proud to be British and hold a lot of admiration for our armed forces, past and present, and always had an interest in both world wars.”

In April, while talking to a pal Paul Spooner at footy training — my lad Charlie plays for Boldmere St Mikes with his lad Max — they were talking about his military time, etc. then about the Lambretta and how he would love one day to have some kind of artwork. Paul’s eyes lit up, he said: ‘I know just the man, my friend Darren Hubbard (www.subzart)’.

Rich continued: “I got in touch with him and told him of my ideas; we instantly clicked and he agreed to help me with the whole setup from design to completion; the theme really appealed to him. For the following six months, we fired ideas and images across to one another, until he finally fired up the air brush.

After about a week had passed, he sent me over some images to see if I was pleased with the first stage and would I like to make any changes. I couldn’t believe what I was seeing; it was above all my expectations, so I told him he had a free rein and to crack on as he pleased.”
As time went by, Rich tried to be patient and not ask for another peek before it was complete, and Darren kept him updated with images. Finished with five coats of lacquer on November 4, they were done in time for Remembrance Day (more to come on that later).

“I picked the panels up from Darren on Wednesday, November 8; I couldn’t thank him enough. To think that he does this as a hobby, as he explained at the beginning of the project. He does it in his spare time because he enjoys it, not because he has to. He has his own air-con business which obviously takes up most of his time plus he has a young family. I saw it as he was doing me the favour and I needed to be patient, even though the skelly scoot cracks were wearing a bit thin after doing runouts in London, Brighton, Worcester, Oxford and a few others throughout the summer panel-less. It was more than worth the wait.”

So Rich arranged with one of his local ride out crew, of which there’s about a dozen including best friends and cousins, to meet for brekkie at 9.30am sharp, and then head off to Alrewas War Memorial to pay their respects and take some pics. Rich’s pal had just picked up his fully refurbed top to bottom, Series 2, so a proud day for both new owners.

Unfortunately all did not go to plan. Rich explained: “Some plonker decided to stay on an island after indicating to leave it and caused Rich to stall; so we pulled onto a big grass verge to reboot but immediately drew attention from passers-by, one being an old friend of both of ours who pulled over for a chat, a local chap walking past, but best of all an old veteran in full uniform pulled up in his car and came over for a chat; unbelievable. It turned into an impromptu social at the side of the road but by the time they had done their chatting and then farewells, they were running out of time and were due back home in an hour for family duties! Without enough time to get to Alrewas, Rich separated from the team and headed to his local war memorial in Barr Beacon, Walsall, where he met my daughter Jess and we both took a few pics.

Rich explained: “My dad had a Lambretta in the early 60s. I still have a pic of my mum getting on it at a holiday camp. He would tell me stories about his band and how he got to gigs on his scoot. This in hindsight is probably what triggered my interest in scooters. When I was a Mod, aged 12, in my fishtail and loafers, mum got me from Nelson House, which was in a subway in Birmingham city centre. I was on my way to meet my mates when a local Mod call Ray (funny how I remember his name from nearly 40 years ago but nowadays can’t remember people’s names who I met yesterday), pulled up alongside and offered me a lift up the hill to meet them. I couldn’t believe it, I thought I was the bee’s knees pulling up on the back of his Series 2 Lammy and promised myself one day I’d get one. I didn’t realise it would take me so long though, but like I said earlier, sometimes it’s worth the wait for certain things in life.”

Since owning the scooter, Rich has made some fantastic new friendships and rekindled some very special ones with cousins and old pals, to name but a few: Sutton Coldfield FunRunners, Wig commander (Dave), Secretary Mark, Richy B and part time member Sharon the missus, Tony, Richy G, Ginger Neil, Chambo, Gaz (cousin), Tammy Neil (cousin) Tammy, Matt and Jan, Mick the Mod, Worcester Neil, and buddies since we were four… Barmy George.
SC