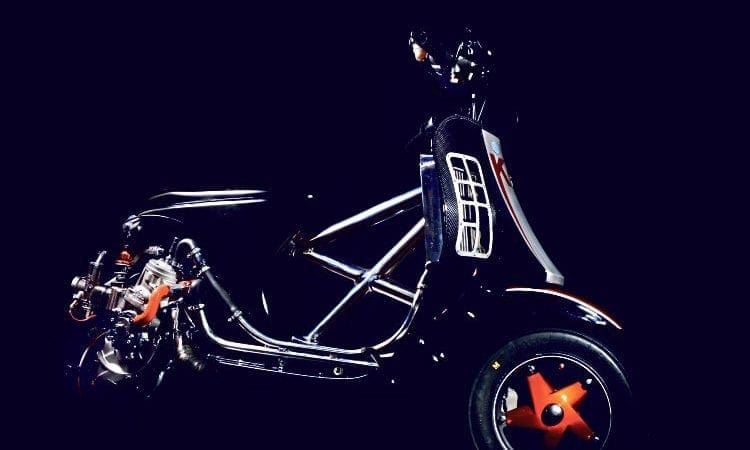 Despite its clear sprint-race design, this monster has a Jekyll & Hyde power delivery, first lulling you into a gentle sense of security…before ripping like a wild animal. Check out the Moto Mekanic Vespa… 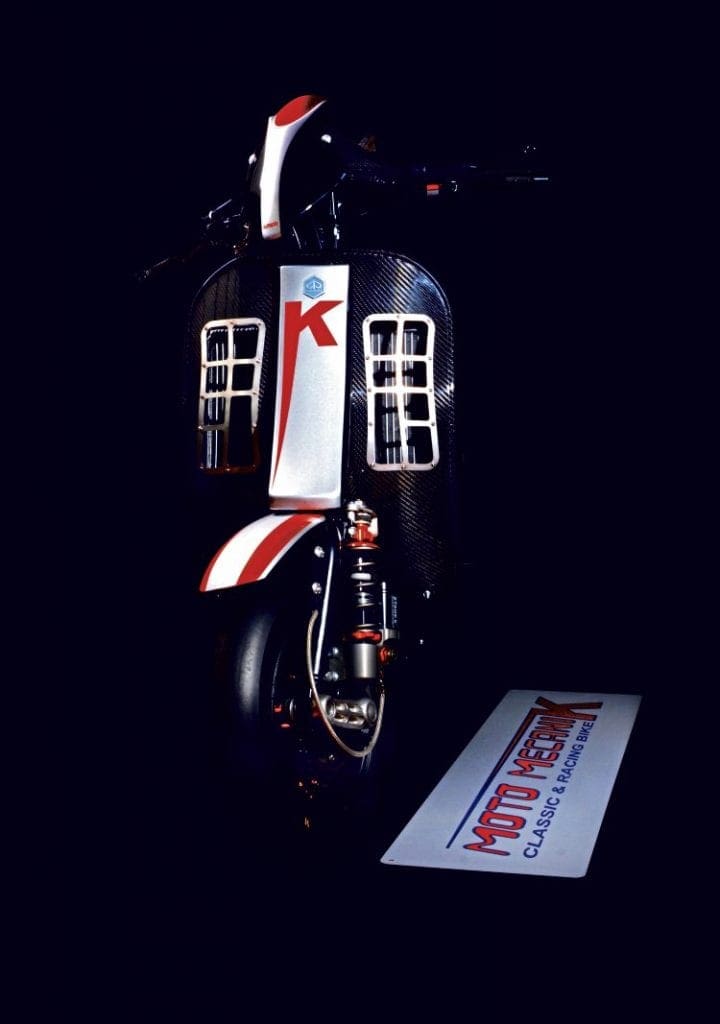 Vespas are scooters which are immersed in everyday Italian life as well as being a basis for Italian culture. They are intended to stop at every junction, commute through traffic, and all the while flaunt their stylish lines. But on the other hand, there are machines such as the V54MMk16 which seem tailor-made for the life of the scooter bandit! Part original Vespa, part wild animal and painted black. It is a Vespa, that when used in city traffic, would be like trying to raise a tiger in a small Italian apartment. It is a scooter which could allow bandits to escape in a matter of seconds from the scene of any crime if such a utopian underworld existed. In short, the V54MMk16 is a beast. 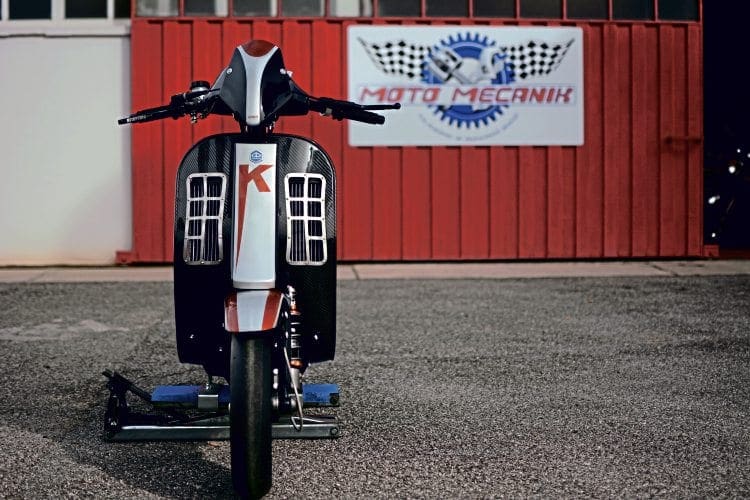 This creation comes from Cristian, a mild-mannered mechanic based in the Friuli-Venezia Giulia region in the province of Udine, northeastern Italy. Cristian has fused a Vespa 50-Special with the top end assembly of a FALC-made Honda 125GP kit, using a bespoke pipe, PVL ignition and Dellorto race carb. On paper it is a fierce character, a true Jekyll and Hyde, pleasant yet psychotic, especially when coaxed into life upwards of 10,000rpm via the throttle. Thankfully the Stage 6 brakes, suspension and alloy-trellis brace help to keep it in shape… as best they can! 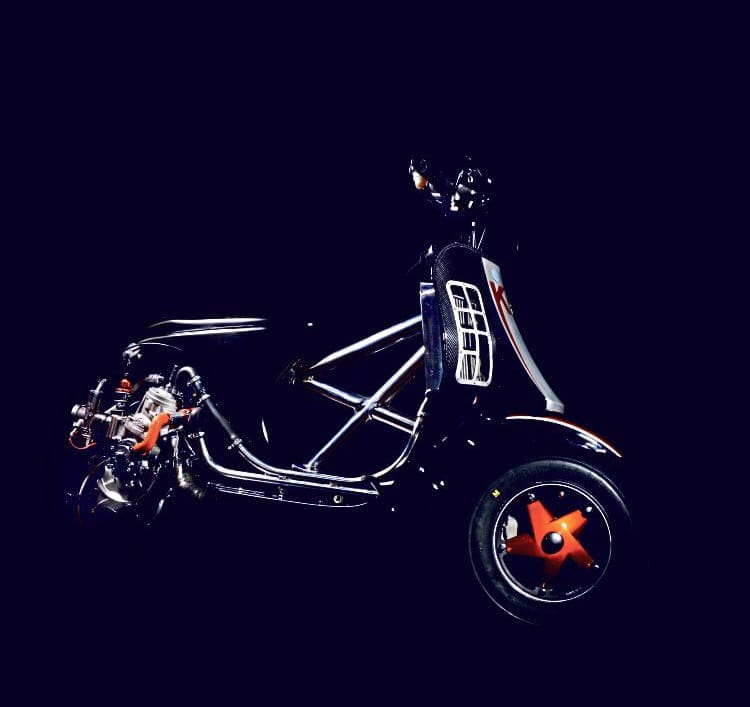 Cristian is very reserved, typical of the people from the Friuli region who are known throughout Italy for their cold Nordic ways. A perfect example which captures the essence of the Friulianos people is the memory of the earthquake of 1976, a disaster which devastated the entire region and brought everyone to their knees. From the farmers to the white-collar workers, everyone was affected by this natural disaster. The drama of that fateful day was there for the whole world to see. For the first lime, the tenacity and courage of the Friulianos was front and centre. Crisitian’s great-aunt remembers two days after the terrain was devastated, hoards of people rolled up their sleeves, digging with their bare hands and taking control of rescue efforts before any aid had arrived. 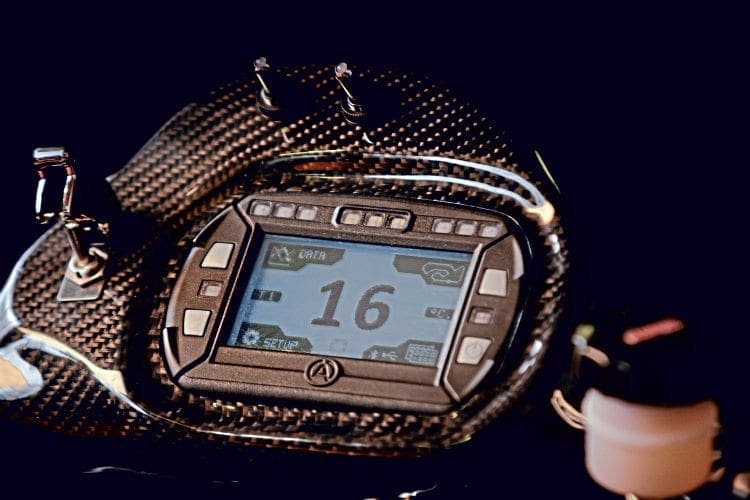 The sense of duty of the locals was recognized at an international level and even today people speak of it with a great zeal. Cristian is a true Friuliano who belongs to this land and with the same dedication that distinguishes these people, he has transformed a great passion of all thing motors into a career. His enthusiasm for motorcycle and scooter engines is shared across this region just like the cricket is adored in India and Cristian is at the top of his game. The Friulianos are passionate about motorsports too. The Friuli region famously hosts three international rally events per year and the crowds consist of entire local families who move trackside for a few days, armed with their picnic chairs and portable barbecues. 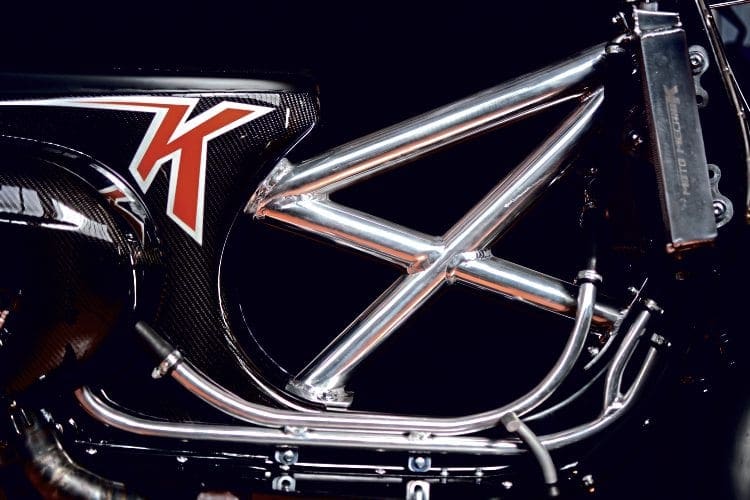 They line the woods of the special-stages and dot the hairpin bends to witness some sideways action. The Friulianos with their reserved personalities keep to themselves during rally events and consider tourists to be a disturbance in their prized lands. Voted by The Lonely Planet Guide the best destination for 2016, its vast pine forests and pastures hide the triumphs of the everyday heroes. Moto Mekanic could be considered one of those triumphs. It is where Cristian creates art from Vespas. The workshop reflects a passion and history of the Friulianos spirit. 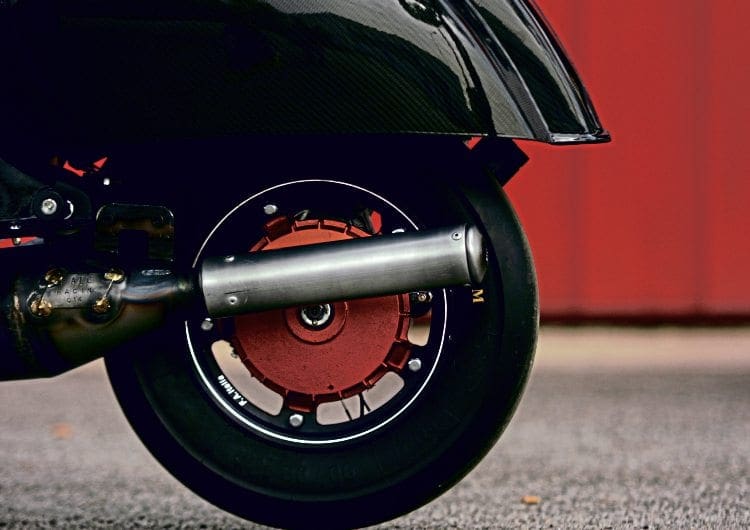 It is morning when I arrive at the workshop, tucked in an industrial estate along the Via Del Christi) in the town of Manzano, and Cristian is busy welding an aluminium frame. Bright blue flashes of light ignite from the welding bay as if Nikola Testa was inside trying to trap lightning from the skies as he did so many years ago. It is Saturday, which means half a day of work, less chaos and the chance for Cristian to tend to those jobs that require greater concentration and precision, like the V54MMk16. Clean work benches, the unmistakable smell of brand new tyres mixed with the scent of oil and metal reminds me of a time when I was head of a Lamborghini mechanical workshop and I used to schedule the important work on Saturday shifts to help clear my mind. 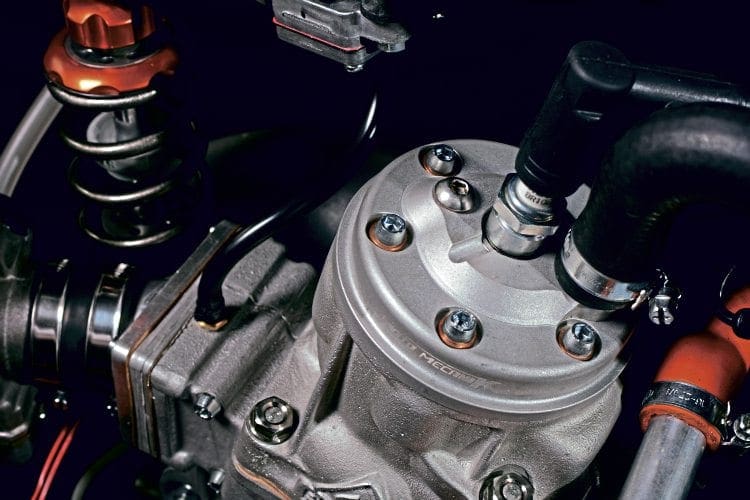 Cristian greets me with a firm handshake and invites me into his kingdom, Vespa kingdom. Half a dozen Vespas grace the floor and their colours are captured in a myriad of reflections from the window light. In the opposite corner, protected by silence in a tidy room, a colleague is testing the electrical integrity of another Vespa. The workshop is well laid out but I am here to see the V54MMk16, a dark beauty with a feisty soul. It’s not long before we plunge into the heart of the building and it is there that I see ‘her’ for the first time — the V54MMk16. 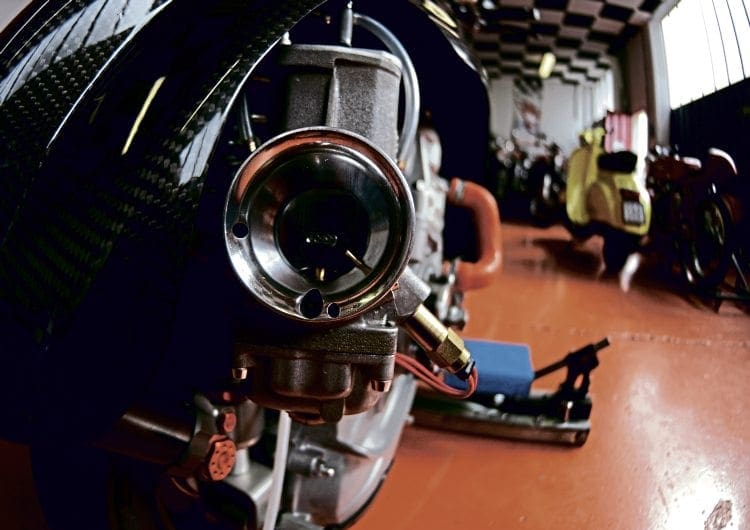 It is a beautiful scooter, born from a classic design, and brought to life again with modern craftsmanship. The first thing that grabs my attention though is the contrast between the black bodywork and the glitter of chrome. It’s an element that stands out even more when we lead V54MMk16 out in the warm Italian sunlight. There is carbon fibre, stainless steel, anodizing and layers of black. An apprentice has been preparing ‘her’ for our ‘date’. First the introduction, then interview and then the photo shoot. I feel warm and fuzzy and I cannot wait to hear this machine scream at 12,000rpm, as its rear wheel bites into the asphalt of a test road. 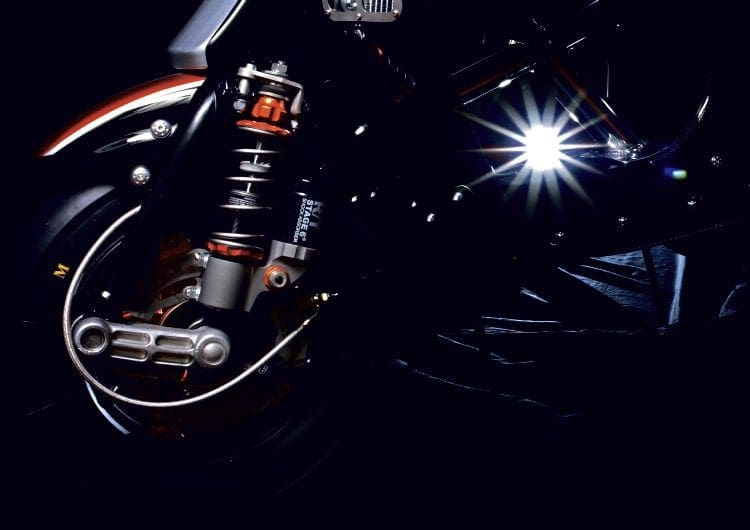 “The idea all started when I saw a race in Precenicco, Udine,” Cristian laments with his calm persona. The modern trend these days is to go stronger and further with a bigger engine, to design a tubular frame around a completely new motor and then incorporate the classic form of a Vespa body. This was not the case for the V54MMk16. Cristian wanted to try to put everything he needed within a Vespa 50-Special engine casing, leaving the main frame and body standard. The result? Another Italian masterpiece! A cylinder, piston and head of a Honda 125GP coupled to the agile, small block ‘Piaggio small frame special’. It took more than 30 hours of milling (thanks to Massimo Bignulin by Otramas) in order to enable the entire fat modification to stay inside the housing with the perfect tolerances and axis.

It took almost two years (or 280 man-hours) for the overall project to be completed, incorporating design, test and manufacture. Cristian speaks with great pride about his creation even though he is a man of few words. He looks over his creation with pleasure and as someone who knows the reason why each design technique was adopted. “The small frame Vespa has a weak point,” he says. “The shift pin fails, and oil struggles to reach sections of the gearbox. We decided to replace the entire mechanism with a new bearing system, which I created. In this way, we have eliminated the play of the traditional system and the gearbox has become extremely precise. First gear pulls long up to redline while the remaining gears are set up for short shift and quick changes.”

The more I observe the V54MMk16 the more I realise how the team at Moto Mekanic have devoted their time to the finer details. From the joins in the chassis to the crafted radiators, the trailing exhaust pipes and even the head bolts these have been made and decorated by hand. The instrumentation is also custom made for this project along with other aesthetic components by local artist Nicola Tuniz (NAKA Design). It is another striking element of beautiful handmade design. Each element positioned on the handlebar can be adjusted according to the height and the preferences of the rider. In race mode, the pilot can change the engine mapping in real time, while having the ability to read the vital information including water and exhaust temperature. 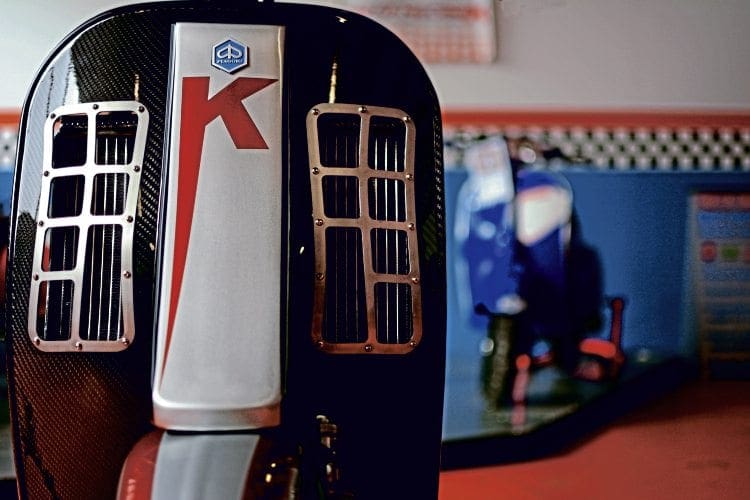 After our introduction, I am yearning to hear the V54MMk16 Vespa in motion. When it’s fired up the sweet sound is full with a defining note. On acceleration the crisp bark reminds me again of Tesla’s lightning — a bolt from the past. I point in wonder at the three different coloured gear shift indicators. Cristian answers, yelling at me to beat the noise: “White is for 4000rpm, green for 10,000rpm and red for 14,000rpm.” While I am processing the shift light numbers, some locals from the nearby houses arrive with their smartphones at the ready in video mode, drawn in by the symphony that is the bellowing from the hand-crafted V54MMk16. Cristian adjusts the latex glove on his right hand and gestures to me, “The next time you come to visit us you will see her on the track. But I want to dedicate a few months to tuning and set up.”

What my eyes have seen is already enough to imagine the potential of V54MMk16. In a short stretch of private road, which skirts the workshop, Cristian launches through the gears. The front axle floats at waist height with each twist of the throttle. In my excitement I quip to the other Moto Mekanics: “This machine has so much bloody torque it will rip your arms off.” In true Friulianos, their response is subtle, but their wry grins agree with my sentiments. The lasting impression I have as I leave the workshop is a feeling of wonder and amazement. Like the boy who has witnessed their first road going Ferrari or Ducati. I too have seen a sight to behold, a rocket encased in one of Vespa’s classics. One thing is for certain, the Moto Mekanic team have transformed a classic city commuter into a bandit of the road. Once the testing is complete it will be time to look for trouble on the streets of Friuli.