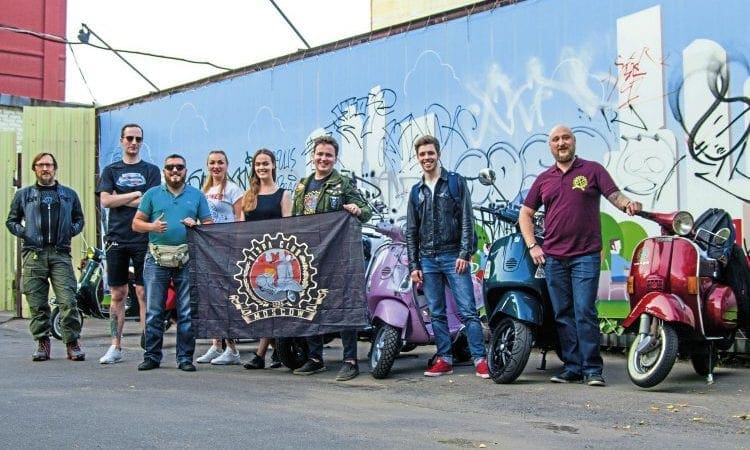 Stung by a wasp, the great bear awakens..

During my trip to Russia, I went to meet up with the Vespa Club of Moscow. Scooters weren’t really popular in the Soviet era and it’s only now they are developing a scootering ‘culture’. Still, considering their scooter scene is in its relative infancy, this club is thriving!

The head of the club (No.1) is Alexander Sidorov; he established it in 2004 having tried to kick start the scene in Moscow by buying 10 vintage Vespas to sell on in the city. Alexander’s pedigree began back in 1999 when he bought his first Vespa PX80 for $600 (£450). Yes, PX80 — that’s not a typo — they were available in Holland too, as far as I’m aware. Alexander bought it off a bloke who had brought it in to Russia and decided he didn’t want it because it wasn’t an automatic. Consequently Alexander bought it without the full documentation, which is a very hairy thing to do in Russia, trust me on that one. He’d borrowed the money to buy it and for four years he was the only soul in Moscow to be toddling about on a PX. After four years he decided that being the only one scooter-boy in Moscow wasn’t the best idea and that he’d start a club.

So he borrowed some more money, visited Germany and bought 10 scooters. All told it cost him $20,000 to bring all 10 back, with all the customs and what have you. He only managed to sell five initially, and it took him years to pay back the other $10,000 — sales got better when the club started riding out and more interest in scootering was shown, which all helped. Then a few scooter dealers set up in Russia… Italian, Vespa, some Japanese and the like, though Alexander isn’t too keen at all on the latter.

Alexander counts 2005 as the official start of the Vespa Club of Moscow. It began with the 10 scooters and them all meeting up and having ride outs. In 13 years it has grown and now there are around 100 members of the club. At one time it was over 100, but then some dropped out, some with bikes, some with family commitments, the usual story we are all too familiar with. The current and really active members are about 30 strong, these can be relied upon to turn up to nearly every meeting, show or event.

The majority of the club are ‘modern’ Vespa, but there are some classics, ET3, PX and even the odd Lamby knocking about. Alexander told me a story that underlined the scarcity of originally registered Lambrettas. A friend found a Lambretta in Moscow and it turned out that this one had been the first Lambretta in the Soviet Union; it was for an exhibition in the 1950s… I think it was an LD. It was still in exhibition condition. He bought it for $2000 (£1500) and it was almost perfect. The guy who sold it told us about the possibility of three or four more Lambrettas — documented on the exhibition papers, so we’re trying to track them down through the phone numbers on the old papers. Alexander explained about his club: “We don’t describe rallies as rallies, we call them runs — the main one being Victory Day (May 9, celebrating the victory over the Nazi regime). We do a few in the summer, but that varies from year to year and just who is left to organise it. The season is four months tops, the weather in Russia is great in the summer, but very brief… every year the most active members of the club go to Vespa World Rallies on their scooters.

“I got into the scooters through the music of British subcultures, the Mods, skins and psychobilly bands, Mod revival bands and Russian bands that do Mod nights in Moscow now. Some of the members are into the scooters and that’s it, others like the whole scene and its heritage. It’s mainly Vespa in our club, there’s about three Lambrettas, some LMLs and some Chetaks, all types of scooter are welcome… within reason. Near Moscow there is a museum for old Russian scooters, Tula, Electron, Vyatka.”

What impresses me most about the Russian clubs is their commitment and the distances that they are willing to do. Imagine this: we think that schlepping down to the Isle of Wight is a grind at times, but it’s double that distance just between the two major cities of St Petersburg and Moscow.

Then there’s Moscow itself: Greater London (all the areas) is 606 square miles, Moscow… 1758 square miles. Blimey. One lad travels in on his Vespa 40km each way every week to be in his ‘local’ club. The scene itself is generally younger in Moscow, which is no bad thing and they have a great blend of ardent ‘traditionalists’ who are heavily into the Mod thing. Moscow itself has a vibrant Mod scene, headed up by a guy nicknamed ‘Mobkid’, naturally there are skins, ‘Billies and the general mix we get over here, and like over here, they are obsessed with their scoots. I’m going back again to report more in-depth into the scene of the club and of the ‘retro scooters club’ that exists there too. I shall report, Bond-like, back to ‘M’ (or should that be ‘D’ for Dan?).

Yours with an incredibly decent vodka Martini, Agent R.

Words & Photographs: Rik, Lana, and the Vespa Club of Moscow