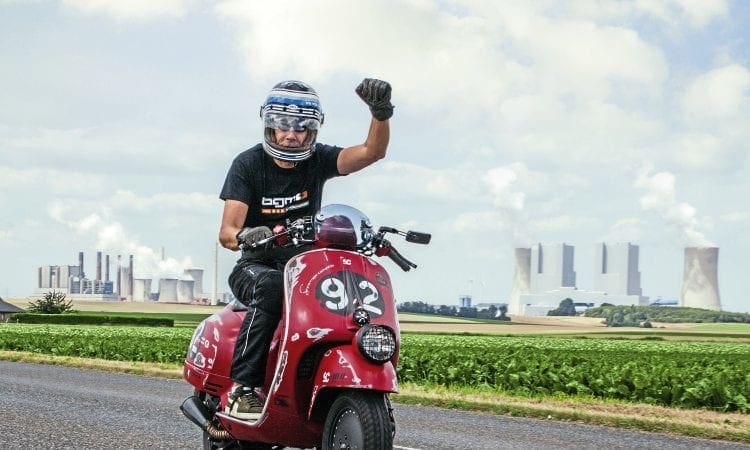 When Piaggio revealed their Sei Giorni in 2016, some saw it as a marketing ploy to sell more GTVs; others felt it was a worthy tribute to the legendary 1950s racer but for Scooter Center’s Alex Stroh and Frank Winkel it didn’t go far enough. “We wanted to create something that was a combination of both modern and classic Vespas,” explained Alex. Having secured an accident-damaged GTV the pair set about transforming their ideas into reality.

Foaming at the mouth

After studying the original 1950s Sei Giorni, the pair realised that the original’s distinctive features were increased fuel capacity and improved streamlining. The question was how to incorporate these into the project. Lacking the ‘clay room’ facilities of a major motor design house, Alex and Frank resorted to the next best thing, builder’s foam! After several days of carving, sanding and filing they were finally happy with the outline. At this point the services of Mathias Laubsch of Blechwerk in Neuss were secured to turn foam into metal. “Mathias specialises in fabricating bodywork for both custom and classic vehicles and his efforts on this build have been superb,” said Frank. “Even though it’s only a dummy, the new ‘tank’ completely transforms the auto’s rear end appearance. I genuinely think it looks like an evolution of the original, an effect enhanced by the small rear light.”

The fitment of bar end indicators made it possible to plate over the original indicator mounts, tidying up the GTV’s front end considerably. The effect emphasises its already streamlined design but it’s the new horn cover which is the icing on the cake. “The leg-shield mounted horn is a very distinctive feature of the old Vespas,” explained Alex, “We recreated that by welding in the cover from a VNA-VNB.”

After spending so much effort achieving the perfect profile, it’s unsurprising that the paint scheme was also well planned. Due to the use of plastic, achieving a convincing patinated effect on a modern scooter, even a PX, is difficult to achieve. Although the GTS has a metal body there are some large areas of plastic, notably the floorboards. In order to achieve a ‘bare metal’ effect these, together with a few other select components, were dispatched for a coat of plastic chrome before being carefully flatted back ready for painting. “In the 1950s a red primer coat was often used so that was the first layer to be applied,” said Frank. “This was followed by a coat of grey primer and finally a top coat in the same shade of red that was used by the early factory produced racers.” Once the sign-writer had completed his work the whole machine was attacked with a mixture of files and sandpaper to give it a suitably well-worn appearance.

Devil in the detail

With any well-executed build it’s often the more subtle touches that complete the overall effect. The standard handlebars have been replaced with a set of ‘m’ shaped drops by tubular specialists Fehling, who incidentally also produce a range of bespoke pannier mounts for the GTS range. Finally the seat is a one-off produced by Holger at Sitzbankdoktor. The seat leather’s patination was achieved by Holger sacrificing his leather jacket to the project!

Attend any rally and in the car park there’ll be an array of standard GTSs. Travel back a few decades and the space they now occupy was filled with P2s, Rallys or even GSs, all of which were regarded by their owners pretty much as the GTS is today. It’s difficult to imagine how the GTS will be regarded in 40 years’ time but Scooter Center’s Sei Giorni may just provide a glimpse of the future.