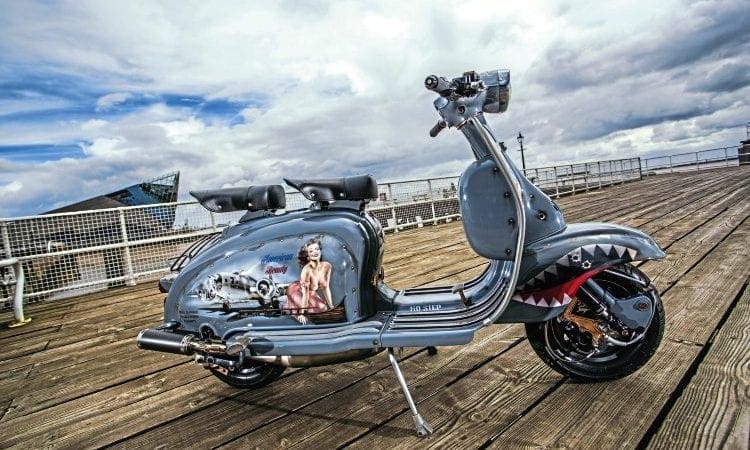 War Bird is the creation of Karl Russell, co-owner of Quality Chrome. Just one question Karl: where’s the chrome? Let’s start at the beginning. Karl is a serial scooter builder and typically finishes one or two bikes a year. Not all are custom machines, but he has been involved in some beautifully executed projects over the years. These include the late 1980s show stealer, Levi Stubbs Tears. After a gap in ownership of several years Karl has recently reacquired the scooter, which he often rides to work. Clearly this isn’t an ideal arrangement and is where a solid, but uninspiring, Series 2 LI 150 enters our story.

“I bought the base machine from Scooter Emporium, who had imported it direct from Italy. My intention was to build a runabout for the business, you know the sort of thing: traditional sign written panels, the type of scooter businesses would have used in the 60s. I knew I wanted it to be grey so stripped it down and sent it off to KB Paint in Hull. Kenny does a great job there and the base coat was first rate.”

Karl isn’t one to outsource work when he can do things himself and while the paint was being applied he set about building the engine, in fact the whole bike is self-built. There are of course some tasks that are beyond the home workshop and although the casing is still the one that Mr Innocenti fitted back in 1960, Paul at Oiltek in Barnsley has reworked the block so that Karl could fit a TS1 225 top end. 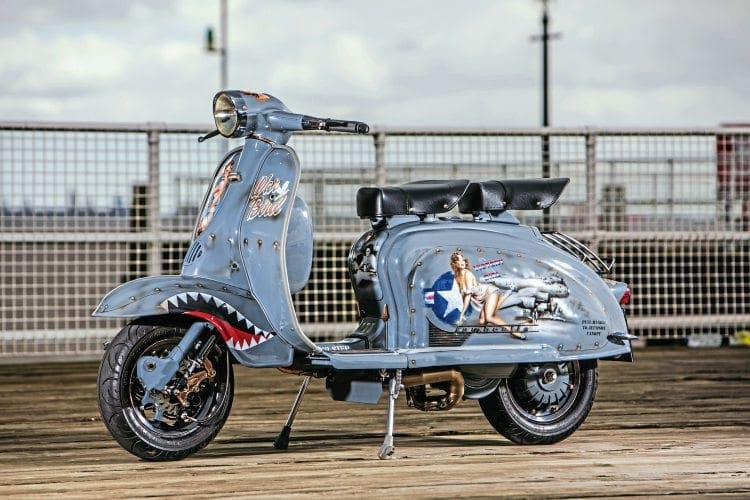 When it came to discussing the sign writing things took a dramatic turn. “I’ve great respect for Colin Fitzgerald’s work at The Garage Artwerks in Northallerton, and so I took the project to him. I don’t know how but we got talking about nose art on Second World War aircraft. In civilian hands an old military aircraft is known as a ‘war bird’ and the name, with its cheeky double meaning, stuck.’

For anyone reading this who spent their youth engaged in something more productive than glueing Airfix kits together let’s rewind a little. During the Second World War, the United States Army Air Force operated from airfields across the UK, bringing a splash of American culture to a drab wartime Britain. Although there was some personalisation in RAF and Commonwealth units, it was the USAAF that embraced the concept fully, painting lucky symbols, cartoon characters and the female form on their aircraft. As the most available space was usually near the front of an aircraft they became known as nose art. The aircraft most associated with this art form is the Boeing B-17 Flying Fortress and it’s appropriate that they feature, almost ghostlike, in War Bird’s scheme.

“I wasn’t looking for historical accuracy; other scooters like Memphis Belle have done that really well. I just wanted to give a feel for the period,” explained Karl. “Although the type of images portrayed on the scooter are usually referred to as ‘Varga Girls’, after the artist Alberto Vargas, only the image of Jayne Russell on the headset is inspired by his work. I much prefer the paintings of Gil Elvgren, who was one of Vargas’ contemporaries. I found some Elvgren pin-ups I liked and then turned them into my own version of nose art. Colin did a fantastic job of interpreting these thoughts; the rivets and staining were his idea entirely and really complete the look.”

Pin-ups can be a hot topic in some quarters with strong views about their rights and wrongs; Karl was aware of this from the outset: “I love the art and the images of that period but I wanted the project to reflect the broad role of women in the war. The toolbox door shows a woman working in an aircraft factory and I’d read about a group of American women, known as WASPs — Women Air Service Pilots. The story of how they fought prejudice to become civilian pilots working for the US military fascinated me and I wanted to represent them in some way. It’s their portrait on one side of the fuel tank and insignia on the rear light unit.” On the other side is a modern portrait of two women in wartime uniform, selected simply because Karl liked it. A TV mini-series, along the lines of Band of Brothers, is reputedly in production so we won’t spoil the story but, in short, the WASPs were trained to fly every type of US aircraft during the war — ferrying them from factories and between units, releasing male pilots for combat operations. After the war their vital contribution was largely forgotten. 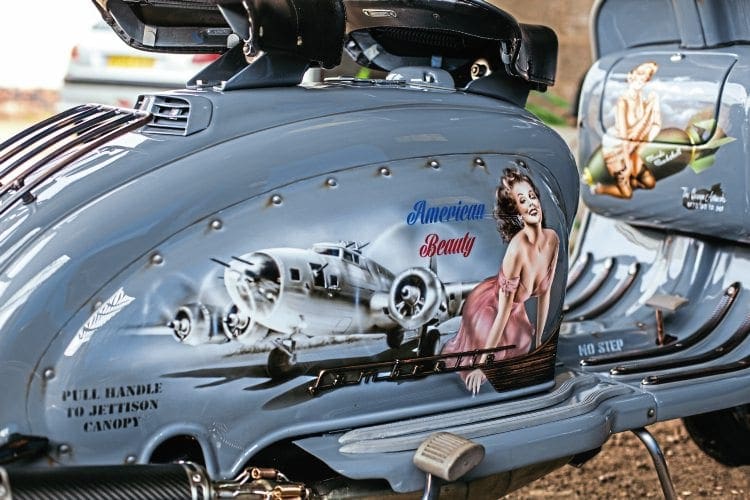 Returning to our original question, where’s the chrome? “I’ve built lots of scooters with chrome and engraving and I no doubt will do so again. I wanted to try something different, more industrial, with this build.” Looking around the bike there’s actually a wide variety of finishes, with satin chrome, copper, brushed stainless steel and rose gold all making an appearance. However the most unusual finish is that of antique bronze, particularly visible on the floor runners, rear rack and SIP tubeless rims. “I like the way it looks but I’m not sure I’ll rush into it again. There aren’t too many people who offer that finish and now I know how labour intensive it is I understand why!” If there’s any doubt about the wisdom of combining these different effects take a look at the front wheel assembly, it’s a work of genius.

Aircraft that spend their lives cosseted away and never fly are known as hangar queens — is this War Bird’s destiny? “I’ve just ridden it through Holland and Belgium, in my opinion there’s no point in owning a scooter and not riding it.” 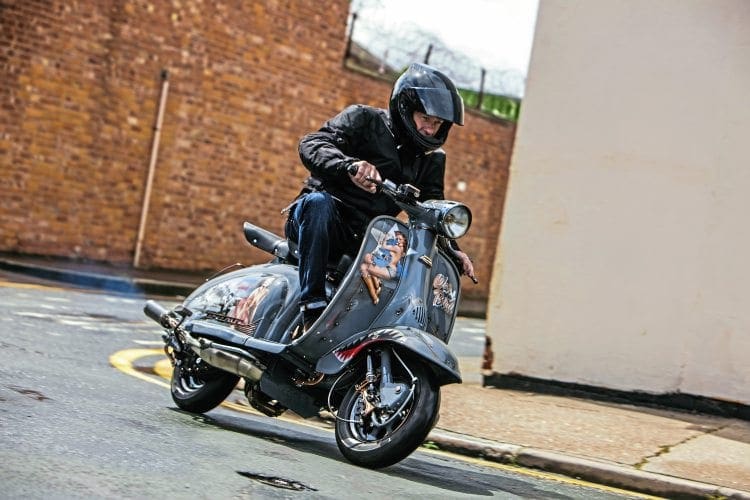 In defying the tradition that says chrome and murals, Karl’s made a brave decision but ultimately customisation is about achieving an effect that’s not been tried before. It’s not very often that happens, but Karl’s achieved it with War Bird. 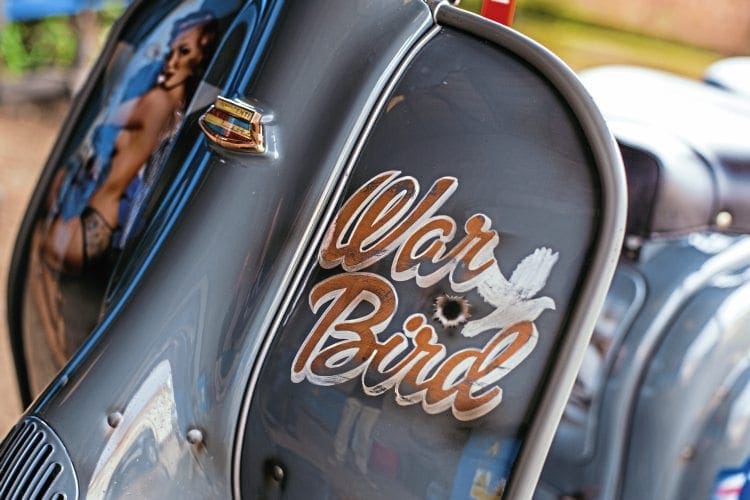 First interest in scooters: Gary Cooper, who played Peter in Quadrophenia is from Hull and his sister’s house was on my paper round. There was a scooter outside and I liked the look of it!

Favourite model: Vespa GS VS5, that’s probably the only scooter I regret selling.

Recommend one part/riding equipment: Invest in good safety gear and keep on top of routine maintenance.

Best memory/story: Most recently? I took War Bird onto the continent, the leg shield covers hadn’t arrived but I thought, ‘What could go wrong?’ I was riding behind my mate and the end can from his exhaust flew off. It bounced about the height of a house and looked like it was arching straight towards me, I thought, ‘There goes my paint”, but it veered off at the last minute and rolled across two carriageways, under trucks and into the central reservation. How it didn’t get crushed I’ve no idea as it was 20 minutes before there was a gap in traffic long enough to retrieve it.

How long owned: About two years.

Condition when bought: Solid but neglected. 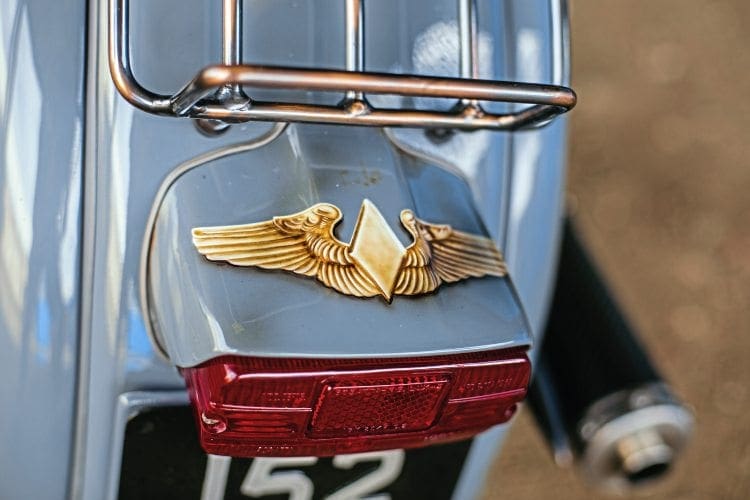 Plating: By Quality Chrome in Hull, I can’t recommend them too highly, best in the business! Advice to anyone starting a project: Don’t ever set a firm budget, it never works out that way.

Thanks to anyone: Paul for the engine casing work, Kenny and Colin for the paint and Scott at Pure Gold Plating in Hull, it’s the only plating we outsource and he does great work.

Colin Fitzgerald is well established on the custom scene and has worked with Karl previously. “I can’t honestly say that it was a difficult commission. Karl understands the custom scene and what works. We’d actually got to final mock-ups of his original sign-written concept when the pin up concept changed things entirely. If there’s one thing that makes me nervous it’s when someone say their next project is ‘pin-up themed’. It’s very easy to drift into bad taste. Fortunately Karl had a clear idea about what he wanted to achieve and beyond the wartime theme I also see a connection to the 1950s waterslide transfers that were popular on early scooters.”

Having been granted some leeway by Karl, how did the rivets come about? “Obviously they’ve been done before but I think there’s a tendency to overdo them. Nothing made of 4in plates would fly or float. There are some big panels on the Series 2. I’ve broadly tried to follow their contours, imagining where pressings could have been made in more than one piece and how they’d weather.” 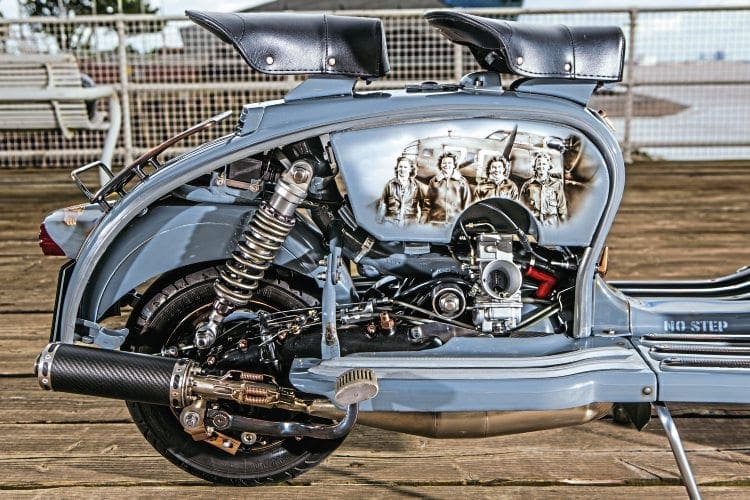