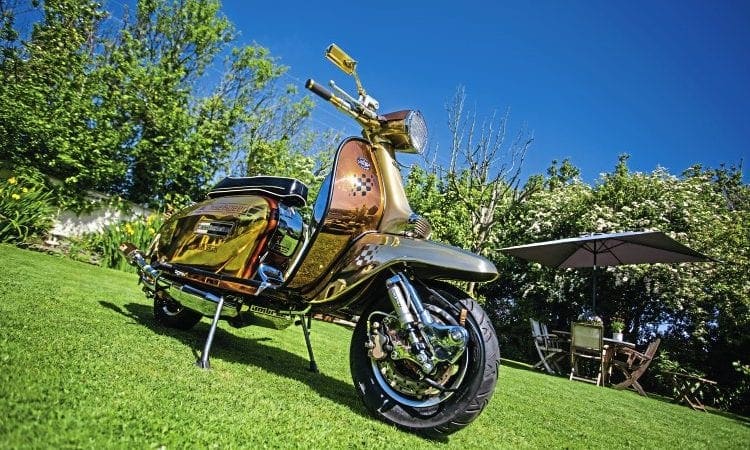 All that glitters is not gold goes the saying. It certainly applies to Brian Rielly’s very shiny Grand Prix, which glistens, glints and sparkles from every angle. 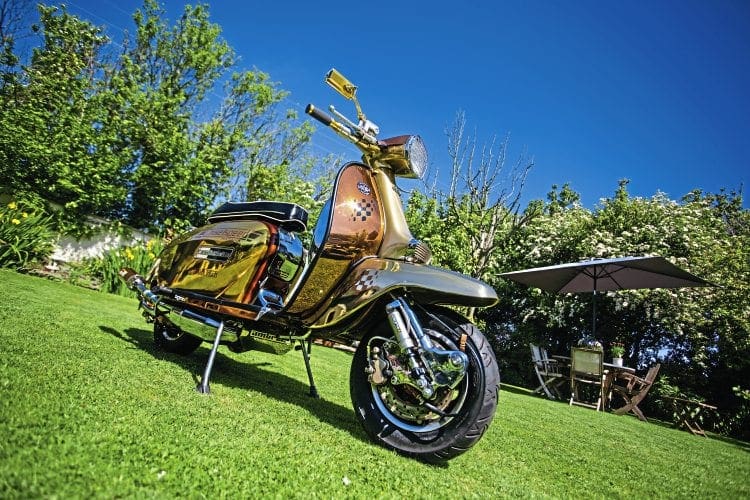 Rewinding back in time three decades, Brian owned and rode a very similar looking scooter. Back then he rode a copper-plated SX, whereas today his steed is a GP. Plus, although at a glance Brian’s Lambretta looks to have had several different metals electroplated onto the surfaces of the bodywork and fittings, the visual effect has been created by tinted translucent lacquer laid over a base of chrome plated surfaces.

Back in the early 80s, during the fledgling days of the advent of National scooter runs, there was a small but significant trend for copper brass, as well as chrome-plated side panels and other body parts. While far from exclusive, scooters commissioned by utilizing non-chrome plating did seem to be a mainly Northern phenomenon. From memory, I can only recall seeing a noticeable number, though not in huge numbers, at the Easter nationals in Scarborough in 1980 and 1981. It’s a distinct possibility that Brian’s copper-plated SX was among the non-chrome machines that embedded themselves in my then younger memory. 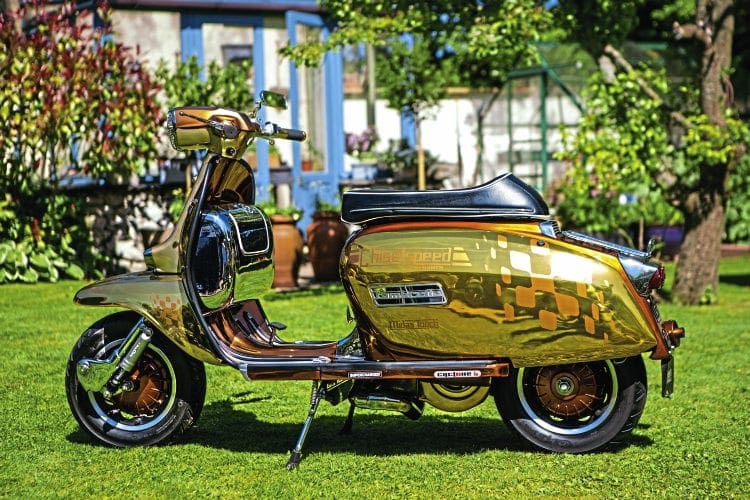 Excluding occasional individual scoots, in general that particular approach to customizing was relatively short-lived, probably for no other reason than practicalities. Copper and brass plating needs much more maintaining than chrome does. Copper oxidises relatively quickly, eventually mutating into a not so lovely shade of green, while brass loses its lustre, tarnishing into a grubby mustard hue. 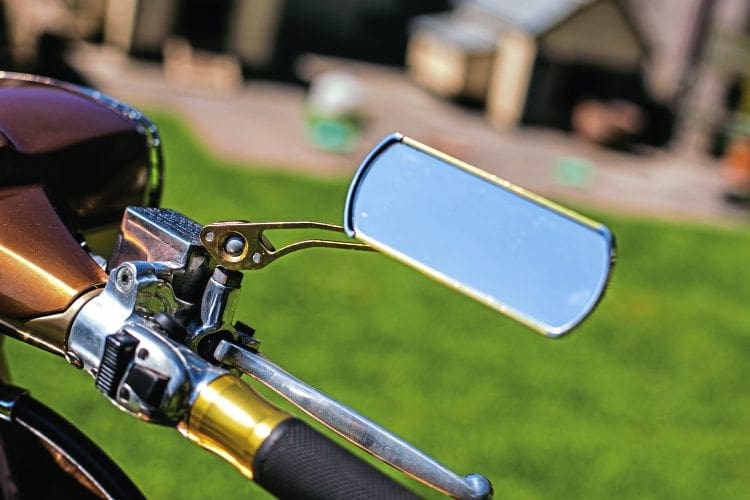 Brian first got into the scooter scene during the 70s, influenced by his brother Bob. His first experience of a scooter rally was Scarborough in the mid-70s on a brand new Rally 200 which he bought from Lens Scooters in Shipley. From then onwards Brian was absolutely hooked, regularly riding all over the UK. He has lots of memories and first hand experiences of the scene in the 70s and 80s but chooses not to share any of them. We here in the UK are still one of the few civilized countries in the world without a constitution or bill of rights, borrowing from the USA, Brian, in effect, has claimed the Fifth Amendment! Quite simply even now he would rather not incriminate himself for some of the things both he and his mates got up to during his younger days! All he’s prepared to reveal and share is that Brighton rallies during the late 70s number among some of the best times he has experienced involved with scooters.

Brian took ownership of this original Innocenti, UK registered as new, Grand Prix Lammy in 2014. He enlisted the services of Chiselspeed, to carry out the bulk of the work on his behalf. Including working their magic on the power unit, marrying up and combining an array of upgrades. The 245cc top end cylinder via Harry Barlow has been ported to Chiselspeed specifications, with a Mikuni carb and Chiselspeed ADS5 exhaust working in tandem so the GP breathes properly. Other non-stock items that have been fitted are noted in the spec sheet. Ensuring everything engine wise behaves as intended the finished article was set up on the in-house dyno. Without revealing an actual figure, as he doesn’t know, Brian informs that his GP is ‘very fast’.

The unusual, interesting and eye-catching finish to the livery of his machine was entrusted to Midas Touch (see box out for details on the finish). Coincidentally this is the name he has christened his scooter with, well, why not, legend tells us everything King Midas laid his hands on turned to gold. Brian’s GP certainly with a cursory glance has a golden aura.

Closer investigation reveals a whole array of both subtle and blatant hints of different shades. Something that many who embark on a scooter build project aim and aspire to create is something different from anything else around on the scene. It’s fair to say that going on the aesthetics of his GP, Midas Touch (the scooter) is unquestionably different, and then some. 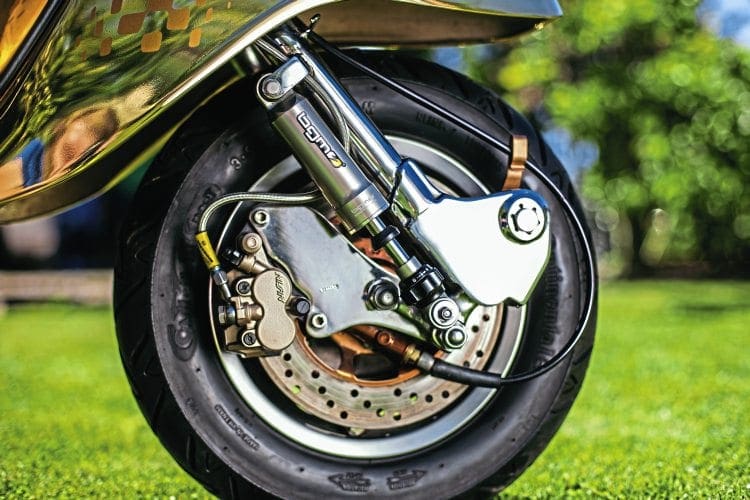 How and when did you first become interested in scooters: Around 1974 through my older brother.

What is your favourite scooter model: Lambretta GP.

What is your favourite style of custom scooter: Street Racer, no murals (spoils the lines). 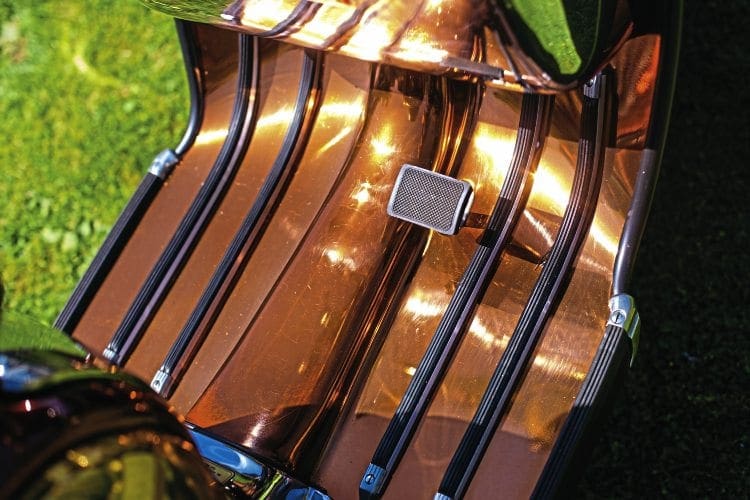 How did you get there: Vespa Rally 200, purchased from Lens of Shipley.

Any stories: Plenty, but nothing I want printing!

Favourite and worst rally/event: Brighton in the late 70s. They are what you make them, it’s the company that matters.

What’s the furthest you’ve ever ridden on a scooter: Brighton, Ireland, Great Yarmouth. What do you dislike about rallies/ events: Sometimes venues can get a bit ‘stale’ when you have done them several times.

Your favourite featured scooter of all time: DTC. 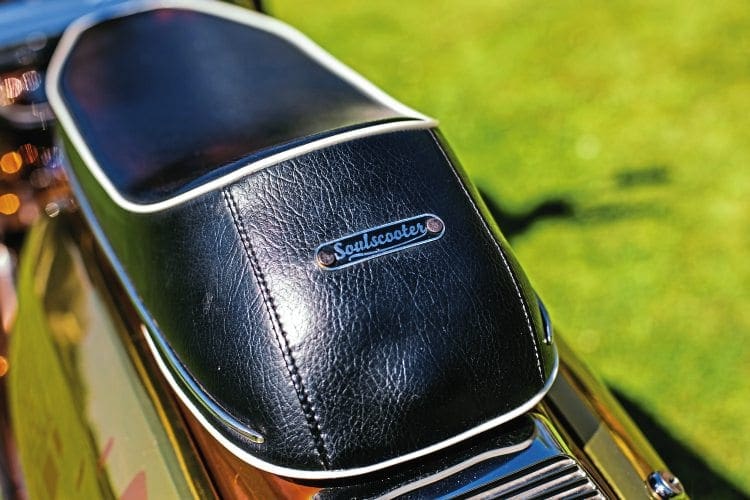 Inspiration for project: Built a similar scooter in the 80s, so nostalgia.

Time to build, and by who: Around 12 months, by Chiselspeed.

Paintwork: All parts were chromed first, then translucent lacquer was applied , all done by Trevor at Midas Touch in Castleford.

To get an overview as well as a bit of an insight into how the finish on this Lambretta was achieved, there was only one man to speak to, Trevor Harrison. Who is, of course, the man behind Midas Touch Coatings based in Castleford, West Yorkshire.

Legislation regarding processes involving chemicals, both the use and disposal of, has changed immensely over the past few decades. Health and safety and environmental laws as well as rules and regulations regarding health and safety, such as the CoSHH act of the 90s, and RoHS act of the late noughties among others, have bought major and sweeping changes into being.

Trevor says: “Environmental laws about using and disposing of chromic acid, copper solution and various phosphates these days are non-negotiable. Yorkshire water are very strict on the application of the law. If they find one dead fish in any rivers in Yorkshire, they can trace back the chemical DNA of the cause. They don’t mess about, there’s a 20 year prison sentence for anyone who breaches those laws. The process of copper plating these days is vastly different to how it was in the 70s and 80s. 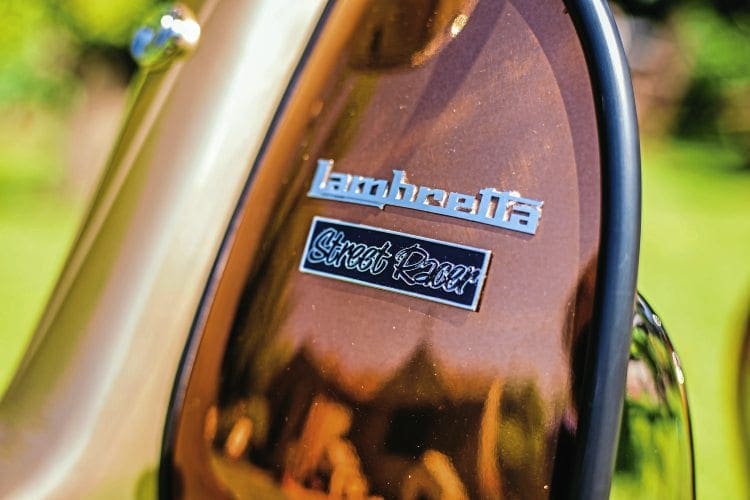 “Back then it was a similar process to that of chrome plating, with whatever was being plated going through a series of tanks over a few hours. These days copper plating is applied in a few minutes, flash plating it’s known as. To achieve the appearance of plated metal I use a translucent lacquer impregnated with colour. Greens, reds and blues all give a stunning finish and appearance, though it is available in almost any colour you want. My own GP, which is KTM powered has a copper and orange finish. When Brian from Cumbria bought his scooter to me about two years ago, he saw the copper effect on my scooter and wanted that on some of his scooter. 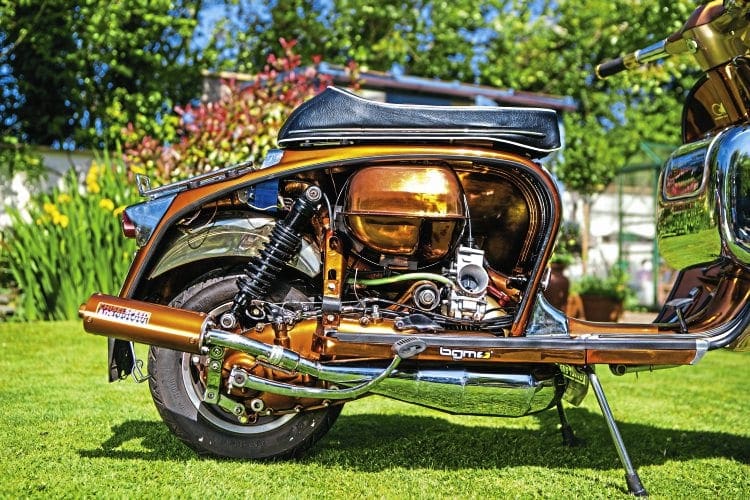 “It’s an American lacquer that’s been around for some time now. Basically it’s applied in a similar powder coating. Although it isn’t quite as simple as that, you don’t just put it on, there is a part of the process, a special technique I use that I’m keeping secret! Brian’s GP was chrome plated first then the various coloured translucent lacquer applied on top. An advantage of this lacquer in comparison to older lacquer as used over cellulose paint, is that after its been baked on its much more resilient, stronger and tougher in comparison. It’s practically chip proof, whereas the older/normal lacquer was susceptible to chips and scratches. A number of plating processes are set to be totally outlawed imminently with more legislation coming in to force. To achieve the appearance of plating, arguably the only way in the future is by using coloured translucent lacquer powder coating.”