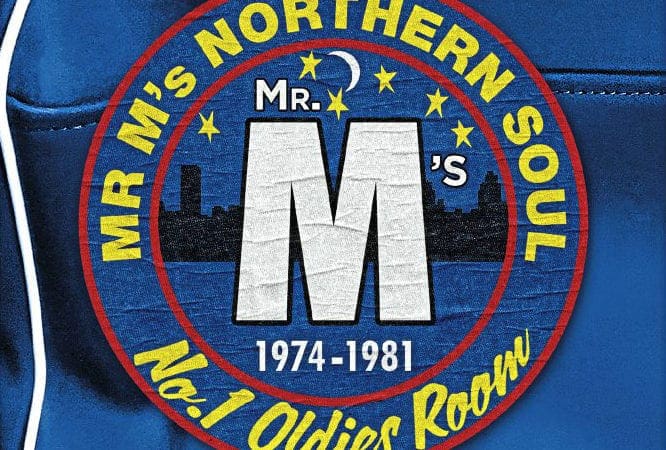 Initially opened as an overspill room at Wigan Casino first anniversary all-nighter, Mr M’s, a venue within a venue, became an integral part of the Wigan Casino legend.

Until recently, despite countless compilation albums and CDs featuring northern soul, there has never been even one paying homage to Mr M’s. For seven years Mr M’s ran as an annexe, within Wigan Casino. Such was the impact of Mr M’s, it eventually spawned its own monthly oldies all-nighter at the Casino.

Dave Evison has compiled the extensive 30-page booklet accompanying this box set, as well as the CD track listing. Dave was known as Mr Oldies during the Golden Era, as not only did he provide a main room oldies spot at Wigan Casino, he was also synonymous with the legendary Mr M’s. Having experienced, first hand, many a time, Mr M’s unique atmosphere, I can confirm the tracks featured on this box set capture some of Mr M’s very essence. We caught up with Dave Evison for some of his memories of Mr M’s.

Mr M’s was an amazing success for seven years, yet it began almost by accident.
At the Casino first anniversary night, there were so many people queueing outside that Station Road was impassable. Something had to be done, and fast, or the police would’ve closed the all-nighter down. A decision was taken to open the smaller function room off the balcony to cater for the overspill. What wasn’t known on the night was that there had been a sizable number of counterfeit tickets printed!

Following the anniversary all-nighter people put pressure on the lease owner Gerry Marshall (Mr M’s was named after him), who eventually agreed to open Mr M’s as an oldies room at the all-nighters.

Music in M’s was oldies, although not all records played were former all-nighter plays.
When Mr M’s started there were only four or five years of northern sounds to draw oldies from. Music from the ‘Wheel, Catacombs, Torch and ‘Mecca made up the majority of the early playlists. The emphasis was up-tempo, which was reflected in the intense atmosphere.

For me personally, M’s was a testing ground of sorts, if a particular oldie was going well in M’s it would find its way into my main room Wigan Casino oldies spot. Yes, there were records played in M’s as oldies that had previously been youth club soul spins. Towards the end, main room Wigan Casino plays from the first few years were being revived in M’s. There was more of a mix of both northern soul and 70s soul oldies being played.

What’s your view of the long-lasting affection held by many ‘Casino regulars for Mr M’s?
While I was lucky enough to have been a small part of what made M’s so special to so many, I was dumbfounded when I found out, from different people, from different parts of the country, that their trips to Wigan Casino consisted of going up two flights of stairs, along the balcony and through the doors to M’s where they’d stay until M’s closed!

It did exceptionally well for something that happened unintentionally.

Everyone involved with Mr M’s played their part, though at the time I don’t think any of us realised just how special M’s was to so many people.

Compiling the Mr M’s CD box set must have been something of a labour of love for you. How easy, or hard was it deciding which tunes to include?
I am immensely proud of the box set, the hardest part of compiling it was licensing from other labels that hold the rights to certain tracks. The bigger the label, the harder it was. The first record played at the first-nighter in M’s, Mickey Lee Lane — Hey Sah-Lo-Ney, and the last record played in M’s, Frankie Valli — The Night, had to be included, the others capture what Mr M’s was all about. The ‘radio show’ interview CD was recorded in an hour with almost no notice!

Finally, what are your personal top five memories of tunes played in Mr M’s?
Ha ha, I wish you’d pre-warned me, this’ll be almost as difficult as selecting records for the box set!

Sad news of the passing of original 60s Mod, scooter scene, Mod scene and ska/reggae DJ and promoter Pete Tebbutt broke in November. Pete worked alongside Sean Chapman in promoting and DJ-ing at many events enjoyed by Scootering readers. Sean wrote a heartfelt tribute to Pete, which has been reproduced in full below, with Sean’s blessing.

My very best friend Pete Tebbutt age 67 sadly passed away on Thursday, November 16, 2017. Pete Tebbutt was renowned in the northern soul, Mod and reggae and ska scene worldwide. An original Mod growing up and living in Luton, he would with his older brother Mick take a weekly train trip to London to check clothes and more importantly records out. Listening to music in theTebbutt household from as early as 1959, Pete quickly got both an interest and a very good ear for music.

As soon as he was earning money he was buying the usual Tamla Motown and Atlantic 45s but it was the purchase of an Artwoods record in 1966 that made him look past the usual club sounds. Over the years Pete has amassed some massive collections including psyche and beat, northern soul, and R&B. However, over the last few years, Pete has sold most of these off for other projects but still has one of the best ska, reggae and rocksteady collections in the world.

Pete Tebbutt was like a big brother to me, although I have only known him 18 years we did so much together. I first met Pete at a northern soul night I was running at The RAFA club RAF Halton in 1999. On our first meeting we just hit it off instantly and as our friendship grew we got together and formed the Talk Of The Soul, soul club in 2001. For the next seven years we used the Luton Rugby Club as the venue to host our soul nights and I believe one of the best clubs in the UK during the naughties with a host of leading DJs gracing the decks, plus Pete and myself as residents.

After seven years at the rugby club we spent the last couple of years at The Royal Hotel in Luton. After having problems with the management at the Royal Hotel we finally called it a day in 2010. Also during this time, we did two all-nighters under the heading of Talk Of The South at The Newport Football club at the 2002 and 2003 Isle Of Wight Scooter Rally and also working at the Hipshaker Mod events.

We also worked for Rob Bailey running the Volks at Brighton Mod Weekender recently and on three other occasions, Pete also ran these with his son Kris Tebbutt on several other occasions. I have to say Pete was fantastic to work with and always added that touch of experience to everything we were involved in when dealing with problems.

Pete ran loads more Mod and reggae and ska and scootering-oriented events over the years at various clubs but in the last five years worked with Kris running the very successful Reggae Jeggae club in Luton and Work Your Soul in Luton, playing reggae and ska and mixing in R&B and soul. He brought in all the top skinhead DJs Pete played at the famous Mousetrap (London) R&B all-nighters many times.

He also appeared many times at Crossfire Mod nights in London, also playing in Italy on a few occasions and loads of guest spots all over the UK at soul, Mod and scootering events including the Reggae Room at Camber Sands and Hemsby. Pete had a great collection and delighted in putting all those big hitters on the decks, using his excellent microphone skills to great effect and creating a buzz on the dance floor. In my opinion, he should have been used even more on stage as a national DJ, although, Pete never really wanted the attention and was always happy for others to take the credit.

Pete Tebbutt was a decent and kind man who absolutely adored all his family and was the steadying influence and he will be greatly missed by all those he came into contact with. I have learned so much about music in my time in his presence and he has guided and mentored me over many years and always there to offer advice on what to buy next. Instead of keeping the records to himself, he always let me have them in order to get them played at major venues, but more important, Pete was always there for me, whenever I needed him. I will truly and deeply miss my best friend, Pete Tebbutt RIP.