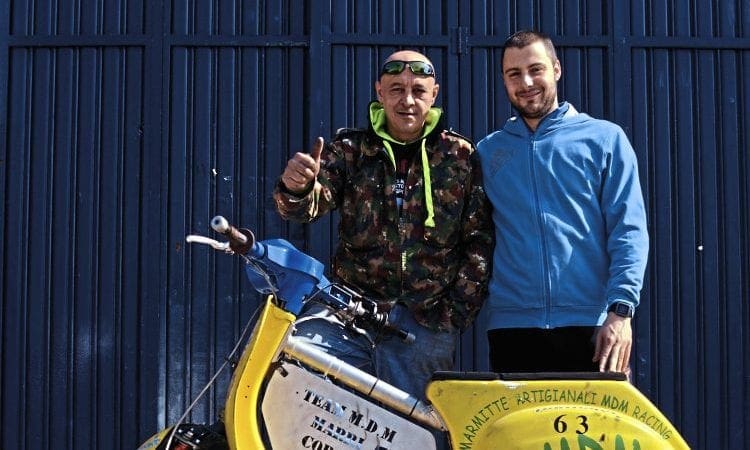 Christian takes us on another Italian journey, this time to see how Gianluca Marri of MDM constructs the single most power influencing component of any two-stroke motor: the exhaust. 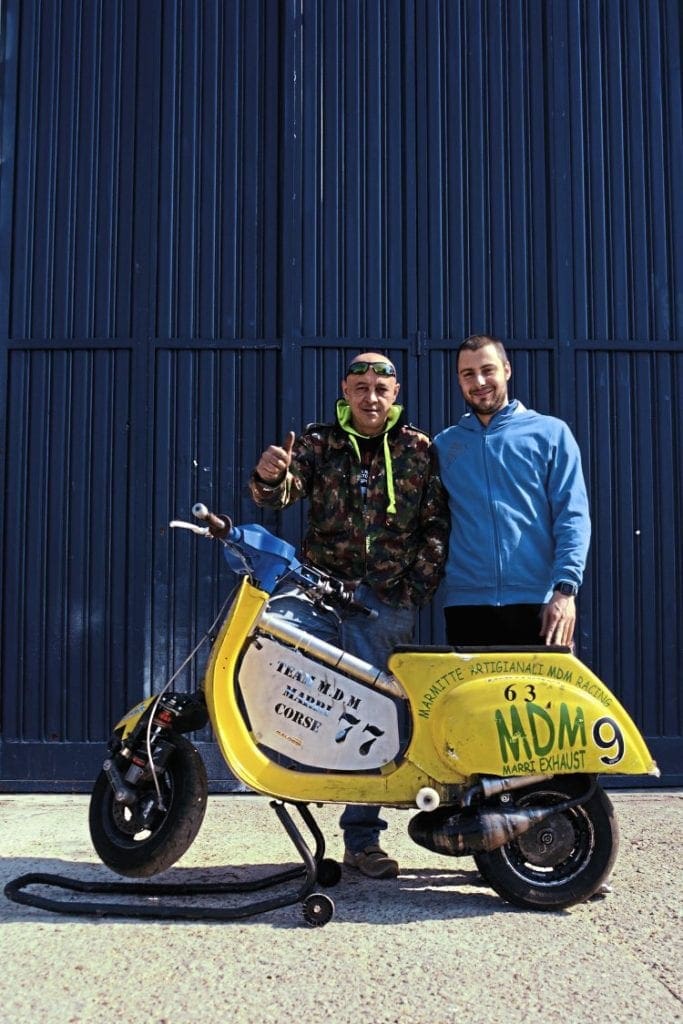 The latest stats show some 4.5 million people living there today and if you’re trying to make your way through its streets it feels like twice as many. From dawn till dusk the city’s asphalt, stretching in all directions like the tentacles of an octopus, is choked with cars. Attempting to go from A to B on four wheels can quickly get you hot under the collar — so the best way to explore is astride a scooter.

Threading your way through Roman roads on a Vespa, glorious sunshine beaming down, can be one of the finest experiences known to scootering. One minute you’re brushing against the Pyramid in Testaccio, the next you’re parking up 200m from the Collosseum or sitting down to have a drink in the Via Veneto — you name it!

But Rome has a darker side too. When the rain comes this downtown idyll becomes a nightmare of grease and slime. Side-streets are seemingly made of sheet ice and main roads are slick enough to put your metacarpals and ribs at risk of sudden and serious injury.

Circling Rome’s tangled web of inner city roads is the imposing 68km-long Grande Raccordo Anulare or ‘Great Ring Road’. Sprouting from its flanks are 44 interchanges which spill out onto the old consular roads built during the Roman Empire — Aurelia, Cassia, Flaminia, Salaria, Tiburtina, Casilina and Appia. The history of each is intertwined with tales of battles, rebellions, treachery and murder but that’s another story.

It is February and my Vespa and I are speeding along the last one on the list, the Appia, in search of a craftsman known in the region as the ‘wizard of exhaust pipes’. I reach Gianluca Marri early in the morning, savouring the smell of the olive trees lining the road to his workshop. The four dogs standing guard outside regard me coolly as I step from my scooter and their gaze is just beginning to make me nervous when Gianluca steps out and firmly shakes me by the hand. “We just moved, I’m sorry for the mess,” he says. Noticing my gaze stray to the sunglasses on his forehead he grins. “I use them both on the beach and when I have to weld.”

Looking past him, I can see the familiar outline of a Lambretta Li waiting to go under the knife. Gianluca explains that it is to be paired with a new exhaust he has just shaped using his hammer and torch. They say a good craftsman should have clean ideas and dirty hands and that is exactly how it is with Gianluca. He is ably assisted by Damiano Bianchi, a civil engineer with a passion for two-stroke engines who runs the WhiteOne Racing Facebook page. Damiano does the testing and racks his brains for new and better solutions with every single motor. After all, finding the right exhaust for a specific engine is just like finding the right Cinderella to fit that glass slipper.

“I don’t actually work here,” remarks Damiano dryly. “I help Gianluca because this is my personal passion. I don’t want to be paid for it too.” Could anyone do the amount of work he clearly does without a single thought of payment in return? Evidently they can. While Gianluca turns aside to begin work on the Lambretta and its muffler, the Damiano ‘lesson’ begins.

“The expansion chamber type exhaust design allows you to manipulate the resonance period of the pressure waves which are produced by the exhaust phase of the engine’s power stroke; exploiting them in order to obtain a supercharging effect and increase the efficiency of the engine,” he explains. The pipe exerts a real effect on the gas expelled from the cylinder: the pressure wave output from the exhaust port along the exhaust’s diverging cone (the first portion of the expansion chamber) leaves behind a pressure depression capable of drawing a greater amount of fresh charge through the crankcase.

“During the transfer/exhaust phase in the cylinder a part of the fresh fuel/air charge exits the cylinder into the exhaust, but is subsequently pushed back into cylinder by the pressure wave reflected from the convergent cone, where it then contributes to combustion and power. To construct an expansion exhaust means making calculations and experimental tests through which it is possible to find the correct dimensions and angles of the various sections each exhaust is made up from.

In the expansion chamber you can identify different parts…

Manifold/header section: This is the section from the exhaust port of the cylinder that arrives at the divergent cone and which also has the role of suitably adjusting the time period of return of the waves.

Belly section: A simple element, but of great importance because its length influences the return time of the pressure wave, reflected by the convergent cone, which should arrive at the cylinder when the transfer ports are already closed, but the exhaust port is still open… in order to stuff any fresh charge back into the cylinder.

Convergent cones: The component that, according to its measurements, affects both the timing and intensity of the return wave of pressure reflected: a very convergent angle generates a very strong and quick wave.

Stinger and silencer: The piece responsible for the emptying rate of the expansion chamber, with repercussions on the internal temperatures of exhaust gases, and thus the engine temperature also. In this sense, the various stinger dimensions affect the gases’ bleed rate and temperature.

Cone tapers: Small angles produce weaker waves, while higher differences produce stronger waves. You can section cones into a series of different angles, to achieve a cone with variable divergence, optimizing in this way, the tuning of the exhaust for a higher maximum power and wider spread of use.

For the design of the exhaust system two main aspects are first relevant:

Sizing: Size should be calculated on the volume of exhaust gas which runs through the pipe, for adequate speed-out (exit) capacity but not excessive, which would be detrimental to the efficiency of the expansion.

It seems incredible that getting a piece of iron to perform perfectly for the best possible performance requires you to begin by cutting up bits of white paper, but the best designs start with drawings and mock-ups — cutting out templates that will subsequently be traced and transferred to sheet metal. After cutting this into the desired shapes, Gianluca finishes each piece with great care, making sure that the edges are perfectly clean and properly aligned. Positioned together, the pieces of the puzzle are then TIG welded into place. This is where the true art of the craftsman comes into play.

“The attention and the craft is the key to everything,” says Gianluca, now hidden behind those ever-present sunglasses. “You should not dissolve too much material in the molten pool as it would seep inside, ruining the turbulence of the gas. The join must not be too weak, with too little material either! A weak join could result in damage or even injury to the rider.”

Once this procedure has been completed, the new welded connection has to be levelled out using a hammer ¬thus creating the perfect fit. So piece by piece, curve after curve, the muffler takes shape before my eyes. I watch as Gianluca pirouettes gracefully across his workshop, from one location to another, like a professional dancer. So much poetry and dedication for a seemingly simple object. At the end, cradling the long tube in his arms as though it were his firstborn child, Gianluca looks me straight in the eyes.

“In the past, in order to calculate the curve ratio with any accuracy you had to use some trigonometry formulas, bending the lips of steel inward. Now, fortunately, there is software that helps you save time and avoid possible calculation errors due to fatigue.

“As you can see it looks quite simple but to get to the right end product I have had to spend 30 years of my life working at it, starting by helping my grandfather and my father to forge irons for horse hooves.”

I have a thousand questions to ask Gianluca and Damiano, but prefer to leave the ‘exhaust wizard’ and his faithful companion to their work — preserving their professional secrecy as you might with a master chef when tasting his special dish. Gianluca and Damiano have a mantra when it comes to exhausts: “Think, design, test, improve.” You might say that they have a technical-creative approach. Before it is time to say goodbye though,

I spot a patch of brilliant yellow paintwork sparkling under the edge of a tarpaulin. I ask whether I can take a peek at what lies beneath… Gianluca humours me, throwing back the cover to reveal the racing Vespa he used to compete in the VPI championship. The sleek machine, bright but battered, has seen better days and is currently waiting for attention. It sits sullenly, the wounds it suffered during its last outing still raw. A crash necessitated field surgery, leaving scratches and dents. There is a sad patch of oil on the ground beneath it. Considering the tenacity and passion of Gianluca I do not think the Vespa will remain this way for much longer though.