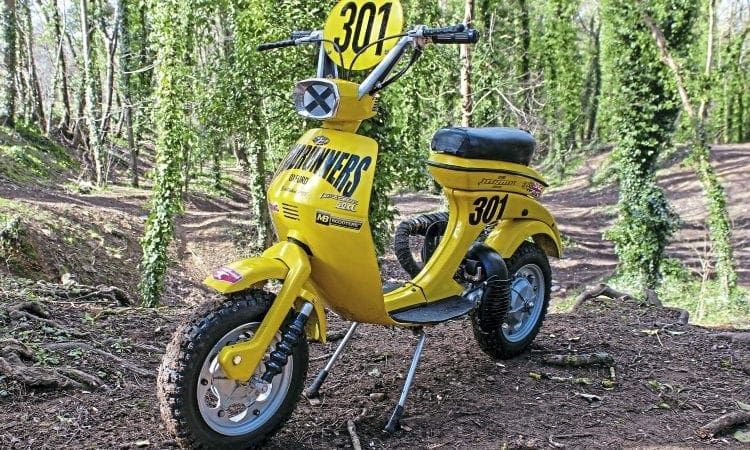 Fat Boy 3 prepared a Lambretta Lui 50 to take part in a series of off-road endurance races. Last month we gave an overview of the build and conversions; we now take a look at how the beast performed…

Day At The Races

Route 34 Motopark in Hampshire is a purpose-built, off-road complex. There are two circuits on site, both of which can be run either clockwise or anticlockwise, giving four options for any promoter to choose. The previous weekend’s arctic conditions, coupled with torrential rain on the day prior to the first race, meant that the ‘going’ for the race would be interesting, to say the least! This is understating just how demanding it was for all teams early on.

The Fat Boy 3 team were on site, signed up and ready to take on the challenge before 9.15am. Spread across the three classes that would simultaneously be sharing the track were 50cc trial and motocross motorcycles, a number of older motorcycles, a number of various 50cc step-through mopeds and some twist and go autos. There was only one classic scooter, the Lui 50, rechristened Lu1e as there were several FS1E items that were integral to its off-road conversion.


The riders’ meeting took place around 9.45am, with the paddock and track limited to teams of competitors, race officials and accredited persons only. Granted it’s a motorsport race meeting and has to comply with the various rules and regulatory requirements. Also, as a charity event, it’s very much a fun day out too. Some machines and team riders were competing in semi-fancy dress: Arabs, First World War soldiers, superheroes and furry monsters were among those adding to the spectacle. Our scooterist Fatboy 3 team, resplendent in brand new matching Innocenti overalls and with sponsor T-shirts underneath, with the pristine-looking 50-year-old Lammy looked like they meant business. Many complimentary comments about the Lui were directed at the team from other competitors in the paddock, with the occasional ‘what’s that’, enquiry. Plenty of good-natured pre-practice, pre-race banter exchanged too. A team which had a couple of Aussies in their number asserted ‘we’ll wave at you each time we lap you’ to the Lu1e riders. More about them later.

Stuck In The Middle

The track first opened for a 15-minute practice session for all teams. Rob Farquharson aka Smurf was first of the trio to take Lu1e onto the track. Looking the part in the paddock and delivering the goods out on the track can be miles apart as a number of teams discovered before managing to complete even one practice lap. Including the Fat Boy 3 team and their Lu1e. Owing to recent weather, certain sections of the track had been turned into a near impassable quagmire of thick, clay based mud. Smurf managed to negotiate about a third of a practice lap before the little Lammy literally wouldn’t and couldn’t move at all. So clogged up with thick, sticky mud were both the front and rear wheels, neither would turn. Hi-viz vests donned, Mark Byron aka Nobby and Paul Lowden aka Latemeister, went out on foot to try and help rescue Smurf and the Lammy. Many other teams encountered similar issues, Eventually, seconds before the five-hour test of teams and machines began, the Lui and Fat Boy 3 arrived back in the paddock.


Removing more than a few kilos of Hampshire clay based mud was the first job on, next was removing both the front and rear mudguards along with the auxiliary front dampers. All being areas where the sheer build-up of collected mud had literally stopped both wheels from turning. Emergency first aid completed, 20 minutes after the racing had started, Nobby was the first team rider out on the track. By the time he’d reached the point where Smurf had been no longer able to move forward, he was encountering similar problems. Smurf and Paul set off on foot to give assistance. This got him moving again, albeit slowly, aided by Nobby paddling the Lu1e along in a semi-forward direction. On one of the slowest sections on the circuit, aided and abetted by the still thick mud, Nobby performed what must be a contender for the world’s slowest ever falling off on a race circuit. His efforts were captured for posterity by one of the many scooterists along to support them! That’s what mates are for, isn’t it? Both Nobby and Smurf were still out trackside, though neither was able to help Nobby for a while; not until they’d both finished laughing uncontrollably at the slow-motion spectacle. Teammates – don’tcha just love ‘em! Back upright, more mud removed Nobby and the Lu1e eventually completed Fat Boy’s first lap of the day in around 40 minutes total!

The smell of burning clutch plates surrounded the arrival back in the paddock. Given the Lui 50 only runs a two-plate clutch, this seemed ominous. More mud was removed during the pit-stop. The smell of burnt clutch plates may have been contributed to by the Lammy, but the bulk of it was produced by the team close by. Yes, that team with the Aussies – they had clocked up two laps before absolutely wiping their clutch out, bringing their day to a premature end. So there was no waving as they lapped the Lu1e after all!

During the pit-stop it was discovered that the front brake had started to bind, which certainly wasn’t helping the Lu1e achieve a forward trajectory.


Both 300×10 Pirelli knobbly tyres had their pressure dropped to 12psi, which helped a bit. Adjustments and tweaks completed, and it was Paul’s turn. Similar slowing, near stops and actual stops, blighted his first lap, though he came in with a lap time of half that of Nobby’s first circuit. More necessary mud removal, predominantly from the forks and wheel, the odd adjustment where required and Smurf set off on his first lap of the day. It was almost an echo of Paul’s first lap, getting bogged down, stopping and the like. Except he managed to put in a lap of marginally under 15 minutes.

Some teams were faring better than others in coping with and overcoming adverse conditions on the track. Obviously, the more off-road inclined machines were powering round, while it was mixed fortunes for teams riding less compatible 50cc machines. Veterans of previous nifty fifty endurance race series seemed more than confident that as the day progressed the track would dry out and racing would be more like actual racing. Indeed the track did start to dry out, compared to their first individual laps, Fat Boy 3 were getting in laps that took under eight minutes. Pit stops between each lap became shorter and shorter, a combination of the drying track and learning to remove as much mud as possible, quickly.


As the last hour of the day’s endurance race began, the only classic scooter taking part after the early changes seemed to be holding up at least as well as could be expected. Given the conditions, Fat Boy 3 Lu1e was coping probably better than expected. So far the clutch was holding up to some serious abuse; not only did it need slipping at full throttle on certain sections of the track, at that stage none of them had managed to get it out of first gear. Some teams were having two-, three- or even four- or more way battles with each other, while other teams still running kept plugging away, clocking up the laps in competition of sorts with teams and machines of similar capabilities. As for Fat Boy 3 and the Lu1e, well, trying to get a quicker lap time, coupled with achieving (at least) second gear was their own personal target. And despite a previous exhausting, gruelling four hours’ racing, rescuing of teammates and pit stop adjustments, the trio really went for it.

Their individual final four laps of the day were all sub five-minute laps. Nobby and Paul delivered near identical times, with Smurf, on what turned out to be the team’s penultimate lap, coming in under three minutes. Despite all three trying, second gear proved a bridge too far. The last lap board went out, leaving Nobby to pilot the final lap, and topping it off by crossing the line with the chequered flag waving.

(We Can Be) Heroes

Fat Boy 3 came, saw and gave it their all in what were very testing conditions. The preparation to the Lu1e was pretty much top notch, the clutch held up for the entire five hours.

The day before the race a notification from Rimini Scooter Centre arrived informing the close ratio Lui gear cluster had been dispatched from Italy. Given that the little old Lambretta couldn’t or wouldn’t go beyond first gear in the conditions, even if it had arrived in time it probably wouldn’t have made a lot of difference. Despite being on the only classic scooter at the first enduro of the series, despite it being a much steeper than anticipated learning curve, Fat Boy 3 didn’t embarrass themselves. Far from it.

Overall they finished 42nd out of 53, which is a fair gap from the last place, they ended up in joint 10th place in their class. From the sizable amount of scooterists who came along to watch and support Fat Boy 3, there is already talk of another Scooter, a Vespa being built to take part later in the season.

Bespoke one-off trophies are presented to class winners, also the race promoters award a trophy for Best Endeavours which is presented to the team that put in the most amount of effort. The sheer bloody-mindedness and determination displayed by Fat Boy 3 for the duration, saw their efforts rewarded with them collecting that particular trophy.

Via their Just Giving page, Fat Boy 3 has so far raised well over £1000 for their chosen charity, Barnardos. Part of Fat Boy 3’s aims in entering the Nifty Fifty Endurance challenge was to mark the legacy of success in racing and off-road scooter sport of their scooter club, Oxford Roadrunners, in its 40th anniversary year. Which Fat Boy 3 did and with a touch of class too.

Since 2014 The Nifty Fifty Endurance series has been running at Route 34 Motopark. It’s open to teams of up to four riders, and the five-hour long endurance meetings are run as an economical way of having a fun day out racing.

The organisers have also raised more than £50,000 for the charities nominated by the various teams. The events are well run, well marshalled and held at a venue that is easy to access just off the A34 in Hampshire, a few miles North of Winchester. The first races of this season were in March and May, and further meetings are on July 21 and September 22. Registration for teams competing is already open. For rules, regulations, entry details and other information, visit the website below. Currently, there are three classes available. Details on how the classes are defined can be found on their website. Facilities on site are clean and functional, with a toilet block as well as the hot snacks and drinks outlet. It’s free to watch as a spectator, though it may be advisable to pack your wellies. www.niftyfiftyendurance.com