With his P2 in pieces and the Avimore rally to attend, Stan asked if there was a scooter he could borrow. Of course there was. Nine hundred miles on an LML 125 auto… what could possibly go wrong? My trip to Aviemore was looming, the PX200 was terminal, and Dan had an LML 125 in for test and review. I could see where this was heading. Try as we might to save the P2 in time, it was not to be. The good news though, explained Dan from the comfort of his armchair, was that a 900+ mile trip up to Scotland would really put the LML through its paces. He was right!

Here’s where I need to mention something important — having committed to riding a 125 auto to the Scottish Highlands, I’ve never actually ridden an auto, other than a brief holiday flirtation 30 years ago! I’m not opposed to them, I’ve just never felt the need.

I’m surprised how quickly I get used to the new riding regime. At first I stab the floor looking for the brake but I’m also pulling on the ‘clutch’ at the same time so no harm done. There’s no lag accelerating out of junctions, it reaches top speed quickly (59mph GPS) and happily stays there. It’s not going to break any speed records but this might not be too bad.

One thing I notice is the fuel gauge. Like many PX owners I gave up relying on mine years ago, the red light illuminates when it hits reserve and that’s all I need. It’s a surprise to learn that when the LML gauge reads empty, it is actually empty and there’s no idiot light either. At least I know it’s easy to push.

Today’s an opportunity to look at the LML and first impressions are mainly positive. It’s important to realise that although it resembles a PX, the LML is a different machine entirely. Comparisons are inevitable, however most of them are irrelevant. The finish is at least equal to a PX and the metallic green paint attracts favourable comments. LML have recently facelifted the Star, adding a distinctive new horn casting, perhaps a sign of growing confidence in the product? If there’s one area that the auto/PX crossover’s likely to disappoint in it’s storage. Fans of autos don’t expect a spare wheel, but are used to under seat storage whereas PX users expect the opposite but the layout of the LML means both will be disappointed.

The stand requires a different technique to classic scooters as it can’t be used while astride the bike. Once mastered, it’s perfect for those with slight upper body strength.

The biggest let down is the seat, not that it’s uncomfortable, far from it (spoiler alert — I never once felt saddle fatigue, even after putting in some very long hours). The vinyl used on the cover looks very 1970s but not in a cool retro way.

One advantage of the PX heritage is that most Vespa accessories fit and with my front carrier transferred I load up and close the garage door, looking forward to our adventure.

The LML isn’t designed to crunch miles on motorways, so let’s start with that. For most of the day it’s full throttle riding and the LML takes it without complaint. The heavens open for the last hour of the ride and with rain standing inches deep in places it’s a good real-life test of LML electrics. One that it passes without a hitch.

Having done zero prior research on the LML I go through the spec sheets that evening and I’m surprised to discover that with a dry weight of 112kg, the LML is 15kg heavier than the PX — I’d have put money on it being lighter. A quick calculation says this, plus luggage and the fact that Dan calls me ‘Big Stan’ for a reason makes me realise that the LML is, near enough, operating as a two-up PX. I go to sleep with a new found respect for my travelling companion.

This morning the LML’s in its natural environment — Glasgow’s rush hour. For the first time I really appreciate the benefits of an auto as the power delivery at low speeds is instant. This, combined with a well set up disc brake makes filtering effortless.

Heading north it’s back to more dual carriageway riding on the A9 to Aviemore. The LML motors along quite happily; it’s only when it reaches an incline that the lack of power becomes apparent. It tackles short sections quite easily but on longer stretches I find that it’s losing revs. I try repeatedly to locate a ‘kick down’ facility but there isn’t one. It’s certainly not the yellow button next to the indicators — that’s the kill switch and pressing it does nothing to aid forward motion.

Our LML makes its scooter rally debut and although this is a low mileage day it’s a completely different type of road to those it’s encountered on its travel so far. The ride out is to the Cairngorm Mountain Railway, a hefty 2083ft (635m) above sea level. The pace is brisk along B-roads that twist and turn as we gain altitude.

Handling is a revelation as it enjoys cornering far more than my P2. Perhaps it’s the engine’s weight distribution but it feels more like a Lambretta. Suspension is on the comfortable side of firm and all things considered it’s a thoroughly rewarding ride.

My Scottish hosts are determined that I take the scenic route south, using the A82 through Glencoe. I’m not claiming that the LML is any match for a Malossi 210 kitted PX but it does manage to keep up with traffic. Riding in company I begin to notice just how noisy two-strokes are.

The four-stroke engine note may not be to everyone’s taste but from an aural perspective it’s far more enjoyable than expansion pipe-induced tinnitus.

My companions ask why I’m leaving the indicators on. The switch has a vague feel to it, particularly with gloves on, and from then on I’m constantly checking that it’s switched off.

With the rally over there’s nothing to hang around for and I make good progress. Other than petrol stops I constantly push the 125. The scooter doesn’t deserve such brutal treatment but the air-cooled engine only begins to feel tired for the last half hour or so. In protest the speedo cable snaps just short of home — apparently a common LML fault. 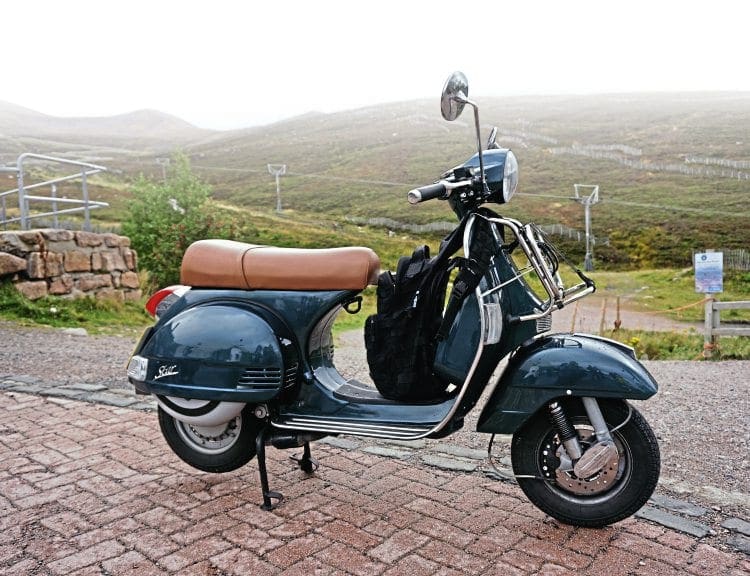 After unloading I start the engine to ride into the garage and it settles into a steady rhythm, ready to be away again. At the outset we asked ‘what could possibly go wrong?’ the answer it seems was very little.

This test set the LML up to fail. It’s a 125 auto designed for commuting, yet it completed every challenge. It’s not perfect but name a scooter that is. In summary, it struggled on inclines while overloaded, the indicator switch is vague and the speedo cable broke. Hardly a catastrophic conclusion. In its favour are fantastic handling and a very easy, quiet ride. I pushed it to its limits and the LML delivered. Even though LML haven’t yet announced a Euro 4 compliant machine we still thought this test was worthwhile. Any future ‘PX’ will probably look similar to the LML auto and there are plenty of attractively priced LMLs on the market.

I’d want to live with any machine for a while before giving it firm approval but if you need a daily ride that’s also used for the odd trip further afield, an LML is certainly worth consideration. Before this trip I viewed LMLs as also-rans — the ‘Almost Vespa’. I was wrong, LMLs are a match for many better known machines. Put aside any prejudice and take a look; you may be surprised at what you find.

During a rally earlier this year, an air leak was found to have caused the dreaded holed piston on Stan’s PX. Despite an on-site rebuild to limp home, once on the dyne it wasn’t good news. Enter the 125 auto: “Would you like to borrow an LML Stan?” 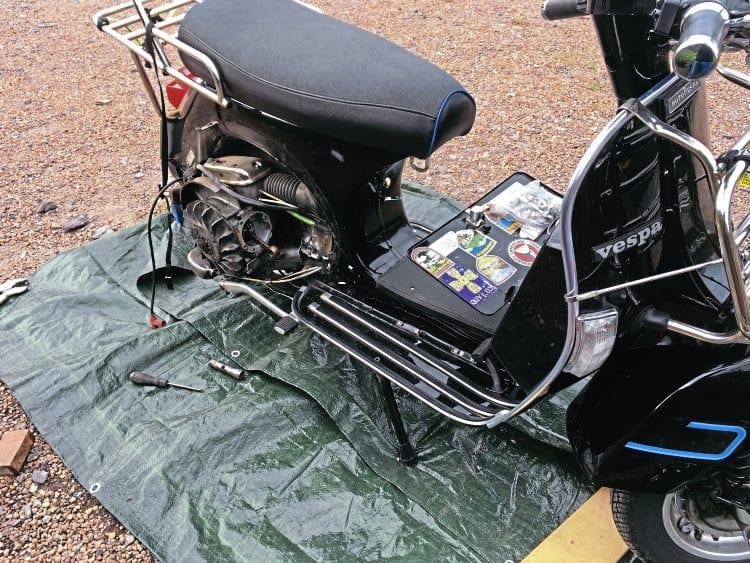 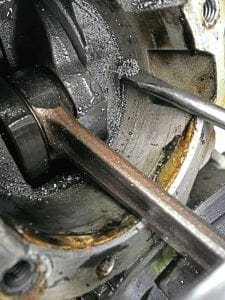 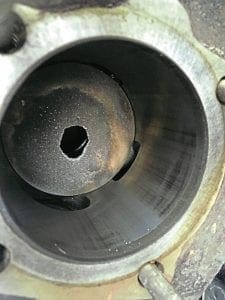 Lohia Machinery Limited is a motorcycle and scooter manufacturer based in Kanpur, India. Its relationship with Piaggio started in 1984, when it signed an agreement to manufacture the P range. This licence expired in 1999, and since then LML has manufactured machines with obvious Vespa heritage.

It’s no secret that for most of this year the supply of both machines and spares has been sporadic. Steve Oliver of LML UK, is keen to reassure riders that these problems are being resolved. “The factory closed this year for retooling and to establish a production line for three-wheel vehicles. This took longer than expected but spares are now arriving in quantity.”

Steve’s also optimistic about a next generation of scooters. “LML already possesses linked braking technology and has identified an emissions compliant carburettor. Some minor issues remain but I’m confident that we’ll see a Euro 4 compliant four-stroke scooter from LML.”

With only one week to go until the impending trip to Aviemore, Stan needed a scooter – the news hit him like a tonne of bricks that he’d be doing the trip on the 125cc LML. 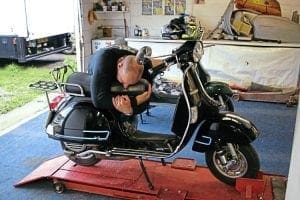 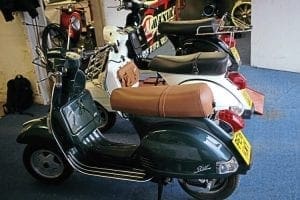 This test demonstrates that scootering need not be an expensive hobby. Whether new or used, LMLs have always been less expensive than their Vespa cousins, quite often by four figures. Unless you’re a lottery winner that’s a lot of money and the difference isn’t necessarily reflected in usability or build quality. It seems the only cloud on the horizon of LML ownership is a consistent availability of spares, particularly for four-stroke models. If that’s now resolved compared to other classic scooters they’re exceptional value.

There’s an active and friendly LML Owners’ group on Facebook that’s an excellent source of advice and tips for both new and potential owners.