There are two types of custom scooter: the all-out show stopper in its clean, sparkly, glittering glory, and the road going custom which has a distinctly used feel about it (and so it should have). Gav’s scooter falls into the latter category, but it was no easy journey getting there.

During the visit he told me about his recent misfortune with his van being stolen, Gav was actually standing in his dad’s driveway opposite his house when he saw the van (his van) screeching up the road. The result was an immediate and crazy police chase to apprehend the thieves. This was closely followed by another story about blowing his scooter engine a week earlier at Santa Pod. I did think at the time… stolen van and a blown engine? How unlucky.

That would be the stomach churning sound of the con rod snapping and then skewering its way through the engine case and freshly ported TS1 cylinder. That was gutting, literally. Not being one to give up easily, Gav unpacked his scooter, herded the wife, dog and kids into the car and off they went to Whitby together.

While Gav was in recovery, I thought the least I could do is crack on with his engine, and after various communications with the crank manufacturer, it was established that this ‘race crank’ was in fact not fit for purpose by their own admission. No shit Sherlock! We received a new uprated crank by way of compensation, but that did little to make good the damaged case and kit.

No point moaning, just crack on is my ethos. I reused the old ignition that Gav had supplied, and when he was well enough he brought the scooter back for a dyno. Unfortunately the ignition Gay had supplied was faulty and we didn’t have sufficient spares on site to remedy the unit, so it was a wasted journey for Gay. I did think as he drove off… knackered ignition? That is unlucky.

Rebuild number 4: With a new pipe, new ignition, welded crank and a fully rebuilt engine this was it. We were there, the engine seemed to be holding up, Gav had fully recovered from Whitby, and he celebrated with a full respray at KB paintshop, they did a lovely job and didn’t seem to encounter any real issues. The scooter was now coming together after this arduous and sometimes harrowing journey.

So that brings us up to date. Gay’s scooter is painted, preened, plucked and primed. It’s now ready to roll and I wish him every success for his sprinting season ahead. As much as I would like to think that Gay’s extensive streak of bad luck is over, I have to laugh and say that I doubt it. But I will add this, during the short time I’ve known Gay, and during all of the above events, not one time have I heard him moan, whine, complain or say ‘woe is me’.

How did you first get into scootering: By mistake.

First scooter: This one.

What would you like to see change at rallies: More child-friendly

Top speed: TBC at the next meeting.

Advice to others: Buy quality bits, avoid eBay, use a decent and reputable engine builder. Cost: Can’t say the missus might read it!

Worst part ever purchased: Allegedly reputable ‘race crank’ and the rod was made of cheese. 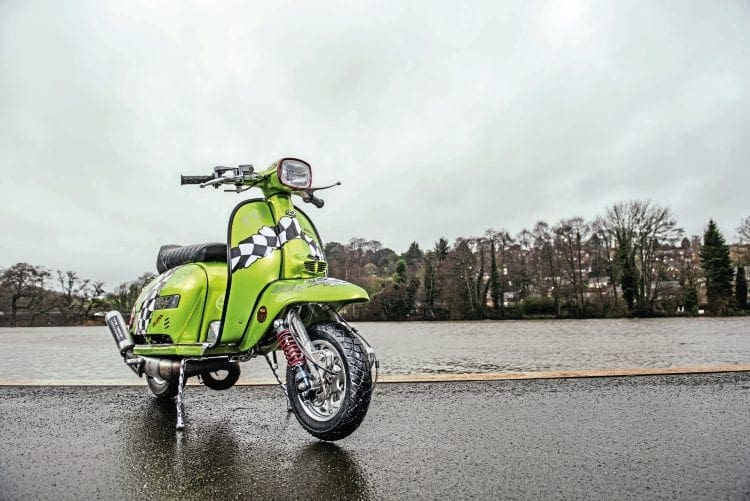