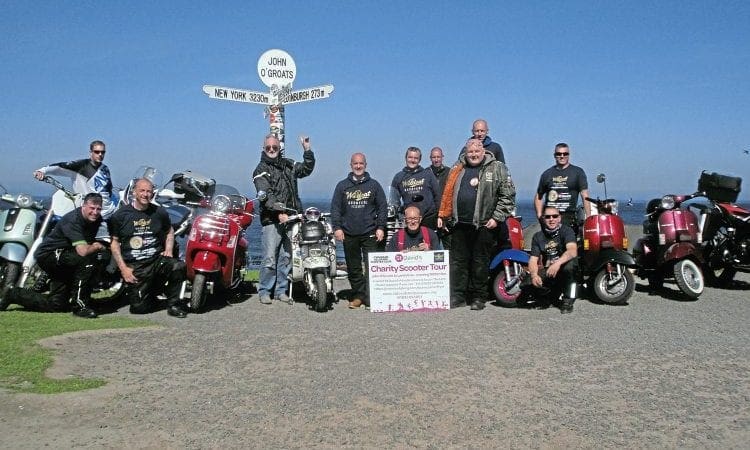 Land’s End to John o’Groats is one of those journeys I’ve never fancied, but for others it’s a must. This month I received not one, but two versions of the same journey, each done for very different reasons, and in very different ways. Tino had a simple desire to ride a weeklong journey with friends through the rolling vistas, while Andy (on a separate mission) wanted to re-live a 1986 road test from Scootering! Both journeys ended up being epic in their own way, read on…

After doing some of the most popular coast-to-coast rides I just had to take part in the classic and popular Land’s End to John o’Groats in the UK. An unmissable opportunity was offered to me by friends at Wildcat Scooters in Newport, Wales. I agreed as it was another chance to ‘live life on the road’ with British scooter friends or rather Welsh scooter friends. The scooter tour was to be a charity run in support of the St David’s Hospice, Newport, hosted by Bobby and Julie from their beautiful home in Newport.

On the Sunday we started to head north. There were 11 of us and a van which was used as a mobile workshop, along with a spare scooter and luggage. The group consisted of Vespas, Scomadi and Lambrettas. We rode through the lovely green landscape of Wales and the A49 was a pleasure on our small wheels. The group travelled in single file between 80 and 105kph which allowed us to easily overtake slower vehicles and not obstruct others. We reached Penrith late evening and without any mechanical problems! Next morning we were back in the saddle with breakfast along the way at a kiosk just a few kilometres from the boarder with Scotland. At the Carlisle border crossing between England and Scotland a souvenir photo was taken. We rode alongside Loch Ness then stopped at the foot of Ben Nevis for supplies. Ben Nevis was claimed in 1956 by a brave Lambretta 150D. Holiday traffic was still prevalent but other road users were very attentive towards us. Next we reached Inverness, the capital of the finest whisky in the world!

In one day we rode to John o’Groats and returned back to Inverness for delicious pork ribs, after which we headed off to the pub where there was Irish folk music with audience participation. Next day we sailed along the A99 in Scotland, the Targa loving the curves and bends in the road. The white houses, hotels, cafes, and pubs of the most northern point of Great Britain welcome you, it is surely one of the most visited places by people on two wheels!

The pole denoting distances between known locations on the globe appeared in the distance inviting us to take a photo. 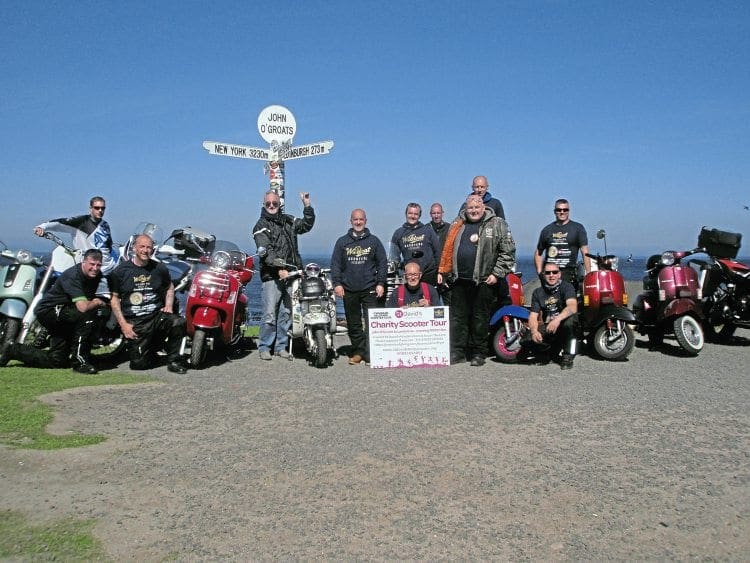 Another notch on our musket for the scooter! Back onto the A9 we headed south. Drumochter Pass is one of the highest passes in Scotland and I must say one of the coldest! We reached Perth then Edinburgh across the Firth of Forth Bridge. A detour was made so we were able to visit the Angel of the North statue near Gateshead. In spite of its size – 20m high and 54m wingspan – it appeared suddenly. After the photo opportunity we headed to Stockton where we spent the night in a cosy hotel.

Back on the road the van followed with our luggage and was always assisting when we needed to join traffic. It proved an indispensable component in enabling us to travel up to 500km a day without waiting time. We stopped every 80-100km for a short break, to check the scooters or have a bite to eat. Heading south on the A1M with Cumbria on our right we headed towards the M5. We were aiming to reach Bath southwest of Bristol by the late afternoon. We stayed in a ‘youth’ hostel, had an evening down the pub, and headed off the next morning. It was raining heavily. Exeter next, then we intended to reach Land’s End in the afternoon.

The rain was like pins on my face, so I tried to protect it with my hand. We eventually reached Land’s End and of course there was another photo opportunity. That night we slept in an apartment for backpackers. 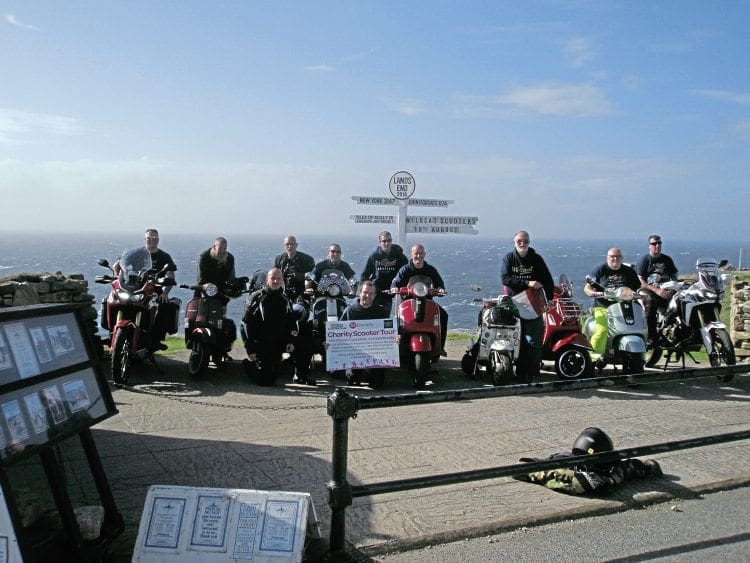 On the final day, with Wildcat Scooters in Newport as our goal, the A30 was congested with holiday traffic returning from Cornwall. We crossed the Severn Bridge ‘sideways’ to use a naval term, because of the strong wind and rain. We reached our goal after seven days and around 3031km.

I appreciate the majestic landscapes and points of interest, but our main goal was to raise money for the hospice and spending a week scootering with friends. The hospitality of Bobby and Julie is impeccable. I returned to Milan the following day with a wealth of new experiences and unforgettable memories.