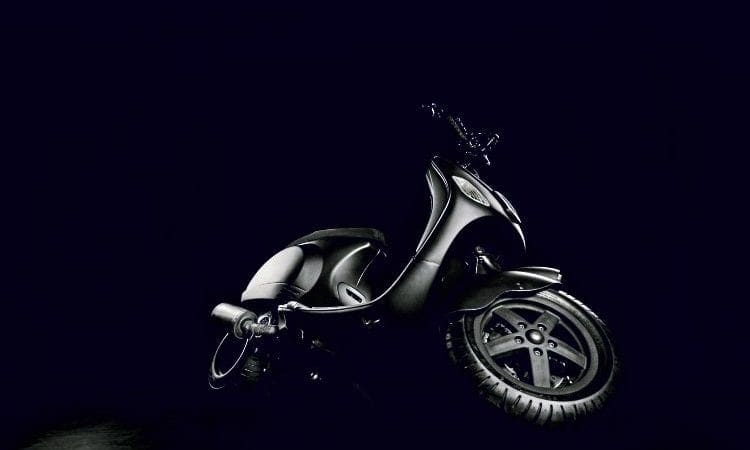 KAONASHI literally means ‘faceless’. It’s a spirit in the Japanese animated film Spirited Away. This character reacts to emotions and ingests others to gain their personality and physical traits.

Regulars of this parish will be aware of a few projects that Scootering has reported on from the mental metal lab that is Butcher Garage. As no doubt you’ll have seen, they always add their own unique ‘twist’ to whatever they do. So when a friend from the Moscow Vespa Club asked them to construct a ‘Honda Zoomer/Ruckus-style custom’ based on a Vespa LX he had in his possession, the cogs in their fertile Frankenstein minds began to click into gear.

Patrons of Butcher Garage have to accept that to get the best out of the chaps there, they are to be given carte blanche to design and build their own interpretation from the rough idea of the customer’s description… or the originally intended plan. Having said that, the chaps are more than collaborative, in the extreme.

In this project, the owner had pretty much described what he expected at the end of the project. He wanted a stretched scoot, as long as the axle of the back wheel became level with the end of the body, consequently the wheelbase went up to a whopping 240mm.

As you can imagine, using a Vespa LX isn’t really the best start for such an exotic idea. For a kick off, a new subframe to hold the motor would need to be built and using a stock shocker would have been impossible. Options had to be created. After some scribbles, squabbles and dead-ends, the suspension from a Ducati Monster 400 came to the rescue.

The body under the seat space had to be altered in two places for the shock absorber mount, as well as adjustments to the fuel tank, so the under-seat compartment was accordingly reduced in size, meaning that it’ll now just about cope with a tool kit and gloves.

The back wheel came from three stock Vespa wheels, bonded together to gain the necessary seven inch width for the new 130/70 rubber to give it that all-important ‘Japanese’ feel. This new configuration meant modifications to the tail to clear the tyre were more than required.

Cosmetics and aesthetics weren’t neglected either. A recessed stoplight was inserted under the repurposed grille from a horn cover. As well as the exhaust manifold, muffler and air filter box being given a complete makeover at the rear.

The front end was given new ‘clubman style’ handlebars (another one-off manufacture) and these totally altered the look and feel from the original LX-style into a more retro/vintage vibe.

Bitubo front shocks were added and the headlight was moved from the head set to the front mudguard and held in a fibreglass mount integrated into it. This creative touch had been inspired by the original Piaggio ‘Paperino’.

It’s about a 50/50 split of the elements that have been painted matt black or powder-coated. The saddle was made from two different kinds of leather by the upholsterer – Aleksandr Torgashev. He’s the chap they usually use for their projects and as usual he has made a class job of it.

Now here’s the rub – Butcher Garage build their projects to order and all are one-offs. Some may be disappointed by this… though the purists among us may consider it a blessed relief, no matter. As long as the chap or chapess who ordered the creation is pleased, then they are happy. I for one would be over the moon if they could concoct something tasty for me.

With Kaonashi being a one-off, then the stretch you see here won’t be available as a kit to grace other LXs, but if your juices have been whetted by it, then toddle over to their website, where they have other cool merchandise available for everyone.