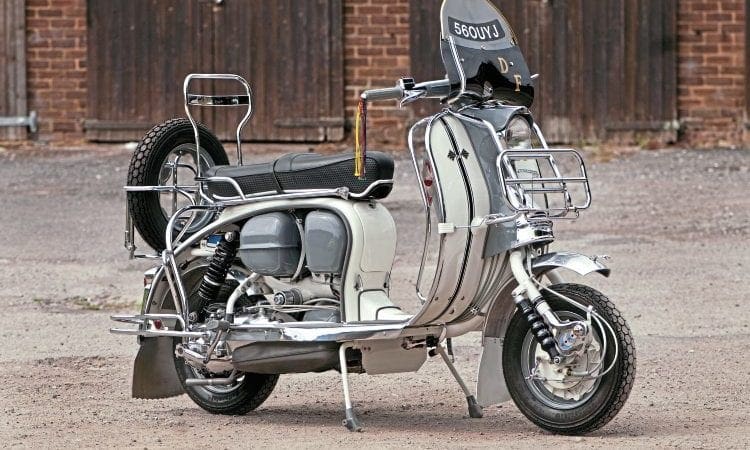 This scooter oozes feeling and delivers the element of non-conformity, which was generated by those sharp-looking kids of the day who were wanting to stand out from the crowd. Dean Fredley’s interest in scooters started when he was just nine years old. Living on the Crackley housing estate in Newcastle-under-Lyme he used to see the teenagers of the day riding round on their late-70’s/ early-80’s Mod revival scooters, and it was the name of this estate, which formed the inspiration for the name of his scooter, ‘Crackly Racer’.

Dean is a professional musician. The group which he plays in is called The Vibe and was previously known as the Liable Vibe back in 1993. The band re-formed in 2018 and has now returned to the scene performing and recording some super jazz-funk tracks.

It’s a fact that Dean’s love of scooters and his passion for smooth tunes is in his DNA, and this has only served to develop and progress his love for the scene. It’s no surprise Dean’s favourite style of scooter is ‘Mod-Style’.

Having obtained the scooter for the project in 2016 Dean began to develop his ideas for the final look of the machine; he openly admits one of the main inspirations behind the final look of ‘Crackley Racer’ was the influence of an aficionado of classic scooters and style, lain Wilkins a.k.a. Arfa Francis.

Dean explained one of his main objectives throughout the build was to be able to blend all the elements of the look he wanted to achieve without overdoing it, and he knew lain would be able to guide him through this process.

To support the look, Dean needed to make sure the paint job he chose would support the overall appearance and period of the scooter. “I had to get the paint spot-on so I commissioned Farout Paint in Congleton to complete the work,” he explained.

However, style, paint and appearance wasn’t the only thing which Dean was interested in. He also wanted to bring performance, power and reliability into the scooter; as we all know that’s not a combination which can always be achieved without a lot of headaches on the way. To deal with the engine set-up Dean chose wisely. He fitted a 185 Gran Turismo unit built by Nathan and Dez (DiscoDez) and performance doesn’t disappoint; it gives out a cruising speed of around 60mph and a top speed of over 75mph.

With all this said and at the back of his mind Dean knew if he was going to make this project work he had to get the main element right: the accessories.

“To deal with the demands on the accessories, which lain is involved with, he ensures all the joints are brazed rather than welded, which gives a little more flexibility. Also before fitting any of the accessories to the ‘project machine’ lain dry-fits them to straight machines of the model, which ensures the parts are neat and correct before being triple chromed in the UK,” he added.

“I knew that with my ever increasing desire to achieve the correct look, and after nearly 60 years of being out of production, original items were becoming super rare and incredibly difficult to source, but I was in safe hands with lain. He has a vast collection of original bolt-on accessories and he also has the ability to replicate most items using the same old-school methods employed by the original manufacturers,” Dean explained.

During the build process Dean openly admitted he caught a “collector’s disease/obsession kind of illness”.

“I needed to be careful and I had to manage things sensibly because it’s easy for things to start getting out of hand; everything can end up looking a jumble. The planning of the combination of the accessories needed to be managed responsibly.”

Looking at the front of the scooter the flyscreen sports Dean’s initials and the Ulma horncast embellisher sits behind a period front-rack carrier.

The registration number appears on the scooter three times, but the way it’s been positioned complements the era and the feel of the scooter, and it correlates harmoniously with the adjustments the teenagers of the day were making to their machines.

The legshield embellishers with gems on are a particular favourite of mine, and the Ulma fork boots complement the Nannuci front mudguard, which has a Jaguar badge. The original 60s Biemme handlebar tassels support the classic mod look and the accessories embracing the rear of the scooter work in perfect synchronisation with each other.

The Rimini Lambretta Pegasus seat is embraced by an Ulma back rest, which also extends along the sides of the seat and the Ulma rear ‘jug-handled’ crash bars lead down over the Nannuci rear mudguard to the rear ‘Florida bars’ and Fiam footboard extensions.

For the time being, Dean’s chosen to keep the side panels off the scooter. You could be forgiven for thinking the removal of the sidepanels would conflict with the classic Mod — look and you’d be right; but that’s the point.

It’s a ‘late-Mod style scooter that reflects the element of non-conformity which existed at that time when kids were looking for different ideas that would make them stand out from the crowd, and it again aligns the appearance of ‘Crackley Racer’ perfectly to the machines of that period.

You don’t have to be a rocket scientist to know that taking the sidepanels off a scooter reveals the engine compartment, which can sometimes open up a wide range of unsightly issues. However, Dean’s thought about this, and has kept things neat and tidy without wires or cables hanging out all over the place.

Also, the grey tool box and grey petrol tank complement the grey horncasting and grey after-market inner legshield toolbox, which keeps the overall appearance and flow of the theme of the scooter moving. The Ulma rear rack/spare wheel carrier is finished off with a Stoke-on-Trent royal enamel badge, and the parting-shot from Dean’s choice of accessories is a classic Vigano number plate/light surround with a period GB mud flap.

Mod-themed scooters have been with us for more than 50 years, and most of us are victim to the idea they should be dripping with lights and mirrors. With the development of this scooter Dean and lain have helped change that stereotype. Sourcing some of the original accessories wasn’t easy but Dean enjoyed every minute of it, and he’s taken his passion for music and scooters and delivered that in a scooter, which doesn’t conform to the traditional stereotypes, but blends style, class and looks to perfection.

Name: Dean Fradley
Job: Professional musician
Scooter club & town: Just ride with mates.
When did you first become interested in scooters: From about the age of nine when the mods of 1979/80 were knocking about.

Name of scooter: ‘Crackley Racer’
Reason: Crackley is the council estate where I’m originally from and it’s where I used to see mods/scooters boys in the late-70s to early-80s.
Scooter model: Lambretta Series 1 LI 150.
Date purchased: July 2016.
Inspiration for project: Iain Wilkins a.k.a. ‘Arfa Francis’ on Facebook and his album page ‘The In Crowd’.
Time to build: Just over 12 months.
Built by who: Myself.

Has the scooter won any show trophies: Won ‘Best Mod Scooter’ Buckingham Palace Scooter Run 2018.
Engine: Gran Turismo, which was already done by (Discodez) Nathan and Dez, and is very fast!
Paintwork: ‘Farout Paint’, Congleton and then final ideas from Iain Wilkins.
What was the hardest part of the project: Sourcing some of the original accessories wasn’t easy.
Is there anyone you wish to thank: Iain Wilkins for supplying some of the accessories and his support throughout. Lee Maxey a.k.a. O C Lee for his inspiration on how to keep your scoot immaculate and not missing out any small details. Dave Holford for giving me the original accessories collector’s disease/obsession kinda illness.